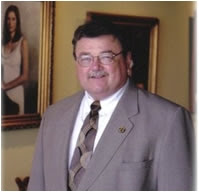 Athens, Alabama is one of those rare close knit communities full of folks always happy to make room for one (or one hundred) more at the dinner table.

Despite the ever growing population and expanding enterprise in this friendly city, Athens has still managed to maintain the hometown feel and is quick to adopt into our family any and all newcomers who decide to make their home here.

Still, among the fold, one would be hard pressed to find anyone who knows Athens better than its own mayor, Dan Williams.

Mayor Williams was born and raised in Athens and though he’s had ample opportunities to see the world, Athens is the only place he has ever truly called home. I asked Mayor Williams recently if he would speak with me a little about the simpler times around his southern table growing up. As always, speaking with Mayor Williams is as easy and relaxed as sitting on the front porch with lifelong neighbor. His answers painted such a vivid picture in my mind, I almost felt as if I had grown up with him. In truth, his story is not very different from that of any other southerner during that time, but it bears repeating as there is still a lesson to be learned for all of us. It often takes a change of pace to fully enjoy our everyday blessings.

Mayor Williams’ mother, Mrs. Williams, lived to be 92 years of age. Most of her recipes are lost now, because like the majority of great southern home cooks of her time, she never had cause to keep them written down. Each dish had been taught by example and learned by heart. If anyone ever did request a recipe she would take time right then to sit down and write it out for them. The only cookbooks she owned were purchased from school fund raisings or church groups.

Mealtime was informal but traditional for country folks. The entire family sat down together at the dinner table. Hats were not allowed to be worn per custom and there was no television to watch. Instead, the meal was begun with a blessing said by Mr. Williams or one of the children followed by a dinner full of jovial conversation. “Mealtime was always a happy, positive time for our family, and never a quiet time. My daddy was a Southern Gospel quartet man and my mama played piano for the quartet. Sometimes, we all broke out singing.”

Mrs. Williams was an excellent cook by all accounts and never got flustered in the kitchen regardless of how many guests were to be at her table, how much time she had to prepare the meal, or how little food was available. With typical breakfasts consisting of bacon or sausage, biscuits and gravy, grits, and eggs cooked to order, she always turned out a great meal. One of their favorites for breakfast was maple syrup with butter whipped into it, slathered on fresh biscuits. “I remember one time my Mama made 85 biscuits for my brother and seven of his ninth grade classmates for breakfast. They ate them all”.

It is no wonder that most of Mrs. William’s meals drew additional kinfolk or other guests from the community. The visiting preacher was always invited during revivals and each year the preachers would happily recall the pleasures of dining at the William’s table in previous visits.

With carbonated beverages or “cold drinks” reserved for special outings, milk and sweet tea were the drinks of choice. “We had a cow and drank a lot of milk. Whenever the cow had been in the onions or bitterweed, we would always take a bite of an onion before drinking the milk, then you couldn’t taste the onion in the milk.”

Lunches were kept light, with breakfast and dinner being the main meals. Still, summertime lunches often consisted of thick tomato slices on bread with mayonnaise, salt and pepper. “It wasn’t good unless the juice from the sandwich ran down your arms and dripped off your elbows.”

The Williams, being a typical southern family, reserved the biggest and best meal for Sunday dinner. “My Mama was always in the kitchen early on Sunday, but she was cooking for lunch rather than breakfast. Sunday lunch was the big meal of the week. We would always eat at our house or my Mama’s sister’s house. The favorite meal for Sunday was roast beef, rice, and gravy. That was the basic lunch, which we called Sunday dinner, and it was supplemented with fried corn, butterbeans or green beans, mashed potatoes, sliced tomatoes, dill pickles, sliced onions, cornbread and rolls, Italian salad, macaroni and cheese, slaw, and an abundance of other selections. A typical Sunday lunch during these days would include at least a dozen or more folks.”

The extended family frequently gathered together under one roof for a “huge family dinner” which was hosted either at the Williams’ house or an aunt, uncle, or grandmother’s home. Family reunions were held the first Sunday in August, which was the birthday of Mayor Williams’ grandmother. “My Daddy and uncle would dig a pit, stretch hog wire over it, for a barbecue pit. Buford and George Hardy, friends of our family, would come and barbecue a whole hog during Saturday and Saturday night. We would get to stay up as late as we could to watch the meat preparations. The barbecue was served on Sunday afternoon with chicken stew and all the food the family and neighbors could bring in to tables set up in the yard. After dinner, my Dad and his brothers would get out their brass horns and instruments and play for the guests.”

“The prized food during my growing up years was the pulley bone from the fried chicken at any meal. My Mama always let one of us kids get it, and my older brother Bobby and I would literally fight over it. Deviled eggs were a delicacy for us. Homemade ice cream was also a favorite at our house. My Daddy would even make it in the middle of winter, and we would sit around the stove to keep warm while eating ice cream. I also liked a cornbread hoecake or flapjack with molasses or syrup over it. I always thought that was pancakes. My Mama also made wonderful coconut cakes and lemon ice box pies. I remember her carrying us blackberry picking, then making the blackberry cobbler for lunch or supper. Cornbread and milk has always been a favorite at our house for a quick supper”

Williams recalls his youth as a fun time, even though there was a great deal more work required of he and his siblings than is asked of kids nowadays. They had huge gardens and “truck patches” to raise their own food. His mother and sisters would work alongside cousins and other relatives to can food for the winter months and later when refrigeration became readily available, to put up vegetables and fruits by freezing them. Beef and pork were always plentiful thanks to the boys raising and caring for hogs and cows throughout the year.

Such images of the past bear little resemblance to today’s methods of gathering food or preparing a meal. With super centers and fast food restaurants on every corner, mealtime in today’s south is just a short drive and paper bag away, but Mayor Williams’ memories speak to simpler times and place a renewed value on the family table.

“As Mayor of Athens, and during military service, I have been fortunate to have opportunity to travel to other places in our nation, and other countries. I have experienced a wide variety of foods in the world that were extremely different from the food of my childhood. Most of it was tasted good to me, and I was always amazed at how alike families are all over the world regarding their food habits. In the countries of the Orient it seemed that all the food was raw compared to our food here. But I noticed the folks there enjoyed it as much as I enjoyed my Mama’s biscuits. I have learned to enjoy a lot of food that is totally differ
ent from that on which I was raised. But there was something about my Mama’s cooking that seems to be lacking in the foods in today’s restaurants, and occasionally a taste or smell will immediately take my mind back sixty years to that round pedestal table where my big brother, my little sister, and I ate the best food in the world.”

Thanks for the great post! I grew up near Athens and actually went to church at First Baptist with Dan and his kids. Great article!

I have been LOVING the site! Between you and http://www.thepioneerwoman.com I can always find a great recipe!

Thanks and keep up the great work!

Hey Debra!!
First of all, WELCOME TO SOUTHERN PLATE!!!

I’m so glad you’re here! I’m equally glad this brings back sweet memories for you. My original intent (which is still part of my intent now) was to preserve and teach those southern recipes which are lost or nearly lost to today’s generations.

In this spirit (and after emailing you to make sure we were talking about the same cake), I’m emailing you the Texas Cake recipe right now!!!
I will do a tutorial and full post on it soon!
Christy
P.S. Weeeeeeeeeeeeeeeeeeeeeee! If you have anymore recipes you are missing, just give me a holler and I may have them!

Oh I am SO homesick now! I live out in the Mid-west after growing up in the South and the cooking is NOT the same. I was the tomboy in the family of 5 girls so I was out with my Dad and missed my Mom’s cooking lessons. I have been married 10 yrs, but never lived near my mom since I got married. When I call her for a recipe, she cannot give it to me except with the directions of a pinch of that and a dash of this. Oh it is so sad! I wish I would have paid attention more! My grandma has passed away and every Christmas I miss her nut bread, her doe eyes, and her Texas Cake. I cannot find recipes that even come close.

Thanks for the walk down memory lane. I hope to re-create these scenes for my 5 children.

What a great article. Definitely makes me homesick for GA and the days during the summer I’d spend with my grandparents. How I’d give anything to go back and tell my younger self to pay more attention while my nanny was in the kitchen AND out in the garden!