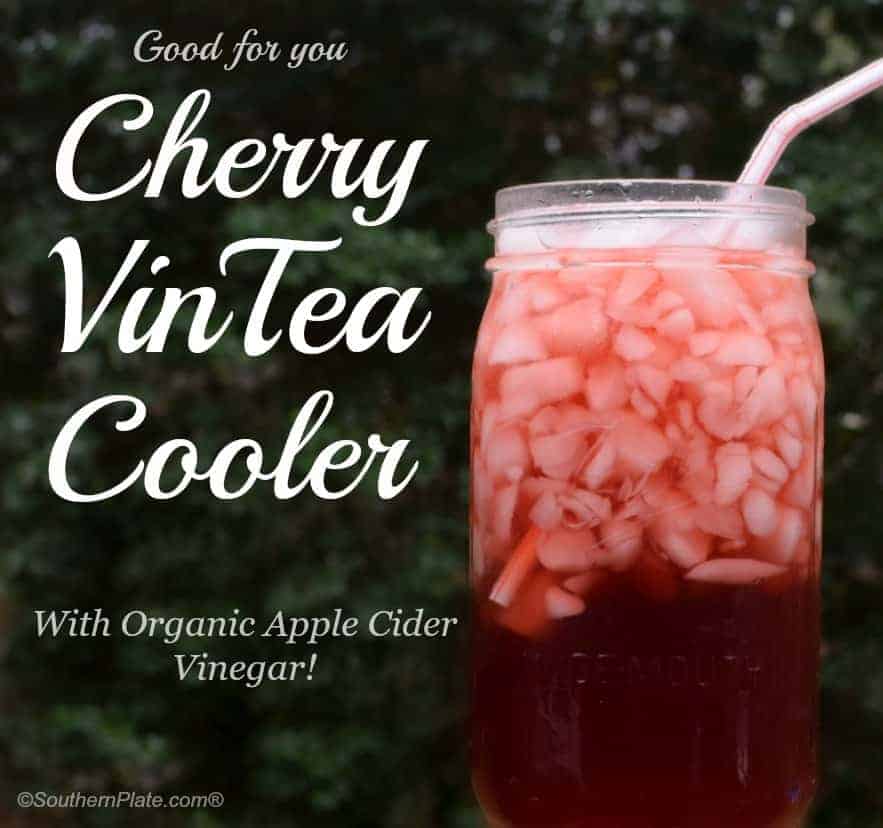 In this post I’m going to show you how to make Cherry VinTea Cooler: a healthy, delicious, and refreshing drink using apple cider vinegar, that tastes surprisingly like a Snapple!

I’ve taken up a lot of habits in my lifetime, some of them have even been worthwhile! Today I’m going to share with you a new habit of mine that I’ve been doing regularly for about a month now: Drinking Apple Cider Vinegar (ACV).

Now don’t go scrunching up your face. This is old time medicine according to my grandparents. Folks have been doing it for ages, all the way back to Hippocrates, who considered ACV to be medicine and used it to treat ailments.

This is just one of the ACV drinks I’ve been drinking lately but folks on Instagram said they’d like some of my recipes so I’m starting here. I decided to call it VinTea because it is a Vinegar based Tea drink that just makes your taste buds sing. Think of what a splash of lemon juice does to a drink and you’ll understand the effect you get by adding ACV, they do pretty much the same thing but with slightly different flavors. I have other VinTeas I may bring you later on but this is one my husband enjoys as much as I do so it’s a good start.

There have been several studies showing the benefits of ACV, just do a quick internet search to find dozens. Some have shown it helps contribute to weight loss, others have proven that it regulates blood sugar when taken with or before a meal. For me, personally, I can tell you that these drinks have helped me curb my desire for junk food and cokes (which is Alabama for all carbonated beverages). Use that good kind with the “mother” at the bottom (Braggs is my favorite) and you’re getting a powerful dose of probiotics with every sip. I can use any of these reasons and more to encourage you to drink it, but today’s reason is that this Cherry VinTea is absolutely delicious!

I’ll start in on the recipe in just a second but I need to update y’all on a few goings on in my life first. If you’d like just the recipe, jump ahead to the next picture now and start there.

You’re still here? Well goodness, thank you, I sure do appreciate it! Let’s chat!

This is spring break for my kids. What does that mean? Well, pretty much that they don’t have school and that’s about it. Now how they use that time, well that is up to them. Katy and her friend, Sara Jane, have been busy blowing bubbles, playing dolls, drawing with sidewalk chalk, and today they are starting an online computer programming class.

Brady has been practicing his snare. He starts in the house and then when I need a break from it, he heads out into the yard for a bit. Eventually, though, he comes back in because he is afraid our neighbors will mistake his constant drumming for machine gun fire and think the neighborhood is under siege. See what a considerate young man I’m raising?

Many of you have been following our ordeal of losing our dog and, literally, thousands rejoiced with us when she came back last Friday so I thought I’d share that news here in case any of you didn’t know.

This past Friday, my husband went to take the dogs out (yes, we have an extra dog now, more on that in a minute). As soon as he opened the door, Sweetie rushed up the back stairs and into the house. He yelled “SWEETIE’S BACK!”. I was sitting in another room at my computer and I just froze, because for nearly two weeks I had held my breath every morning hoping he would say that, so part of me thought I was imagining it.

Then, I heard it a second time “SWEETIE IS BACK! SHE’S HERE”. I heard her little paws clicking on the floor as she ran in search of me and then a tiny black figure burst into my lap. There was a moment of disbelief even then, but such joy at the same time! This sweet puppy, that I had prayed over, fretted over, went through so many possible scenarios in my mind over what could have happened to her, and just begged God to keep her safe no matter where she was, was back.

Our entire house erupted with joy, even from the “new guy”. Sweetie was even affectionate with the whole family, licking faces and wagging her tail. This isn’t her usual behavior. She is affectionate with me but pretty reserved when it comes to everyone else.

We have a special bond because I am the one who went and picked her up from the vet after she was rescued from a puppy mill. At that point, she had never been petted or loved on. She would go completely stiff and look terrified if you even reached to touch her. For the first several weeks, it was just me and her here (with our other dog, Zoey, of course) and I would sit in a chair near her crate and work on my computer, speaking softly and reassuringly to her throughout the day. After about the first week, she came up and sat beside me one day. I let her sit there for a few minutes and then reached down to pet her. WHOOSH she was gone, back into her crate. The next day, she came up again. I didn’t try to pet her but just let her sit beside me, up against my leg as I worked and talked to her. She and I did that dance for a few days until she finally let me pet her without running off. By the second week, she was actually enjoying being loved on and from there this dog has made a remarkable turnaround into being one of the most affectionate pups I have as far as I’m concerned.

Well now, she’s like that with everyone, not just me. Even if she wasn’t though, we’re still thrilled to have her back. It really does feel like the prodigal dog returned!

I took her to the vet and found that what I thought was a rash on her stomach is severe bruising, but her bloodwork was fine and she has no broken bones or signs of pain. Still, under the vet’s suggestion we are giving her an antibiotic and pain pill for a bit just as a precaution. Poor baby was gone twelve days and we may never know what happened to our Sweetie but I can confidently say that everyone involved is glad she’s home!

And now for the other guy… Pick. During one of my many trips to Animal Control to look for Sweetie, this little charmer caught my eye. I took a video of him and came home to post it on my Facebook wall in hopes of someone going and adopting him (you can see it by clicking here). Well wouldn’t you know it, I just couldn’t get him off my mind and so the next morning I told Katy “I think we should go get that dog and foster him. We can let him live here while we see about finding him a home.”

Katy was all for it and we immediately agreed that “Pick” was his name due to the “Pick me Pick me Pick me!” dance he was doing the day before when we met him (in that video).

Of course, Pick did not seem the least bit surprised when we showed up. I believe he knew that he was going to be our dog the moment he saw us. We brought him home and he immediately charmed every single member of our family. Even Brady, who isn’t much of a dog person, kept saying “Ma, I love this dog! We have GOT to keep this dog!”. When Ricky came home, Pick ran to the door in excitement and did his little “Pick Me” dance until Ricky picked him up, where he covered his face with doggie kisses and wagged his tail. Keep in mind, this was the first time Pick had ever met Ricky! My poor husband never stood a chance.

You can see photos of Pick, Sweetie, and our happy little family all reunited again on my Instagram by clicking here if you’d like.

Sweetie was surprised at meeting Pick the first time and she’s made sure he knows the pecking order, but Pick is perfectly happy with that and he and Sweetie have become friends. Zoey welcomed him to the family by giving him a bath (she is our little mother hen dog and bathes every animal in this house, including the cats), and we are all settled in together, everyone home where they need to be, with one more little soul to love.

I’m so grateful for them all, and especially for you and all of your prayers, understanding, and encouragement while we searched for our missing Sweetie.

And Now, as promised, my VinTea recipe! 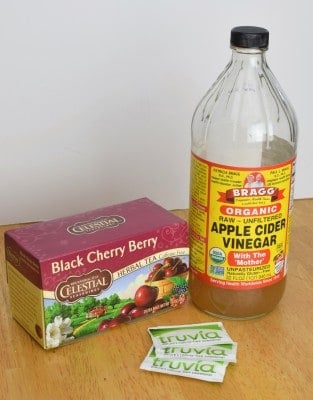 To begin with, you need Apple Cider Vinegar (preferably this brand)*, Black Cherry Berry Tea (all the grocery stores I have checked have it), and sweetener. I am using Truvia but you can use Splenda, sugar, or even honey if you like.

*I have found Bragg’s at Krogers and Walmart. It is getting to be pretty mainstream now so you should be able to find it near you. I pay about $5 for this bottle and a bottle lasts me about two weeks with heavy drinking. ~giggles~ Hey y’all, look at me, I’m a heavy drinker! hee hee. 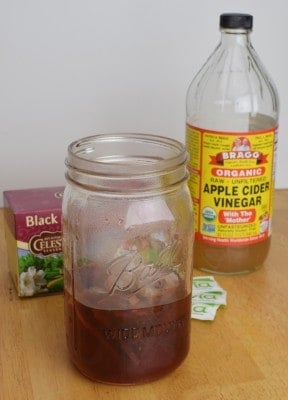 Place two tea bags in a quart jar or coffee cup and pour about a cup or a cup and a half of hot hot water over them. Allow to steep for a good bit, about fifteen minutes. You want this stuff strong!

I just start out with a quart jar because it has plenty of room for me to add ice and my other ingredients, then fill it up the rest of the way with water. Stick a straw in and you’re good to go!

Plus, quart jars are cheap, easy to find, and have a multitude of uses so I always feel like canning jars are a great investment. 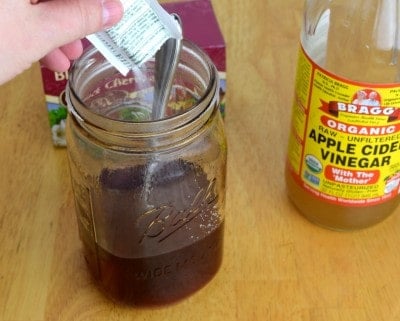 After it has brewed toss out your bags and add your sweetener. We want to add this while it is warm because some sweeteners are not as easily dissolved as others. 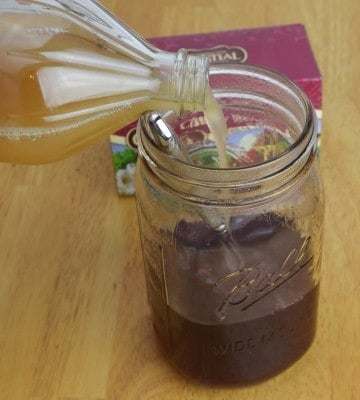 Add in your Apple Cider Vinegar.

I’m just adding about two tablespoons, or two good splashes if you will. You can add less or more depending on your tastes but I wouldn’t start out with more than two tablespoons in a quart jar. You don’t want it to taste like you’re drinking Easter egg dye. Don’t worry!! It won’t!!! Seriously!! Oh man, now I’ve just made some you panic. Hang in there, be brave, be strong, be adventurous with me.

This drink is delicious. Honest! 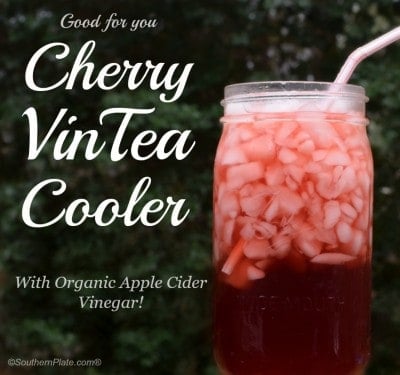 Now, fill your glass up with ice (some of it will melt), add water to get it to the top, pop in a straw and enjoy your VinTea!

A good for you drink that is refreshing, delicious, and tastes surprisingly like a Snapple!
Print Recipe Pin Recipe

“I don’t mean to interrupt people. I just randomly remember things and get really excited!”

You might also enjoy this recipe! Apple Orchard Snack Cake