FINALLY I can tell you! Check out the press release below for my big news. I’m out in Los Angeles filming a WONDERFUL new series that is exciting, heartwarming, and entertaining from start to finish. It debuts August 23rd on GSN and I can’t wait for you to see it! Press release, details, and some random pics from the set below 🙂 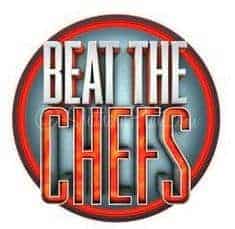 NEW ORIGINAL SERIES THAT PITS AMATEUR COOKS AGAINST THE PROS,

Host Matt Rogers will be joined by

BEAT THE CHEFS is an hour-long show, in which everyday people who love to cook set out to prove that their family recipes are worth prize money and bragging rights.  Each week, the show pits homegrown talents against three professional chefs as they cook the same dish—from firehouse chili to Grandma’s famous chicken and dumplings—with one question in mind: Whose tastes the best?  A panel of critics will judge and decide if the amateurs can “beat the chefs.”  Hosted by American Idol finalist Matt Rogers (“Coming Home,”)  BEAT THE CHEFS is produced by RelativityREAL, with Tom Forman (“Extreme Makeover: Home Edition”) and Brian A. Veskosky (“Deal or No Deal,” “Don’t Forget the Lyrics,” “Fear Factor”) serving as Executive Producers.

The BEAT THE CHEFS cast members include:

The host of BEAT THE CHEFS is Matt Rogers, a finalist on the third season of “American Idol.” He is continuing his country music career, where he has been performing with various artists including James Aldean, Luke Bryan, and Granger Smith.  Rogers has hosted “Coming Home” for Lifetime and “There Goes the Neighborhood” for CBS.   He served as co-host for “American Idol Extra” and served as a correspondent on several sports and entertainment shows, including “The Best Damn Sports Show Period,” “Access Hollywood,” and “Entertainment Tonight.” Rogers also appeared on the ‘Idols’ edition of FAMILY FEUD.

Known for his victory over Bobby Flay on “Iron Chef America” and as co-host of “Worst Cooks in America,” Beau MacMillan is executive chef of Elements restaurant at The Sanctuary resort in Arizona, named one of the “Top 100 Restaurants in America” by Gourmet.  MacMillan trained at the prestigious Johnson & Wales University and is acclaimed for his distinctive style, using the freshest ingredients to create American food with Asian accents.

Chef Antonia Lofaso is familiar to foodies as a fierce competitor and favorite on “Top Chef” and a finalist on “Top Chef All-Stars.”  After graduating from the French Culinary Institute in New York City, she began her career at Wolfgang Puck’s famed Spago in Beverly Hills and later went on to run the kitchen at Los Angeles hot spot Foxtail.  She currently serves as consulting chef for Black Market Liquor Bar in Studio City, California.  Her first book, The Busy Mom’s Cookbook, will be released in August 2012.

Chef Jeff Henderson was the first African-American executive chef at the Bellagio in Las Vegas, a sought-after public speaker and author of the New York Times bestselling memoir Cooked.  A former at-risk youth who turned his life around after discovering his talent for cooking, Henderson has proven to be an inspiration to others.  After apprenticing with renowned chef Robert Gadsby, he worked his way up through 5-star restaurants around the country, including the Hotel Bel-Air and L’Ermitage Beverly Hills, before landing at the 5-diamond Bellagio hotel in Las Vegas.  He will open his own restaurant in Los Angeles in 2013.

Renowned food and travel journalist Brad A. Johnson is the only critic in America to win both the James Beard Award and the Cordon Bleu World Food Media Award for restaurant criticism.  A global traveler with a refined palate, Johnson has visited every continent in search of the world’s finest cuisine, from the Michelin starred restaurants of Paris and Milan to the backstreets of Bangkok and the rainforest of Bali.

Christy Jordan, a ninth-generation Alabamian, publishes SouthernPlate.com, a web site dedicated to classic Southern recipes and quick and easy family favorites. She is also a contributing editor of Taste of the South magazine. Her first book, Southern Plate: Classic Comfort Food That Makes Everyone Feel Like Family, features the recipes she grew up with along with heartwarming stories of family and values that she has come to be known for.  Jordan attended the University of North Alabama, where she earned her Bachelor of Science degree in Home Economics.

BEAT THE CHEFS resident judges Johnson and Jordan will be joined by a celebrity guest judge each week, including Academy Award® Nominee and star of The Dark Knight,  Eric Roberts;  television personality, author and former host of OWN’s “Big Bowl of Love,” Cristina Ferrare;  Julie Powell,  author of Julie & Julia: 365 Days, 524 Recipes, 1 Tiny Apartment Kitchen; and Melissa Rycroft, a finalist on ABC’s “Dancing with the Stars” and correspondent for “Good Morning America” and “Entertainment Tonight.” 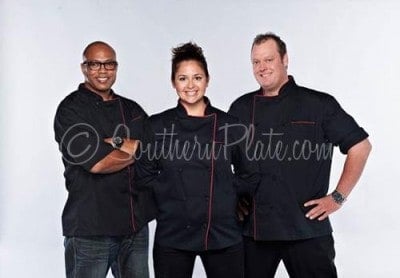 ~End of Press Release, Beginning of me talking with you 🙂 ~

This is one of the most amazing groups of people I could ever hope to work with, seriously! Everyone on the crew from producers, directors, to production assistants, makeup artists, and camera guys are so positive and sweet and I’ve never seen folks work so hard with no complaining whatsoever! They’re absolutely awesome and I am so very blessed to be able to work with folks of this caliber.

Below are just a few snapshots from the set. It’s difficult for me to get too many photos because I go in early and get right into makeup and then from there the day just kind of goes on until filming wraps for the day sometime around seven or eight at night. Most of these are ones folks snapped for me while we were switching out the set and had a quick minute but I’ll try to share more with you on my Facebook page as I’m able 🙂 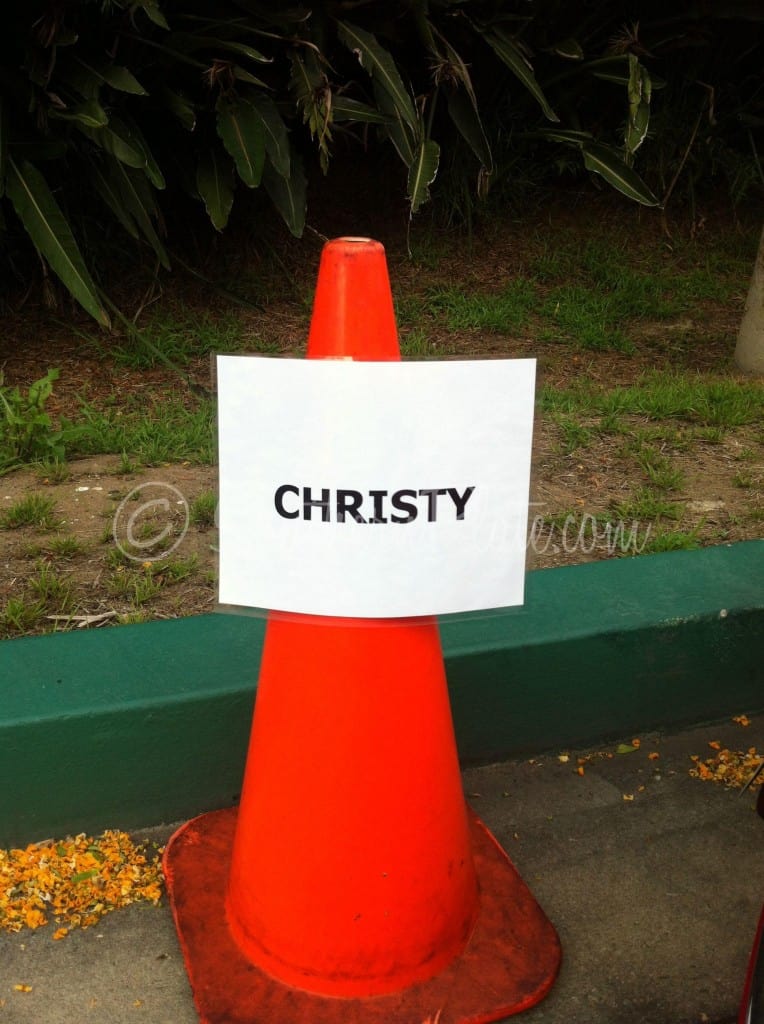 First of all, yes, I am big time now because I have my own parking spot – as denoted by this cone 🙂

Of course, it would make me seem like more of a big deal if I hadn’t of squealed when I saw it and immediately taken a photograph but hey, I’m keeping it real. 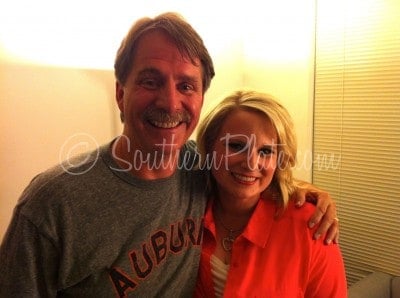 Oh! and you remember that show in the press release American Bible Challenge? It debuts an hour before our show does and Jeff Foxworthy is the host. Well they’re filming it here right now as well, on the set next to ours! Met him tonight and he is just as nice as the day is long. We talked about tomato sandwiches and how much it is killing us that tomatoes are coming in so wonderfully ripe now but we’re to far away from our gardens to enjoy them! 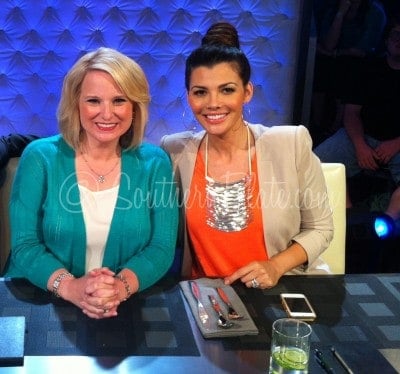 In all of these photos you’ll notice my fellow judge, Brad A Johnson is cut out. That is because he has never before let an image of him be seen publicly and we’ll do the big reveal when the show premiers on August 23rd. At that point I’ll start showing you more pics from behind the scenes that include Brad. Right now I’m having to hold back a lot of pictures because Brad is in them. He’s a great guy and I’ve really enjoyed getting to work alongside him.

This is me and Ali Landry. She is a complete and total sweetheart and was just a joy to get to spend the day with. 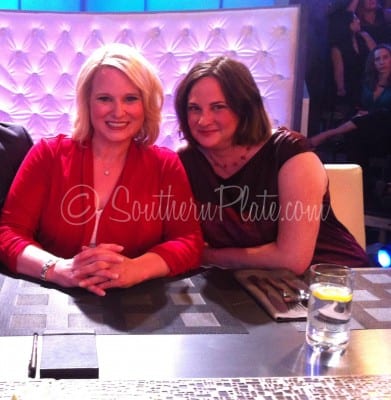 Julie Powell of Julie and Julia fame. Super sharp person when it comes to food and extremely gracious! Another joy! 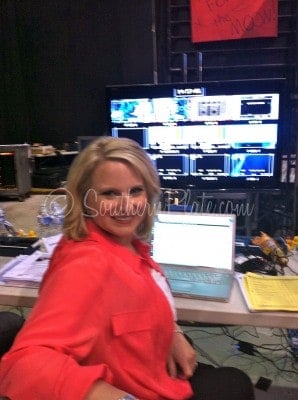 This is me looking like I’m important at the control panel. 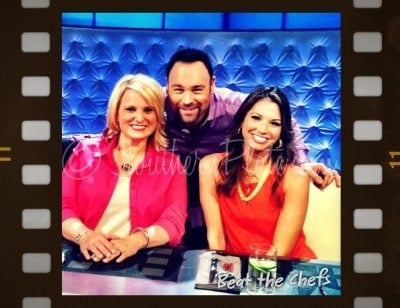 This is me, Matt Rogers, and Melissa Rycroft.

Matt is the host and just a wonderful person, amazing husband, and awesome father.

Melissa was the sweetest person and we enjoyed chatting all day long! 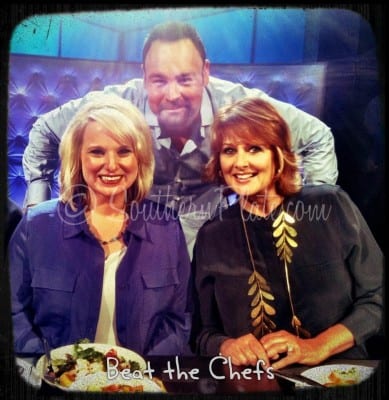 This is me, Matt, and  Cristina Ferrare

It was a HUGE thrill to get to meet her and she did not disappoint. She is as kind and fun in person as you’d imagine!

Matt Rogers is a truly gifted person when it comes to hosting shows. He is able to engage the audience, keep it fun for folks, and do a class A job, but here is the truth about Matt…

We have to sit on set the entire time in front of the cameras but Matt only has to be on stage when he is talking. The rest of the time, he is over at the food table eating gummy bears. Seriously.

Doing what we do, we often find ourselves very hungry but unable to do anything about it. Matt’s response is always “Well I can bring you some gummy bears if you want…”

One day he fixed us a plate all by himself…here it is, lol. 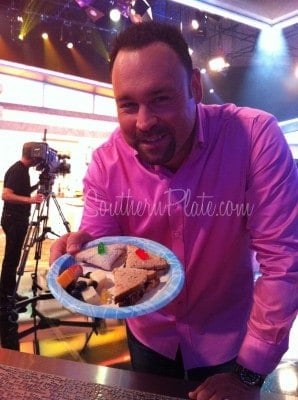 Note the gummy bears on top of pb&j squares, lol. 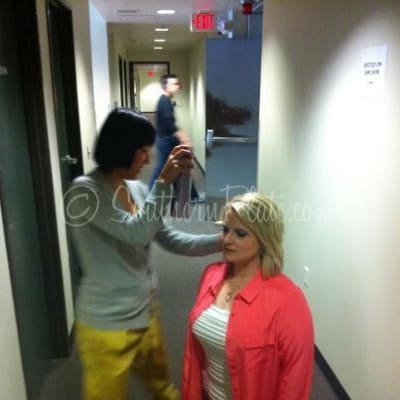 Oh my glamorous life! Tamami is doing my hair and I needed last minute hair spray right before going on stage.

She’s vertically challenged so I made it easy for her.

She said “Oh my goodness you don’t have to kneel!!” Like I was somebody! Lol!
I told her “Look I’m a mama, I’m always getting down on the floor to play with kids anyway.” 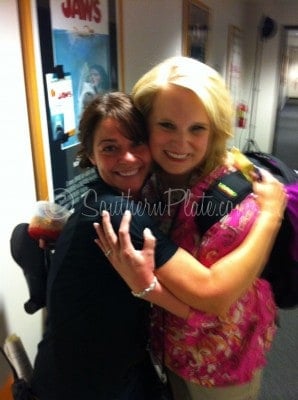 This is the ever sweet, always bubbly, and hard working Cassie. No idea how we’d do it without her! 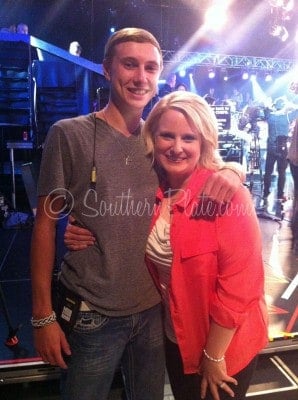 And this is sweet Justin. Bless his heart, he has to keep up with me. Whenever I’m not on set he has to know where I am in case they need me on set in a hurry, so he does a lot of following me around – and I don’t stay in one place very long!

He is such a good natured person though and would just jump through hoops of fire if you asked him!

That’s all for now! I’ve got to get some sleep because I get up at 4:30 to get ready for filming. I have three more days of filming this season and then I head home to my sweet sweet Alabama and my family, whom I’ve missed more than I could ever say.

After the first day here I said “God, you’re going to have to get me busy because I don’t know if I can handle being away from them.” and BOY did He ever deliver! This is very gratifying work though and I know the finished product will be wonderful. I can’t wait for you to see it August 23rd on GSN!

Thank you for letting me share all of this with you and most importantly, thank you for being a part of my life! I’ll try to post more snapshots later this week!

Howdy, i read your blog from time to time and
i own a similar one and i was just curious if you get a lot of spam responses?

If so how do you protect against it, any plugin or anything you can advise?
I get so much lately it’s driving me insane so any support is very much appreciated.