Home » That Time I Accidentally Stole A Car 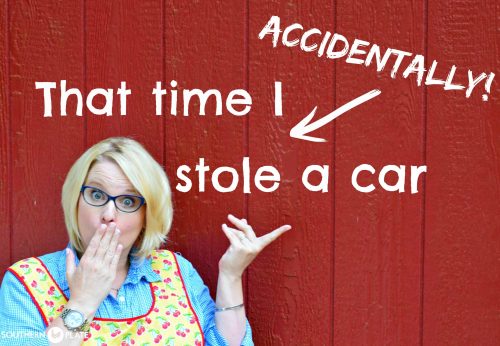 You may be thinking, “How could Christy possibly do that?”.

Well, settle in because I’m gonna tell ya.

From time to time companies will want me to travel for them and they will pay for my travel expenses as a result. More often than not, this involves flying but seeing as how I have developed a habit of appearing to be horrendously suspect to every TSA officer I encounter over these past few years (I get full frisking now, every time) I have come to prefer driving whenever faced with the choice. Sidenote: My first book tour in 2010 involved a flight nearly each day for a month. Fast forward to Fall of 2016 and there is nothing but mileage and me behind the wheel on the schedule.

I had a trip I needed to take, a very fun trip actually, but I am going to refrain from mentioning the destination or personality involved because I relayed this story to their PR people shortly after it happened and there was a rapid clutching of the pearls and fanning of hands at the horror of the very thought of them being associated with grand theft auto. Goodness. Some people sure get worked up about things….

Katy was nine at the time and when I mentioned that her daddy was going to drop me off at the airport to pick up a rental car, she was instantly fascinated. A barage of questions ensued.

At the time we were already homeschooling so, as a homeschooling mom, you naturally tend to work in any form of life skills education you can. As a result I offered to take her with me and show her the process.

Ricky dropped us off at the airport and we headed to the rental counter. I pulled out my driver’s license and credit card while filling out the paperwork, explaining to Katy along the way what I was doing and why. The lady behind the counter was very nice and in a few minutes, we were headed out to the parking garage to see what car we had.

Here is where I blame our current decade – there were no actual keys, just a key fob.

It was one of those weird things that you just have in the car with you and then press a start button for your car to go. Now, this was my second encounter with one of these weird magical key whosiewhatsits. The first encounter had been a year previous when I had been given one for a rental car in Los Angeles. On that occasion, I had sat down in the car, saw what the dealio was (and that a key did not, in fact, pop out of that crazy fob thing), found an attendant, and kindly explained to him that I was going to need a car with an actual key that went into an actual ignition. He hooked me up with a cute little red number and everyone went away happy.

Here I was, a year later, and I accepted my fate: that I would have to add another “technological innovation” into my life.

Sidebar: Many of y’all cansymphathize with me here. Those of us who were around and happily living life before the internet, before cell phones, before pagers, even, have had a lot of tech push it’s way into our lives. ~slips into her rocking chair~ Kids, when I was your age if the phone rang we had no way of knowing who it was and if it was for us, we had to go sit in the kitchen and talk – there was no privacy. If we wanted to learn something we had to get a ride to the library, use this thing called a “card catalog”, go find a book, and then hope there was a good index or else spend the afternoon flipping page after page. If we were out at the grocery store and forgot our list, we had to recall it from memory as best we could, and if Mama was gone and we needed her, we had to wait until she got back home – and we never really knew when that would be. The only mail there was for letters required a stamp – which was pretty affordable at the time, and anything we needed typed up had to be done on a manual typewriter, where we covered our mistakes with liquid paper and blew on it before trying to get it perfectly lined up again so we could type over it. If we wanted to “print something out” all we needed was a pencil and some paper (which still works, by the way).

I have had to make an awful lot of room in my life for technology that wasn’t even a twinkle in Steve Jobs’ eye when I was born. Pardon me if I am loath to add more.

There we were, walking out to the parking garage. Katy was excited and bobbing all around as if we were purchasing a surprise new car, chatting away about what color it might be and what kind it was. As we get close, I press the button to lock the doors and we hear a “beep! beep!” as the headlights flash on of a car ahead of us. “There it is!” I declared, and we headed to it. Pressing the button to unlock the doors, we both got in and I adjusted my seat from the professional basketball player who had rented the car previously, setting my fob down in the seat beside me. I put my foot on the brake and pushed the start button. Sure enough that thing came to life.

Now, in larger airports, I would have had to go through a checkpoint to get the car out of the garage wherein someone would look at my receipt and paperwork, but this is Huntsville Alabama and one of the perks of paying double the price for airfare is that we are saved such inconveniences as double checking paper work or having to choose between more than one food counter at our airport :).

So we headed home. I loaded up the car, left my children in the capable hands of their father, and hit the road. All was well in my little world until about two hours later, when I pulled over for a drink. Note: “drink” in Southern talk implies alcohol. I’m a teetotaler so just know that when I say it, I mean water, diet dr pepper, coffee, unsweet tea, or some other concoction. Although this story might make more sense were I imbibing, I was totally sober when I stole this car.

I got out of the car and walked in, pressing the lock door button without glancing back. As I came out of the gas station, I pressed the button to open the trunk so I could retrieve something from my luggage – and nothing happened.

I looked down again and pressed the button, nothing. So I unlocked the car, no blinking lights, nothing. Trying my door, I saw that it was open and figured that the batteries must be dead in my fob. It was then that I noticed an additional fob in the door. I picked it up and it immediately worked. This was weird, though, because this fob looked different from the one I had been using. I checked the tags and my stomach dropped – a different car was listed on each fob.

Oh goodness, I was two hours away from the airport in a stolen car.

How did this happen? Well, we had misjudged which car had beeped at us when we went to claim it, but didn’t think anything of it because these cars are designed to start as long as the fob is in the car. The car starting was further assurance to me that we had the right car – but the problem was that this car had been left with the real fob still inside it – so it would have started no matter what I had with me. The car had been in my possession for a little over four hours at this point and no one had noticed.

I immediately called the rental car place and when the person at the counter answered I blurted out “Hi, my name is Christy Jordan and I think I accidentally stole one of your cars.”

Bless her, she noticeably stuttered and I’m sure in that moment her brain was trying to process what to do next in terms of FBI, Local Police, or immediately handing me off to her supervisor – she chose the latter.

I pieced together what had happened over the phone and in my own mind at the same time and finished with telling her who I was heading to spend time with and why. She was impressed enough to tell me that she would make a note on the account that I was in a different car and all would be well, provided I turned in both fobs when I returned.

My fear of seeing the lights of multiple state trooper cars in my rear view mirror instantly dissipated.

I went about my trip, arrived safely, smiled in the pictures as if I had not committed grand theft auto that very day, and came home a couple of days later.

As I dropped the fobs off, I left a wrapped gift for the manager.

She would later open it to find one of my hardback cookbooks with the inscription:

Thank you for all of your help that time I accidentally stole a car.

Subscribe to my free recipe newsletter by clicking here (and filling out form).

Ask to join our exclusive Facebook group of kind and neighborly people by clicking here.

Technology sure has come a very long way, but times like these make me wonder if sometimes this is not at all good. LOL. I too grew up prior to the new technological age. My boys still look at me sometimes in amazement that we didn’t have all the “stuff” they have. Now that I have a grandchild, I can’t wait until he is old enough for me to tell him of the “horrific” way that Yaya had to grow up without a cell phone and internet and how if we want air conditioning in the car, we had to physically turn a handle to lower the window.

Have a very Merry and Blessed Christmas and keep your wildly funny stories coming.

You are truly my kind of lady….that sounds just like something I would do.
Have a great day!

I was away in Italy and didn’t get to see this post until now…worth waiting for…Honey, this could have happened to any of us…and you handled it with such southern charm and spunk! Loved it!