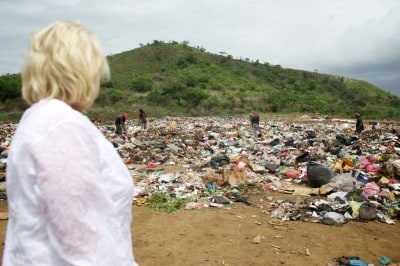 I feel like I have lived out a year of my life in one day.

This is going to be a day that stays with me, one that I can close my eyes thirty years from now and still remember the sights, smells, sounds, still feel the hugs, still see the hope and joy rising up among piles of garbage – literally. 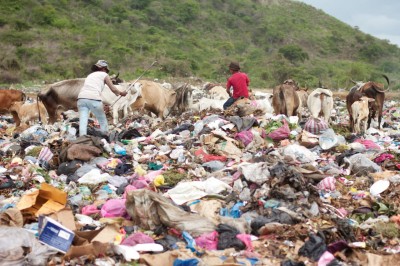 We started our day by visiting a city dump. This was literally a dump. Now I don’t know about y’all but I’ve driven by dumps before and not once have I ever seen any people there, much less entire families, people grazing cattle, or wagons to bring loot back hitched up to scrawny horses.

Never once have I ever thought to stop or wander around there. 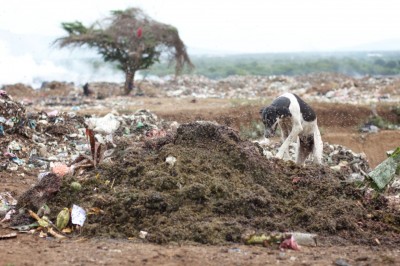 As you look at these photos, if you are wondering about the smell, I’ll just say “yes” and leave it at that. 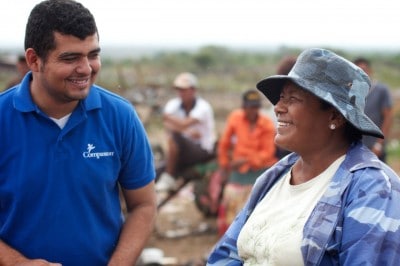 “I am not ashamed to work here. This is what we do to survive.”

But the thing that stuck out at me was this lady named Lucita who spoke with us. She arrives at the dump each day by 5:00 and stays until the trash trucks stop coming. Picking through trash, she hopes to find enough plastic to sell to earn an income of less than $1 a day if she is lucky.

She said “I have worked here for 22 years. I am not ashamed to work here. This is what we do to survive. It is good work and I work hard.” 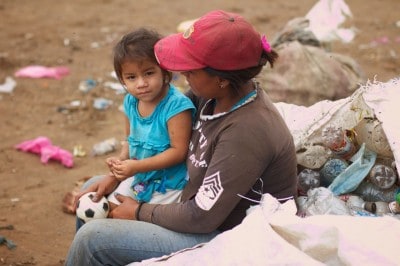 When she had children, and even now with her grandchildren, she brought them with her and they played while she went through trash. While we were talking a little boy found a taxidermied lizard in the trash and ran over to a group of children behind Lucita to show them. They quickly lit up over such a treasure and he passed it over to three little girls who couldn’t have been more than two or three years old who began playing with it much like my daughter would a baby doll.

A little angel, who appeared to be around two, found a pen top in a bundle of trash and began chewing on it, smiling as she pulled it out of her mouth to see how her teeth had pinched their outline into the plastic. Later she got tired and laid down on top of bags of trash for a little rest.

From there we went to our first Compassion Center, which the child I sponsor attends. My friend Kelly and I were supposed to meet our sponsored children later on in the afternoon but they surprised us and had us meet them sooner.

Kelly’s little boy was waiting by the gate the moment she stepped off the bus and as soon as I realized what was happening I started looking around for the teenage boy I sponsor. I didn’t see him but heard them mention his name a few times and one of the teachers ran towards the village. “They’re going to get Wilbert.” the translator told me.

My heart went immediately into my throat.

So let me tell you the process of choosing Wilbert. I’ve been on mission trips before and worked with kids on each one. Every single child is precious and getting to spend time with them is always an amazing experience. But as a mother of a boy, the thing that stuck out at me on these trips were the older brothers. They seem to always be standing on the sidelines, looking after their siblings, appearing far too grown for their age. Never complaining and always happy that good things are happening to the younger children in our family.

Stoic nurturers with the hearts of men in the body of a child.

I knew right off that I wanted to sponsor an older boy. When I went to the site and did a search, I looked right into Wilbert’s eyes and heard a whisper in my heart that he was the one. 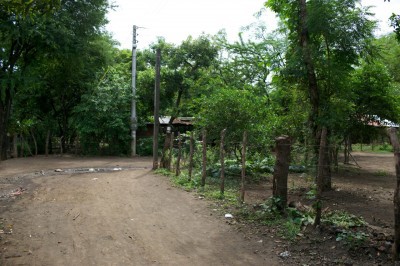 As I looked down the road, I was thinking to our two kids and how I was raised in a family of five. Due to several factors beyond our control, we are resolutely a family of four. As I watched the end of the dirt road for Wilbert to approach though, I felt like an empty spot in my heart was about to be filled. 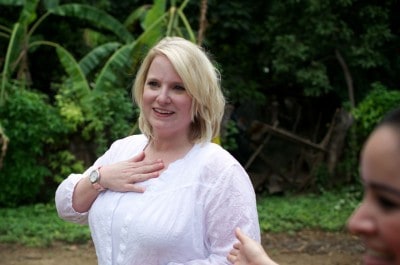 I worried that I wouldn’t recognize him. I’d only seen one photograph of him on the internet after all. So I started listening to the conversation, figuring as he approached someone would say his name, all the while anxiously watching the corner at the end of the street.

When a young man turned it, I glanced at his face and instantly recognized the boy who smiled at me when I heard those words spoken to my heart. He smiled and walked up to me, reaching out his hand for a shake. I shook it and then asked if I could have a hug. Bless his heart he obliged while I sprung a leak in my eyes. He was a fine young man, the same height as my son with similar builds, with that same calming watchful presence I had seen in boys his age before. 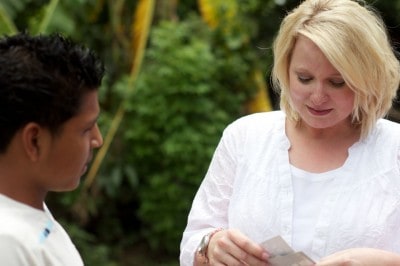 I handed him a photograph of my family and explained who everyone was while he nodded and listened intently as if there was going to be a test after. As we moved inside the gates of the school I asked about his brothers and sisters and he proudly told me he is the oldest, with a younger brother who is 9 and a sister who is 2. I kept referring back to my own son and how important he is to me and Wilbert told me about his mother and how hard she works to take care of them. We had a wonderful time chatting and I could tell he was well loved and cared for at the Compassion Center. 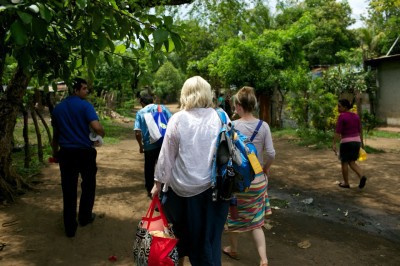 Later, we walked to Wilbert’s house. 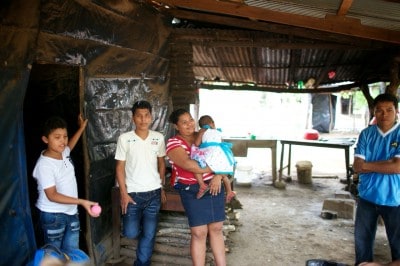 The thing that gets me the most there, what I hope you can see from the photographs, is the contrast. Wilbert’s home is more of a shed, really. There are some poles put into the ground on four corners with tin as a roof and as two sides of the house. The rest of the exterior walls of his home are black plastic. 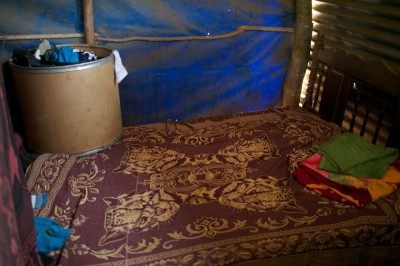 Inside, there is a blanket hanging to create Wilbert and his brother’s room (Who is named Eddy by the way) and another to create his mother (Maria) and baby sister’s room.

They are very proud of their home and it is really quite nice and cozy compared to many in the same village.

I came bearing gifts, so getting to hand those out was a treat for me and for Wilbert.

The big fascinators of the day ended up being:

1. A kaleidoscope – No one had ever seen one before, so I had to show them how to do it. Even our translator said “Let me see that a minute..” and stepped out into the sunshine to look up into the pretty colorful patterns.

2. By far the biggest thrill for them was the washcloths that I got from Dollar Tree that expand when you put them into water. I explained how they worked and they all looked really confused. The translator asked “Do they explode? Do they blow up?” and after further explanation, they just couldn’t imagine a small puck like object turning into a washcloth so they asked if I would demonstrate.

3. One of those solar powered flowers that move back and forth. Maria, Wilbert’s mother, lit up in complete delight over this.

4. An Etch A Sketch. After I demonstrated it, they looked on anxiously waiting to get their hands on it so they could try for themselves.

I felt a kinship to Maria from the moment I saw her smile of pride and love when she looked at her two boys while cradling her daughter. This is a mother who loves her children, with a mother’s heart.

We spent the better part of an hour talking with Wilbert’s family about how we plan to stay in touch, want to learn more about each other, and how the Compassion Center has impacted Wilbert’s life. Both he and his brother go, and his brother has a sponsor. His sister will go when she is old enough. Both boys beamed when they spoke of the center and Maria looked on and listened with pride in her eyes.

Finally, I told her, “You’re boy is getting big, just like mine. I keep telling him to stop growing up but he won’t listen.”

She smiled over at Wilbert “Si” she said, and then turned back to me and spoke in Spanish.

The translator repeated her words so I could understand “We are so thankful for you sponsoring him.” 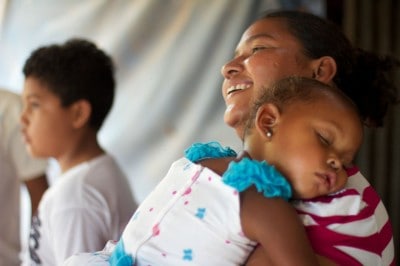 And rather than bemoan the fact that her house was made of plastic, her floors were made of dirt, her neighbors worked in a dump all day collecting trash in hopes of selling it for less than a dollar in return for a day’s backbreaking work, she looked at her boys with a smile of love and a twinkle of hope in her eyes.

If only all families could have such wealth.

Change a child’s life by clicking the banner below and sponsoring a child as I have.
I’ll be back here to share my heart with you again tomorrow evening after another day out in the field.

Hello to all, how is the whole thing, I think every
one is getting more from this web page, and your views are good for new
users.

You have reality some sort of perfect website owner. Your website running pace can be awesome. This kind of believes that you’ll be carrying out just about any exceptional technique. On top of that, This articles are generally must-see. you’ve done a excellent pastime during this issue!