My husband doesn’t read my blog. I need to start out by saying that because me posting about something he won’t find out about until later makes a lot more sense with that knowledge. For that matter, I don’t really know anyone related to me who reads my blog, even my own mother, unless I ask her to proof something, and if you’ve been with me a while you’ve been treated to enough type-o’s to know that doesn’t happen often.

So Katy and I decided a week or so ago that we’d really like a nice, comfy, cozy place to curl up together and snuggle when we homeschool. A lot of subjects allow for that, especially history, bible, and reading, and we set out to find something.

Up until now we have gone and curled up in bed from time to time, but honestly, that is a little too cozy and warm and it reminds me of the sleep I’m missing in my life.

Now, we do have furniture in our living room but it’s just not something that works for two people. We have two recliners that we used to be able to get in together but now that Katy is 11 and the size of a tiny woman it’s just not as comfy as it used to be. Our couch is more of a “sit up straight” type piece of furniture – it gets the most use when we have company – but the family generally avoids it.

So this past weekend I happened upon a comfy looking sofa with a chaise lounge big enough for two people on the end. It was second hand and a good price (I thought). I got excited and made an offer. My offer was accepted. I proudly told Ricky and he responded by announcing that we didn’t need to spend the money and it wouldn’t really fit in our den.

Dang, got me with math on both accounts.

Forget the fact that he was right, that has nothing to do with this. I mean, our den is teeny tiny. It’s the kind of den that makes ya say “Umm, lets go into the kitchen…” and there isn’t a lot we can do about that.

Sometimes I miss the old days when we were first married living in a manufactured home. If any of you have ever lived in one of those you know they can spoil you right quick with open floorspace. Most of those things are brilliantly laid out in a way that opposes the concept of most homes. It seems manufactured homes approach design from an angle of “We are small so we need to make it feel as large as possible” whereas most homes have the idea of “We are small so we need to have as many rooms possible”, which is why our living room is smaller than most people’s bedrooms. So yes, an additional couch, much less a sectional one, won’t fit.

Once the couch idea was shot down I was reminded of a very important bit of wisdom when it comes to my husband:

Sometimes it is best if I don’t let Ricky know a plan until it has been executed.

Which is why I didn’t tell him that we had a 7×5 foot giant beanbag being delivered today.

Oh it didn’t ship that way, though… 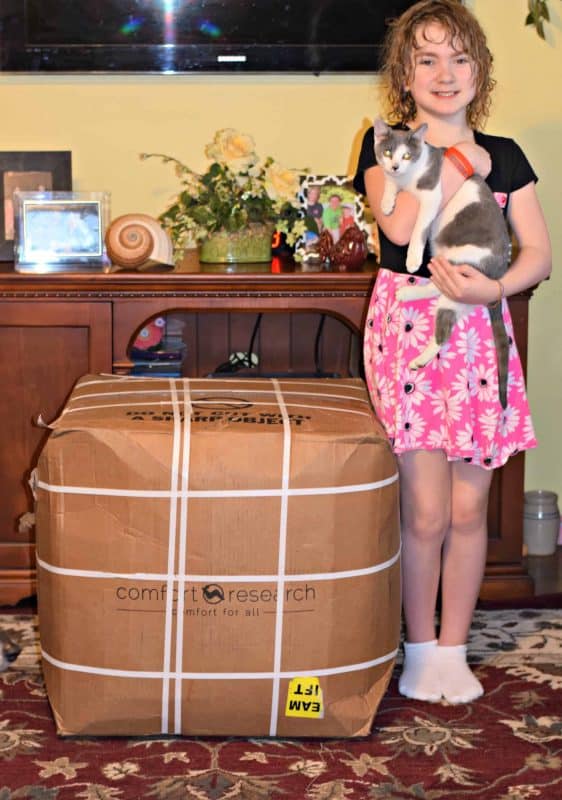 It came like this. See? Totally manageable size. I just had to drag it into the house (it weighs 60 pounds with a wind chill factor of 200) and move a little furniture around in order to get it through the door and to the spot where it is sitting in this photo.

By the way, say “hi” to Nosey, Katy’s cat. Katy just got out of the shower so her hair is still wet. I figure you’ve seen wet hair before so this shouldn’t be that shocking. If you’ve never seen a cat before, I’m sorry for springing that on you. 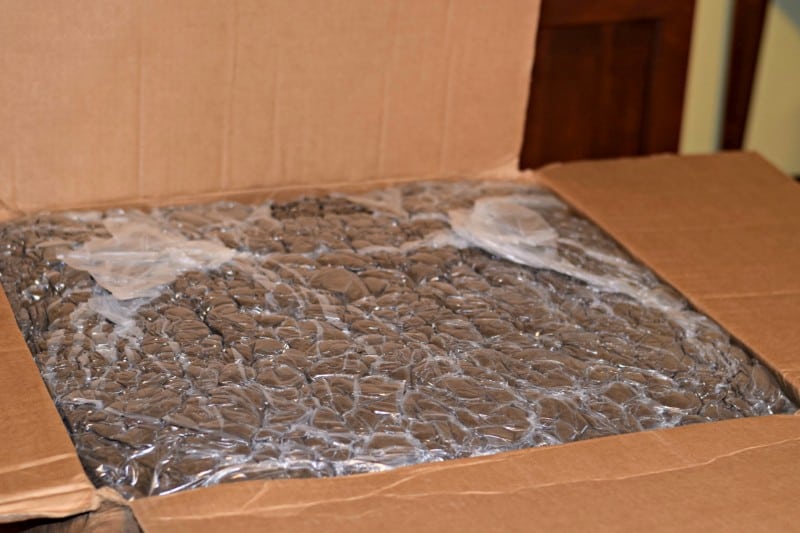 “The Bean“, as we have started affectionately calling this, comes vacuum sealed in a box. You see, the inner filling is made entirely of chunks of memory foam so that it won’t ever go flat and just needs a little fluffing from time to time. In order to ship this mammoth, though, they remove all of the air and compress it. Otherwise you’d have a large fedex truck that could only transport four or five of these puppies at a time – and that wouldn’t be very cost effective. I imagine that is how the government would transport them… 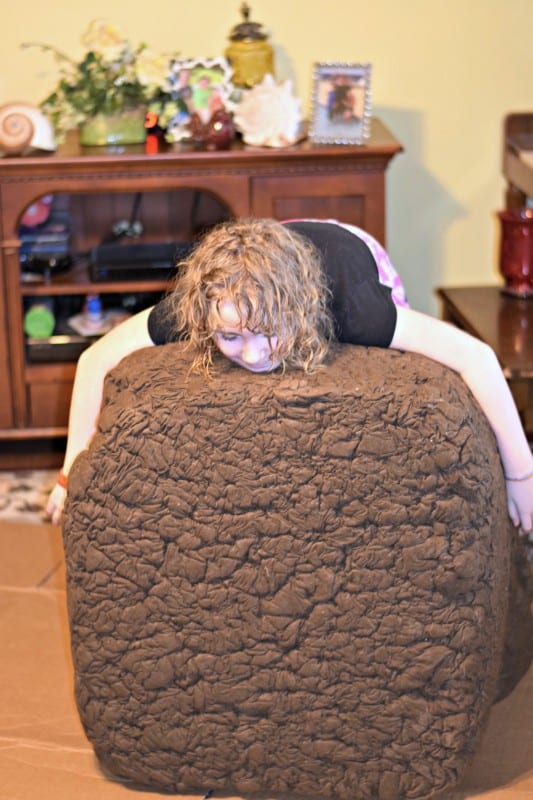 I wasn’t able to pull it from the box so we ripped the box away from it instead, and removed the plastic bag. This is what was left. Still looking somewhat manageable in size but here is where the work starts.

They say that it will continue growing for 7-10 days until the memory foam is all fully expanded. It sure is comfy and we have had a ball so far. 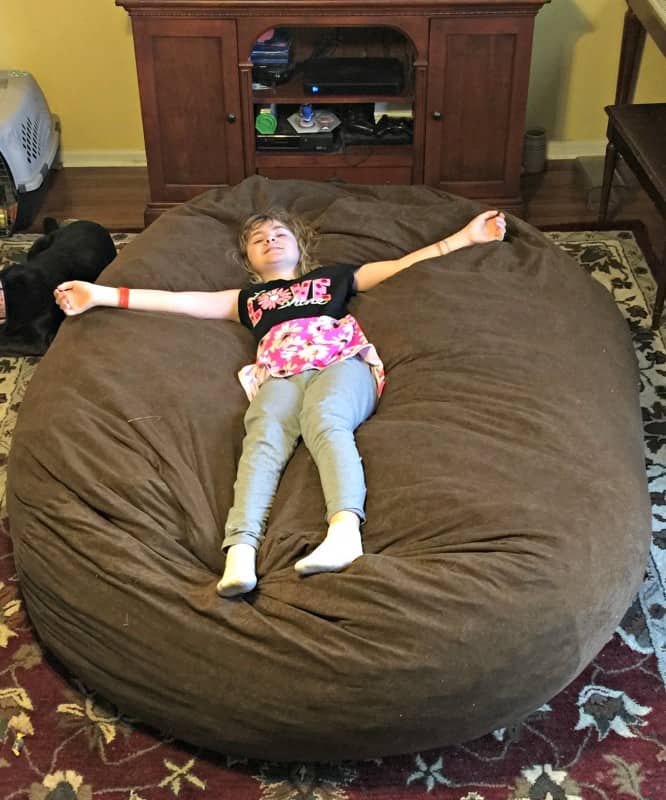 The brown color practically makes it invisible, don’t you think?

But the big question is, when Ricky gets home tonight, do you think he will notice? 🙂

Update: some people asked for a link to the one we have. Click here to see it on Amazon, where I got it. (This isn’t a sponsored post, I bought this and just decided to share the adventure!).

oh thank goodness…I thought you were going to be in trouble!!! so glad the whole family and dogs can enjoy it! Girl you are so funny and I don’t always take the time to write,but you brighten my days so many times!! That song “brighten the corner where you are” comes to my mind!! Continue on being YOU!! love ya,Rita

Can’t wait to hear/see how Ricky responds! My husband would definitely notice it right away. My two four-legged children would love it but one of them would probably think it is a huge chew toy and chew it to pieces! Love your positive outlook!

LOL, he did notice right away, but as soon as Katy pulled him down to try it out he was as hooked as the rest of us are!