This comforting corn chowder is a long time family favorite and perfect for company and cold days. 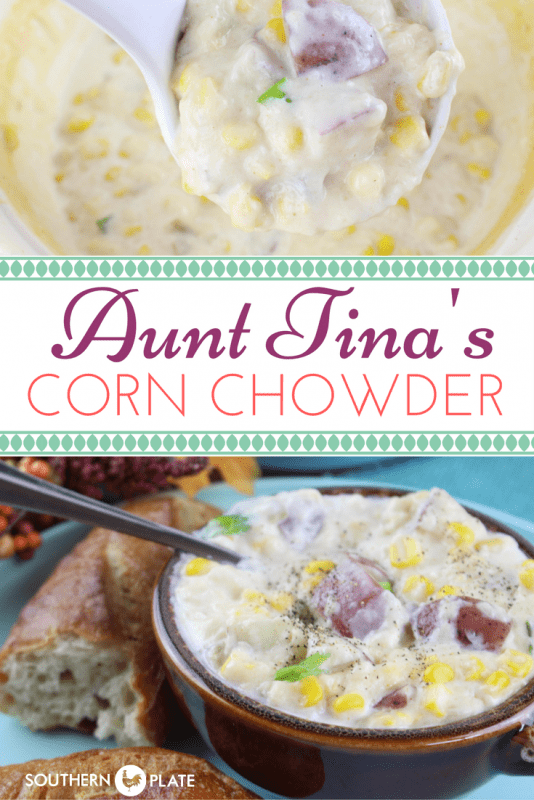 This post is for my reader, Joe, who really needs to see a tree today :).

I’ve been in such a soup and stew mood lately and its all due to our recent delivery of cold weather. You see, it just now got a little bit cold in the south. Now I say a little bit but anyone else around here would tell you its downright frigid. Normally I would be in agreement with them but after having visited Canada several years back in January, I am now privy to cold on a whole new level, one that is almost unfathomable to a lifelong southerner.

If you have time to visit a spell, keep on reading for conversation and step by step photos of making this.

If you are in a bit of a rush and need to jump to Tina’s Corn Chowder recipe, please click here.

You see, here in the south, we’re complete pansies when it comes to winter. We wait and hope, keeping our winter clothes on standby, often suffering through short sleeves and perspiration as late as Halloween…and then one day it hits. A frost! GRAB THE TURTLENECK!! IT’S SIXTY DEGREES!!! We get all excited about pulling out that part of our wardrobe which we get to wear maybe two or three months out of the year – four if we’re really lucky.

Meanwhile folks of the northern persuasion come down to visit during the month of December and look at us all bundled up like Eskimos on a 50 degree evening and go home with more tales of “those crazy people down south.”

Then by the time January rolls around, the novelty has worn off. The skies are overcast and we’ve got a doozy of a case of cabin fever. We were not engineered to handle this. How do others do it? How on earth do you manage a cold season that lasts more than three months? My birthday is in February and that’s about as much as I can take. I can wait til then and maintain my sanity. Come February (most years), daffodils are in bloom and spring is going for her first spin around the block.

Bet you ninety to nothing that we’re complaining about winter not lasting long enough by the time July rolls around though.

Tina’s Corn Chowder is my only chowder recipe. Chowder has never seemed a southern dish to me, but I sure to enjoy this one. It’s the name that makes it seem non-southern I guess. I picture folks coming in from lobster fishing (or catching…or whatever it is you do to get lobsters) wearing thick sweaters and speaking like the Kennedy’s.

Other than this one, I’ve only had one other type of chowder – clam. My mother is going to die when she reads that I actually ate an entire bowl clam chowder. She does NOT do seafood in any way, shape, or form. Truth be told, I don’t either. However, I was invited to a friend’s house on Christmas Eve (which is, of course, an honor) and they were all excited about their traditional Christmas Eve meal. Now, if there is one thing a properly raised Southerner understands its pride in the dishes you grew up on! The last thing a polite person would do is anything at all that might seem to insult it.

My friend who had invited me did not help matters though. I whispered to her “what does it taste like?” and she replied “Oh its good, but the clams are just like eating old pieces of chewing gum”. ~gulp~

We all sat at the table, the mother said grace and then served us this very pretty looking chowder she had been working on the better part of the day. I am not sure if I actually tasted the chowder because I can’t remember the flavor, I think I blocked it out. But, I do remember eating an entire bowl and gushing every other bite about how delicious it was and how thrilled I was to finally get to taste a real chowder! Now nobody go gettin’ all offended by me not liking clam chowder, or clams…or oysters..or lobsters..or anything else. There are better things to get offended about and I’m not wasting any time catering to anyone who doesn’t have the sense to realize that. ~smiles angelically~

Other than pond raised catfish (which I have now given up as well), I’ve managed to avoid everything that lives in the water since then!

Tina’s Corn Chowder is a great meal for vegetarians. Simply substitute the chicken broth with vegetable broth and you’re off to the races! It is hearty, filling, oh so warm, and has just the right blend of flavors. I adore it. Special thanks to my sister in law, Tina Jordan, for passing this recipe on to me many years back.

The original recipe also calls for a bit of Dijon mustard. I do recommend using this but I didn’t have any and y’all know how I hate to go all the way to the store just for one little ingredient when I can very well do without it. 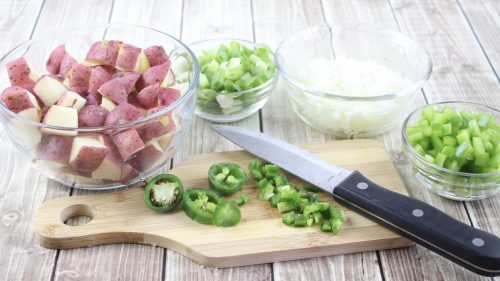 You can also use a jalapeno from a jar if you like, or leave it out entirely – but the little bit heat it lends adds great body and flavor to this.

Melt your margarine in a stock pot over medium heat so you can saute all of this goodness in it. Saute white onion and bell pepper until tender.

For those of y’all just now joining the Southern Plate Family, I wanna say two things. First of all, WELCOME! We’re so glad you’re here. Secondly, Yes, you can use either real butter or margarine if you like.  I fully understand that budget is a necessary component in ingredient choice. No judgement here.

Saute onions and peppers until they are tender. This will just take a few minutes on medium high heat. 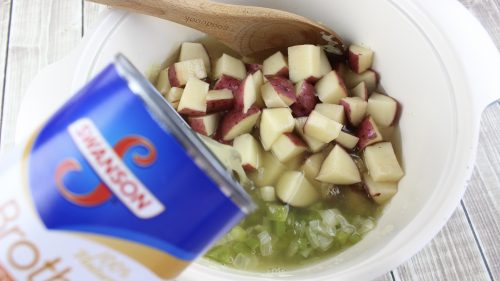 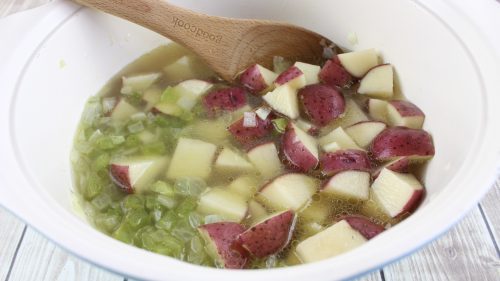 Bring to a boil. Reduce heat and cover, cooking for about fifteen minutes. 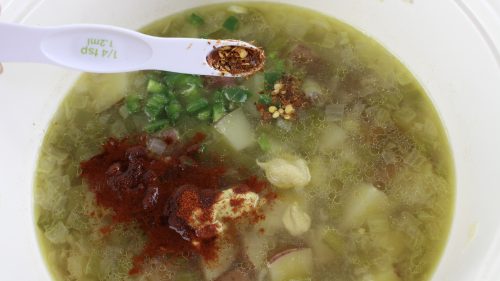 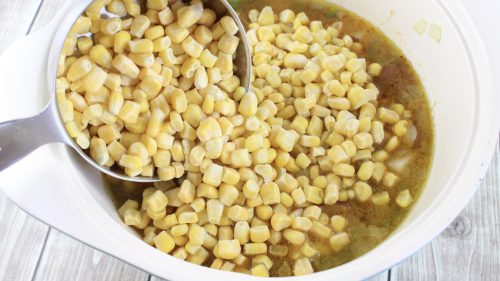 You can use canned corn if you like, I just prefer frozen.

Here is a little grocery tip: If you are ever out and about and need to pick up something cold but don’t have a cold bag with you for your car, just pick up a bag or two of frozen corn. This acts as a wonderful ice pack, usually costs about a dollar per bag, and is always handy to have in your freezer. 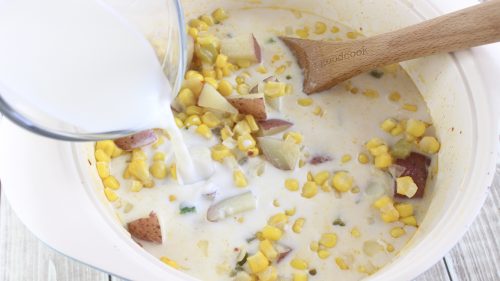 Add 1.5 cups of milk. Bring this just to a boil and cook for about fifteen minutes, stirring from time to time. 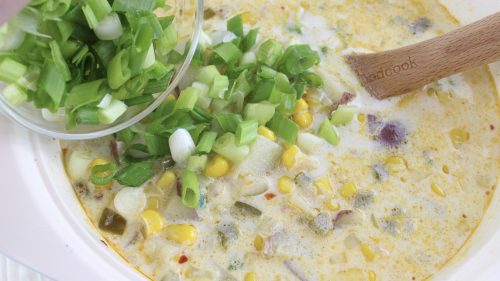 Add in the chopped green onions.

Green onions and the sweet juicy corn are my favorite parts of this chowder. Just in case that question was burning in your mind. “Christy, what are your favorite ingredients in this chowder?” 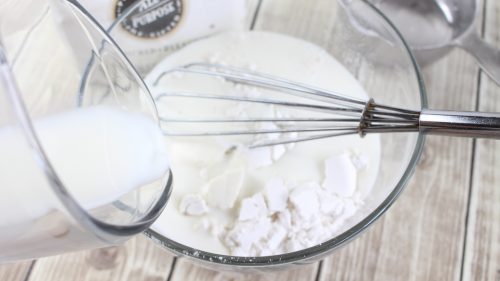 Meanwhile, back at the ranch…

Add flour and remaining milk together and give this a good stir to blend until it’s smooth. 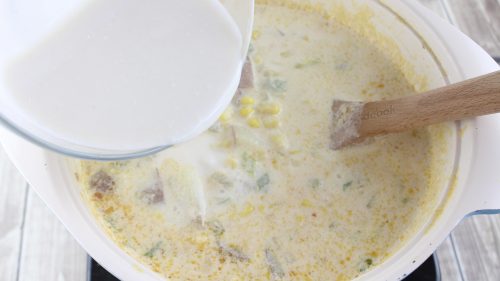 After the fifteen minutes of gently boiling your chowder, pour milk/flour mixture in and stir again. Cook this for about two minutes, or until thick and bubbly. 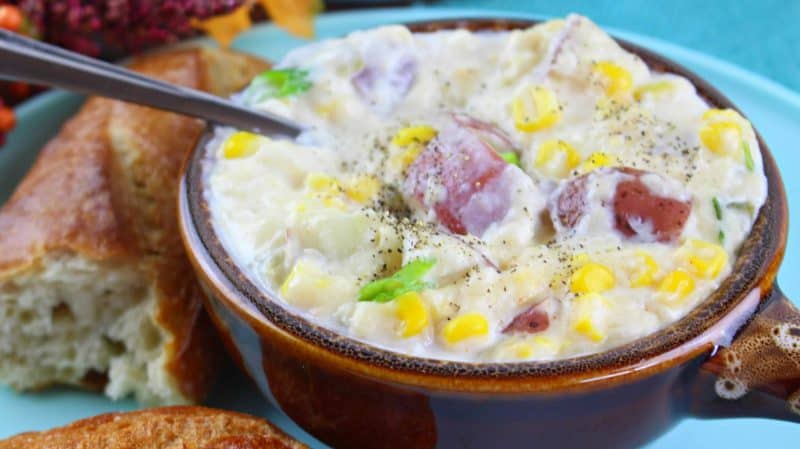 My sister in law likes to add bacon and cheese when she makes this. 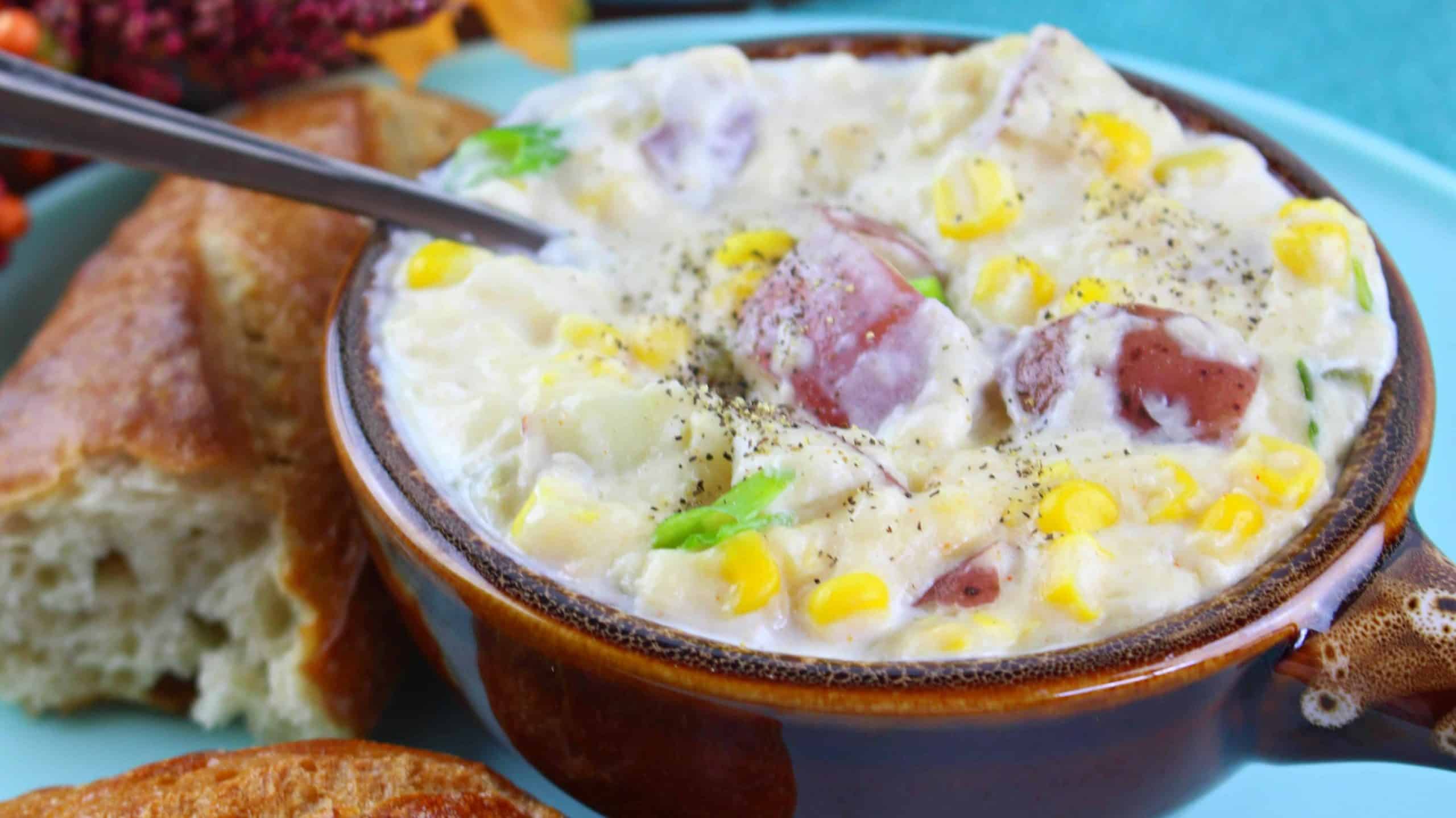 I originally published this recipe in 2008 and have recently updated it with new photos and better written instructions. I hope you enjoy this long time family favorite!
Tried this recipe?Mention @southernplate or tag #southernplate!

WHEW isn’t that ingredient list long? Y’all know I wouldn’t have a recipe with THAT many ingredients if it wasn’t good!! Still, no weird stuff that you wouldn’t be able to use again in another recipe!!

Today is a GREAT day waiting to happen! Get out there and enjoy it!!

It’s better to aim for the Stars and miss,

than to aim for the ditch and hit it.

Submitted by Donna. Submit your quote or read more by clicking here.