Home » Wow, that was an intensive interview! 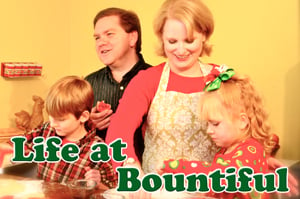 A lot of folks have asked me how my life is changed and what it is like for me right now. Today I finished an interview for a magazine and the writer asked some pretty intensive questions. In answering them, I realized that there are a lot of things I haven’t talked with you about so I thought I’d share part of the interview with you (because you’re family!).
Here is a peek into my world right now, the part that is outside of the kitchen. I’m warning you though, the inside of my mind is a pretty cluttered place!
Gratefully,
Christy

1. Since your book tour, what challenges come with your success?

My biggest challenge has been other people wanting my time. I consider myself to be a stay at home mom, and with young kids that is obviously my most important job. I have daily requests for me to travel hither and yon for speaking engagements, TV appearances, book signings, etc. I am really honored each time someone thinks of me in that way.  The thing is, though, each of those that I agree to means days that I won’t be with my kids or in my home looking after them. I turn down a lot more than I agree to these days but saying “no” to a travel appearance means I’m able to keep my focus on what is really important.

The greatest perk is the Southern Plate family. I know a lot of really nice people now. 🙂

As far as other perks,  I almost didn’t make my Today Show appearance. That was right during the blizzard in New York and my flights were all canceled the day I was supposed to go out. I talked to the local manager at Delta and explained what I was trying to do and why I needed to be there and then left it in his hands. He called by days end and had managed to get me into the blizzard struck New York AND out the same day of my appearance. When I arrived at the airport, I found he had booked me first class to boot. I’d never ridden first class in my life and I have to admit it was pretty neat. However, being a common sense gal, I can’t see myself actually paying for the extra legroom and little bottle of water. I imagine I’ll be coach for years to come! I left him a signed book and note of thanks and now I think I have the entire staff at Delta in Huntsville rooting me on! They have been so nice and sent the kindest email to me after my Today show appearance.

3. What was it like to be featured in Southern Living?

I tell you what meant the most to me, being able to open it and see my two kids on the table of contents page. You just can’t imagine what an experience that was. Then to turn and see the rest of my family, my Mama and Daddy, husband, dear friend and her family, along with my kids and even my dog Zoe! It was just a wonderful gift and it still seems as if it’s not real. Seven pages? Wow.

My daughter was five when that came out. I got the first one and opened it and flipped through as I showed her the photographs of herself and her family, explaining how neat it was that we were all in there. She kind of nodded and halfway paid attention then went back to playing. The next day she came home from Kindergarten and said “Mama, a teacher at my school showed me that magazine with us all in it! Did you know there were TWO of those ?”

I tried to explain that there were millions of copies of that magazine in print but she’d already lost interest and gone back to doing her own thing. I realized that I don’t need to try to make it a big deal to the kids because to them, it isn’t nearly as important as whether or not I’m going to be able to help with their school parties or be waiting on them when they get off the bus. When the feature came out in Guideposts, I asked if they wanted to see it and gave one to my son to read (he is eleven). My son read it and said it was neat before getting back to work on his homework and Katy just nodded and went back to tracing her hands to make turkeys. I think they have their priorities in order.

4. How did a little ‘ol country girl manage to find herself in New York and on the set of the Today Show?

I’ve never sought any of this out, so it is really amazing how it has all come to me. No one ever asked if I was comfortable speaking in front of a group of people or doing live TV, people just call and invite me and I have kept myself open to all of the opportunities that have come my way as long as they don’t have any adverse affects on my family.

So how did the Today show happen? I got an email from the head of marketing at my publisher who basically said “Guess what? We’ve booked you on the Today Show December 29th!” So I blinked a few times, took a deep breath and emailed him back and said “Wow cool! Thank you!”

Then I flew into a blizzard and made fried pies with Al Roker. Totally normal day, right?

5. I know your husband has been of great help to you and your site, but since your success has grown, has a staff accompanied you? Have you needed a personal assistant, etc.?

Oh goodness, do I ever need staff! I pass off occasional web redesign projects to my husband and I have a dear friend who has really stepped in to help me keep up with my schedule and answering emails. I try to handle the comments and Southern Plate Family emails and Jyl handles the business emails. I work eight to ten hours a day on Southern Plate and Jyl does about the same some days. I tell folks, it doesn’t pay to be in my inner circle of friends right now because chances are you’ll be put to work!

When you start having television producers and things coming to you, it’s smart to make sure you know what you’re doing. Being a stay at home mom, I’m clueless as to all of that stuff. The entertainment business is as foreign to me as…well as a foreign country. So you have to look at finding someone who knows the business who can look out for you and advise you and such. Fortunately, I have a great agent who fields a lot of things for me and helps me manage my time when things get a little crazy. I’m currently with ICM Talent Agency and have the same agent as Candace Bushnell, how crazy is that? Over the years they have represented Charlie Chaplin, the Marx Brothers, Clark Gable, Judy Garland, Will Rogers, Marilyn Monroe, Dick Van Dyke, Frank Sinatra, Elvis Presley, and even John Travolta. Now they represent me. Poor folks, I think they drew the short straw there and don’t even know it :).

And you know, out of all the people ICM represents, I’m probably the only one lucky enough to find ground beef on sale at Kroger’s today! YAY ME!

6. Have you changed, or do you consider yourself the same, easy going girl?

I’m still me and always will be. I’m nobody special and I know this for a fact. However, my time for myself is pretty much non existent right now, so that means nights out with girlfriends or quilting retreats with my mother are out the door at this point in my life. I’ve grown more protective of family time which is a good thing. I’ve had to learn to prioritize and I’ve had to learn how to say the word “no”, which is a special challenge for southern women, I think.

I often find myself looking around at my life and thinking “why me?” but in a good way. I’m so very grateful.

7. How successful has your cookbook been?

In the first month or so it sold over 50,000 copies and is still going strong (I have no idea what numbers we’re at now). I think we’ll go into the second printing soon and I’ve got some more national appearances lined up which will also create more surges in sales.

8. Do you have plans for another book? Or other shows?

I’ll be on QVC at some point, that is in the works now. I’m working with a TV production company out of LA and they’ve already filmed a pilot episode for a potential television show. They flew to Alabama to film it, too, and I really appreciated that. We’ll see what comes of it over the next few months but they are really excited and I can’t help but be a little bit excited, too.

I’ve already started working on my next book but have no immediate plans on when I’ll finish it up or release it. I’m enjoying this book right now so maybe in the next year or two I’ll put another one out there in the world if there are folks who will give it a good home. 🙂

9. Do you have plans to move if your empire grows anymore?

Nope, nope, nope. I was raised in Alabama and my family has lived here the past nine generations. We were in Alabama before it was even a state. My husband works for a wonderful company in Huntsville. Television cameras and contracts are not a motivation to move. Neither is money when we have all of these wonderful things no amount of money can buy. This area is my home and you know how folks say you should bloom where you’re planted? Well I’m pretty deeply rooted right where I am and this has all bloomed on Alabama soil. I want to watch my kids bloom here, too.

I never dreamed of doing all of this but I did dream of getting to be a mother. I’m enjoying living both dreams but the first one is my priority.

There are no do-overs in parenting.

I have recently found your website/blog, and to say that I’ve enjoyed it, is an understatement. I enjoy your sense of humor and the positive outlook on life. I LOVE your life priorities, your shameless faith in God, and the fact that you are a deep rooted Alabama girl! I have tried several of your recipes, and especially use the coffee concentrate for milk (regular hot coffee never tastes as good as it smells–with this I get the best of both worlds).
I was tickled to see that you are passionate about the Operation Christmas Child boxes. I am the OCC coordinator at my church and it holds a very special place in my heart!
Thank you for sharing your recipes and your life with us.
Benita from Clanton, Alabama

Christy, you are an amazing lady and I knew you could do it. 🙂