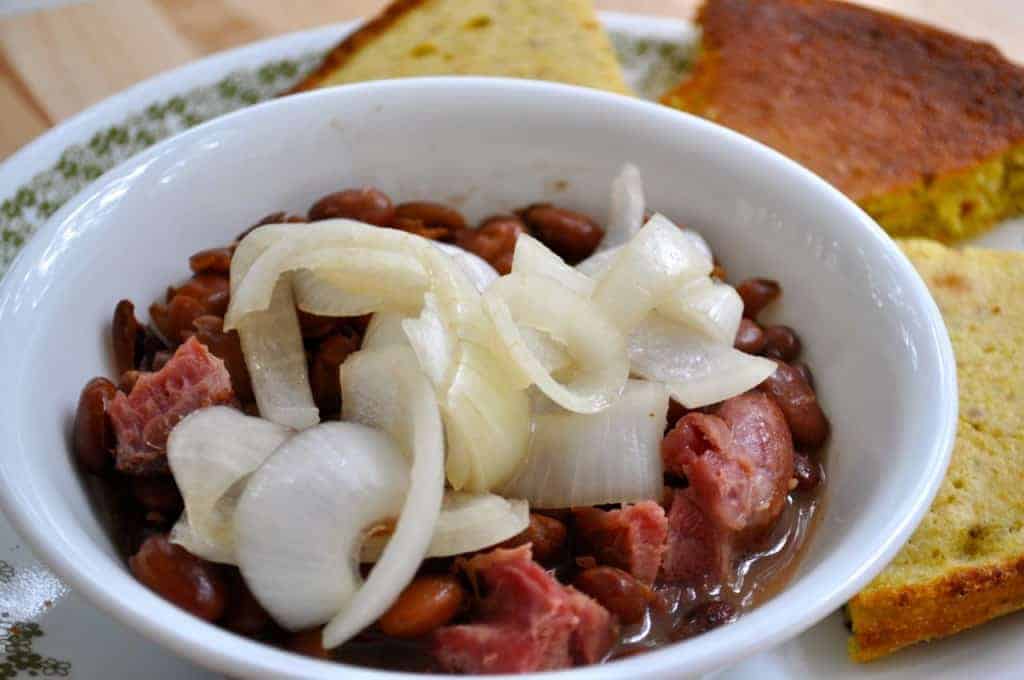 Today before I teach you how to make dried beans without soaking them I’m going to talk about a subject that I may have talked about before on Southern Plate, but I’m really in the mood to talk about it today so I don’t really care if I’ve talked about it before. I love that I get to make the rules over things like this! 🙂

Yesterday, I was having a conversation with someone about my “career”. I have to put that in quotes because it’s just tooo funny for me to say in a serious tone. If I had set out to have a “career” that would be one thing, but this all just kinda happened so rather than see myself as someone steadily setting and meeting goals, I just see myself as someone working as hard as I can, enjoying the ride, and not really expecting anything else to happen but appreciating it when it does. I’m pretty sure careers are more focused than that, but I digress (as is my gift)

Anyway, they said something and paused suddenly, afraid they had inadvertently said something that might offend me. I sensed it and laughed as I said “Look, don’t you worry about offending me. I don’t get offended. Even if you tried to offend me, you’d still fail.”

The thing to remember is that most of the time, 90% at the very least, when we are offended by something, no offense was intended. And the other 10% of the time, when someone was actively trying to offend us, well people and situations like that certainly don’t deserve the attention we’d give it by bothering to take offense.

My dear aunt reminded me of a great quote from Dolly Parton that goes well with this “Get down off the cross, honey. Somebody needs the wood.

2. Being easily offended is draining to you, too. Imagine being at peace. having a smile on your face and laying in the sunshine absorbing the warmth and happiness of life. Being offended is opposite of that

Sometimes, people themselves are just offensive. A while back, I spent a day working with one of the most offensive human beings ever to be born on this planet. On every level that I can possibly imagine I had a justified, sanctified, right to be offended. I endured it, I got over it. Rather than being offended for myself I felt sorry for him and all that have to endure him while I no longer have to. I had a victory party after that day – and a few showers.

Alright, so eventually I have to talk about food so here’s the deal. Today I’m going to show you how to make dried beans without soaking them ahead of time and without having to pay any attention to them during the cooking process.

Because I’m too unorganized to remember to soak my beans most of the time and I prefer to be neglectful of food that I’m cooking whenever possible.

There are many virtues to dried beans. They are a great source of protein for meatless meals, they taste AWESOME, I grew up on them, and they are a much more budget friendly than canned ones but at the end of the day, sometimes you just need a big bowl of pintos and cornbread for supper. It’s good for the soul.

This method and recipe is not just for pintos though. You can use this to make any type of dried bean you like: Pintos, navy beans, northern beans, black eyed peas, black beans, limas, etc. If it’s a dried bean, you can cook them this way, without soaking. Just take your favorite bean and picture it in the photos of this recipe because it will work.

So lets get started. 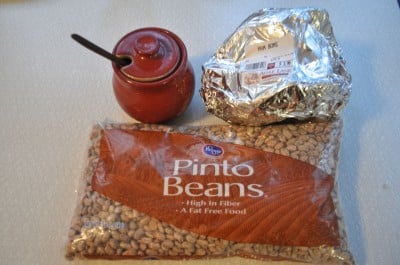 You’ll need: Slow Cooker, beans, salt, pepper, water, and preferably a smoked turkey leg to season it with. Pepper is not pictured here and is optional. I use it but I don’t force it to have it’s picture taken when it’s not in the mood. 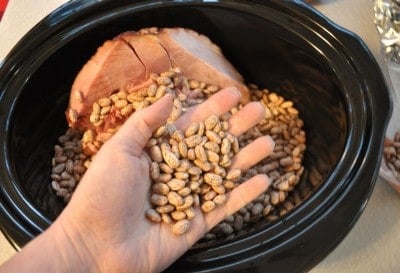 Sort your dried beans and place them in a slow cooker with your turkey leg.

By “sorting” I mean look through them a handful at a time and make sure there are no stones. This is just part of life with dried beans. Sometimes, while being harvested, stones hop up from the fields and the machines can’t tell them from the beans so we have to do that on this end. 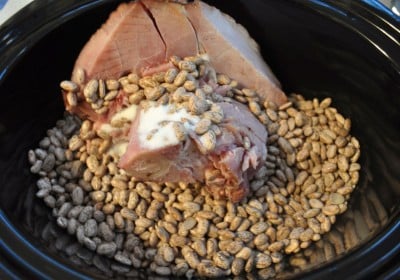 Add in your salt (and pepper if using)

This quantity pictured is a measurement my grandmama refers to as “a good bit”.

Fill up with water, to about an inch from the top. 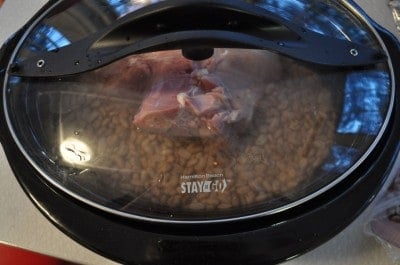 Cook on low 8 hours. You can cook them for longer than that if work keeps you away. I have cooked mine up to ten before, no worries. As long as you have a fairly new model slow cooker (I recommend one that has been purchased within the last five years) and enough water in there, it’ll be just fine.

I often cook these overnight and then turn the setting to warm during the day so I can have them for lunch and supper but they also work great to put on first thing in the morning for supper that evening. 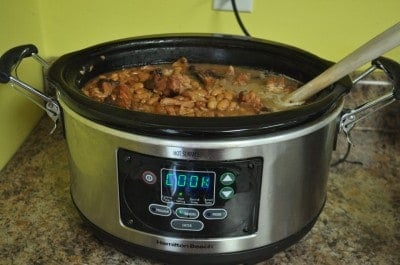 When you remove your lid, poke at the turkey a bit until it all falls off the bone, then stir it up in there – but throw the bone away because you probably don’t wanna eat that 🙂

Note: The color of the walls in my kitchen are “sweet buttered corn“, not “putrid peas mashed together with a lemon” as my camera and lighting portray it in these photos 🙂 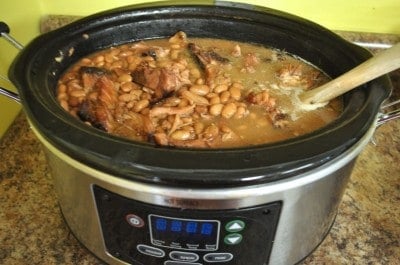 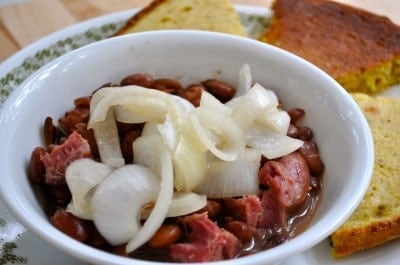 Pictured here are these beans topped with Pickled Onions and Mama’s Mexican Cornbread.

WHOOWEEE, What a meal! And that folks is how to make dried beans without soaking! 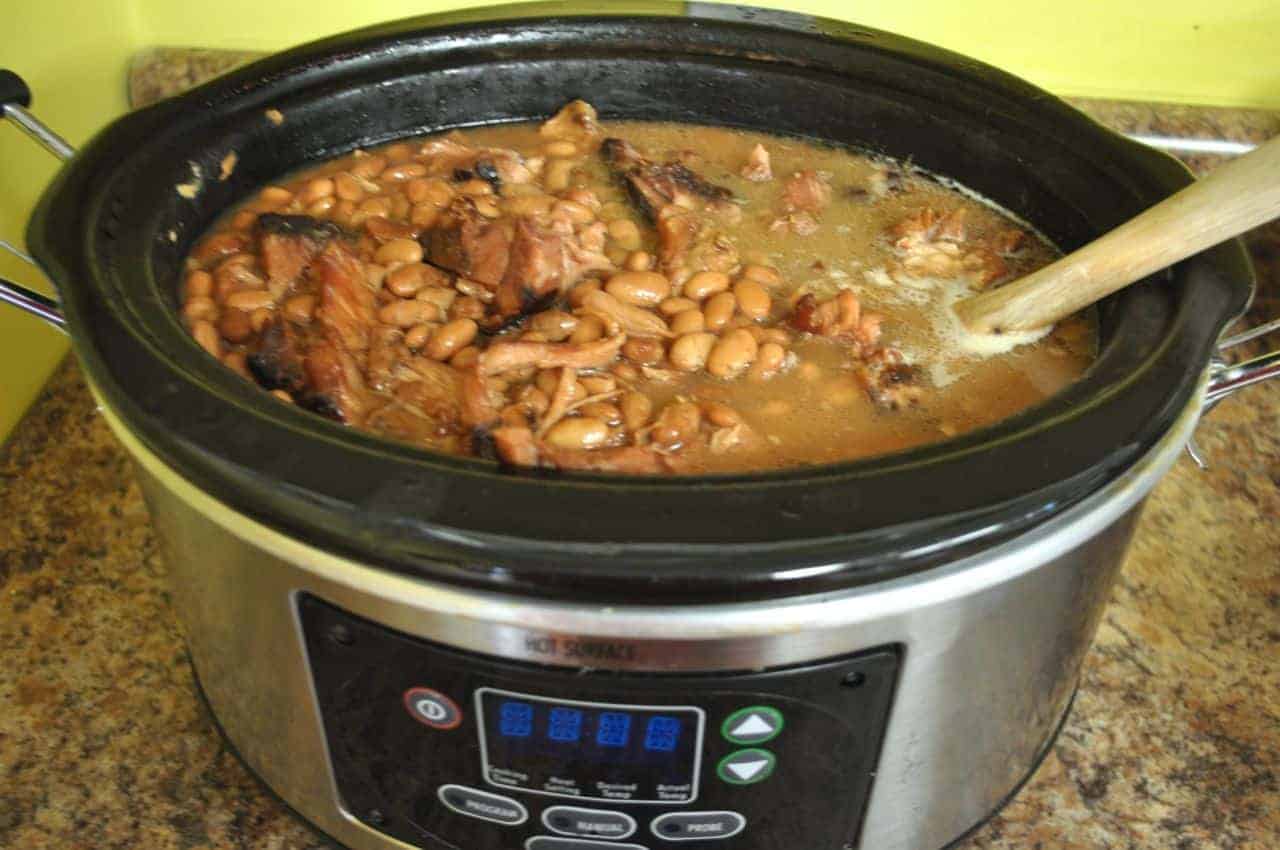 Let me show you how to make dried beans without soaking them ahead of time and without having to pay any attention to them during the cooking process.
Print Recipe Pin Recipe
Prep Time: 10 minutes
Cook Time: 3 hours
Total Time: 3 hours 10 minutes
Course: Appetizer
Cuisine: American
Keyword: beans
Servings: 4
Calories: 215kcal

Whenever anyone has offended me, I try to raise my soul so high that the offense cannot reach it.

I so adore you and your writings, but have to laugh at my misunderstanding of your heading about beans and being offended. Beautifully written, I initially thought it had to do with perhaps adding of baking soda (as my mother use to do) to the beans to prevent gas! Almost kept my silliness to myself, however thought perhaps it would give someone a laugh, as well.