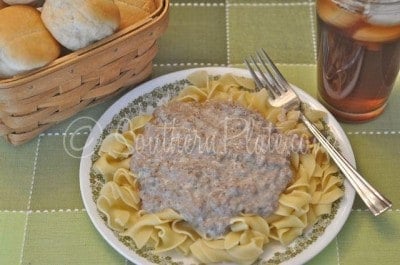 Have you ever heard of Antoine Dodson? He is our latest hometown hero from Huntsville, Alabama and I gotta tell ya, I love that man. If you don’t know who I am talking about a quick google search will enlighten you plenty. There was a big news story a while back about him rescuing his sister from an attack in their home, which happens to be in what is known as the projects of Lincoln Park.

I have a point to this. You see, there are a few parallels between Antoine and me. He is from Huntsville, Alabama, so am I. I also have connection to Lincoln Park. Those projects have fond memories for me, though. You see, my great grandmother got to live there right after they were built. I say “got to” because that is how she viewed it and always talked about it. In her whole entire life of sharecropping and living in little shack houses provided by the land owner, her little home in Lincoln Park was the first one she could call her own and she sure was proud.

Growing up, we lived just a few streets over from those projects, in a tiny little house in a tiny neighborhood dotted with other tiny houses – but at the time our house and that neighborhood seemed big as the world. The kids in that neighborhood were plentiful and most of us lucky enough to have bicycles, with the common sense to put them up at night lest you find it with a new paint job and under someone else’s ownership the next day. I’ll never forget when my brother had his bicycle stolen from our front yard, it broke my Mamas heart not to be able to replace it immediately. She ended up selling some silver coins she had collected since she was a little girl to be able to buy him a new one.

The irony was that my dad was a Huntsville police officer and his patrol car was parked in the driveway at the time, but I guess some kid had just wanted a bike for too long and too hard and his parents didn’t have the raising themselves to be able to teach him right from wrong.

I think thats how things like that start. I wouldn’t be surprised if that kid ended up in the back of my daddy’s patrol car later on in life, probably one of the ones my dad took through McDonald’s drive through and bought supper for before taking them to the jail at night because my dad had spent so much of his childhood going to bed hungry that he couldn’t stand the thought of some other kid having to do the same.

All in all though, it was a good neighborhood. One of those where everyone was on a level playing ground, nobody worrying about the haves and have nots, because we were all have nots, and all we cared about was getting as much fun and adventure into each day as we could.

We’d roam from yard to yard, news traveling along the neighborhood grapevine when Miss Sandy was making popcorn and passing out paper bag fulls of it at her back door or when My Mama had made a new gallon of kool aid and would meet all of us in the yard with stack of cups and an old milk jug filled to the brim with whatever flavor she’d come across first. We were like little torpedos, running here and there, playing kickball in the one empty lot on our street or learning to climb fences to get from one yard to another even though there was a gate that worked perfectly well. I have a four inch scar on my leg from climbing those fences, thats when Daddy took it as his personal mission to bend all the spikey tops down on the chain link ones near our house.

Living next door to us was Mama’s Aunt Myrtle and her husband, Tip Tipton. Gosh those were good people. My sister Patti and I used to go swing on their porch in the afternoon, Tip would sit there in his rocking chair and greet us with his deep voice as we walked up for a visit. He called my sister “doughbelly” because she was pretty young at the time and still had that cute little toddler belly about her “Hey there, doughbelly, you come to see me?” It was always said with such affection that we’d grin and nod, making our way to stake a claim on their swing.

Patti had my dad’s thick hair and Mama would braid it going down her back almost every day. My hair was fine like Mama’s and would be put up into two pony tails, one on each side of my head. Our Papa Reed and Tip would always say that they were gonna cut my pony tails off and put it on their ponies and cut my sisters braid off to put on a pig. We thought that was hilarious and I used to try to picture what my hair would look like on a pony, deciding that even though it was fairly long it would be far too short to look right and Patti’s hair would never be the right color for a pig because it was brown instead of pink.

Those days flew by but we got every single second of goodness out of each one. We lived life at full speed, full of curiosity and energy and a need to run and play.

I can’t imagine having a richer childhood.

I go back there a lot, whenever I am in that part of town I just can’t seem to resist. As I drive my car down the road I go at bicycle speed and roll down my windows if its warm, taking the time to stop on the road in front of that little house. I know this sounds crazy but I think it remembers me. I’ve always wanted to take a picture of the house but another family lives there now and I don’t feel I have the right to so I just stare at it a minute- and I can still see my seven year old self running up onto the porch and barreling through that front door to tell Mama about my latest adventure or ask if a friend can come for supper.

Last time I was there I saw a bicycle parked out front. I hope that kid puts it up at night…and I hope he or she knows how lucky they are to be able to start their life in that little house.

From humble beginnings comes great things, whether it be lives, memories, or food. Today I’m bringing you some humble food along with my story, but its another family favorite. This recipe came from a Huntsville firefighter named Phillip Lee, who made it for us one night when we were volunteering at the Fraternal Order of Police lodge thirteen or fourteen years ago. I’d never had beef stroganoff before and I asked Phillip how he had made it. He looked at me with a grin and said “Well Christy, I’m gonna tell ya, it’s one of those real difficult recipes..” ~snickers~. I hope you enjoy the simplicity of this as much as I do. 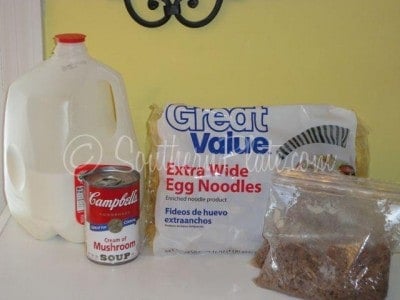 You’ll need: Cream of Mushroom (you can use fat free if you like), egg noodles (you can also use spaghetti, rice, or other noodles), ground beef, and a little bit of milk.

I cook up batches of ground beef and put them in little baggies in the freezer so that cuts out an extra step right there. 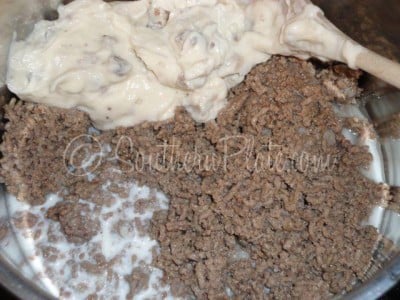 Place your cream soup, milk, and ground beef in a sauce pot. 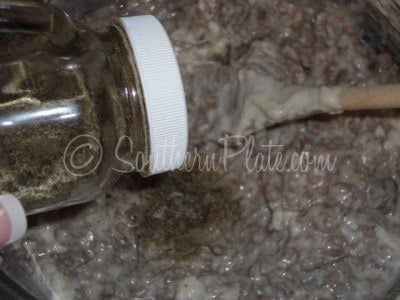 I like a good bit of pepper in mine but you can pepper to suit your taste.

Remember, your guests can always add more pepper but they can’t take it out so it is best to under season if cooking for someone you’re not used to cooking for. 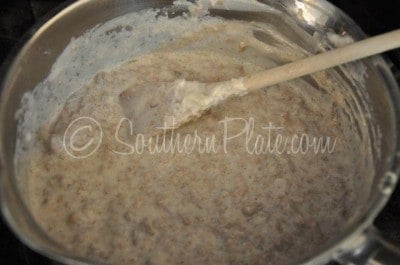 Stir that up good and cook over medium heat until nice and bubbly.

This won’t take long at all so go ahead and get your noodles cooking and rolls a browning! I am using brown and serve rolls for this but Jordan Rolls go great, too, if you want to make homemade!

Serve over egg noodles, rice, or whatever pasta you have on hand.

Enjoy and be thankful for the simple things in life 🙂

People are like stained-glass windows. They sparkle and shine when the sun is out, but when the darkness sets in, their true beauty is revealed only if there is a light from within.

Thank you to Rebecca Roy for giving me this quote. I’d love for you to submit your quotes by clicking here.

I love love love your stories. They remind me of my childhood.

I made this last night and it was really good! Like some others mentioned, I browned the ground beef with diced onions and minced garlic. I also added some sliced mushrooms. And, I served it over egg noodles with a dollop of sour cream on each serving. It was so good, and fast and easy! Lol, my husband plans on having the leftovers over toast (SOS). Thanks so much for another recipe I will be making regularly, Christy!

I am so glad to hear that you liked it Samantha!!!!

Hey Christy! I remember eating lots of this when I was first out on my own at seventeen – along with tuna noodle casserole and Spanish rice! Now that I look back I grew up poor, but never knew it! We had a roof over our heads, clothes and food. Guess it’s all a matter of perspective.

Hey Dorothy!! It is all about perspective, isn’t it?!