Just a note: We no longer eat pork. If you like, you can adapt this recipe for another meat or use it as is. 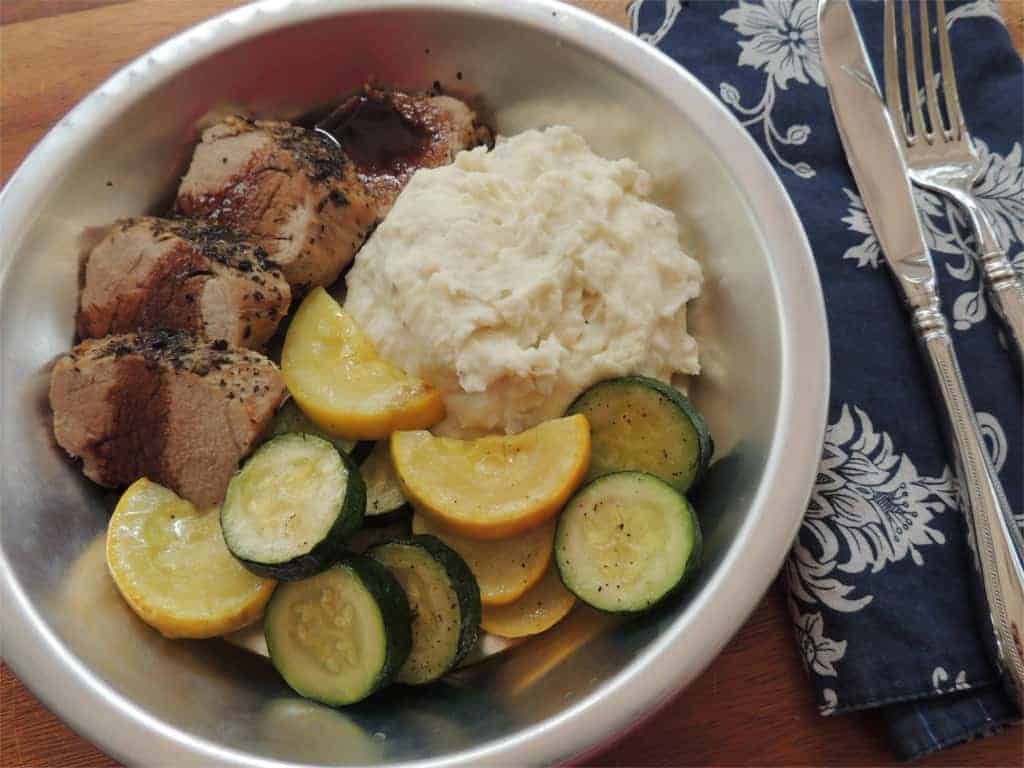 You’re looking at a photograph of our Sunday dinner from yesterday. This is an EASY PEASY meal to throw together but sure won’t taste like you took any shortcuts!. Roasted Pork Tenderloin with balsamic reduction, MeMe’s Mashed Potatoes, and a light and lovely Squash side dish. All of this was thrown together in about thirty minutes, counting prep and cooking time. Today I’m going to share the recipe for the pork tenderloin and balsamic reduction with you, the Mashed Potatoes recipe can be found by clicking here, and the squash dish can be found by clicking here.

But first, it’s Monday and I want to chat a bit 🙂

I have a lot of neat things in my kitchen. Vintage items I’ve picked up from time to time, family heirlooms, mason jars filled with dried beans and corn sitting 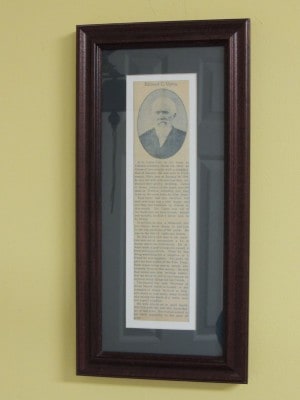 on the counter rather than in the pantry because they’re just too pretty to put away, enough Pyrex for a museum, and even an obituary of Mr. Edward C. Upton, professionally framed and hanging at eye level directly across from the main entryway to the room.

Usually, when folks spy the obituary they ask if he was a relative. My reply is “No, I found that in an antique shop and figured that if I could live a life where folks would write an obituary like that about me, I’d really done something.” At this point their curiosity is piqued and they mosey over to read it, and then come back to me with a smile of understanding.

I happened upon the newspaper clipping of his Obituary in an antique shop during my college days and, being my mother’s daughter, paused to read it. The words written about this precious man warmed my heart so I bought it and paid to have it framed. It has hung in the kitchen of every place we’ve ever lived as a reminder to me that I need to be the kind of person I want to be today, instead of dreaming of the person I might become tomorrow.

Lest you think I’m trying to bring you down, I thought I’d share the obituary with you today in hopes that you’ll feel as inspired as I am by it. And I want to assure you that though this was written in another era, technology has changed but basic human makeup has not. People like this still exist and from what I know about the folks who read this site, you’re more than likely one of them.

E.C. Upton died at his home in Trenton township March 4th, after an illness of two months with a complication of diseases. He was born in Clark county, Ohio, and on January 28, 1908, he and his wife who survives him, celebrated their golden wedding. James C. Green, justice of the peace, married them in Trenton township and they lived on the same farm for fifty years.

They never had any children, but their marriage was a very happy one and they had hundreds of friends in this county. Mr. Upton was one of the finest men we have known, honest and upright, he didn’t know how to do wrong.

In politics he was a ____ and you always knew where to find him on the big questions of the party. He was on the side of right and justice.

He was not a rich man as his ambition was not to accumulate a lot of money which he could hoard. He always made a good living and owned a farm and enjoyed life. When he was doing something for a neighbor or a friend he was happiest. For years, he paid for four copies of the Free Press, three copies being sent to people who formerly lived in this county. He said that would have him writing letters, but we think he did it also because he enjoyed doing things for his friends.

The funeral was held Thursday at Green Mound which is located in the township in which he lived so long and where he had many, many friends who mourn the death of a noble and good neighbor.

His wife who is not in good health will live with Mr. and Mrs. Jaco Beaber of this town. Her friends extend their sympathy in her hour of grief.

At the end of our lives, I doubt anyone’s obituary will read “He/She had a lot of facebook friends.” or “They updated their status religiously, our newsfeeds will never be the same.”

The world of new media can never replace the importance of a hug, a face to face conversation, being a person of honor, or being a friend to others.

Inspire someone today. Don’t wait for a stranger to write your obituary, make your life count for something now.

Note:I left the political party out of the obituary because folks don’t come to Southern Plate to hear about politics. 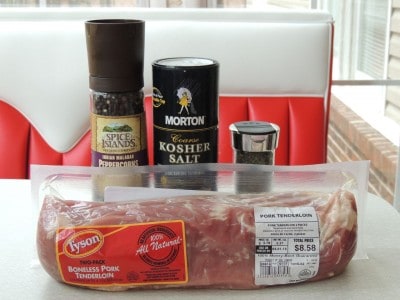 To decide which herb I want to use in a dish, I usually just open the lids and smell them to see what I’m in the mood for. I’m sure there are more complicated ways to do this, because there exist people whose only goal in life is to come up with complicated processes for pretty much everything, but my smell method has always served me well so I’ll just stick with that. Life is complicated enough. 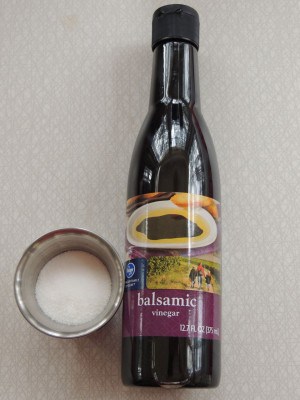 For the Balsamic reduction, all you need is Balsamic vinegar and sugar. 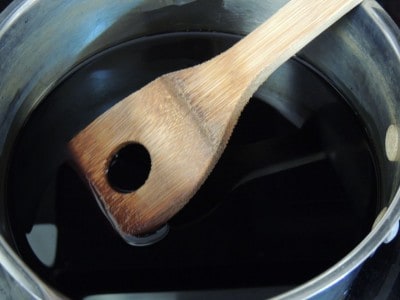 First off, we need to make our reduction. I know that word sounds fancy but it’s not. All it means is that we’re going to cook this until it boils down to about half as much. If you don’t like Balsamic, this tenderloin is also delicious without it so feel free to skip these steps. I LOVE the gentle, yet sweet tang this gives it though. My husband, who is not a vinegar fan, also really enjoys this.

Pour balsamic vinegar into a saucepot and place over medium heat, stirring often. 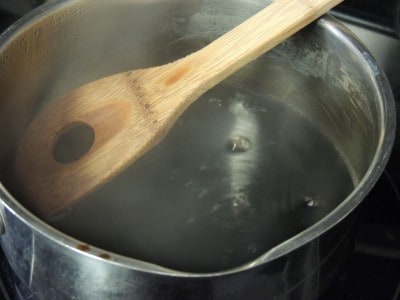 Once it comes to a boil, reduce heat and simmer until it’s cooked down to about half as much as you started out with, still sturring often.

This will take about ten minutes. During this time, prepare to have your sinuses cleaned out with the vapors! 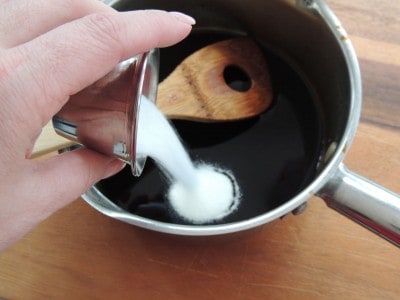 Remove from heat and stir in sugar until dissolved. Set aside and let cool. I like to refrigerate mine to get it even thicker.

You can even make this the day before if you want. 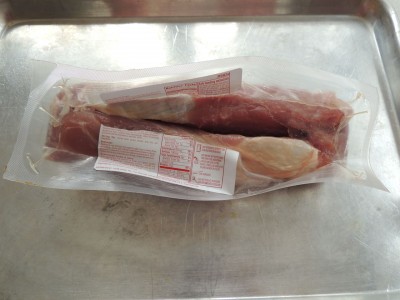 Now that big old package I showed you at the start actually has two pork tenderloins in it.

I’m going to freeze one for later because one is plenty to feed my family.

To help keep our grocery budget in check, especially if we have a more expensive meat, I usually make plates in the kitchen, put one meat serving on each, and then load up on veggies. 🙂 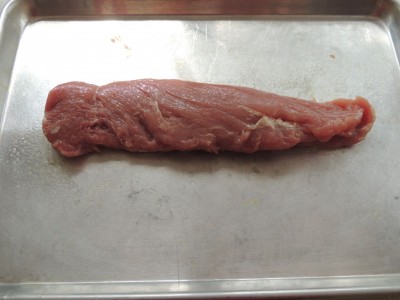 Place your pork tenderloin on a greased baking sheet. 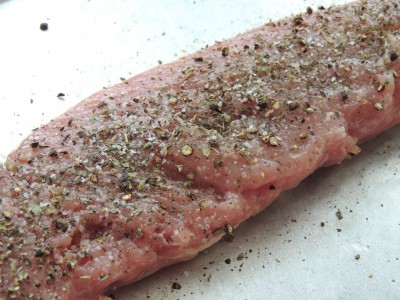 Sprinkle BOTH SIDES with cracked pepper, dried herb of your choice, and kosher salt.

You can just eyeball this but if I had to guess how much I used I’d say about a 1/2 tsp coarse pepper, 1/2 tsp kosher salt, and 1 teaspoon dried herbs per side. 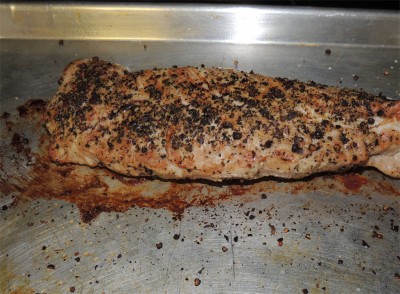 Flip and bake 10-15 minutes more, or until no longer pink in the center. I stick a sharp knife down in the middle and open it up a little bit to have a peek.

Remove tenderloin from oven and allow it to rest for 5-10 minutes before slicing.

I’ll be sharing the recipe for my squash and zucchini side dish later in the week! It goes wonderfully with this Roasted Pork Tenderloin with Balsamic Reduction. 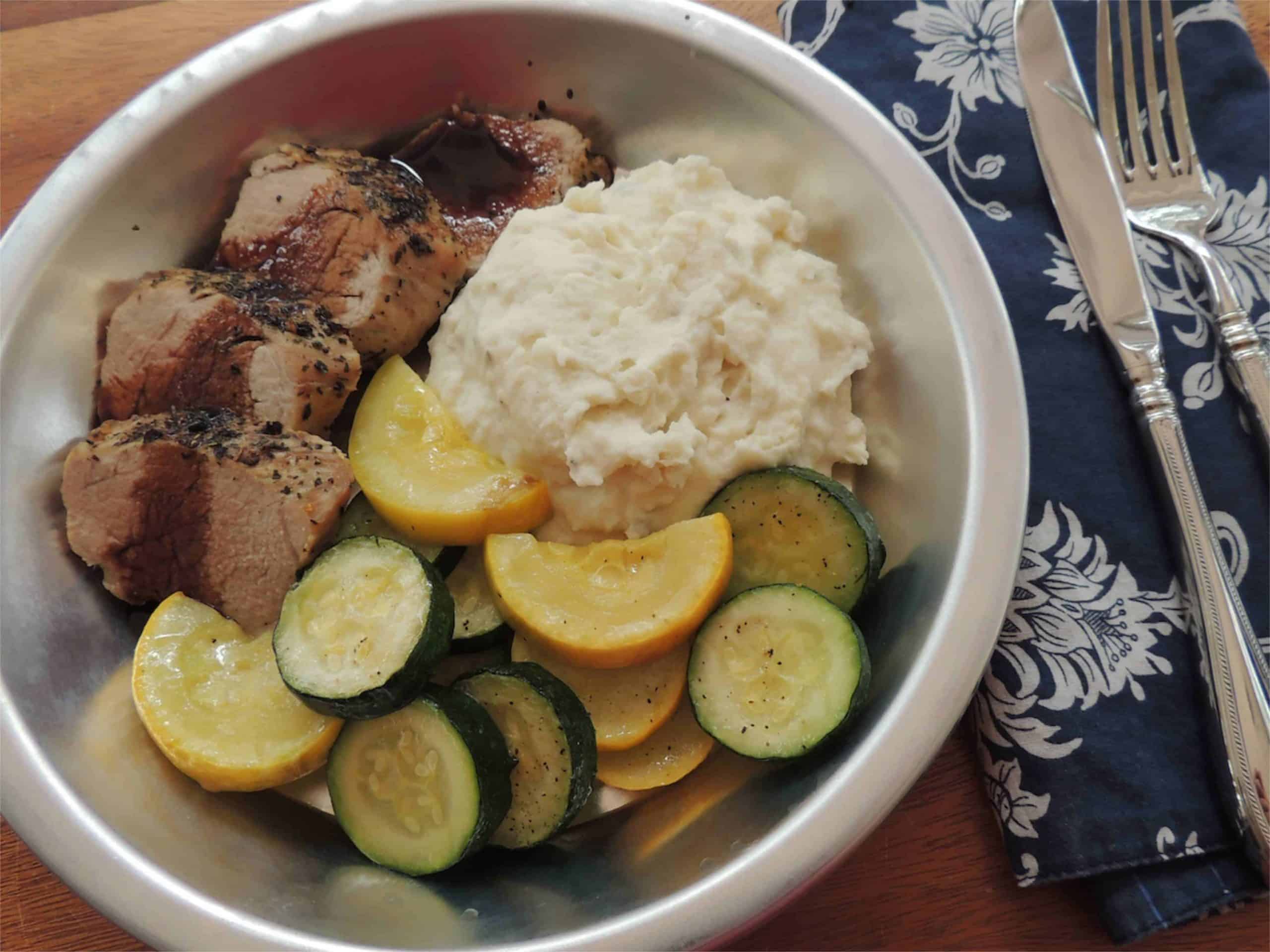 “As you read my stories of long ago I hope you will remember that the things that are truly worthwhile and that will give you happiness are the same now as they were then. Courage and kindness, loyalty, truth, and helpfulness are always the same and always needed.”

Submitted by Jenny. Click here to submit your quote!

< Previous Post
35 Ground Beef Recipes to stretch your Food Dollar!
Next Post >
Simple Squash and Zucchini – Fall Over The Fences If You Have To