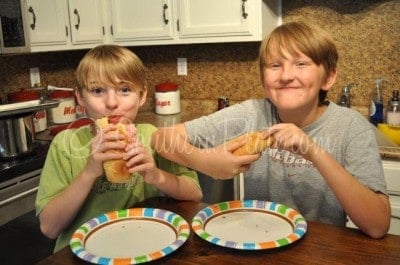 My son and all of my nephews love sub sandwiches. Their favorite “fast food” place is Subway so when Brady’s birthday was on the horizon, all of the nephews got together and decided that Aunt Christy should buy Subway for everyone at the party. ~blinks~ Now keep in mind this is five boys, all around the age of twelve. You know the age where they eat everything but the kitchen table, still claim to be hungry, and still have ribs poking through their skin? The age where you can get a 50% raise in pay, clip coupons til the cows come home, and still wonder how you are going to afford to feed the boy who has turned into an eating machine?

I asked a few of them what they would want from Subway and realized that most of them had in mind not one, but two twelve inch subs. ~raises an eyebrow~ It didn’t take long for Aunt Christy to explain that I could not afford to do something like that. Instead I offered them the option of having a sub bar at Brady’s party. “Aww but you can’t toast them like they do at Subway!” “Yours won’t taste like theirs does!”

I stopped what I was doing and turned to them and offered The great revelation (at least that is how it was viewed by them). “Boys, did you know that I used to work at Subway?” Their eyes got big as dollars as they looked to one another, trying to decide if I was pulling their leg. Of course, they didn’t believe me so Brady went and asked his daddy, and then called his grandmother for further verification. Once they all realized it was true I was subject to an intense grilling on the mysteries of sub sandwiches (truly, there are none but the boys like to think so) and then given permission to make the sandwiches for his party.

I asked Brady and the other boys what they liked on their sandwiches and headed over to the grocery deli to pick up my supplies. I made them just as they said and toasted each one. The boys declared these the best subs they had ever eaten and Brady said “Wow Ma, you really ARE a good cook!”

Note to self: impressing Brady is waaaay simpler than you thought.

Now I’m gonna tell you the inside scoop on my stint at the home of Jared, the part that I didn’t tell the boys: I worked at Subway a grand total of 3 months when I was sixteen. It is the only job I’ve ever been laid off from. Their reason ? I couldn’t make a neat sandwich! After my first month there the manager wouldn’t let me make sandwiches anymore and assigned me to work the cash register only. Fortunately for me,  “neat sandwich making skills” aren’t nearly the requirement in life as I had previously thought. ~snickers~ 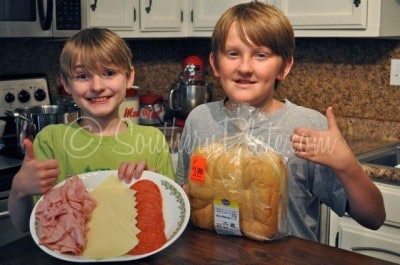 This is Brady and Drew, two awesome guys who love to cook and eat subs 🙂

Oh, and some sub rolls. 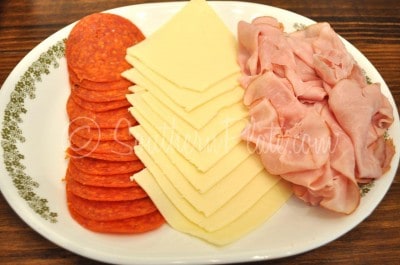 You can use the small pepperoni that you buy in a package if you prefer.

Of course, you can really add anything you like to this, I’m just showing you what the boys used.

You get brownie points for adding a little sister who really wants to be in the picture and is kinda getting on your nerves. 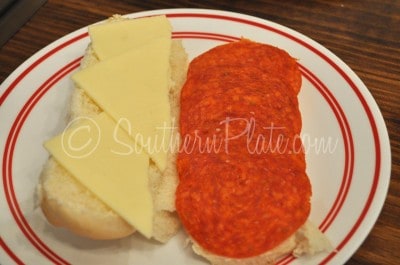 Slice your sub roll in half lengthwise and place some cheese on one side and pepperoni on the other. 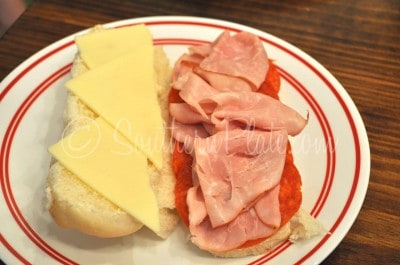 Then top with ham. 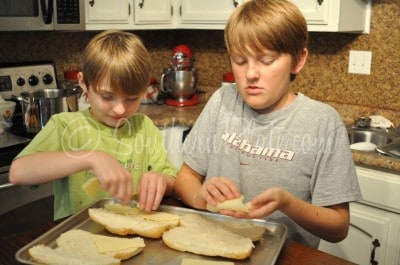 The boys were really focused on doing this… 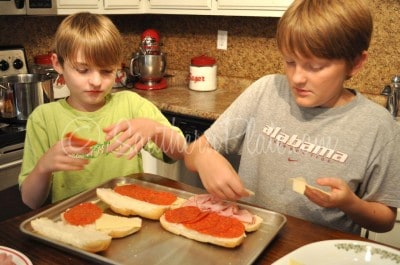 and they did a great job 🙂 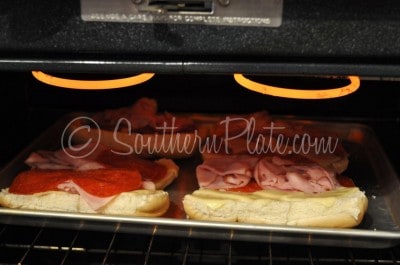 Place the sandwiches on a large baking sheet and put under the broiler in the oven for 2 or 3 minutes, watching closely so they don’t burn.

Please don’t let your kids do this step, but do it yourself. The oven gets very hot and it’s easier than usual to burn yourself when cooking like this. 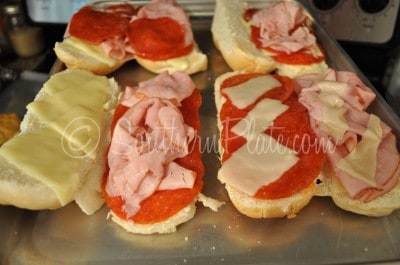 Remove them when the cheese is melted. 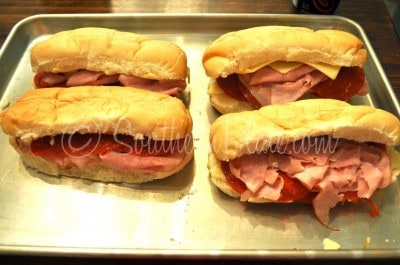 Then carefully close each sandwich and place it back in the oven to toast on top.

I read something the other day that said “You don’t need more hours in the day. God has given you plenty of time to do what He wants you to do.”

Wow, isn’t that an eye opener? So basically, all of the things that have us running around like chickens with their heads cut off are things that we’re putting on our own plates. ~blinks~ We gotta clear our plates off a bit so we can enjoy what we have. I’m pretty much giving myself a pep talk here and just kinda adding y’all to it by default ( I do that a lot, I know). Oh yeah, my point was that I’m not gonna put “learn photoshop” on my plate, which brings us back to my original request of “Please pretend this photo isn’t so yellow”. 🙂 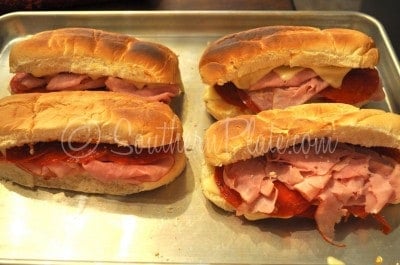 Woops! did I burn those in the back? Nahh, I just toasted ’em really good ~winks~ 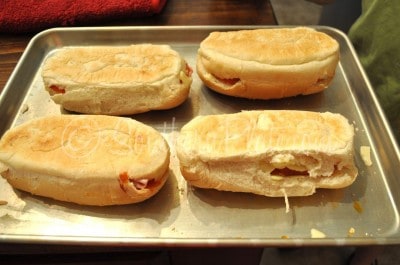 Then I turn them upside down and return them to the oven to toast on the bottoms for a minute or two. 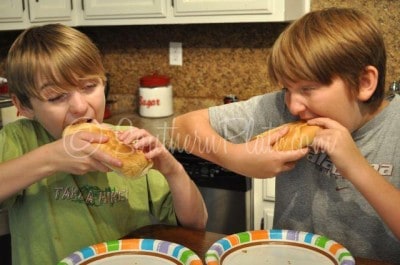 And now for the taste testing!

Brady and Drew give them a thumbs up!

I’m also passing on the “recipe” for my nephew Austin’s Subinator below as well. Can you tell the boys came up with this name?

Place meatballs and pizza sauce in slow cooker and cook for several hours on low, or until meatballs are heated through (you can do this in a pot on the stovetop to save time if you like). Slice each sub roll in half lengthwise. Place cheese inside sub roll and then place 4-5 meatballs inside it. Spoon a few tablespoons of pizza sauce inside and serve.

“There is a calmness to a life lived in gratitude, a quiet joy.”

Submitted by Debbie Strum. Click here to submit your quote or check out more of our ever growing collection. Motivation and inspiration await!

I set my broiler to high ( not sure how to use it ) and the cheese melted in like 1 minute! I’m glad I kept an eye on it like you said. Also, toasted the tops reallll good only took about 30 seconds. Thanks for the tips!

I have been burning bread such a long time, that now my family likes burned bread! Never give up!

Yes, God does give us enough hours to do all that He has for us to do every day, but if you notice, it keeps us too busy to get into trouble! No time for gossiping, no time for doing the wrong things, etc. Yes, sometimes it can get overwhelming, but when you remember that idle hands are the devil’s tool, it’s good that our Lord gives us so much to do. Love the subs–this is how I’ve always made them, except I used to use the loooong loaves of french bread from the deli and everyone chose their own section to build on! My boys and their friends loved it! Thanks for such a great post (I didn’t notice too much yellow in any pictures–it all looked good to me!)

Christy–This is my family’s ALL TIME favorite sandwich!!! Thank you so much for sharing this recipe! It’s so easy to make on the nights we have to get out of the house quick for ball games, and keeps them full!

I’m truly enjoying the design and layout of your site.
It’s a very easy on the eyes which makes
it much more enjoyable for me to come here and visit more often.
Did you hire out a developer to create your theme?
Outstanding work!

Thanks for finally talking about > The Subinator ~And Why I Got
Laid Off From Subway | Southern Plate < Liked it!