Home » Breakfast » 2 Minute English Muffin Breakfast – I Want To Raise My Kids In A Barn! 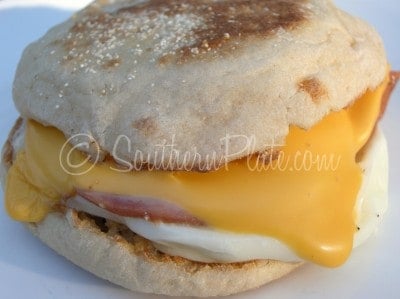 Jump to Recipe
I want to live in a barn. I always have. Don’t get my wrong, I dearly love Bountiful (and have already dug in my heels and hung my heart on the wall ), but I have this dream of finding an old barn and completely remodeling it into a big old house, with heavy oak beams and polished wood floors. The outside would have to be red, barn red to be exact, and I’d likely have someone paint “SEE ROCK CITY” on one side of the roof as a nod to where I’m from. I’d have a big old southern style front porch going all the way around it with white railings and rocking chairs, lush green ferns hanging at regular intervals.

I’d have the original doors fashioned into sliding ones and paint their little support beams a contrasting white. We’d fix a new door on the sides, traditionally sized with a screen that had a wooden frame and spring so it would bang a few times whenever anyone shut it.

Of course, it would have to be atop a hill so that the sun hit it just right every morning and silhouetted it against the sky. And it would have to be int he South, because I can’t leave my homeland and I want the grass to be always green for my little view atop the hill.

Just think of the fun we’d have, especially the kids. Living and growing up in a house that echoes. With walls the color honey wood and real clocks with real pendulums that tick-tock tick-tock. We’d have to fashion several windows because I have found that my level of happiness is directly related to how much sunshine I get on any given day, and I want the house to be lit with as much natural light as possible.

I’d put my great grandmother’s chair right there in the lving room and drape her woolen plaid blanket over the back just as it was when she was alive. Beside it I’d set a large basket filled with embroidery supplies and a mason jar of candy corn just like my Grandaddy always had by his chair to offer to  kids who peered over his shoulder to see what he was up to.

The yard would be even, with the perfect slope atop that hill for rolling down. Kids would find it irresistible to run in and I’m sure I’d join in as well from time to time. Each window would have to have a window box, filled with daffodils in the springtime, geraniums in the summer, and pinecones that we collect for the winter time and would use to help start fires in the massive stone fireplace in the center of it all.

I could finally have those chickens I have always wanted and we’d have at least two more cats along with a friendly old lab who’d thump his tail against the porch railing every time someone came near him and dive after rocks folks threw in the pond for sport.

Just think of how much my children could get away with when they grew up. No matter what they did, they could always fall back on the excuse of “Hey, I was raised in a barn!”.

Today I’m bringing you a hearty breakfast that is no muss, no fuss and made in a jiff. Folks, did you see that gorgeous pic up there? That was made in the microwave. Seriously. No skillets to clean, no muffin pans or baking sheets to wash. Get you a plate and have breakfast in under two minutes flat.  I try to start my day off with protein rather than carbs and this is a great way to do it. In case any of you aren’t morning people (I am soooooooo a morning person – but married to the opposite) it might encourage you to know that you can also make it , start to finish, with one eye still closed. 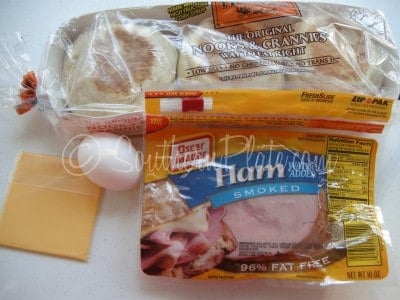 You’ll need: An egg*, slice of cheese, slice of lunch meat ham, and a english muffin.

Here is where you can go crazy with the healthy stuff if you’re so inclined. They have high fiber muffins, low fat cheese, lean lunch meat, and nowadays they have eggs genetically engineered to do just about anything so just go shopping and knock yourself out.

Me? I just use what we have on hand and my only preference for eggs is that whatever laid it clucks of its own accord.

Another cool thing about these ingredients is that if you buy them just for this, when you run out of English muffins you got the makings for a nice little sandwich. 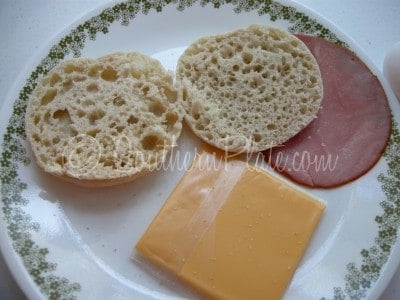 If you want, you can toast it. I like to toast mine but its a toss up on any given day whether or not I’ll go to the trouble. 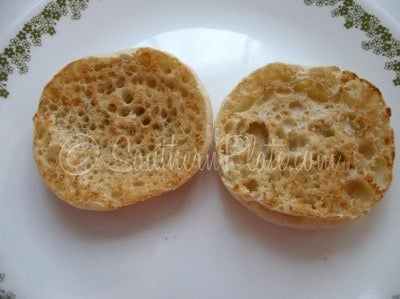 I am somewhat in between toasters right now so I just stick mine under the broiler for a few minutes. 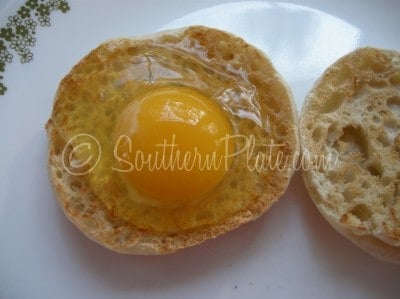 Here is the careful part. Crack open your egg onto one of the english muffin halves.

NOTE: You can also cook your egg in a microwave safe 8 ounce ramekin and then place the cooked egg on your english muffin.

Try not to let it run over but if it does, don’t sweat because it is no big deal. It’ll just cook on the plate alongside the muffin and when you’re done you can scoop it back up onto your muffin with a spoon. I was just realllly being careful for this tutorial but normally – blah! Crack the egg and don’t fret.

Now take the other half off the plate and microwave the half with the egg on it for about a minute. Keep an eye on it because each microwave will be slightly different. It will puff up a bit but should be done in 45 seconds to one minute.

Note: I use the smallest egg I have on these to help keep so much from spilling over onto the plate.

Some of y’all have wisely suggested pricking the yolk with a fork. While I don’t do this, because I’m such a wild child and all of that, its a good idea for you to to help vent the egg a bit. 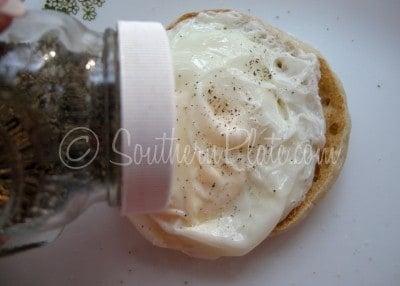 Then I like to put a dash of salt and pepper on mine.

Now this egg will be hard cooked, not runny in the middle, just so ya know – And it won’t taste at all like it was cooked in the microwave.

~clears her throat and begins to sing~

from my head down to my legs! 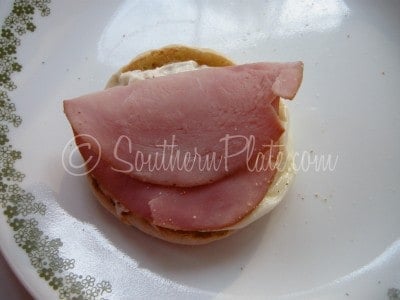 Okay so that’s cooked, put a piece of ham on it (or whatever critter you prefer to use)

It was just one of those fifty thousand question sessions five year olds like to spring on you that sometimes go wrong. Haven’t decided when I’m going to tell her I was kidding about it yet… We were in the sun room a while ago and a squirrel clamored up onto the deck. I saw her cast this wide eyed look of expectancy towards me. Like she thought I was about to go into some mad hunting frenzy. 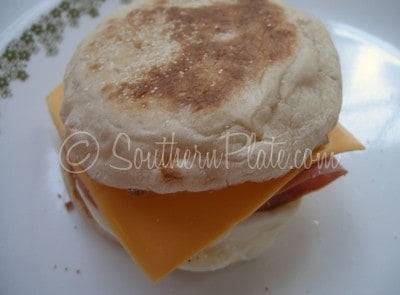 Top with piece of cheese and other half.

Nuke that again just until the cheese melts, about twenty to thirty seconds (again, depending on power of your microwave)

Enjoy you breakfast (or lunch!) 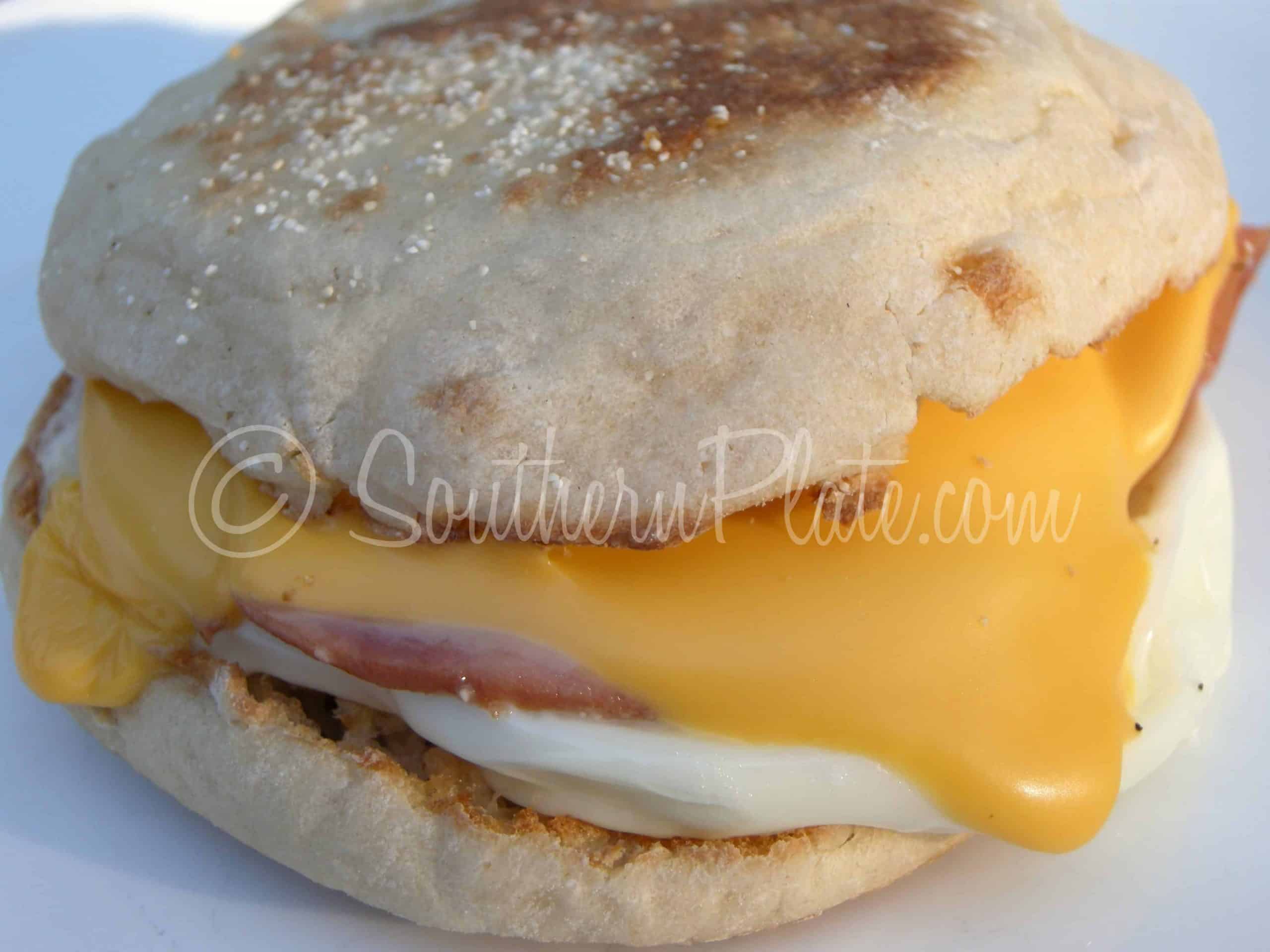 The recipe that is not shared with others will soon be forgotten,

but when it is shared, it will be enjoyed by future generations.

Submitted by Tina. I feel very strongly about this, thank you so much, Tina. What an honor it is to be when someone asks for a recipe. Please share yours with your family. I can’t tell you how many emails I’ve gotten from folks saying someone passed away and their recipes went with them. If you love somebody enough to cook it for them, love them enough to share the recipe as well. 🙂 Submit your quote here.

< Previous Post
Simplified Quesadillas – And Chance To Win $75 in Gift Cards from Kraft
Next Post >
My 10 Favorite Quick And Easy Suppers (and a video!)
Subscribe
Login
180 Comments
Inline Feedbacks
View all comments

This is an easy quick meal. My guys love it. Thank you!

I am so glad to hear it is a hit Kathy!!