Home » Dessert » Candied Apples that you eat with a Fork!

I played around a bit this morning and decided to do a voice version of this post introduction as well. If you’d like to hear me reading this post, please click the play button below the photo. We’ll see how this works. I talk fast naturally, so if ya want you can read along 🙂 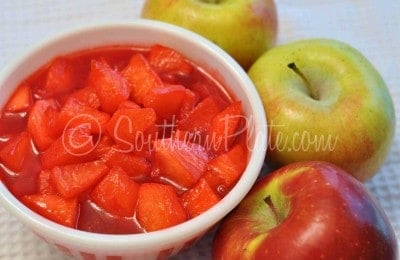 Today I am bringing you a recipe that was shared with me by my friend Jyl, but I gotta tell y’all about Jyl for a bit because she is a hoot and a half, especially when standing next to me. You see, Jyl is from my sister state of Georgia, the north Georgia mountains to be exact, which is surprisingly where my husband comes from. I say surprisingly because anytime you meet a man who is from the north Georgia mountains but doesn’t like gravy, it’s kind of a shock, but I digress.

Jyl’s smart as a tack, got horse sense like nobody’s business, and has been helping me on the back end of things with southern plate. You see, I’m about as cluttered in the brain as they come. Unorganized, skipping from one thought to the next at warp speed, and where most people might plan their blog posts, I’m more of a kind of a “lets wake up and see what I feel like writing today” type gal.

Jyl keeps me straight. While I’m looking at scenery and planning a tea party for the occupants of my car, she reminds me that I’m also driving the train and maybe I should look towards the tracks from time to time. But the funny thing about jyl is that compared to me being pretty high strung and talking-at-housand-miles-a-minute, Jyl is laid back. It takes her a bit to get a sentence out because she thinks before she says things.

Having the personality that I do, I’m kind of baffled by someone who actually pauses in conversation to think! My mama used to say that I wake up talking and don’t draw breath until I go to bed and I reckon I couldn’t negate that, especially if there was any chance of lightning being nearby.

The first few times we talked on the phone Jyl would pause to think or take a breath (two things I don’t do) and I’d say “Jyl, you there? Did we get disconnected?” she’d take another moment just to torture me and then say in her slow mountain drawl, “Yep, I’m here”. I could feel her rolling her eyes at me on the other end.

So I had a meeting recently at my house for the big UNA event coming up (please this post was written in 2010). The head of the alumni association, the head of the department I graduated from, and several other folks of importance (I say this to differentiate them from myself, I’m just someone who cooks for people) came over to meet in my kitchen and talk over the event around the dinner table. It was on a Monday morning and as Ricky and the kids went off to school and jobs, Jyl and I were left to get ready for the meeting. Now Jyl is one of those folks who just pops out of bead ready. Me, I require a bit more maintenance to avoid scaring neighborhood children. So I headed off to my room to get ready, rushing as quickly as I could so I’d have time to clean up the kitchen.

And my word, did the kitchen ever need it. Dirty dishes were in the sink, muffin pans from where I’d made apple spice muffins for the meeting were on the stovetop, baking sheets were dirty from cookies over the weekend and stacked on the counter. Overall, lets suffice it to say my kitchen looked well lived in. REAL well lived in.

But you know, as more and more folks come to visit for one reason or another in connection with southern plate, I’ve had to relax a bit .you see, very few people live in a show home ad we sure don’t. I tell folks “you know how people will say, this is a real working farm? Well this is a real working house” and so I clean and tidy as best I can but I’m not exactly putting fresh cut flowers in vases and strategically arranging throw pillows in the latest fabric trends on my couch. As a matter of fact, if you ever come to my house its best if you don’t lift up a throw pillow, because I most likely stuck a wayward Polly Pocket or Lego building block under it at the last minute right before you arrived.

As I got to getting my face on, Jyl took it upon herself to clean up the kitchen for me. When I walked back in thinking my work was just beginning, it was as if the fairy godmother had just left. My kitchen was spotless. I had no idea how one person could make a room look so good in so short a time, but she had.
Everyone arrived shortly after and I ushered them into the house as we all sat down to coffee and muffins and plotted out our plan for world domination through banana pudding.

I tried to look casual as I sat there, marveling at how clean my kitchen was amid talk of tickets sold and planning the menu (Did I mention we’re feeding around fifteen hundred that night?). They left a few hours later and Jyl and I sat down with glasses of tea to relax a bit. “Jyl, I don’t know what I would have done without you today. I can’t thank you enough for all your help. My eyes got even wider with wonder as I added “Especially that kitchen.”

Jyl cocked her head to the side and looked over at me with a knowing grin as she spoke in her slow deadpan drawl..

“Well, I wouldn’t be too thankful, coz all them dirty dirty dishes you had are in the oven.”

~LAUGHS~ I about shot tea out my nose. It was priceless.

So this is Jyl’s recipe for candied apples that you eat with a fork, for those of us (myself included) who love the flavor of an old fashioned candied apple but don’t wanna put out the effort it takes to eat one. I love the taste of a good old fashioned candy apple (Mama’s recipe is in the cookbook!) but as I get older I find myself not as eager to bite into one of them. Well this is the full flavor (and then some) of a candied apple, that you eat with a fork. Jyl says sere them hot or cold and I agree, but I think my favorite is cold. Least that’s my favorite way this week. If you ever run into Jyl be sure and tell her you like her way of washing dishes. 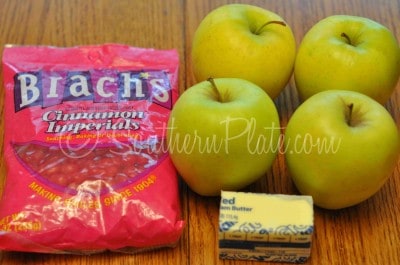 I had the worst time trying to find those little cinnamon candies. I went to Wal Mart first, thinking surely they’d have them. But my Wal Mart had just rearranged everything. You know how folks get used to a store layout and it seems to make sense, so they gotta toss it up in the middle of the night just to keep ya on your toes? I finally found where they should have been, in my mind at least, and came up empty handed. Thank goodness for Krogers, they had them right there on the candy aisle and I didn’t have any problems at all. My third option would have been to try a gas station with a decent candy aisle (as they all seem to have nowadays) 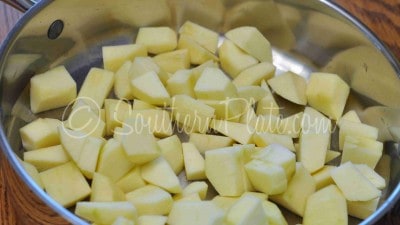 Peel and chop up  your apples and put them in a large skillet.

You can slice them if you like but I wanted mine to be a bit easier to eat, fork size pieces :). 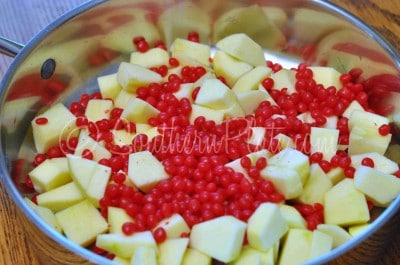 Pour in your candies over the apples. 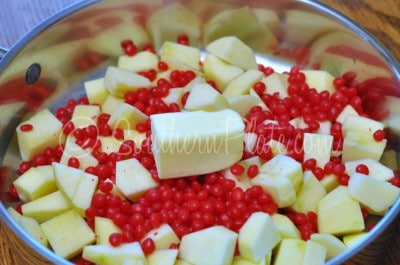 and toss in that butter. 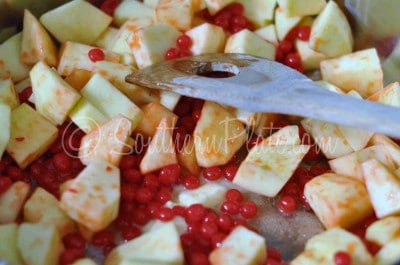 Now put this over medium to medium high heat and stir it up a bit so the butter and candies will start melting as the apples are cooking.

Right about now it looks like it is slowly contracting the chicken pox. Raise your hand if you remember cornstarch baths! 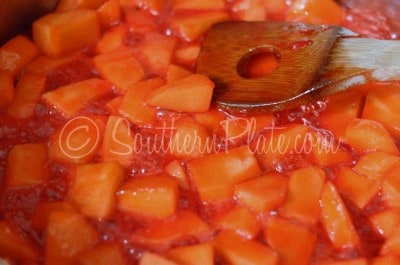 Okie dokie, here we have everything all melted and stirred up. 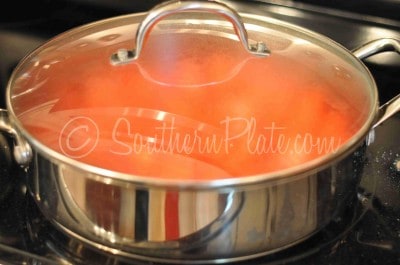 Cover it. Now reduce heat and just let it simmer until the apples are tender.

Unless you like your apples falling apart mushy, in that case knock yourself out!

That is the cool thing about cooking, you do it how YOU Want to. No critics allowed!

If any happen your way, show ’em the back door.

oooh this smells so good. Here are my finished apples

This is a great little side dish or dessert. You can serve it hot or cold. Now I served it hot the first go around and it was really really good, BUT later on I ate some of it cold and WOWEEEEE. Tasted just like a candied apple then!

Candied Apples that you eat with a Fork!

I make my own sunshine.

It comes from within.

A word of caution: Remember to take the dirty dishes out of the oven! I’d hidden dirty dishes in the oven before a gathering and forgotten about it. A couple of days later, an odd smell, while preheating the oven, reminded me!

Girrrrl you know I’ve formed a habit of opening that door every time I go to preheat, lol. Guess what prompted that? lol

I have used red hots to make applesauce for years! Just continue to cook the apples down. The applesauce is such a beautiful color. I was just thinking about making “spiced apples” the other night and wondered if red hots would work. Thanks for the recipe. It’s getting close to apple season here in North Georgia!

I have been making candy apples for years whenever I would fix pork–so yummy!! i always use a variety of apples–some sweet.some tart !I use alittle oj or apple or cider juice to start and then add a handfull of red hots–it makes the house smell like fall ! Next time I make them, I will try your variation! Thanks !!

I will have to try your variation as well!! I love how it makes the house smell too!!

I find it interesting that your friend is from GA and has such a similar recipe to my Grandma’s. She was from Marrietta, GA originally and had relocated to NC. The only difference here is the cooking method and lack of sugar. I was looking for ideas on fixing my Grandma’s recipe with our stove being out of commission. I will try this on the stove top.

Why butter? Mom’s recipe called for red hots, sugar, water, apples. A must for Christmas dinner.