Home » Dessert » How To Make Homemade Banana Pudding From Scratch

You’ve come to the right place to learn how to make homemade banana pudding. This recipe includes making the creamy vanilla pudding from scratch then serving it over Nilla wafers and fresh-cut bananas for the most delicious classic Southern dessert. 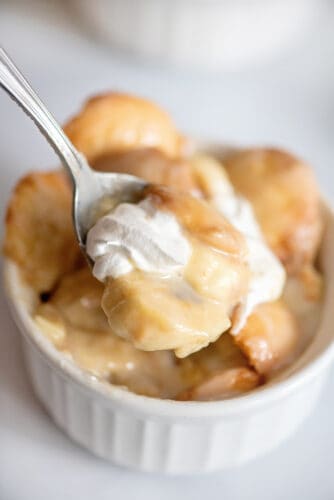 I love and adore old fashioned banana pudding – real Southern banana pudding. By real I mean the kind where you make the homemade pudding from scratch and pour it warm over a bowl of yummy Nilla wafers and fresh-cut bananas. That stuff with boxed pudding mix cannot even come close to how this tastes. If you think you’ve had banana pudding before and it involved an instant vanilla pudding mix… that was not banana pudding! This is banana pudding!

I think homemade pudding is such a classic and underrated dessert. This one, in particular, has it all. It features a sweet, rich, and creamy homemade vanilla pudding made from scratch, which is served on top of fresh banana slices and melt-in-your-mouth Nilla wafers. It’s the ultimate comfort food that I know your whole family will love.

Now, you have to be patient when making this homemade banana pudding recipe from scratch, but believe me when I say it’s worth the wait. 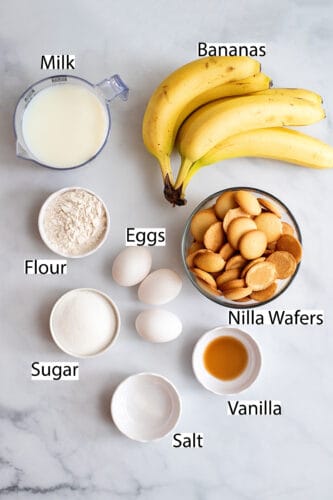 How to Make Homemade Banana Pudding From Scratch 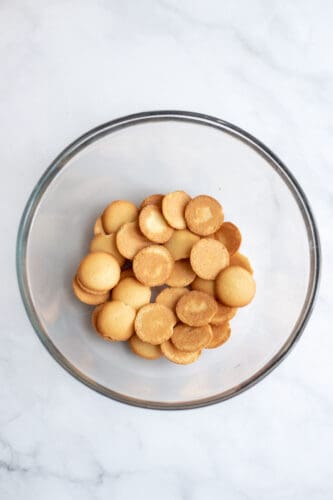 Put a layer of Nilla wafers in the bottom of a medium-sized mixing bowl. 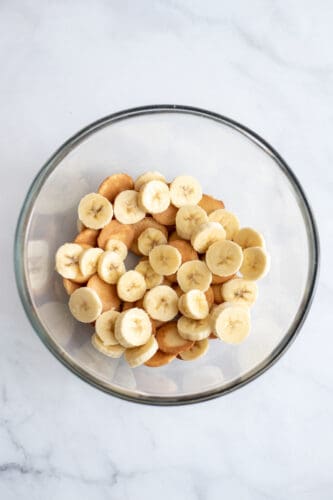 Slice a banana over the top. 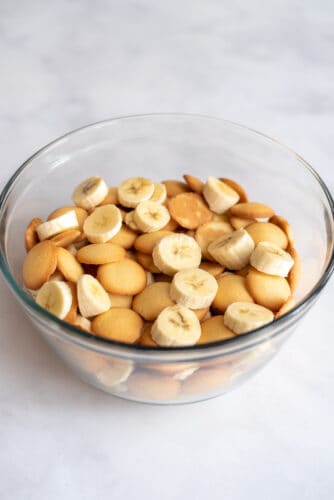 Repeat these layers until you’ve used up all your vanilla wafers and bananas. It really is important that you put Nilla wafers first, by the way. These are going to soak up all the yummy pudding that settles at the bottom of your bowl.

I use a mixing bowl because that is what my mother always used. She had a Pyrex Spring Blossom mixing bowl and it was enormous! She must have made at least two recipes of banana pudding each time she made it. Seeing that bowl on the counter was always a welcome sight! 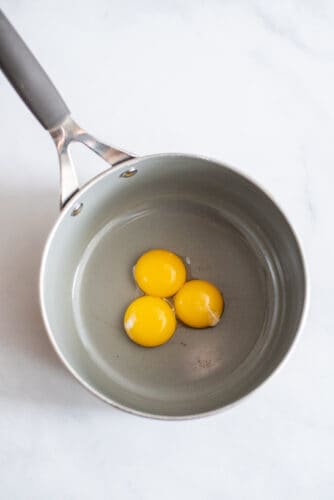 Crack your three eggs and separate the egg whites from the yolks.

Since we aren’t making a meringue, we won’t be using the whites. You can save them for another use or throw them away (which I did because I just care about my banana pudding right now). 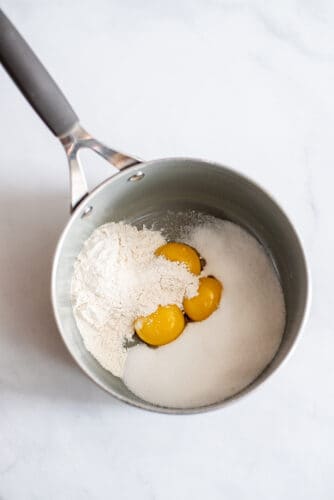 Place flour, sugar (or your favorite sweetener), and a dash of salt in a saucepan.

You can use a double broiler for this and not have to fret over it so much, but I just like living on the edge. Muhahaha! My trick for substituting Splenda for sugar in this is to always use just a wee bit less than the recipe calls for. If it calls for a cup of sugar, I might do a cup minus two tablespoons of  Swerve. To me, that keeps it from tasting artificial. 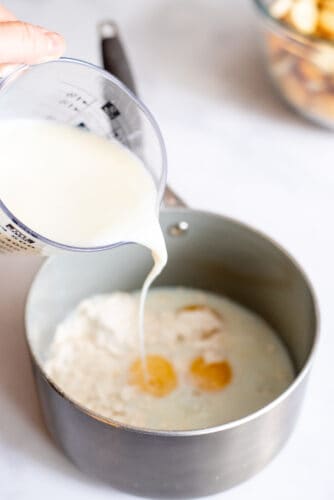 Add milk to the saucepan. 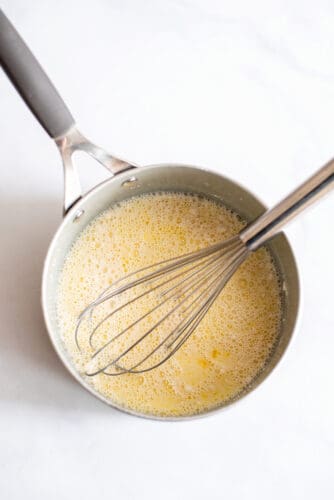 Put this milk mixture on the stovetop on medium-low heat and stir it really well with a whisk. You can also just use a spoon for this.

When you are done stirring it up it will look something like this.

Now settle in and BE PATIENT. You need to stir the pot constantly, scraping the bottom so none of it gets a chance to stick and scorch. This will take about 15 minutes, so I usually get something to read while I stand there and stir because I don’t think I’ve ever “just” done one thing for 15 minutes straight.

Seriously, be patient, keep stirring, don’t turn the heat up past four. This is going to take a long time and do nothing, but then ALL OF A SUDDEN it will be thicker. 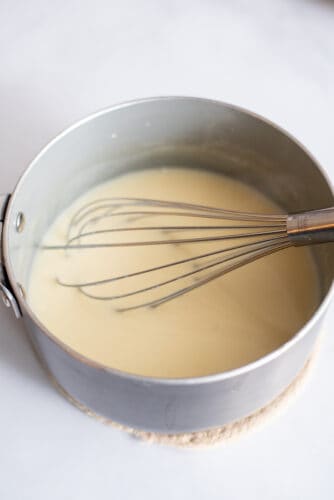 Now, your pudding isn’t going to get super thick, but after about 15 minutes of stirring, it will suddenly get thicker. The consistency will be about what that boxed pudding is right after you mix it before it sets well. TAKE IT OFF THE EYE! Quick! We don’t want it to scorch or keep getting thicker.

Now if you end up with a scorched pudding or lumpy pudding mixture, just use it anyway andpay attention to me when I tell you to slow down next time! 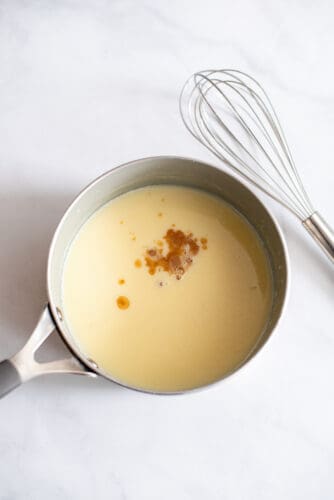 Add a 1/2 teaspoon of vanilla and stir. 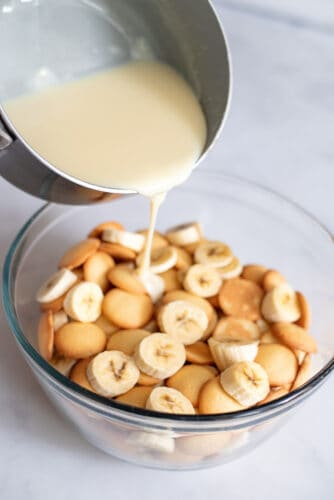 Immediately pour vanilla pudding over your sliced banana and wafers. 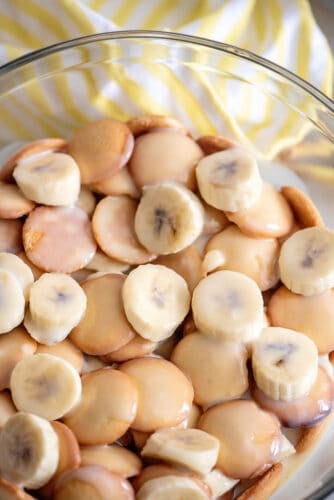 Let this sit for about five minutes so the pudding has time to soak into the wafers. 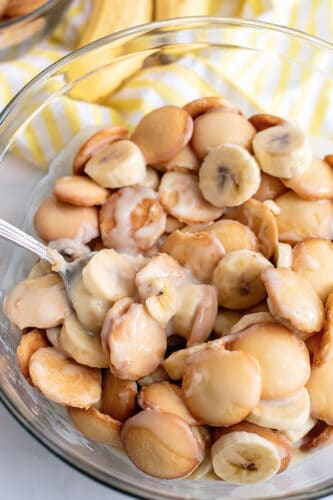 THIS IS SO GOOD! Eat it warm, then refrigerate leftovers. I prefer to eat the leftovers cold. YUM!

Store your leftovers in an airtight container in the fridge for up to four days. I don’t recommend freezing this homemade pudding, as the wafers will be too soggy. 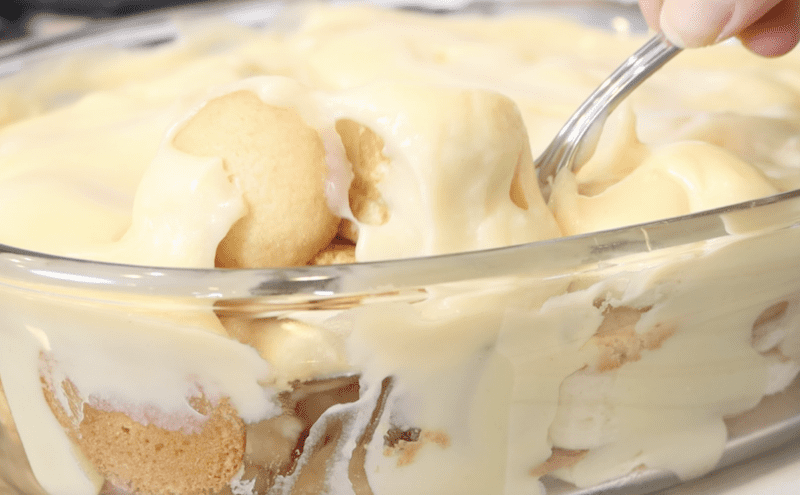 How do you keep bananas from turning brown in a banana pudding?

To keep bananas from turning brown, I recommend brushing the banana slices with lemon juice, which slows down any fruit browning process.

How do you serve pudding?

If it’s for a dinner party, you can opt to serve your puddings in individual parfait cups with crushed wafers on top.

Can I make this pudding ahead of time?

Absolutely! This banana pudding recipe lasts four days covered in the fridge and it tastes great cold, so you could definitely make it the night before and let the pudding soak into the wafers overnight.

Is one banana dessert not enough? Check out these other delicious banana recipes: 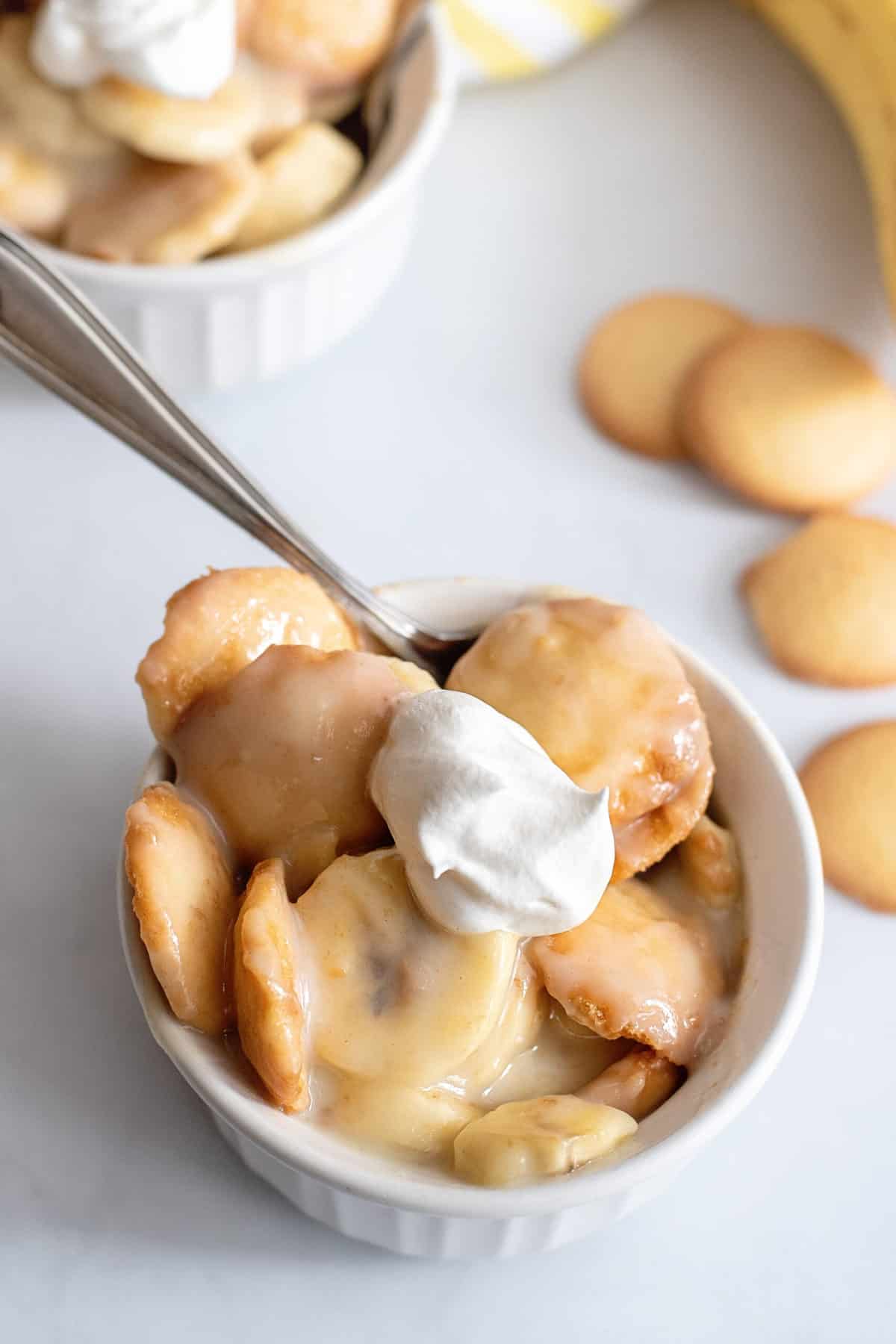 This may be my favorite dessert in the whole world! My Mom made a similar recipe like this for as long as she lived and although my recipe is to die for, mine is still not as good as hers!! As she was in the early stages of Alzheimer, she lived with us and we made it many times together. It helped her to do things that were the norm for her so we cooked everything together. Mom and I cooked stewed okra, cabbage with bacon, collards with side meat, wilted lettuce, chow chow!!!! I could go on but most southerners can relate. Love this site and please keep on bringing back these wonderful recipes! Sorry for this long post but have to add .. I made a huge bowl of Mom’s recipe which is about 6 times this one with fresh sliced strawberries marinated in fruit fresh and sugar to take to a work potluck. It was the first dessert gone and I thought that one guy was going to lick the bowl!!!

Be careful! Vanilla error I normally print the recipe out and adjust my ingredients on paper when doubling then use that to cook with because I didn’t grow up cooking like this and print cartridges don’t like me so I used my iPad instead.
This morning I tripled the recipe for a big get together this afternoon and was already at the stove stirring and stirring and stirring and wondering when I was going to spring your incredible grandma’s coconut cream pie on this group of childhood friends and wondering if this was ever going to start thickening then I realized I hadn’t pre measured my vanilla like I had all the other ingredients. No biggie, I looked in narrative and found “add one teaspoon vanilla” and had my sister get it ready for me. 3 teaspoons because I tripled the batch right? I was in a hurry and didn’t even do a taste test because I’ve made this many times before and it’s always a huge hit. This evening I was dishing up the last bit in a to go container for a young man’s lunch tomorrow and licked the spoon when I was finished. Wow vanilla-y.
The ingredients list calls for half teaspoon vanilla but narrative direction calls for a teaspoon.
Don’t get me wrong, I’ve made this banana pudding recipe many times and get rave reviews. Especially the older generation that appreciate a good homemade anything.
My Momma’s side of the family has a rule that you must have cookie and banana in every bite for banana pudding to be just right.
The triple batch vanilla banana pudding was still a big hit and I came home with a huge empty Pyrex bowl so all is well.
My group has decided that I must redeem myself and make this again with the correct amount of vanilla so they can get the full affect of this delicious old fashioned treat. Plus a request for birthday banana pudding in November.
I love your recipes, they are truly southern, and remind me of my childhood when we didn’t have instant anything lol
They’re so easy to follow plus there’s always a few laughs in the narrative. In years past, I’ve had 2 marriage proposals over the grandma’s coconut cream pie plus they always bring minimum $50-$100 at fundraisers. I declined the marriage proposals and gave the wives the name of your website lol

Thanks for finding the discrepancy in the narrative. All fixed up now. I am glad your group liked it anyway and am hoping they will love the next batch too 🙂

i triple mine as well, I have a big family. I have to make a small bowl on the side of cookie puddin since 2 of mine have textural issues with the bananas, they just weird them out for some reason. My “grandmother-in-law” is from Korea and she gets her a few helpings of banana pudding every time! But she brings home made mondu dumplings as well and I would just about rassle somebody over them.

This yummy banana pudding definitely looks like a winner! I am going to try it out tomorrow, and I may even fold some mashed bananas into the pudding to give it extra banana flavor. I don’t think there will be any leftovers!

My husbands love banana pudding going to make it tonight

Anything Banana and I’m all in! This looks like a winner! I will be giving this recipe a try! Thanks for sharing!