Christmas morning came pretty early for me this year when Brady came into my bedroom at 4:00 AM to ask if we could get up and open presents. I turned over to find Katy Rose had made her way into our bed during the night and my husband was diligently sawing lumber on the other side of where she slept in between us. I talked to Brady in hushed tones and sent him back to this room, only to have him return several more times to see if I was ready to wake everyone up over the next hour.

Around 5:00 AM I told him I was going to start taking one present away each time he came in my room to ask if we were getting up and that put him off until 6:00 when I felt it would be cruel to make them wait any longer. Now some of you will think I’m horrible for telling him that but with all of the big people in the house having stayed up late watching for signs of Santa’s sleigh, we needed that extra hour of sleep.

As I got out of bed, for some reason I felt compelled to glance out the window. Lifting the slats to the blinds I gasped at what I saw. “Ricky…you’re not going to believe this. It snowed!”. He was up in a flash as we both pressed our noses to the glass and looked out over the miracle of a blanket of white in our yard. I hurried to tell Brady and then set about making coffee as I called Mama, thrilled to discover she was just as much in awe as I was..

“Mama, have you ever had a white Christmas?”

“Not that I ever remember in my lifetime”

I told her that I thought it was a gift. So many families are having a lean Christmas this year in terms of what was under the tree but imagine the joy of those children at waking to our very own winter wonderland to go along with it. In a place where snow is seldom seen and usually disappears within hours if it does make an appearance, the prospect of snowmen and snow angels is often just the stuff of dreams for children in our neck of the woods.

Mama said she thought the snow came as a sign of hope and joy in the year ahead.

Both of us agreed that it wasn’t a random act of nature but a true Christmas miracle.

We got Granny and Mr Pop up and all congregated in the living room where the kids stared in wonder at the snow out the window for a  few moments before tearing into their gifts. I held my breath with each gift, waiting to see a light of joy in their eyes as it was revealed and finally breathed easy once they sat down amid their bounty and began the exclamations of how this was the best Christmas ever.

Once they were done they each took turns handing gifts out to the adults as we each had one or two beneath the tree. Katy Rose was thrilled to be able to read the name tags this year for the first time and Bradybug just loves getting to be the one handing out presents, he has a very giving spirit.

I got the hair dryer I had been hoping for, one so powerful it will just about blow the hair right off your head, and also a large nonstick skillet that I really needed and was surprised that my husband actually thought of (thank you Jyl, I know you had a hand in that!). I surprised him with a few things and it just so happens that one of them is something he’s always wanted, although inexpensive, something he hadn’t thought to buy for himself.

We quickly chimed in with the kids, glancing out the window at the snow and then back to the happy faces around us, that this was truly one of the best Christmases ever.

At that moment though, my kids seemed to think it had something to do with their gifts. Of course, I knew what they will realize later on in life, that this Christmas being special had little to do with those five minutes of paper tearing frenzy.

Years down the road, I’m pretty sure they won’t remember the video games or barbies or even that new fangled play doh set, but they’ll remember decorating cookies Christmas eve with their whole family around the dinner table, trying to make the world’s longest paper chain, their grandparents here on Christmas morning, and the miracle of a white Christmas in Alabama. 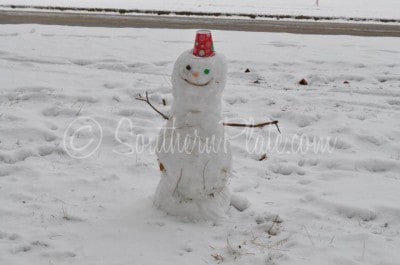 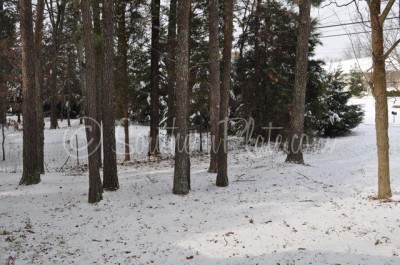 We also had a white Christmas in Eastern Kentucky — our first in 12 years. I went outside at 5 a.m. on Christmas morning with my little dog and I heard neighborhood children playing in the snow. I guessed that they had stayed up all night on Christmas Eve. What a wonderful memory for them!

I SO loved your Christmas miracle story, just read it right now! I hope that your Mom’s prediction is right, that it’s a sign of better things to come! Sounds like you had a Merry Christmas. I wish you and your family a Happy New Year, Christy!

I hope that yall have a Happy New Year too Denise!!

Christy,
I just got to read about your Christmas morning and loved your description of the wished-for blowdryer (want to share what kind it is? I’d love to have one that ‘nearly blows the hair off my head’!). Had the BEST laugh, or as much as I was able to with my voice nearly gone with this crud stuff going around!

Just had to tell you, too, while I’m writing, that your pecan pie recipe is forevermore the VERY best one! I sent that pie to work with my husband and one of his co-workers ate some of it before the Christmas holidays. He told my husband later that he was eating a piece of somebody’s pie at Christmas and sure was wishing for a piece of the one made with your recipe! Terry was even telling him how you put it in a cold oven, etc., to bake it. 😀 He’s got to buy his wife a copy of your cookbook!!

Glad that miracles still do happen. I am 46 and only remember a dusting of snow here in Hunsville and got to spend Christmas with my Dad after not being in contact for 17 years. Faith is the greatest gift me can have a share and so happy to be able to follow along your ride too Christy… hoping for even a more prosperous New Year for you and yours.

My family and I recently lived in Alabama for a short time. My husbands job moved us to New England. By the way I loved Alabama:). I have a very special friend I met while living there. She is quit the southern-bell herself!:). This Christmas she gave my husband and I your cookbook. I have already tried the biscuits. Quit tasty! Looking forward to trying more!

My family and I settled in Alabama for a short time. Loved it there by the way! My husbands job moved us on. I have a very dear friend I met while we lived in Alabama and she gave my husband and I your cookbook for Christmas. Can not wait to try some of this yummy looking southern food!

I hope you enjoy it Beth!

Christy, I thought the snow was a great gift, too. It sure added to our Christmas Day excitement here in east TN. When my grandchildren came the first thing one of my granddaughters said was, “it’s a Christmas miracle!”
We had breakfast, opened gifts, and they couldn’t wait to get back outside. When they came back in after playing a long time in the snow my other granddaughter said, “This is the best day ever!” I will never forget that.
I watched you on the Today show online today–you did great and I loved your hairdo!