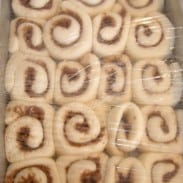 These cinnamon rolls have power behind them – real power. You could pretty much get anything you wanted if you showed up toting a plate of these babies, warm with icing oozing down the side. Regardless of their power, though, I want you to try to use them only for good. Rather than taking over the world (which I am waiting ’til I get both kids in school to do because I just don’t have the time needed to run it until I have at least another hour free each day), you can use them as wonderful gifts of gratitude and tokens of caring. I especially love that I can make these ahead of time and put them in the fridge to pop in the oven first thing in the morning – which makes your gifts of gratitude and tokens of caring all the more easier to provide! 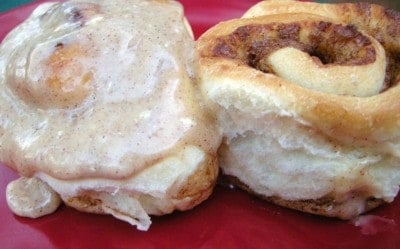 shortcut method. While it’s fun to make the dough from scratch, its much more time consuming and not that easy on your hands (especially if you have arthritis ~raises hand~). Using store bought bread dough as opposed to making your own makes these super easy for anyone, regardless of experience in the kitchen, to turn out these supremely impressive cinnamon rolls.

If you have a loved one who is a devotee of the cinnamon rolls in the mall, expect them to become your number one fan the moment these come out of the oven.

In fact, my husband prefers them!

Of course, since I do have two ways of making these, I’m going to give you my easy way and then my homemade dough recipe at the bottom of the post just in case any of you want to try out that method as well. The tutorial will focus on the easy way, though. Life is complicated enough. 🙂 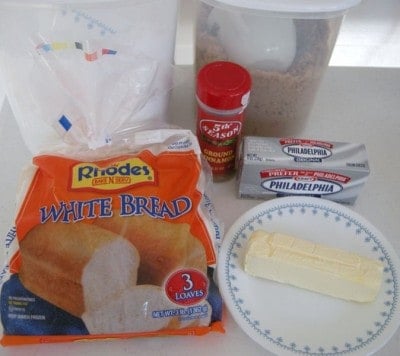 *Note: I’m using super cheap cinnamon. I paid all of .50 cents for it. You can pay a small fortune for a jar of cinnamon these days but I guess my tastes have never been refined enough to tell the difference.~grins~

Now, my confectioner’s sugar and brown sugar are in little sealed containers. I got tired of dealing with bags and such so I picked those up on my last trip to the grocery store. For those of you who know me and fear I may be ill – because this seems almost organized and that is soooooooooooo unlike me- rest assured this is a random act of organization and I don’t plan on making a habit of it. ~exhales in relief~ Yeah, that kinda scared me for a minute there, too!

I will always remain true to myself. You have my solemn vow that there will always be several piles of unfolded laundry, a pantry that looks like a tornado hit it most days, and empty coffee cups sitting near my computer along with various other assorted messes not just in one room, but throughout my entire house.

Don’t worry folks, I won’t let ya down! 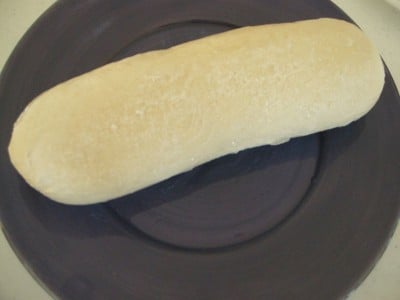 Get out one loaf of bread dough and sit it on a plate at room temperature to thaw. This will probably take about an hour.

Just go check on it every now and then and poke it a bit to see if it is still frozen in the center. We need it completely thawed because we’re gonna take our rolling pin and put some elbow grease into flattening and stretching that puppy out! 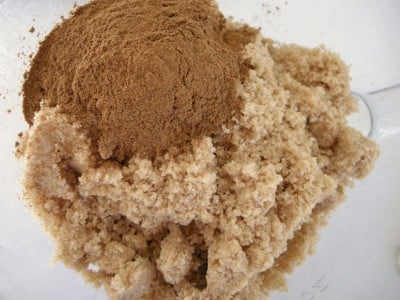 In a small bowl, place brown sugar and cinnamon. 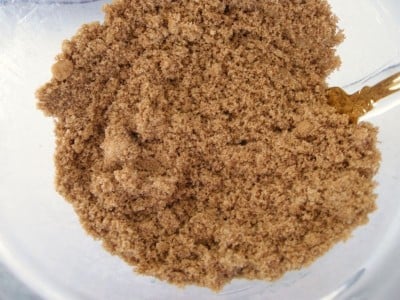 I used one of Katy Rose’s “golden forks” for this. She was pretty proud of that. 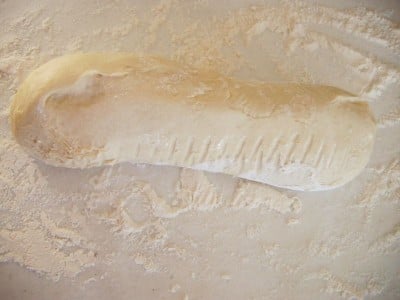 I always roll out a bit of waxed paper to do this on for easy clean up.

I think more sentences in my life should include the words “Easy” and “clean up” together. Especially this time of year. 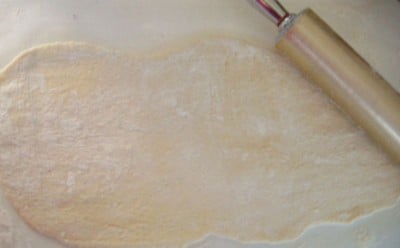 Now, putting some elbow grease into this, roll out your dough.

My original recipe called for it to be rolled out to about 16×21 but that was when I was making the dough from scratch. When I use a loaf of dough, I roll it out to about 9×16. It comes out just the same but you just don’t have as many spirals to your cinnamon rolls. 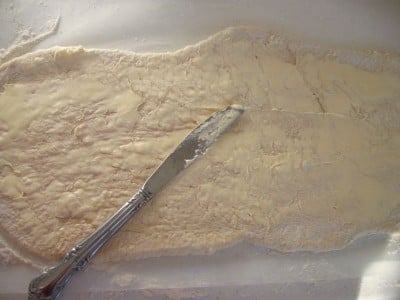 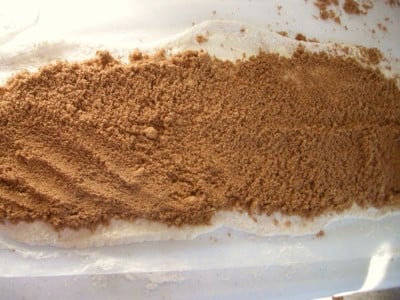 Sprinkle your brown sugar mixture over it and pat down lightly. I leave a little bit of edge on each side to help it seal when we roll it up. 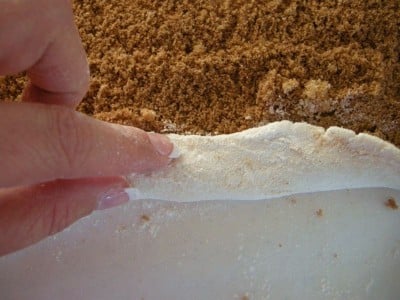 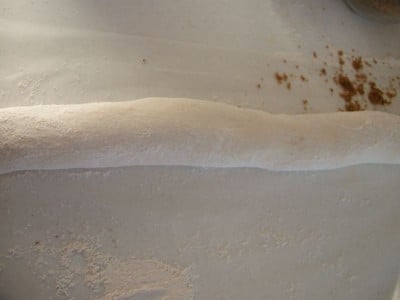 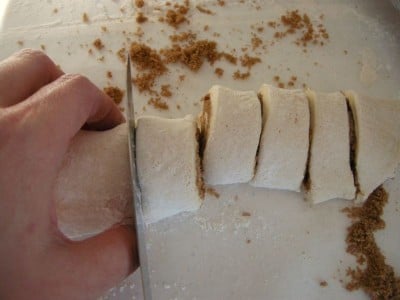 Using a serrated knife (because that is what works best for me, but if you prefer some other type feel free!) cut one inch slices all down your log. 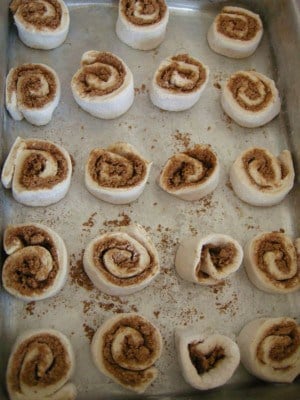 I am using metal but you can use glass if you prefer, whatever you have on hand.

You really can’t mess these up. 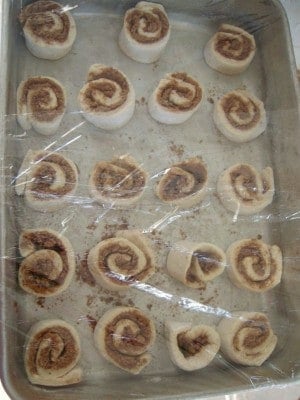 Cover with cling wrap and place in a warm place to rise until doubled in size, which could take anywhere from two to four hours, depending on the temperature. Sometimes it’s hard to find a warm place in your house in the winter time. In the summer, I go put them in the garage. In the winter, I dry a load of clothes and set them on top of the washing machine, near the dryer. ~grins~ At this point, you can also put them in the refrigerator and let them rise overnight. They will rise much more slowly in the fridge so get up about an hour before you want to bake them because you may need to sit them on the counter for about an hour to let them finish rising. 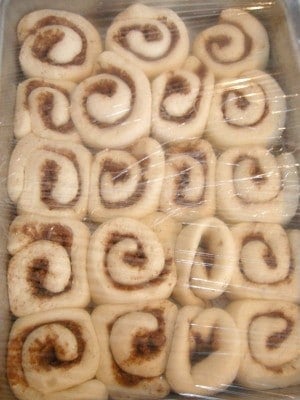 Hint: Don’t be going bragging about how easy it is to your family because if they don’t know, you’re pretty much a sure thing for a sainthood nomination when you make these. Remove cling wrap and bake at 400 for 15 minutes, or until lightly browned. 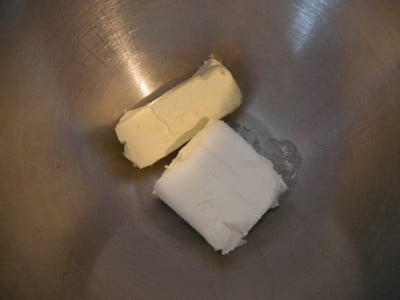 Meanwhile, back at the Duke place, Boss Hog developed a wild hankerin’ for some cream cheese icing. Being bighearted, Daisy decided to make it for him. I watched way too much Dukes of Hazzard as a child… 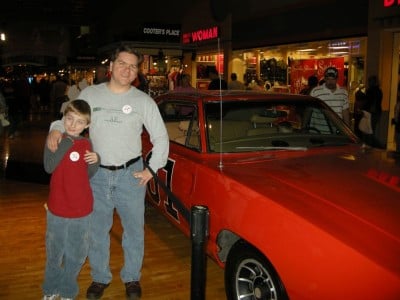 Apparently, Ricky did too because when he saw the General Lee at a mall in Nashville this past weekend he about had a dying duck fit wanting me to take his picture by it. Where was I? Oh ..yeah…Boss Hog wanted some cream cheese icing..

Place 1/2 brick cream cheese (recipe calls for 3 ounces, half of an eight ounce brick works for me!) and the other half of the stick of  margarine in a mixing bowl. 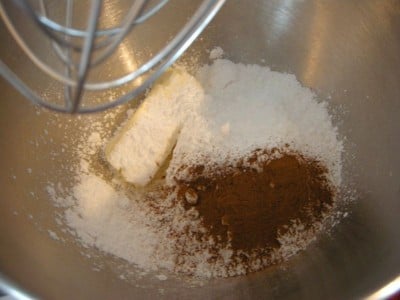 Add confectioner’s sugar and cinnamon. The cinnamon gives your icing a bit of oomph! 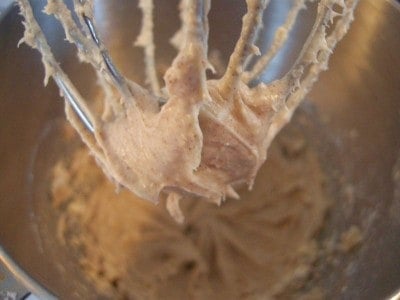 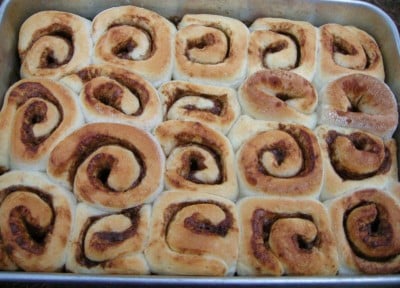 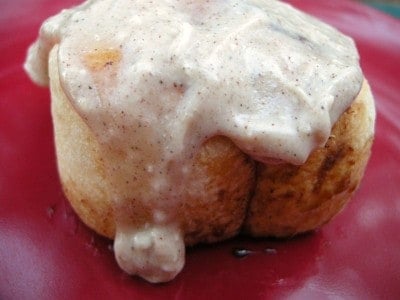 Now I don’t put icing on mine in the pan, I serve them and let people put their own icing on. I eat mine without any icing (I know, that is awful! But I can’t have the sugar and I still very much enjoy the cinnamon roll!) and my husband would pretty much put the entire bowl of icing on his if I let him…

Ooooh Lawdy, isn’t that gorgeous? These heat up well, too. I made them last night for dessert and we heated some for breakfast this morning. Delicious!

*This dough replaces the frozen loaf of bread dough. Use the rest of the recipe as written above.

Place all of the dough ingredients into the pan of your bread machine in the order listed. Program the machine for dough or manual and press start. After about ten minutes, check the doughs consistency. It should be smooth, not too sticky and not too dry. Adjust it’s consistency with additional flour or water if necessary to allow the machine to complete the kneading.

*If not using a bread machine, combine all of the dough ingredients in a large mixing bowl and stir until mixture becomes cohesive. Transfer to lightly oiled work surface and knead by hand for five to eight minutes or until it is smooth. The way I think of smooth is…~looks around to make sure no one is listening~ it needs to be like a baby’s bottom.

Place kneaded dough in a lightly oiled bowl, turn to grease all sides. Cover the bowl with plastic wrap and let rise in warm place for one hour, until it is nearly doubled. Transfer to floured work surface and roll into a 16×21 inch rectangle. Spread with 1/2 stick margarine and sprinkle with cinnamon/sugar mixture. Complete using recipe above.

Submitted by Elaine. Please add to our collection by clicking here. Don’t worry if your quote is already listed, it could probably bear repeating!