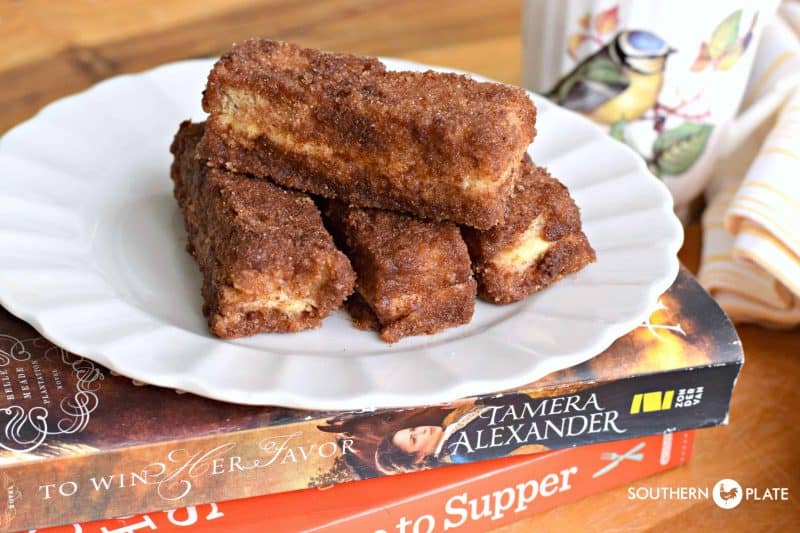 Today I’m bringing you another great freezer recipe that you can make ahead of time and pop in the oven on a busy morning for breakfast or for a quick bite-sized dessert after supper. This stuffed cinnamon toast sticks recipe is everything that’s good in cinnamon toast with a cream cheese filling. Once they’re waiting in your freezer, the only thing left is to put them on a pan and bake for a few minutes in the oven. Convenience food from your own kitchen anytime the need arises! I like that.

The ingredients are super simple too: bread, butter, egg, cream cheese, vanilla extract, sugar, and ground cinnamon. To make stuffed cinnamon sticks, all you need to do is mix together the cream cheese mixture, spread this onto each bread slice, cut them into sticks, and dip them in cinnamon sugar. Then you’re either going to freeze them or bake them for a few minutes. These bite-sized cinnamon toast treats are just bursting with flavor and texture and let me tell you, it’s hard to stop at just one.

If you like this recipe, you must make my overnight stuffed french toast recipe next! 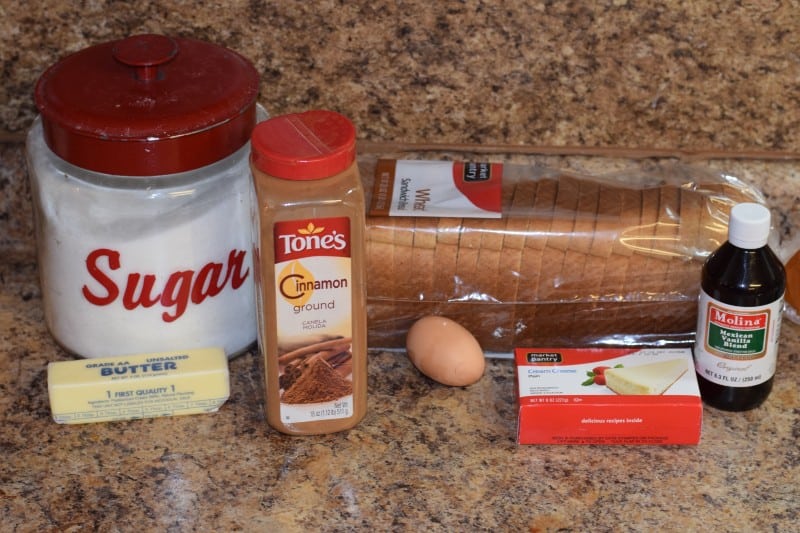 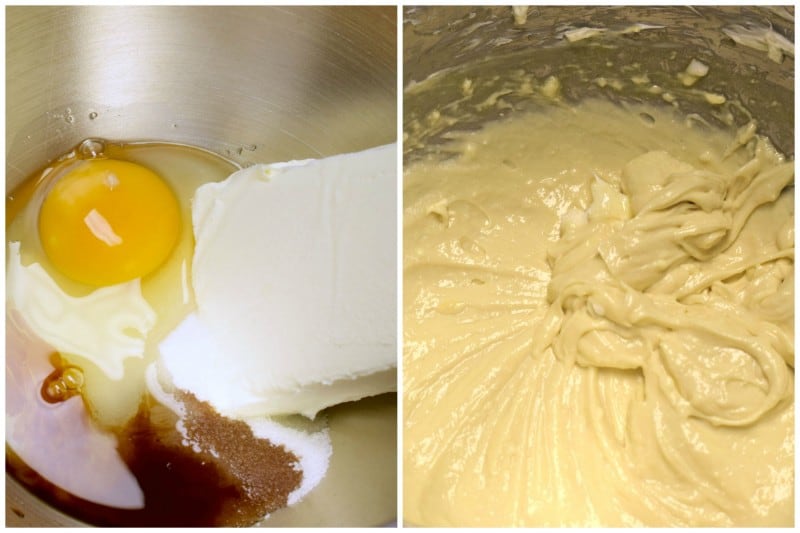 Place softened cream cheese, egg, sugar, and vanilla in a medium bowl. Beat with an electric mixer until smooth and creamy. 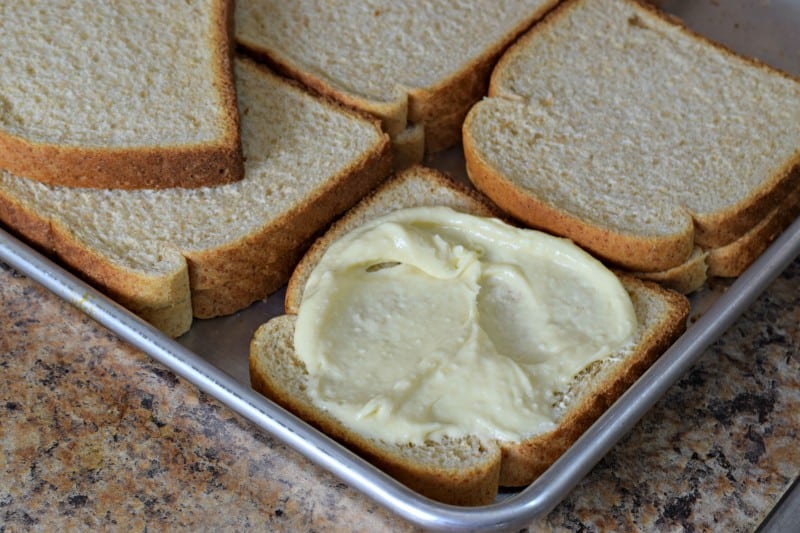 So what I do is lay out all of my bread on a baking sheet in twos. Then, I go and spread the filling in between each set of slices like this. 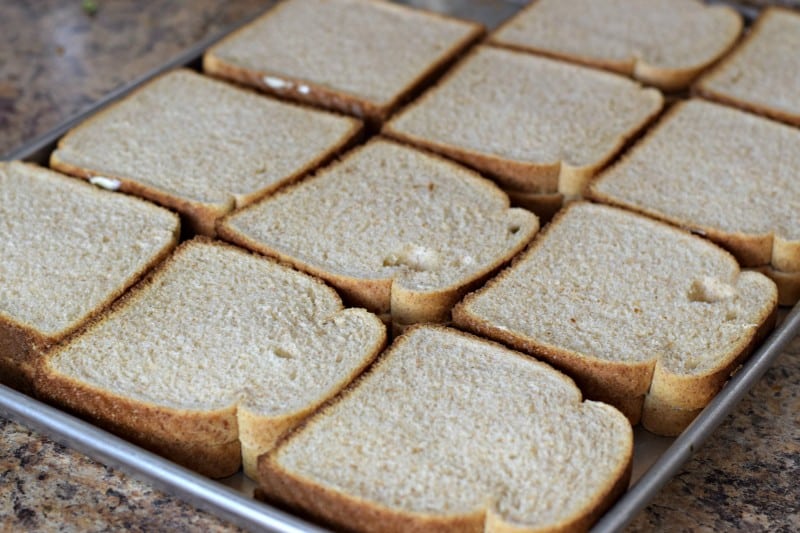 Once you make all of the little cream cheese-filled sandwiches, I place this pan in the freezer for about 10 minutes.

What this does is help toughen up the bread just ever so slightly so that it doesn’t smoosh when we cut it into fingers. 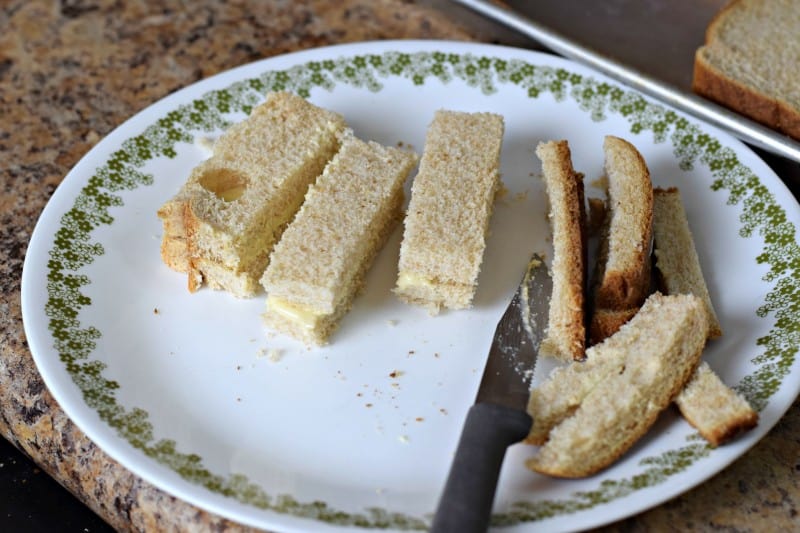 After that, I cut the crusts off and cut each sandwich into three sticks. 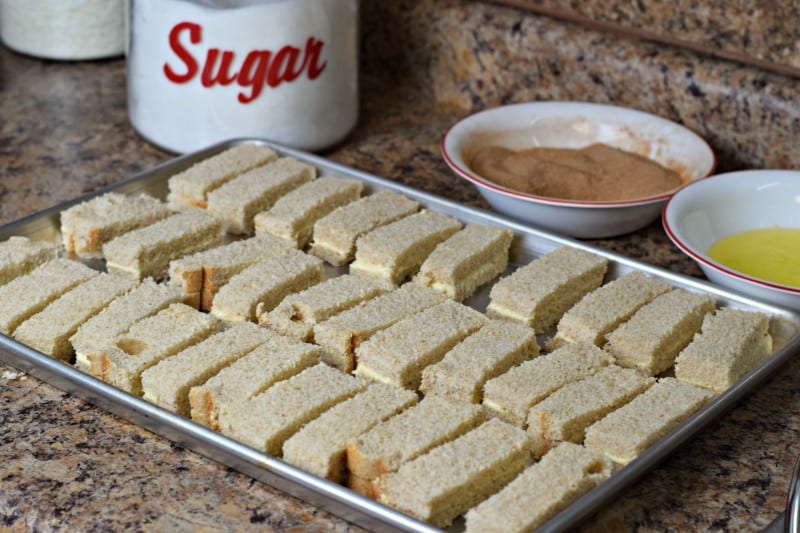 I place those back on that same baking sheet and freeze these (uncovered) for about 20 to 30 minutes. 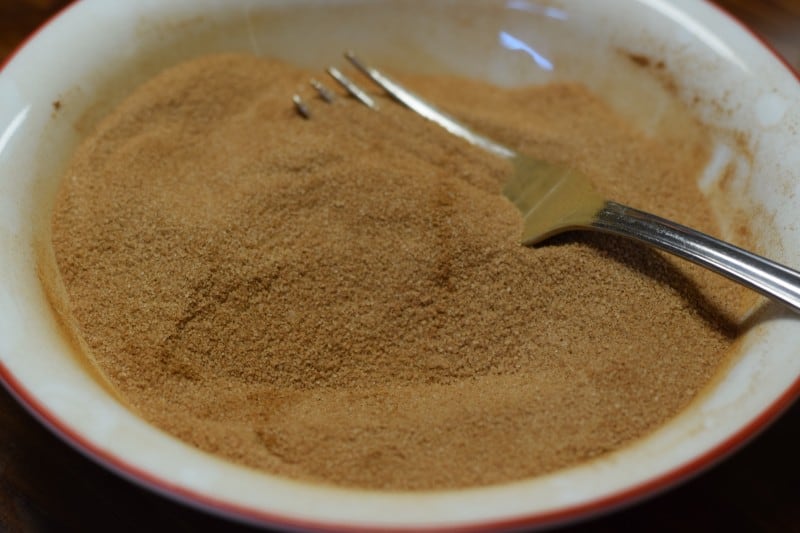 During this time, melt your butter so it has time to cool down a bit before we have to use it.

Also, stir your cinnamon and sugar together in a small bowl.

Note: You will most likely need to melt more butter and stir more cinnamon and sugar together halfway through. I always have to and those will be the measurements given in the recipe. However, I coat my sticks on all sides. If you just coat the top and bottom your butter and cinnamon mixture will go further and your stuffed cinnamon sticks won’t be as sweet. 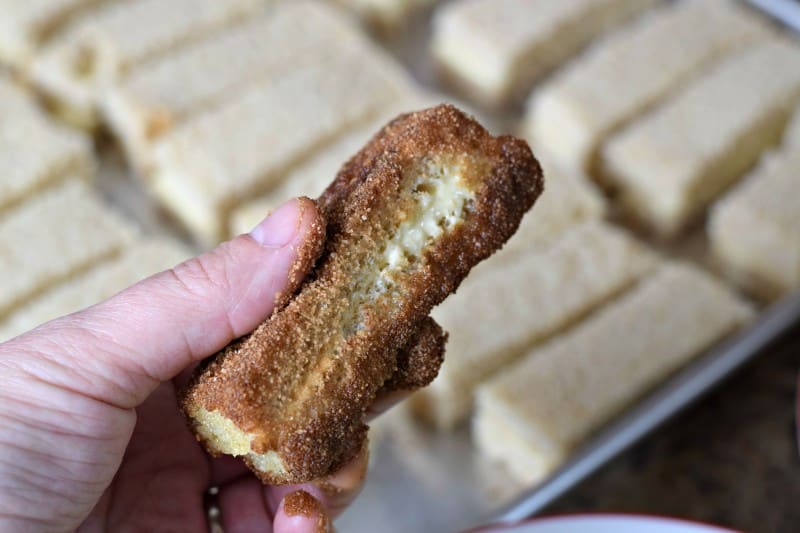 Now dip each stick into the melted butter and then the cinnamon sugar. 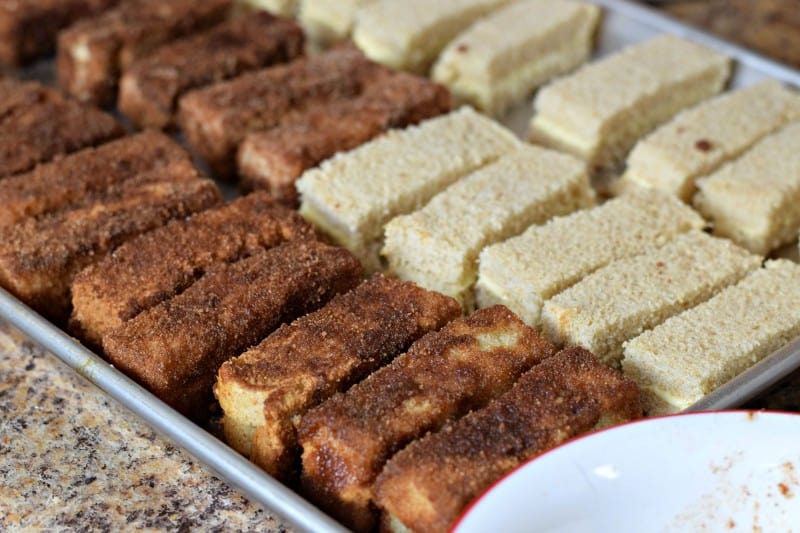 Repeat until you coat all sticks.

To bake, place the frozen sticks on a baking sheet and bake at 400 for 8 to 10 minutes. Half this time if cooking in the air fryer.

Follow the freezing and baking directions above, but the stuffed cinnamon toast sticks will last in the freezer for up to 3 months.

How do you serve stuffed cinnamon toast sticks?

While these taste great as is, you can also serve your stuffed cinnamon toast with whipped cream, maple syrup, fresh strawberries (or any fresh berries really), banana slices, or chopped walnuts.

What bread should I use for stuffed cinnamon toast sticks?

You can use any kind of bread you like, including Texas toast, brioche bread, challah bread, or whole wheat bread. If you can’t get enough cinnamon flavor, why not use cinnamon swirl bread? 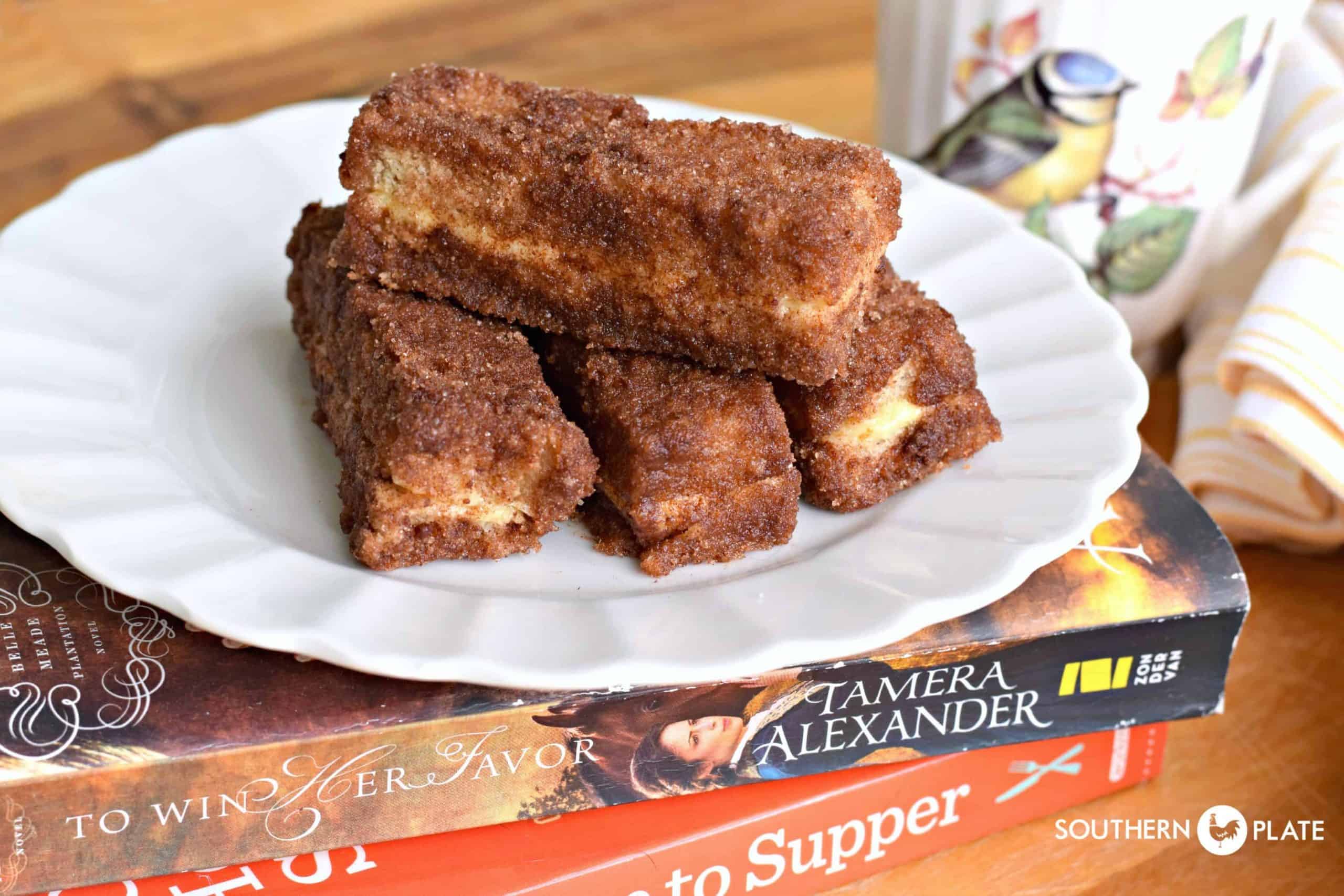 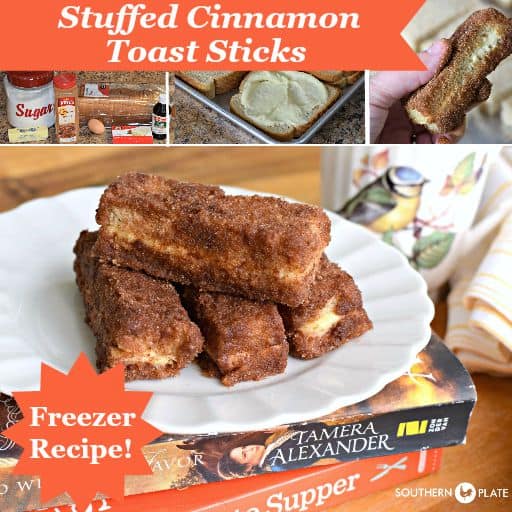 “Success is the ability to go from one failure to another without loss of enthusiasm.” ~Winston Churchill

Looks so delicious! And even better that it’s baked and not deep fried

This story is why I almost always click on to your email. I came for the recipes but I do so enjoy the stories.

God bless you and thank you so much for saying that 🙂 This is a wonderful confirmation.

Why do you cut off the crust?

Mainly cause I wanted to 🙂 You can leave them if you like.

These would be so good to have on hand when you have over night guests.

Now, I so enjoyed your account of your gift , Brayden.. He not only is very intelligent but couple that with his compassion for others and he will contribute great things to his world.
There are no doubts in my mind that you and his father are great parents.

Great idea Linda!!! They would be so easy for a quick breakfast for comapany!! Thank you so much, he has made parenting a joy for us!