Home » I will never forget

This post seems trivial and meaningless as I read over it. I wasn’t in New York on Sept. 11 and I don’t directly know anyone who passed away on that day, but I wanted to share my heart a bit with you today and I’d like you to share your heart with me in the comments. Where were you? Where were your children? Do you think it is possible to ever forget that day in our history after having lived through it? I wasn’t affected directly, but like so many, I was forever changed.

We had been listening to a cassette tape of Bear In The Big Blue House. It had a song on it that Brady and I listened to each morning on the way to take him to my mother’s house so I could get to class. Ricky worked in Huntsville so he went one way and I headed the other, for my hour and a half commute to Florence, Alabama four days a week. Fortunately, Mama’s was a good halfway point so my two year old didn’t have to sit in the car nearly as long.

As the last strains of our song played, I hit eject to listen to the radio a bit in the last ten minutes or so until we got to Mama’s house. I turned it up when they were talking about the plane and listened intently, taking a minute or two to catch up on the details and figure out why everyone sounded so strained.

My first thought was disbelief. It just had to be one of those War of the World things. I felt anger rolling inside me at what I thought must be a sick joke, but they dj’s continued, so I called Mama. “Can you turn on the tv? They’re saying an airplane flew into the world trade center.” Mama asked “Huh? I haven’t heard anything about that. When? ” As she was turning the channels, I was slightly relieved, thinking if she didn’t know about it then it was most likely a joke. She found it a moment later and sat down to gather all of the details as we both sat silently on the phone together. “Oh Christy, I see it. It’s awful.”

“Are you serious? So it’s really real?” We had a minute or two to discuss what could have possibly caused it, our first thought went to it being some freakish radar glitch that caused the pilots to miscalculate…and then Mama said “Oh God, another one just went in!”

I was at her house a minute or two later with Brady and we both sat down in front of the tv while he toddled over to a familiar bucket of toys in her living room. It wasn’t long before we realized the sinister truth of the plane crashes as other events began to unfold.

I called my professor and said “What am I supposed to do? Do I come to class? Are they closing the university?” It was silly to worry about missing class but I was still in shock. She told me to be wherever I needed to be, so I told her I needed to be with Brady and spent the day at my mother’s house watching the horror unfold, each of us taking breaks to play with Brady, fix his lunch, and spend a few minutes pretending everything was alright for the two year old who had no idea everything wasn’t.

That night I finally drove home with Brady and put him to bed but there was no way I could sleep. Ricky had been watching all day at his work and he and I sat down together, going over the news and wondering what would happen next. Watching the people jump off again and again in replayed footage. The pain of an entire country seemed to hang in the air and we found ourselves unable to sleep, like so many of the rest of the world.

Instead, I spent a few hours writing a letter to my son. I needed him to know what happened, how it felt at that moment, what it was really like. I wanted him to understand in a way that a kid looking back and reading about it in a history book just wouldn’t. I wrote him for over an hour, ending up with a 30+ page letter describing just where he was and what was going through his mother’s mind when the planes hit. I tried to explain the pain, the fear, the tragedy and the loss. I explained what it was like seeing those people jump. I explained what it was like seeing the people doing all they could to rescue others. I described the firefighters, the policeman, the people in the street, how they all turned into heroes that day. I did the best I could to give him an account of what that day in his life was like through the eyes of his mother. How we all held our breath and waited to see where the next attack would take place. How I looked outside and wondered where I could possibly run with my beautiful little baby to keep him safe.

When I’d ran out of words and realized that some emotions just couldn’t be expressed- I sealed that letter, wrote his name on the front, and dated it 9-11-2029, deciding that he needed to be close to the age I was when I wrote it before my words would be able to carry the weight I needed them to. I couldn’t help but hope that by the time he did read it, our world would be so very different from that day that the violence and horror would seem foreign to him outside of my letter.

A few weeks later we took Brady to the Nashville Zoo. As we were walking around we heard a plane fly over and Ricky and I both froze in place and looked at each other while we held our breath and scanned the horizon. I’ll never forget that feeling in the pit of my stomach as I clutched Brady’s tiny hand and said a silent prayer until the sound of the plane engine dissipated. Even now, whenever I hear a plane fly over the house in the quiet hours of evening I hold my breath. I know many of you do the same.

We made a lot of promises ten years ago, one of the key ones being that we would never forget but if you were alive ten years ago. I can’t imagine we could ever possibly forget exactly where we were and what that day was like.

In honor of all who lost their lives on September 11th, God Bless America. 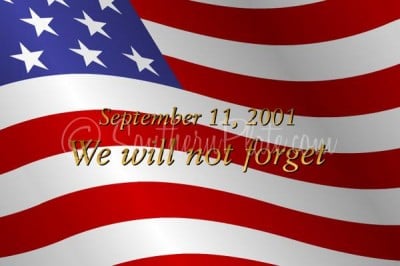 I was on my way to work at a local church to teach preschool. I had just dropped by sons off at their elementary school. I was listening to Rick and Bubba on the radio when one of them said we are getting reports from New York that a plane has crashed into the World Trade center. I of course am thinking it had to be a small plane. Then I hear one of them say there is another plane and then the words I will never forget Bubba said folks America is under attack. We took turns at work that day watching the reports from New York. I remember when I picked my sons up from school that afternoon giving them hugs. I cried when I saw the footage of the towers coming down. I cried when I put my sons to bed that night knowing there were children who would never have their mom or dad get to do that simple ritual. It is a day I will never forget. I still cry. Today at the school I work at our principal said the announcements. He spent five minutes talking to the students about that day. None of them were born but he knew the importance of letting those students know the reason why we have to remember that day and to never forget. We are truly blessed to live in this country. I pray we will never forget that day that changed out lives forever.