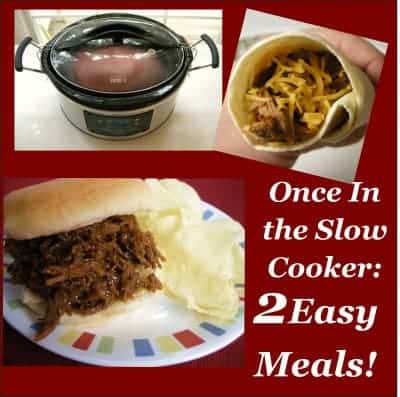 A member of our Southern Plate Family asked me if I’d put more slow cooker meals on the website with fall coming up. When she posted this on the Southern Plate Family Facebook Page, my wheels started spinning. Who doesn’t love being able to put a meal on the table with a slow cooker?  With our Fall schedules in full swing this is the ultimate time saving way to eat well while saving both money and effort.

When we were teenagers, Mama started working outside the home and began relying on our slow cooker on a regular basis. She still managed to put hearty, kid pleasing meals on the table despite spending a fraction of the time at home. This was one of our standbys and its one of my very favorite “convenience” meals because there is virtually no work to be done to get it on the table once you shred your roast!

As with most slow cooker recipes, this one is versatile. Use a beef roast or pork roast, plain water or beef broth, it’ll still turn out great. You also have plenty of room to customize for your own tastes and still end up with two hearty meals and time on your hands. 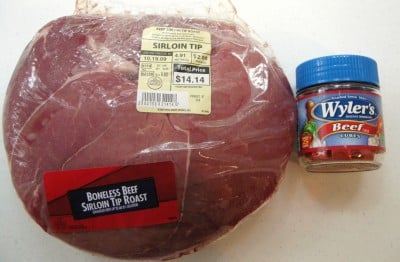 To get started, you’ll need a roast. Any old roast will do, be it beef or pork.

I was “down in my back” as folks say and unable to go to the grocery store myself so I had my husband make this meal and do this tutorial. He’s in trouble now because he’s proven he can cook. Fortunately, I am the only one who enjoys cooking so he can stick to building space stations and I’ll stick to browning the beef.

I had my husband go to the grocery store and email me pictures of roasts so I could pick out the one I want. Wee bit obsessive? Of course I am! But I don’t just toss out $14 on meat randomly so I wanted to make sure it was a good one.

Normally I look for a good bit of marbling in my roast in order to ensure a good tender outcome but I wanted more lean meat for this so we got one with minimum marbling.

I am using a few beef bouillon cubes in the water for a little more flavor. You can use beef broth as well or just plain water, whatever you prefer. 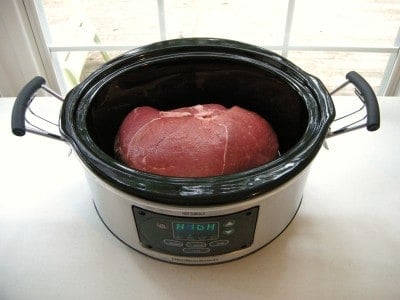 Place your roast in the slow cooker.

This is an awesome new slow cooker I have, by Hamilton Beach of course! It’s programmable, which is nice, but the neatest thing in my book is that the lid has a rubber lip around it and locks into place for travel without spills.

I like to send things to my husband’s work and this lid is a life saver. Before we had this slow cooker, I always lined a cardboard box with a towel to place the slow cooker in and hoped for the best. He arrived at work with spills every time (bit of a NASCAR fan, that one). With the holidays coming up and us traveling all about with food, this baby is gonna get a lot of love from me! 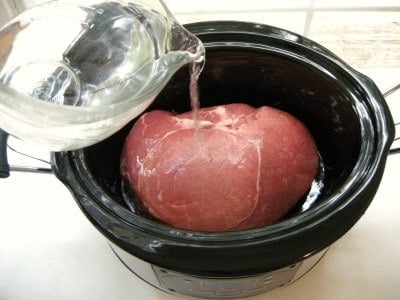 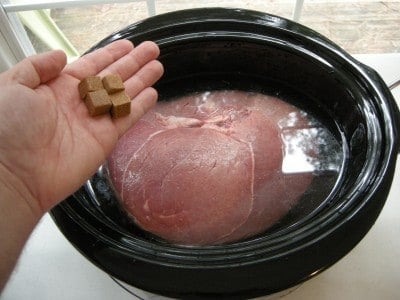 And your bouillon cubes. 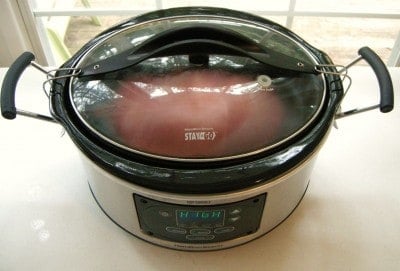 ~blinks and looks at the photo~

Okay apparently Ricky saw fit to latch it down like you would for travel. I normally don’t do that at home but maybe he was afraid it was going to blast off or something. Anyway, you can see how it latches.

That groove in the top is for a spoon to stick into, which comes with it. 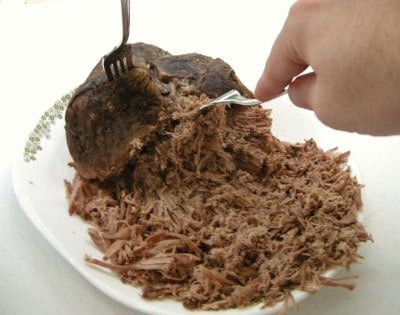 I cook mine on high all day.

Normally, anytime you are using a slow cooker (regardless of what you are cooking), times are as follows:

If cooking on High: done in 3-4 hours

But since I was cooking this in water only I wanted it to cook at a  higher temperature longer to be more tender. It is still slow cooking so this concept works. After seven or eight hours, take out your roast and shred it with two forks, like this. Discard liquid or reserve two cups to use in the next step.

This is the part that takes a little elbow grease and I didn’t mind one bit having someone else do it for a change. Ricky asked me later how he did and I said “You did SUCH a wonderful job that I’m going to let you shred the roast from here on out!”. 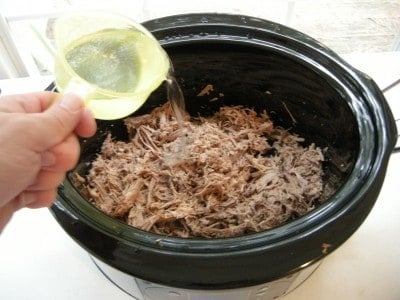 Take half of your roast and put it back in the slow cooker. Add about two cups of water (or reserved broth).

Place the other half in a zipper bag or sealed bowl and put in the refrigerator or freezer for our next meal. 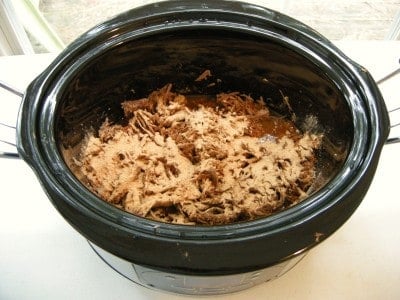 Pour Taco seasoning in and give it a good stir.

Put the lid back on and keep slow cooker on just until heated through. 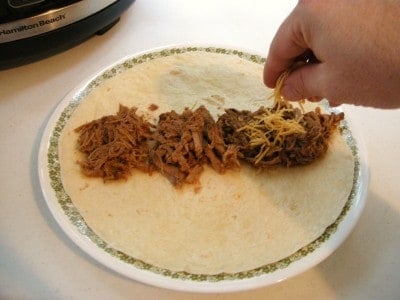 In our family that means cheese.

I prefer cheese, tomatoes, sour cream, onions, lettuce, etc…but the majority rules because I’m not going to buy that stuff just for me. 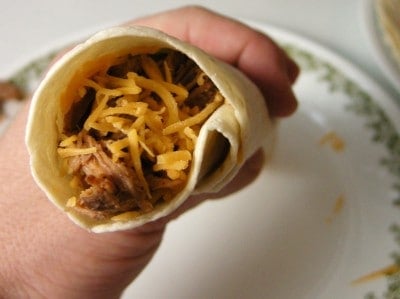 The last picture is always the most difficult to take and this was Ricky’s first shot at Food Photography.

I think it turned out pretty well. 🙂 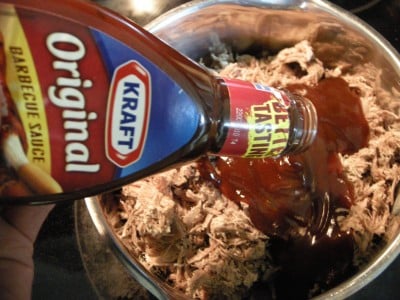 The next day, take out the rest of your shredded meat and place in a sauce pot or a microwave safe bowl.

Pour a bottle of Barbecue sauce over it and heat through. 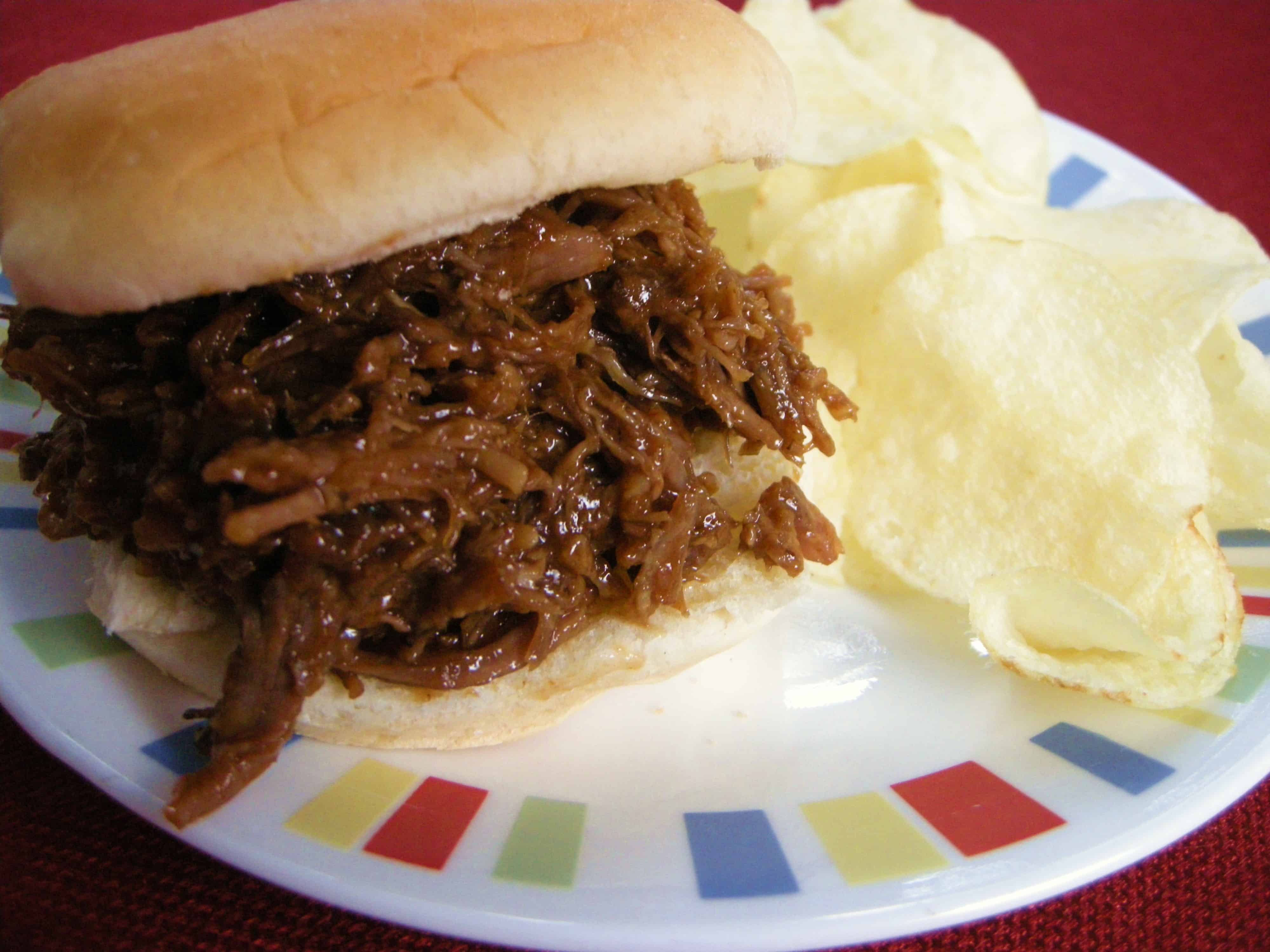 *Each of these meals fed our family of four with some to spare.

I’ve been a little under the weather (in body, not spirit!) and am just now getting back up to par. Thank you all for your understanding as I work to get caught up. I really appreciate you taking the time to read Southern plate and hope you know that your comments mean the world to me!

Learn From Yesterday,
Live for Today,
Hope For Tomorrow.

I have done this with a Boston butt and instead of water, cover it with Coke, and cook on high all day. So good!

Thanks for sharing Christy!