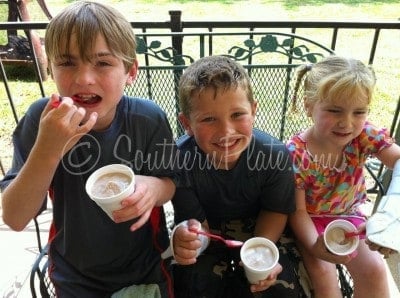 Today I’m bringing you a recipe for YooHoo Ice cream and the photos are from when we all made it at my parent’s house on the fourth of July this year. We sure did have a lot of fun and everyone enjoyed it. This ice cream is super simple to make, contains no eggs, and tastes very much like a Frosty from Wendy’s, if you are familiar with those.

I have an ulterior motive today, though, because there is a story on my heart that I’ve really been wanting to share with you. Since y’all are so generous in allowing me to do things like this, Sit back and get comfy because this one gets a bit long winded (I know, when has Christy ever been shortwinded, right?).

Back in my younger days, I made my living as a bank teller. It was a job I loved because I got to sit in a chair and had person after person come up to my window that I could talk to, smile with, and check in on their day. It was like getting to visit with a few hundred nice people each and every day. Kinda like blogging now that I think of it.

Now I’ve noticed that most people don’t pay much attention to the bank teller. They go up, hand their transaction, barely make eye contact, take their receipt, and walk off. Well y’all know that just wouldn’t do for me. I used to play a little game where I’d take the grouchiest ones and do my best to have them smiling before they left my window. It almost always worked, too! Sometimes it just ended up with a stare down. Did you know that if you look someone in the eye and smile really big, most human nature has them smilng right back without even realizing it? ~giggles~ Kinda like mind control – but only seeking the best results.

A few weeks into working at a little credit union in Huntsville this man came in one day and everyone bristled. He turned to my window and I could instantly see what kind of person he was. Handy things, those wrinkles. As we get older they tell everyone around us whether we’ve spent our life smiling or scowling.

Well, let me tell you, this man had wrinkles in all the places you hope folks dont have wrinkles when you are about to have to deal with them!

Not quite sure what was up just yet I greeted him with my usual “Hey! How are you today?”

He responded with a grunt, threw his money and deposit slip at my face, and said “Shut up and handle my money.”
Seriously.

I was pretty stunned but didn’t let my smile falter for long. Not knowing how to handle a situation like this (unfortunately I’ve had much more experince now but this was me at nineteen) I just ignored it and went about as if he hadn’t done such a thing. I chatted with him “Alrighty then, let me see here. Here we go! ” as I typed away and got his money deposited. I printed out his receipt and instinctively reached for my smiley face stamp (Did I mention I was the wacky teller who insisted on putting a big red smiley face on each receipt I handed out?) and stamped a big one right in the middle. I handed it back to him with a smile and he gave me a narrow eyed glare and snatched it up with a jerk.

The credit union was silent as he walked out and within the next few minutes you better believe I got the full story on that man!

A few weeks later he came in again, only I was ready for him this time. If he was going to be as hateful as he could, I was going to match him and be as nice as I could. I greeted him enthusiastically with an even bigger smile. Money was thrown in my face again and the previous scenario pretty much repeated. This went on for months but I didn’t back down. To be honest, I had no idea what else to do so rather than let him best me I figured I’d just keep it up! Then one day, as I handed him his smile face stamped receipt and said “You have a great day now!” he looked up at me and I saw the quickest flash of a grin as he said “You too”.

There was another stunned silence as he left the credit union that day. One of my friends said “I am not believing it, you got him to smile!”.

We seemed to have reached an understanding of sorts after that. He quit throwing money at me and instead just placed it on my counter, he always waited to come to my teller window, and I’d be as nice as I could to him the whole time. Sometimes he’d offer a brief glimpse of a smile, sometimes all he could manage was an affirming nod, but it really started to feel like we had a silent agreed upon friendship.

I left that credit union after three years when I figured out a way to go to college and several years back I heard that man had passed away. My heart ached for him and I really did feel a loss at knowing he was no longer with us. I still hurt for him even now.

It’s hard dealing with people like that but the way I figure, people like that are just about always people like that – which means if they are that hateful to you then that is likely the only way they know how to relate to anyone. You can imagine the reaction they get from those around them as a result.

Any kindness you can show is like pouring water on a dessert. At first, they won’t know how to react because it is so foreign to them – how tragic is that? So we have to be persistent in our kindness. I’m not saying follow them out the door and take them to lunch with them every day-a body can only take so much abuse, but when fate places them before you, if you have been  equipped with the grace to show them kindness and love them despite themselves, I feel like it is our responsibility to do so.

I’ve known a lot more people like that since then and there are some that even now, seem to view my face as target practice. I’ll just bet a lot of you are nodding as you read this thinking about your relative or co-worker that immediately sprang to mind at the start of my story. I look at these folks as someone that has been placed before me for a reason. I have been given the ability to love them, so I have the responsibility to do just that.

I know how people get like that, but that is a story for another day and likely another writer. My point is that if we have the ability to show kindness to the hardhearted among us and we find them placed before us, we have the responsibility to meet them where they are. Maybe we won’t be able to change them, but being able to show them kindness will definitely change us. 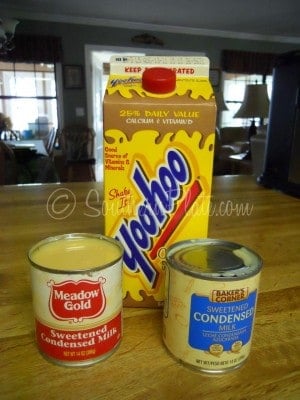 You’ll need: 2 cans of sweetened condensed milk and 1/2 gallon of yoo-hoo – or 64 ounces if you are using bottles.

I don’t know how Mama managed to find an actual half gallon because all I’ve ever seen were the bottles. Leave it to the one-stop-light town of Rogersville, Alabama to carry half gallon cartons of Yoo-hoo!

You’ll also need some rock salt and ice for your ice cream maker and if you can’t find Yoo-hoo, you can substitute chocolate milk. 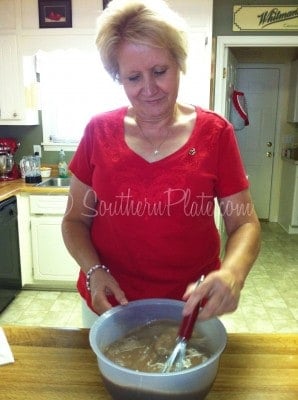 This is Mama, with her really big bowl, mixing yoohoo and sweetened condensed milk 🙂

Just use a whisk to mix it up.

If you can’t pour it all into your bowl pour about half of your yoohoo and all of your sweetened condensed milk to mix it that way. You can always stir the rest in once you get it in your ice cream canister. 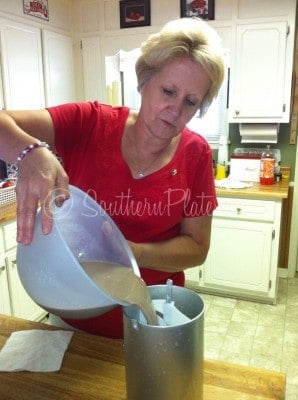 Now pour it into your canister and freeze according to your ice cream maker’s directions, which is really very easy. 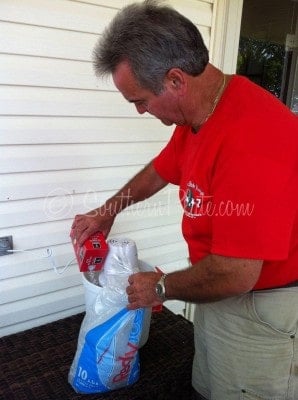 You just layer ice and rock salt around your canister (your manual will tell you how to do this) …. 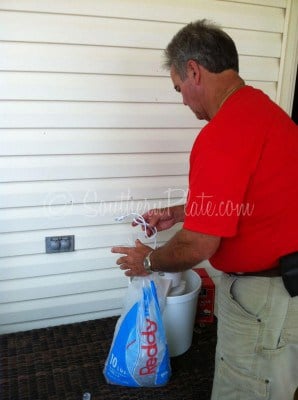 and plug it up and wait! 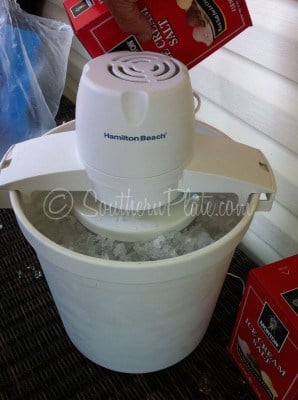 The waiting part can take 1 1/2 to two hours or so, sometimes more depending on how hot it is outside :).

I usually make ice cream indoors and place my ice ceram maker in a tray or big pan so it doesn’t leak water on the floor. It makes it much faster this way when it’s not having to battle 100+ degree weather.

This ice cream maker is a great electric Hamilton Beach model. I’m actually giving ten of those away tomorrow night so Click here to visit my giveaway post and leave a comment to be entered!

Serve to happy kids! This is Brady, my nephew Lane, and Katy Rose 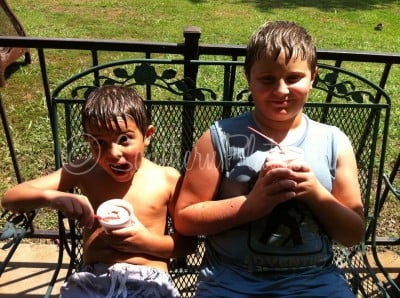 and these are my nephews Jake and Austin. They’d all been playing in the sprinkler. Aren’t sprinklers great?

In a very large bowl, stir together yoo-hoo and sweetened condensed milk with a whisk until well combined. Place mixture in the canister of your ice cream maker and freeze according to your ice cream freezer’s directions.

*You’ll need ice cream salt (sometimes called rock salt) and ice also. Use these according to the directions that come with your ice cream maker. If you are using a countertop ice cream maker that doesn’t need these, you will likely have to divide your mixture up and freeze in batches so it will all fit.

“The foolish man seeks happiness in the distance; the wise grows it under his feet.”

Submitted by Jenny. Click here to submit your quote.