Home » This and That » Sauces/Other » Comeback Sauce : Good for what ails ya! 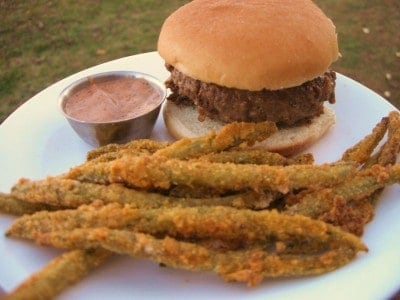 Today I am bringing you a darn good recipe for an all purpose sauce that will make you slap your mama! Comeback sauce goes with everything from chicken to burgers to fries to chips, you can even dip your bread in it if you don’t have anything else! I think I got this recipe from my cousin, Cindy, when she lived in Birmingham and had it at a restaurant there. I’m pretty sure that’s where it came from but I hated to call her this morning and ask because she has a wee one now and we all know the offense for calling and waking up the baby is punishable by death (or at least it should be!).

Either way, I’ve been whipping it up for many years now, since right after we got married. The versatility of it comes in that you can just as easily whip up just enough for one person as you can for one hundred.

You might be wondering what is pictured up above. Well that, my friends, is a darn good hamburger and ….um….~takes a steadying breath and hangs her head~ green bean fries. Yes, I said green bean fries. If that doesn’t sound natural to you the reason is because it isn’t. Those things, god love ’em, are just plain wrong. I have seen them cropping up on menus and across the internet and was obviously intrigued so I decided to make them for myself and give ’em a try. I mean, they look good, don’t they?

Now the initial appeal of green bean fries is that they are a healthier alternative to french fries. Having a background in nutrition, I am fully capable of seeing the benefits of a green bean over a french fry. However, when you take a green bean and batter it before deep frying it in oil, you’re kinda muddying the waters here. I decided to adapt the recipe and bake mine in the oven to actually keep some semblance of them being a healthier option. They turned out brown and crispy and the coating was well seasoned and had a pleasant flavor. Having said all of that, please read my next paragraph before trying this at home.

If you ever find yourself wanting to make green bean fries. Honey, baby, darlin, sweetheart, precious little angel of mine – just go get some french fries. Trust me on this. I mean, they were okay but certainly nothing to write home about. If you’re that desperate for a non fried dish, have an apple, eat some saltines, have a piece of cheese. If, after considering all of this you still feel compelled to have green bean fries, make plenty of comeback sauce :). 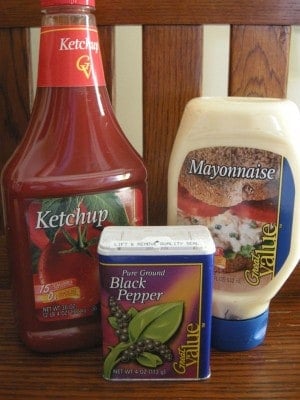 Ingredients are easy (as they usually are with my recipes): Ketchup, black pepper, mayo.

Now I don’t know if y’all realize this or not but I’m not  a big mayonnaise person. I don’t have an aversion to it I just don’t sit around thinking “MMMM Gots ta have me some Mayo!”. I do see it as a weee bit on the gross side. My point in telling you this is so that you know when I use mayonnaise in a recipe, its gonna be good! 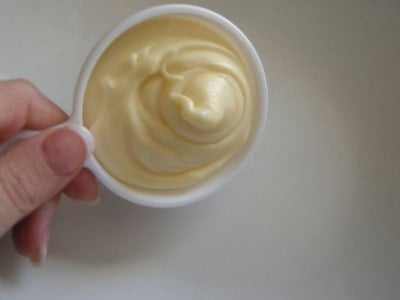 Here is the beauty of this, there is no specific amount of ingredients you have to have, its all done in proportions. You can just as easily whip up two tablespoons of sauce as you can two cups! 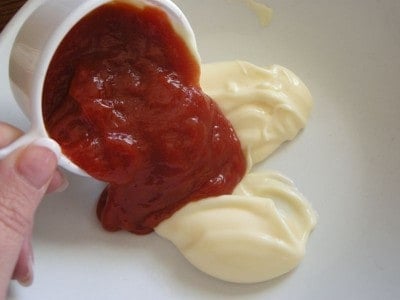 Place equal parts ketchup and mayonnaise in a bowl.

I’m doing 1/2 cups here because I just need enough to disguise the flavor to enhance the flavor of green bean fries for a few people. 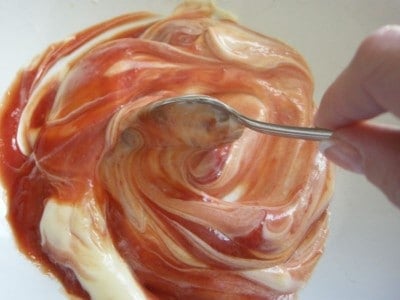 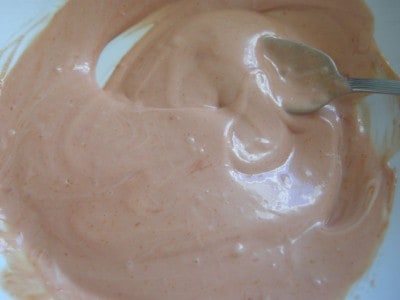 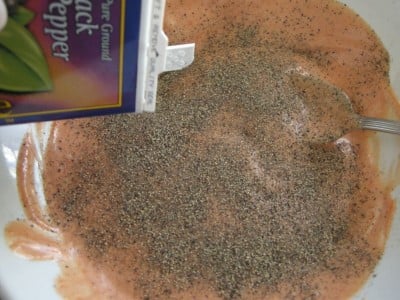 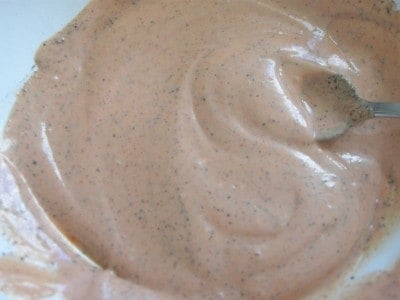 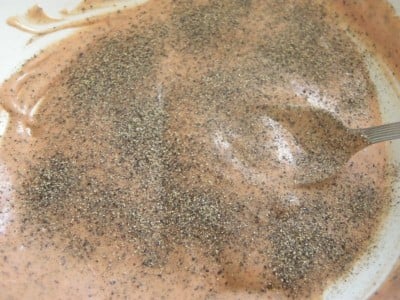 And cover in pepper again….

Now listen, that photo is not “covered” in pepper. It needs about a tablespoon or so more to be considered “covered”. I always get skittish and wimp out on covering my sauce. Don’t do like I do because I end up covering it in pepper three times instead of two due to lack of peppery goodness. Don’t worry, this is not a “hot” sauce at all. Think of the pepper as a spice because that is all it does in here but it is sooooo dang good. 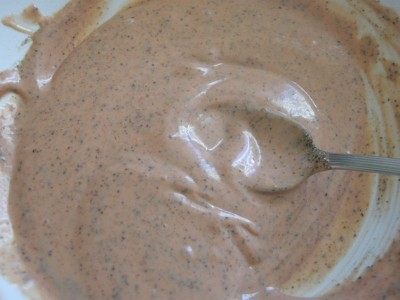 This is my final comeback sauce after I covered it in pepper three times instead of two because I was a wimp with the pepper. Don’t be a pepper wimp, learn from my wimpiness!

Ohmygosh this stuff is so good!!

Combine mayo and ketchup in a bowl. Completely cover the top with black pepper by sprinkling it on. Stir. Repeat once more. Serve!

This sauce is excellent with burgers, chicken, fries, and pretty much any other dippable or spreadable food :).

Christy… Received your cookbook over the weekend and love it. Are all the recipes you post in the cookbook? I don’t remember seeing this one. Thanks.

oops forget to say I still sometimes call my Dad “Daddy” too and I will soon be 65!

When I was growing up in New Jersey in the 50’s and 60’s we didn’t have a lot of extra money and my Mom made a salad dressing using chili sauce and mayo. We called it thousand island and put in on iceberg lettuce. Was good, ummmm might have to make again soon.

Mmmmmm…. I love Come-Back Sauce! Haven’t ever done the battered green bean fries though. My sauce is just a tad bit different from yours but somewhat similar. I was just thinking yesterday about makin’ some up and posting it soon myself – great minds think alike!! 🙂

I have always mixed up a version of this sauce for dipping boiled shrimp, with onion salt, garlic powder, a little sugar, maybe a little pepper. I’ll have to try it your way. Thanks for the idea.

We have a tiny kitchen, and when my husband picks up the pepper shaker, even the dog sneezes. He will LOVE this recipe!

Mmmmm, this sounds great! I’ll have to beg my husband to make some hamburgers for dinner soon! Sorry I haven’t posted my love for your recipes in awhile… I went to the hospital this last Tuesday. Skyler Marie decided to make her appearance 6 weeks early! She’s gorgeous, and we’re blessed to have her. 🙂