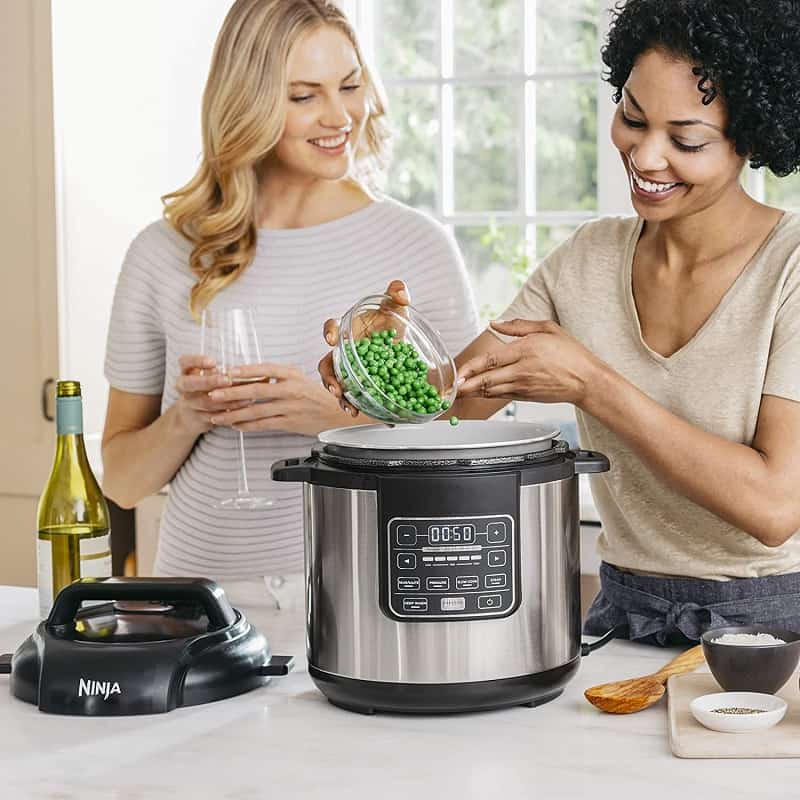 Ninja Instant Cooker is the budget entry-level multi-functional product from the kitchen appliance brand. It combines a pressure cooker with a slow cook, searing/saute, steam, and keep warm functions, for a 5-in-1 device. Within some of those functions, it has further settings, to allow you to customize your cooking.

Using the touch controls, simply select the function and set the temperature, and you can pretty much cook anything in a multicooker like Ninja Instant. Savory or sweet! You can sear or braise meats and fish, or slow cook for stews, steam or saute vegetables, cook rice and other grains, and even bake cakes. The timer can be set for automatic shut off to cook even when you’re out.

Ninja instant Cooker gives you the ability to make mouth-wateringly delicious meals simply and quickly. Its pressure mode cooks up to 70% faster than traditional cooking methods. And because of its design and cooking method, it is healthier and more nutritional too.

It gives you 2 pressure levels, low and high, and 5 sear/sauté temperature settings, for greater cooking control. Also, the slow cook and steam functions offer the flexibility of multiple cook times and 3 temperature settings. So whether you prefer to just set it and leave it, or be more hands-on, Ninja Instant Cooker is your essential tool to help you make tasty food easily in minutes rather than hours. All in one 6-quart ceramic-coated nonstick pot, meaning less washing up afterward. Who doesn’t want that?!

Instant Cooker is smaller and has less power than the rest of its Ninja multicooker stablemates. And with that, comes fewer functions. But at a considerably lower price. So if you don’t need all the ‘bells and whistles’ of the other models, then it could be the right choice for you. 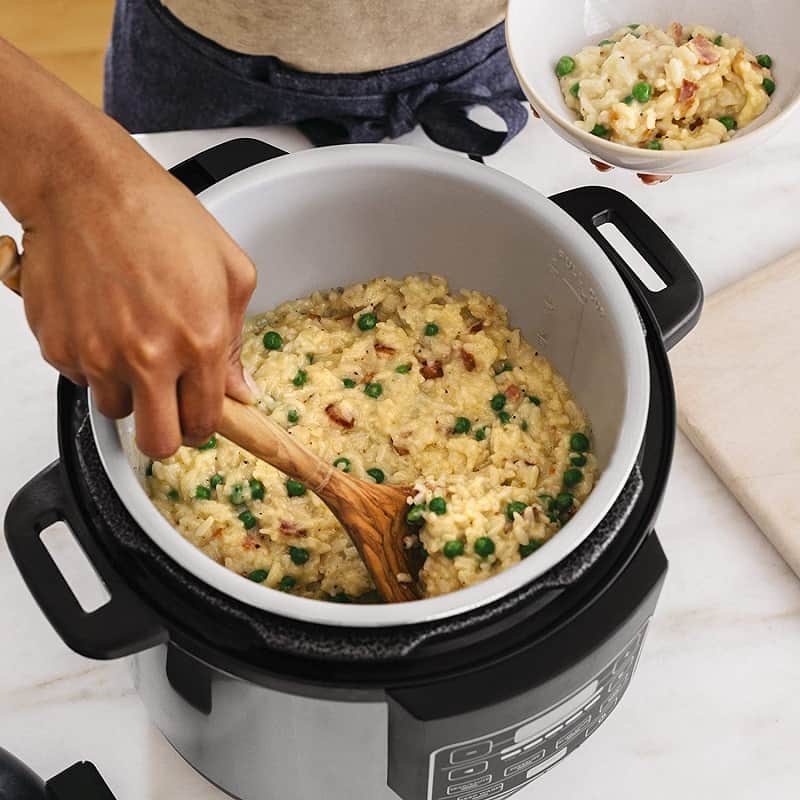 Ninja Instant Cooker is a worthy investment in the kitchen for anyone; whether you’re a working person or stay at home person, with or without a family, or a student. For those who enjoy cooking and those who don’t. The experienced or the beginner. Anyone and everyone!

If you don’t have a pressure cooker already, then we’d recommend that you get one. And as a budget entry-level bit of kit, Ninja Instant Cooker is a good place to start.
It’s great at making all sorts of foods simply and easily. Anyone who leads a busy life can benefit from just throwing the ingredients into the one pot of this pressure or slow cooker, program the function and settings, and it will do the rest. As it’s portable and electric, you’re not just tied to the kitchen with it even.

Although as a pressure cooker it really shines in reducing cooking time, its uses and benefits aren’t just limited to saving you time and hassle. By cooking foods faster and with less liquid, more nutrients are retained. The longer that foods are cooked, especially in liquid, the more they lose nutrients and with it, color and flavor, as greater minerals and vitamins evaporate and dilute.

Reduced cooking time also results in reduced energy use and so reduced bills. With one-pot, even more so compared to the likely several pots on separate burners of other cooking methods. So Ninja Instant Cooker saves you money too; didn’t we say that it was a good investment? And less energy usage is better for the environment too!

All of this makes Ninja Instant Cooker an appliance to suit anyone who wants delicious and nutritious meals; tasty and healthy food that’s cooked quickly and is good for you, your pocket, and the planet.

Via its digital control panel, Ninja Instant Cooker provides a wide range of one-touch possibilities to make preparing tasty and healthy meals easily. Just select and program the 5 built-in cooking functions: pressure cook (high and low), slow cook, steam, sear/sauté, and keep warm. In addition, five sear/sauté settings allow you to do either of those methods at different temperatures.

With the pressure cook function, you can cook meals 70% quicker than with traditional stovetop methods. While saving energy in the cooking process, it serves up delicious food that is nutritious, as its design and construction lock the key elements inside the unit while cooking.

In principle, it actually works very similarly to the stovetop pressure cooker that you might have memories of from your childhood. But without the distinct noise of the old units. And as a separate and independent electric appliance, it works much faster. Just follow the clearly-presented cooking times in the QuickStart guide. You’ll have delicious and nutritious potatoes in six minutes, chicken pieces in five, and rice in just two. If you want a whole roast, you’ll have one in under an hour!

But not just as a pressure cooker that Ninja Instant Cooker shines. And with the sear/sauté function you can brown your meat before finishing. The steam function is excellent for sealing all the goodness into veggies. Its slow cook function also works similarly to slow cookers used in the past. It has been appreciated greatly for its slow cooking, pressure cooking, and steaming function goodness for those veggies. The slow cook function does achieve the same process and results as its slow cookers predecessors. After preparing and cooking you can keep it all warm until you’re ready to eat.

As well as multiple pre-sets, Ninja Instant Cooker’s LED control panel has advanced features like five stovetop settings, customizable cooking programs, and dual pressure cooking settings. All workable with the timer, you can set it to have dinner ready and still warm when the kids get back in from school, or you return from work.

Ninja Instant Cooker gives you total cooking control. But it doesn’t sap the creativity and flair out of cooking. Ninja has also done well in giving the user great control over pressure, temperature, and time. And if you require a little inspiration, their own published and provided recipes are easy to closely follow.

The best part is that when you’re done you only have one pot to clean. And even that is a breeze since nothing sticks to its ceramic cooking pot, plus that and the stainless steel stamping rack are dishwasher safe. Ninja Instant Cooker includes a 6-quart ceramic-coated nonstick pot and a stainless steel steam rack, both of which are dishwasher safe. Ceramic is safer to use than other nonstick material, such as Teflon, as it does not peel over time, and its non-stick properties reliably last longer.

The more expensive Ninja Foodi pot has a Teflon coating, which works well as a non-stick pan, but can start peeling after a while with some misuse like constant scraping. The cheaper Instant Cooker beats it in this respect, with its non-stick FDA-approved and PTFE-free ceramic coating.

Ninja Instant also has the advantages of being more compact, so more suitable for a smaller kitchen, and also lighter. Its body is constructed from plastic, and the cooking pot is made from aluminum.

Ninja Instant Pot has 11 levels of safety and has gained certification after fulfilling the demanding UL lab testing, which aims to make cooking a convenient and safe experience.

Coming with a one-year limited warranty, it’s a very good budget option if you don’t need all the functions of its more expensive stablemates. And as we’ve highlighted, Ninja Instant Cooker even has some advantages. All at a cheaper price!

It’s a personal preference of course, and some people won’t be bothered, only maybe by its lesser functionality, but its black and silver finish looks a lot cheaper than the Foodi.

And although Ninja Instant Cooker boasts of numerous benefits certain limitations cannot be overlooked. Some previous users have reported that they had trouble getting its functioning right as it is better to set the pressure level first and then the timer, which is not mentioned in the user manual.

Also, some have complained about issues while setting the lid as the arrows on the lid are not very clearly visible. The steam that shoots out on release emits a loud noise. But admittedly, that’s not uncommon in pressure cookers more generally. Other previous users have also noted quality control issues.

Our findings were that the sautéing function needs to be improved. The main unit itself and the lids, the non-dishwashable parts, have awkward crevices that are hard to get into, making this part of the washing-up a pain.

Also, you can’t cool it and your food down immediately if that’s what you want, as the keep-warm function automatically kicks-in after cooking is over. If you’re at home, you can just remove the food. But if you’re out this isn’t possible of course.

Lastly, with only a 6-quart capacity available, it’s really for large households making large meals only. We’d like to see Ninja make a scaled-down version for smaller ones, or for people, such as students, who are likely to be cooking just for themselves most of the time. 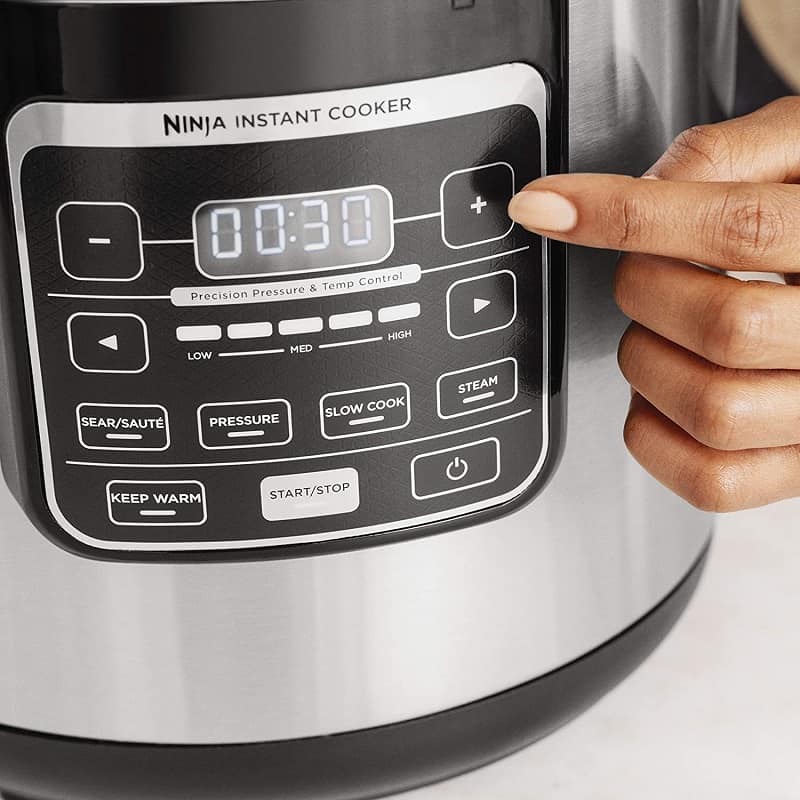 It cooks food up to 70% faster than traditional cooking methods (versus slow-cooked, braised, or low-simmer recipes).

This cooker includes a digital, programmable control panel that comes with 5 built-in cooking functions: pressure cook (high and low), slow cook, steam, sear/sauté, and keep warm. The 5 sear/sauté settings allow you to sauté and sear at a temperature of your choosing.

Your peace of mind is aided by the 11 levels of safety. Ninja Instant Cooker has passed rigorous testing to earn UL safety certification, giving you confidence and reassurance while cooking.

Ninja Instant Cooker comes with a 10-recipe ‘inspiration guide’ to help get you started straight out of the box.

Ninja manufactures and markets kitchen multitask appliances, which have come to be referred to as a Swiss Army Knife for the kitchen!
With its Instant Cooker, it provides a lower-cost and budget-priced entry-level product. Along with the price, the size and functionality have been scaled back, but not the quality performance. Also, they’ve been reduced relatively not as much as the cost.

Obviously, it’s ‘horses for courses’, and down to if you need all ‘the bells and whistles’ of a more expensive model; will you use all of the functions enough to justify the extra expenditure. If you don’t, and also aren’t bothered by its cheaper look, then the Ninja Instant provides amazing value and should suit you just fine.