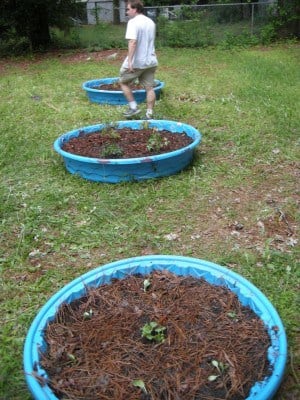 My Grandaddy was a wiz in the garden. Each year for as long as I can remember, he’d work the land and turn out an abundance of fresh melons and vegetables that kept the entire family harvest happy! Even when he got “in a bad way” as we say around here, he still kept a small garden and took great pride in tending it and generously giving away the fruits of his labor. Sometimes I think he only grew a garden because he enjoyed giving things away so much. If you know anyone in my family you know that part is in our blood, we love to give things to people.

I’ve never put in a garden like he did but I’ve always grown tomatoes in buckets on my back porch just like he showed me how to do. This year though, I decided to expand my container gardening enterprise and detail exactly how I am doing that for all of you. I plan on posting progress reports as the summer goes on and would love to hear from you about your gardening efforts as well!

As a novice gardener with limited time and resources, a raised bed garden is ideal for many reasons.

Why I Chose To Make My Gardens In Kiddie Pools

My ideal raised bed garden would have a wood frame, about 4 feet by 4 feet or two 2 by 4 feet frames and be twelve inches deep. However, there exist among us three types of women.

Type 1 : Declares that she wants a raised bed garden. She writes up a list of supplies, goes to the store and gathers them, comes home and builds it. (You go, girl!)

Type 2: Declares that she wants a raised bed garden. She batts her lashes at various individuals who step forward to build it for her with gladness in their hearts at being able to do such a task on her behalf (meet my sister).

You guessed it folks, Yours truly is a Type 3 gal!

Since I am completely lacking in builder gal skills…We’re going to have to do this the easy way.

And THIS is how I made THREE raised bed gardens from start to finish in under thirty minutes. 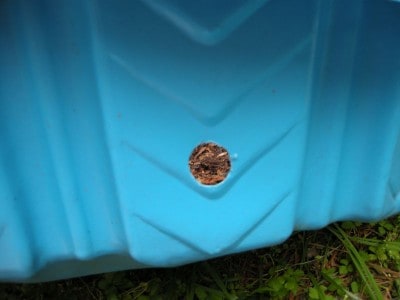 Begin by drilling holes, about two inches from the bottom, around the sides of your pool.

I drilled them at twelve inch intervals (I just estimated) and my holes are done with a one inch bit. 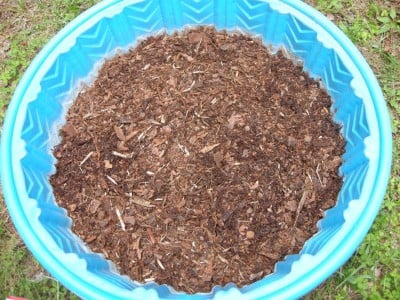 Put an inch or two of mulch (or hay or peat moss) in the bottom of your pool. 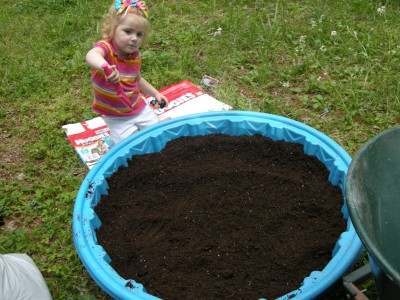 Top that off with your gardening soil. 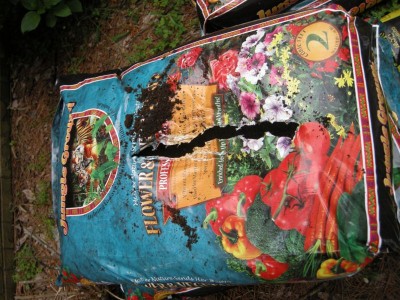 And here is the easy way to do that… I cut my 40 pound bag of dirt open with my shovel and shoveled it into the pool until the bag was light enough for me to easily lift. Then I poured the rest of the dirt in.

In gardening, as in cooking, easy is good. 🙂 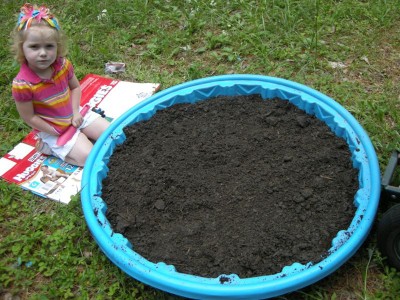 Then I put about 1/4 of a bag of Black Kow compost into the pool.

(That’s how it is spelled on the bag. For pride’s sake, I feel the need to assure you that I know how to spell c-o-w)

I just cut my bag open with the shovel same as before and shoveled a bit in there, then I stirred it up a bit to distribute it throughout.

From there, I added about twenty pounds of topsoil. Topsoil is very cheap. I paid a little over a dollar a bag for it at Wally World. 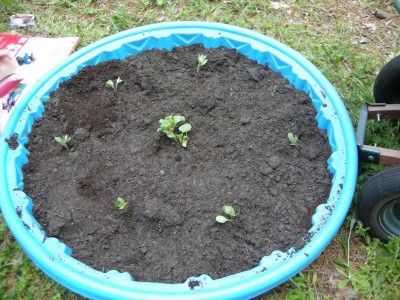 I put in my plants according to the directions on each one.

These are cantaloupes and I likely have far too many but I’m just going to let them run over the pool and grow along the ground. 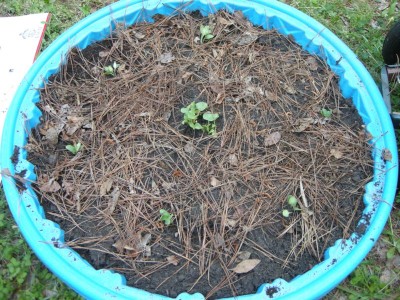 We’re expecting some hard rain and I’m worried about it washing away the soil around my plants before they have time to get rooted so I added some pine needles around the top to help protect the soil from the force of the rain. Once they come in better, I’m going to cover the top more fully with pine needles or mulch to help keep weeds down. When I got done with my other gardens, I ended up with an excess of mulch so I used that on the tops instead of the needles.

At our new house, pine needles are in abundance so I wanted to experiment with using something I had available. 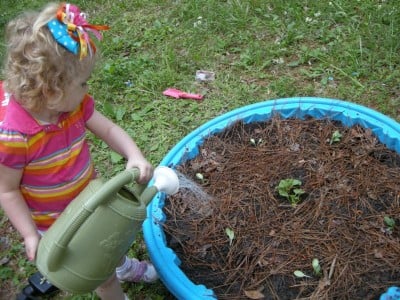 These gardens are so nice because they are such an easy to manage size. This is Katy watering the smallest garden with our watering can. Right now the kids are fighting over who gets to water what garden. We’ll see if that holds up!

I let them each have a say in planting one thing. Brady chose cantaloupes and Katy chose carrots. Tomatoes were my first choice because they are so widely used in cooking and incredibly easy to put up in the freezer or for canning. Fried green tomatoes will be a wonderful treat soon, too! I’ll show you how I put up my vegetables as they begin to come in. There is nothing at all like tomatoes from your own garden to put into wintertime stews and other dishes!

Bell Peppers are another favorite of mine but almost a dollar each to buy! Like tomatoes, they are very easy to put up as well so the two of those should prove to be a money saving crop for me.

I’ll try to get you some pictures of us with the large gardens soon so you can have a better perspective of their size. 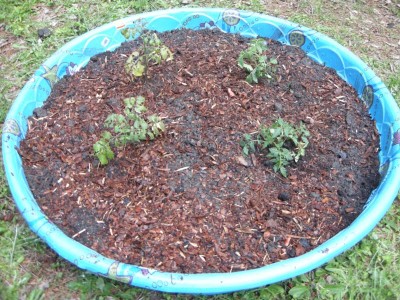 This is four tomato plants with carrots planted around the outer edge.

I prefer to start my plants indoors from seeds but due to moving, I opted for buying plants this year. 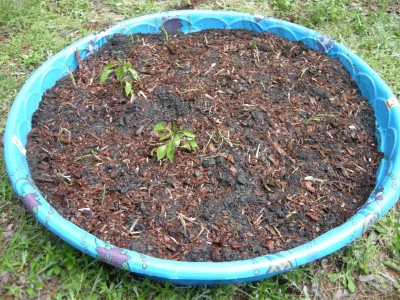 Bell peppers in the center with Vidalia onions going around the outer edge.

My three gardens. Start to finish, the entire project was done in under thirty minutes.

Although it took me about ten minutes to get all of my plants in :).

There is plenty of space in between them for the lawn mower but surprisingly, they are also easy to move around still.

I’ve seen some people say these will last for five or six years but I’m thinking three or four tops until they become brittle and need replacing.

All in all, nice little gardens and very little trouble! I can’t imagine an easier way. I’ll keep you posted all summer on how they are coming along. Hopefully, having Southern Plate readers to answer to will keep me motivated when I really don’t want to go outside in the Alabama summer heat!

5 FT Kiddie Pools – $15 each (check now to see if anyone is giving these away from last year. They get cracks in them but would be perfect for a garden still!)

Approximate cost of a small pool garden would be: $20.74

Approximate cost of a large pool garden would be: $33.98

Note: I found it was cheaper to buy mulch and top soil at Wal Mart although I purchased my garden soil at Lowes because I had a coupon to use there to get $10 off.

I did math for y’all again. If this ain’t love, I don’t know what is!

We’re FINALLY going to be living in our new house as of this weekend! We’ve been moving slowly but school activities have been so incredibly busy lately (where is the second wife when you need one?). Friday my in laws are coming over from Georgia as well as my brother and sister in law and their two young ones to help us move. Its going to be an exhausting weekend but well worth the trouble! We’re so grateful to have all of the help!

Of course, I am spending my time fretting over what to feed everyone instead of packing.. ~grins~

I hope you all have a wonderful weekend!

Such a genius idea, I would like to know whether an inflatable pool can do the work, it might sound stupid but we have unused kids inflatable pool in our garage but do u think it can be used as a garden bed. Really appreciate ur help if u can answer the question.

Hello, I realize this post is super old but I googled kiddie pool raised bed garden and this popped up! Quick question, why did you drill holes on the side in stead of the bottom? This stuff is all new to me. Thank you
Kerrie

Welcome and no worries! I usually keep up with the new comments on the back end so I see them regardless of how old the post it. I put the holes on the sides to help the soil drain but to also help retain some water. It would have drained a lot faster if I had of put them on the bottom and where we live it gets VERY hot in the summer and sometimes we have draught as well, so I kinda cut my losses by putting them on the sides a bit 🙂 Hope this helps!

Are there any follow up posts to this post? I’d like to see how the plants look further along in the growing season. I don’t see any labels I can click on, if I’ve missed them, I apologize. Thanks

Hey Julie,
This is a post from eight years ago. I’m afraid I don’t have any follow ups but they worked out really well! My only problem was that our wild rabbits ate through the cantaloupe vines and disconnected all of the fruit, so that was a bust ;). Cucumbers did exceedingly well and we had no problems other than ones caused by rabbits 😉 We can’t have a garden now because we have so many trees in our yard that they have grown up over the years and blocked out the sun from our garden spot.

Thank you so much Christy! I never thought to use these!

My mom always planted in big containers but this is even better!

Thank You for your instructions on pool gardening. I’ve had a home with many beds of garden vegetables. It’s always been productive for me. However, my relatives and apartment friends are at a loss to jump in the self sufficiency gardening groove.
Your pool instructions will provide an easy way to get new gardeners a chance to commit to fresh garden vegetables without the mess and hard work of rototillers, mass fertilizer spreading and worm deficiencies. Now problems like this can wait for personal interest to build within my friends to provide motivation for more permanent changes in my friends garden habits. Thanks again.