This failproof 7-minute frosting is deliciously light, fluffy, and the perfect topping for almost any cake. Enjoy the icing’s marshmallow cream-like smoothness that will make you and your family and friends smile. 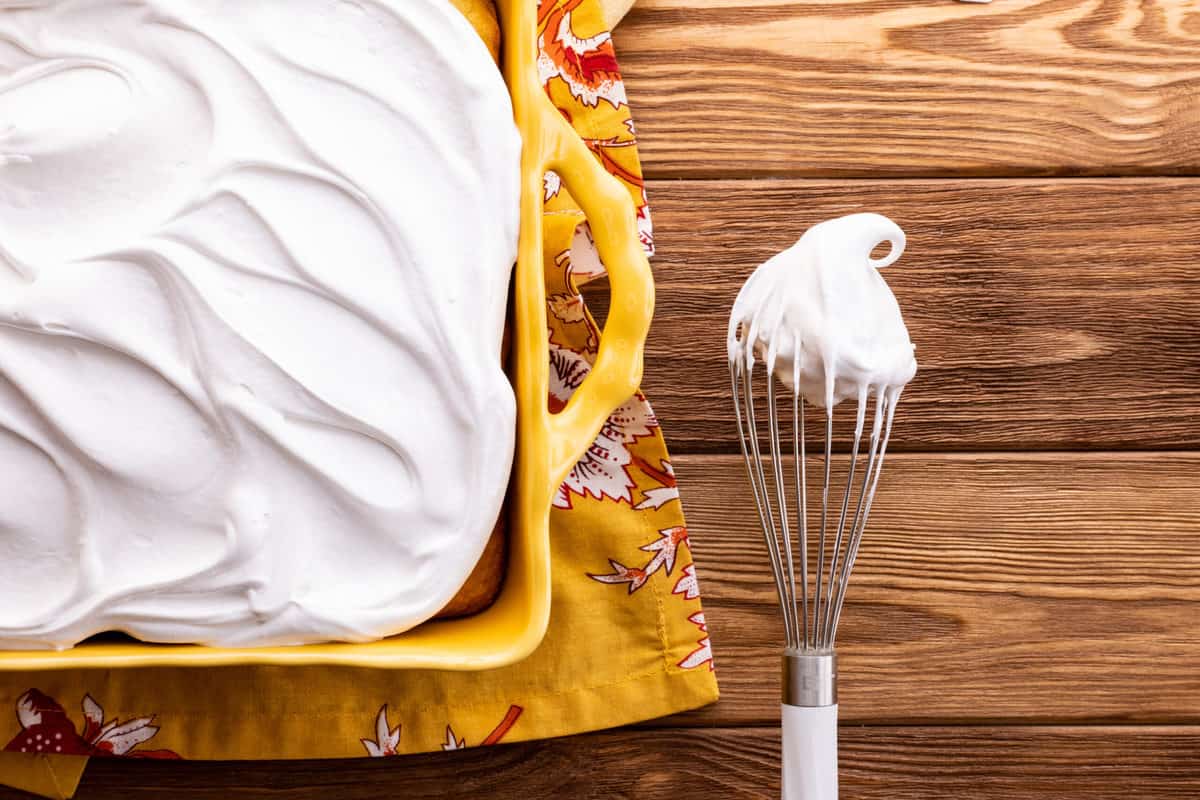 If you’ve never had this old-fashioned 7-minute frosting, I’d like to apologize. I am so sorry that you’ve missed out all these years, seeing as it’s been around since the early 1900s. This is a fluffy, glossy, and light-tasting icing reminiscent of meringue… only better and spreadable. It’s commonly found atop coconut cakes or other holiday cake treasures but goes just as easily with a simple pound cake or chocolate cake too.

There are many reasons to love this recipe, but most importantly it’s quick to make, easy to spread, and doesn’t include a double boiler like so many others. Unlike most 7-minute frosting recipes, this one is also not dependent on the weather or you crossing your pinky toes and perfectly reciting the magic word with five extra-large marshmallows in your mouth. No siree, this one comes out perfect every time. So if you’re a beginner baker looking for a foolproof frosting recipe, you’re in the right place.

Whenever I make this 7-minute frosting, there are tiny sugar crystals mixed amid the fluffy velvet cream. It’s just perfection. So don’t think you did anything wrong. Just dip your spoon in again and pop it in your mouth.  Close your eyes, and enjoy the smoothness of this marshmallow fluff-like icing as it melts in your mouth.

If you’re looking for other foolproof frosting recipes, check out my creamy chocolate frosting or royal icing recipe. 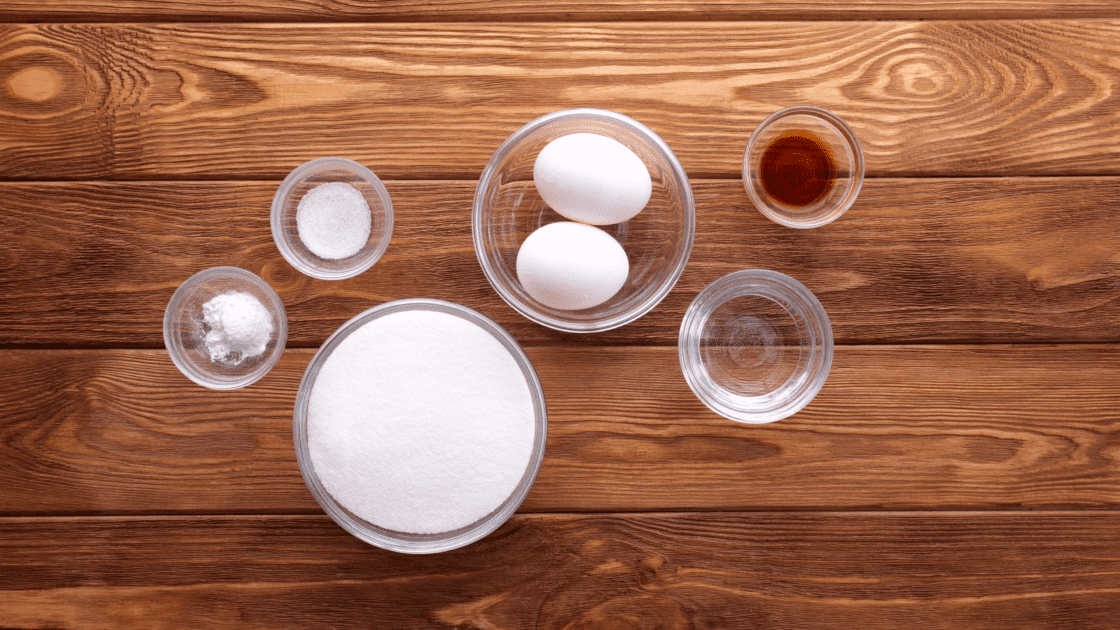 How to Make 7 Minute Frosting 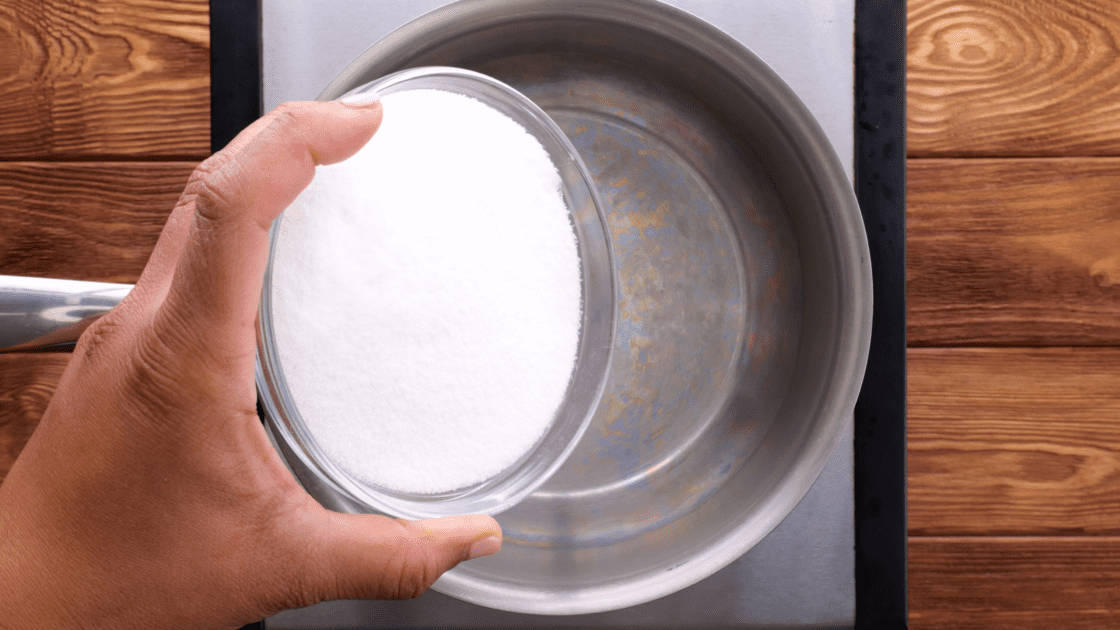 Place all ingredients into a thick-bottomed saucepot, starting with the sugar.

You just want to use a good stainless steel pot for this, definitely not one with a nonstick coating because we are going to beat it for several minutes and all that mess would flake off and get in your icing – so don’t do that! 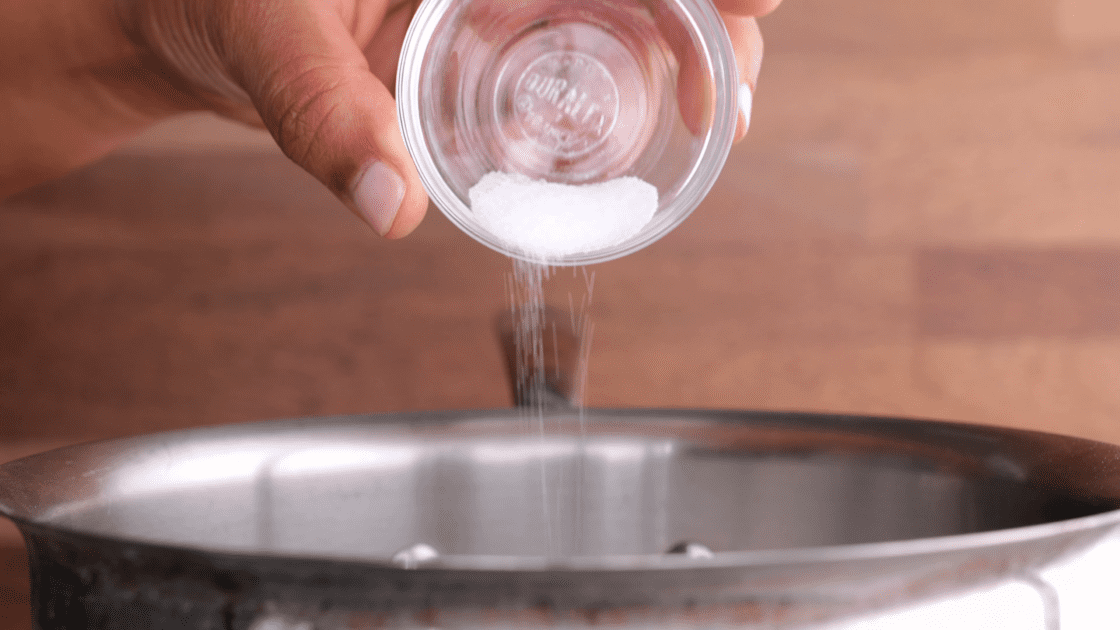 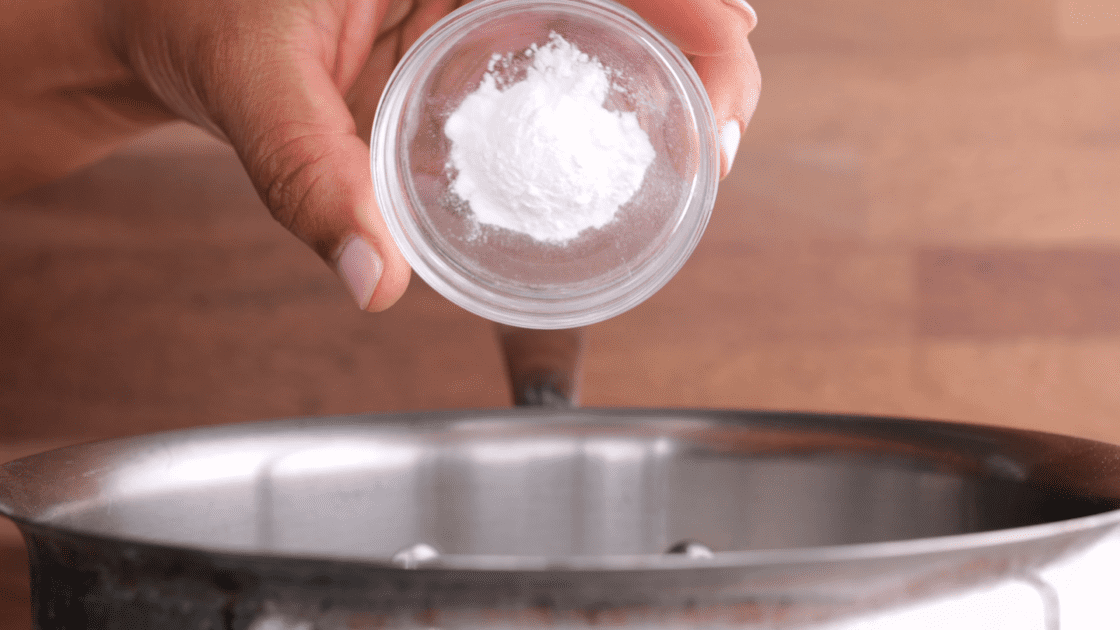 Then the cream of tartar. 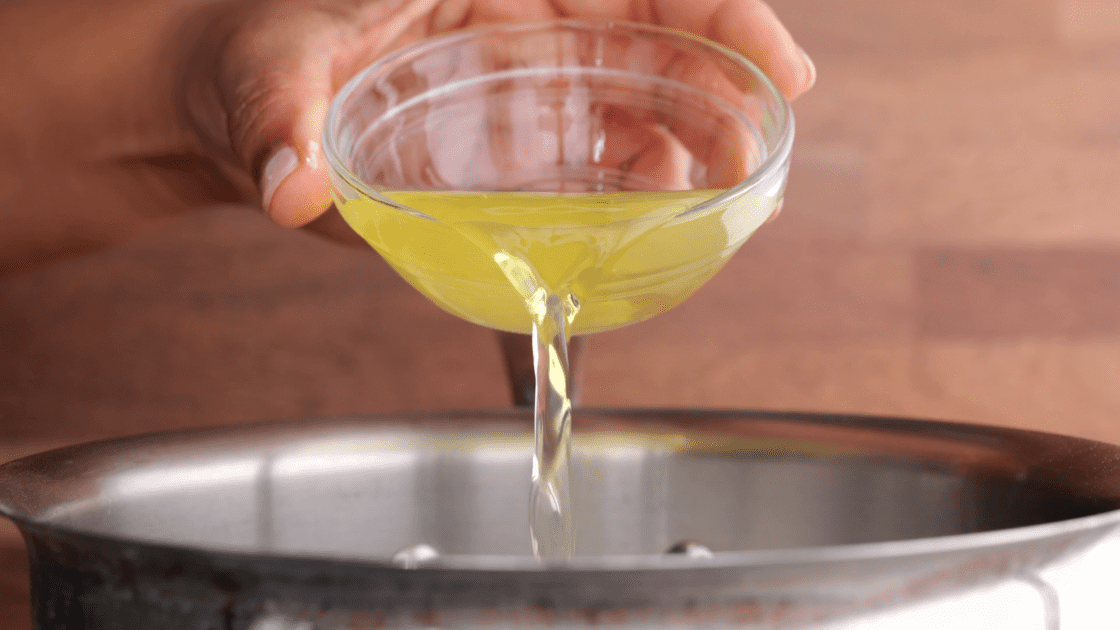 And the egg whites.

When separating your eggs for this recipe, it is a good idea to do so in a separate bowl rather than the pot you are going to combine all ingredients in. The reason for this is that you need only the egg whites and if you get any of the egg yolk mixed in, your icing won’t turn out. By separating them beforehand, you can throw out anything that gets a yolk in it (or dig out the egg yolk if you can without combining it with the white) rather than having to throw out your entire pot of ingredients. 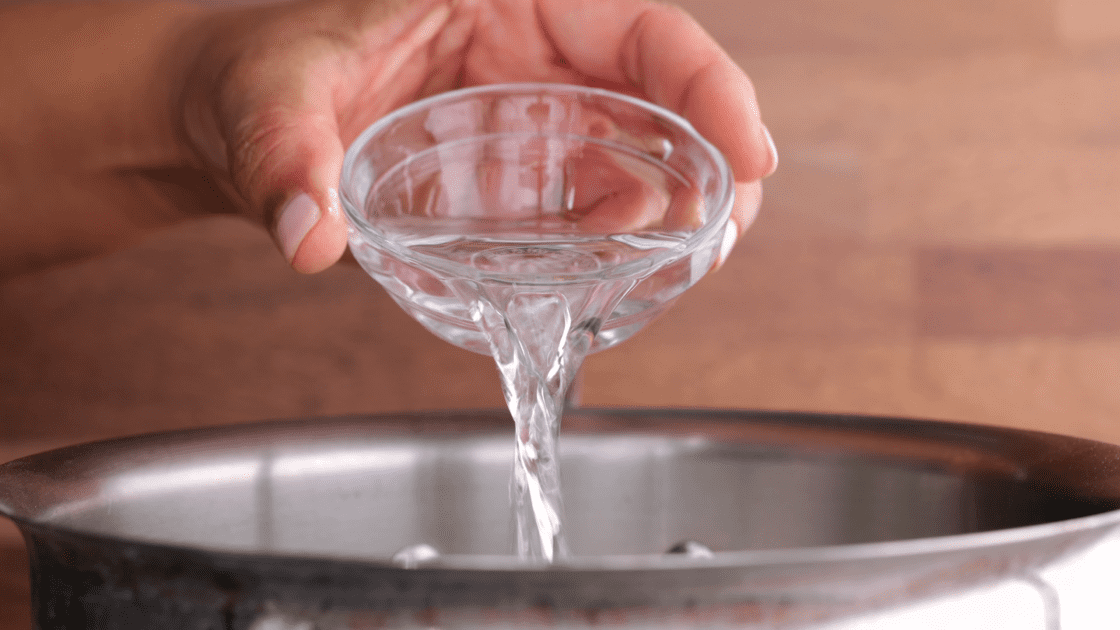 Finally, add the water. We don’t add the vanilla extract until the end. 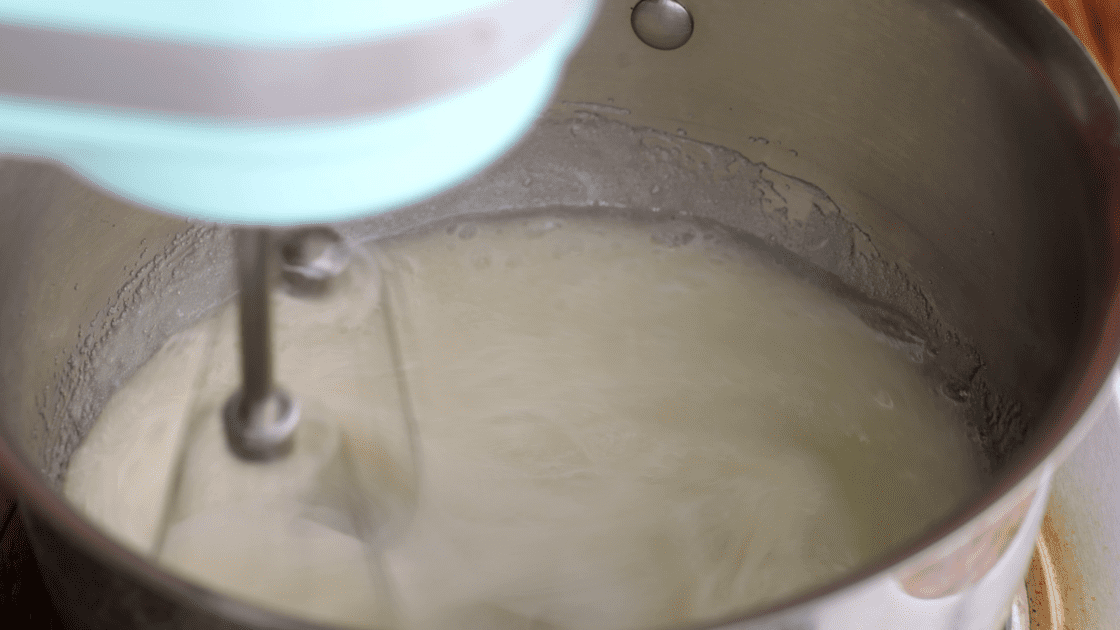 Place this mixture over medium-low heat (in between low and medium, so about a four on my stove) and turn that electric mixer on.

Beat this constantly for about 5 to 7 minutes, or until sugar dissolves and stiff peaks form. 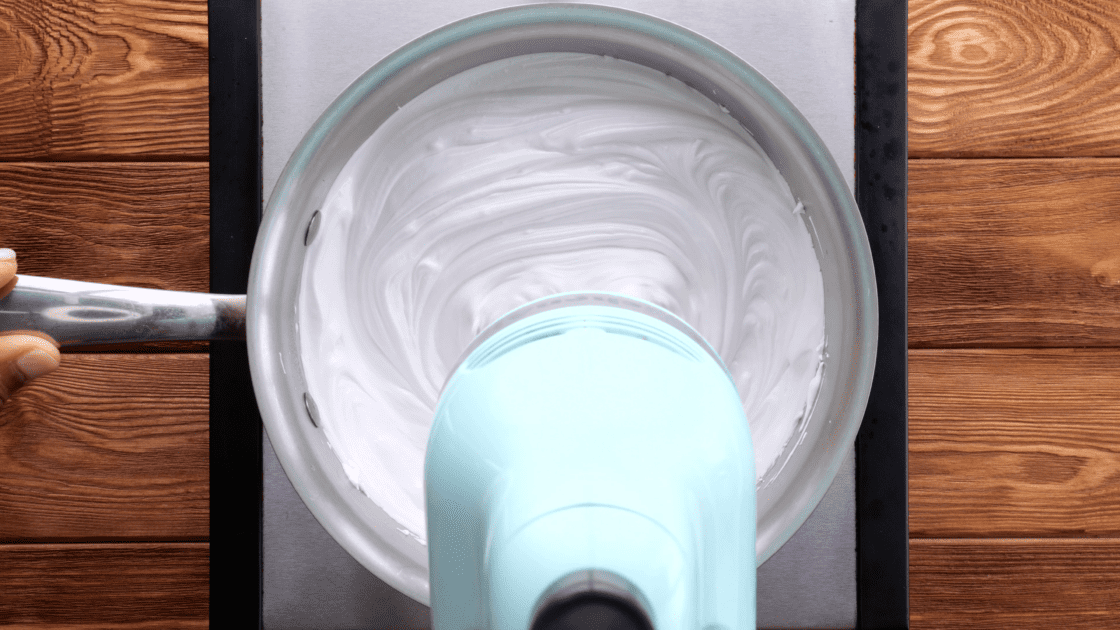 A word of caution

Now listen, right about now you’re going to be thinking “Christy is crazy. This is never going to form stiff peaks. I’m sure this is as good as it will get. I might as well give up and just ice the cake.”

Note about following this recipe: The pattern on the internet these days seems to be taking a recipe, making fifty thousand substitutions and alterations to it, and then getting your tinsel in a tizzy when it doesn’t turn out exactly like the original recipe said it would. I’m not saying you would ever do that, mind you, but I do want to issue a word of caution that this is one of those recipes which really must be followed to the letter. If you go rogue, you get rogue results. Maybe those will be good, maybe those will be bad, but they won’t be on me either way. 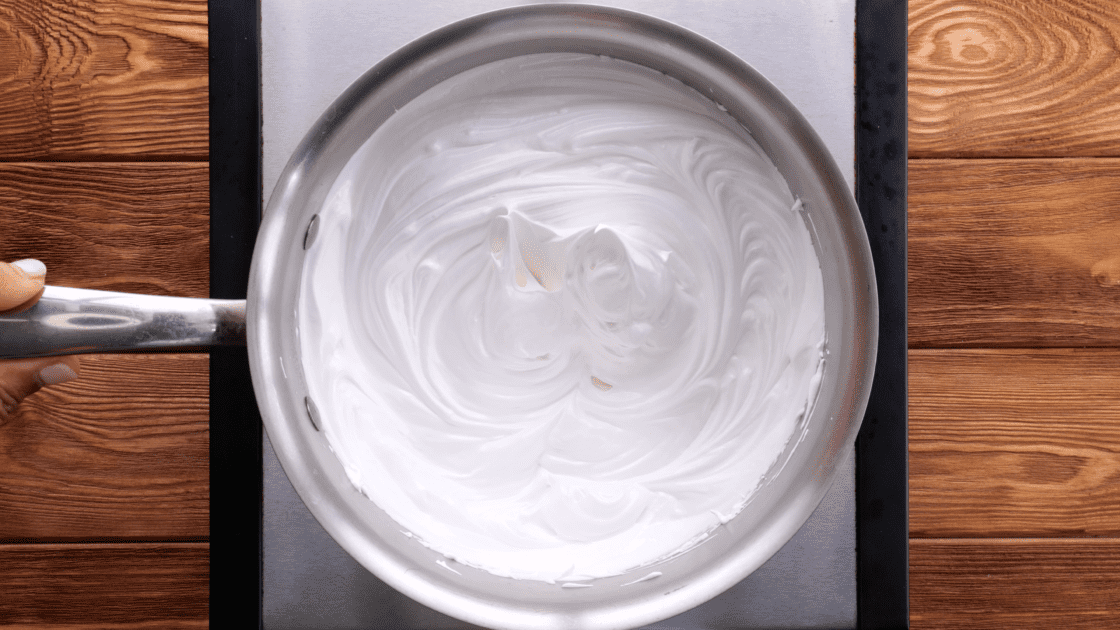 Look! We have stiffness! You can see how the frosting reaches and maintains the trail left by the beaters rather than sliding back into a glop. This is what we want. 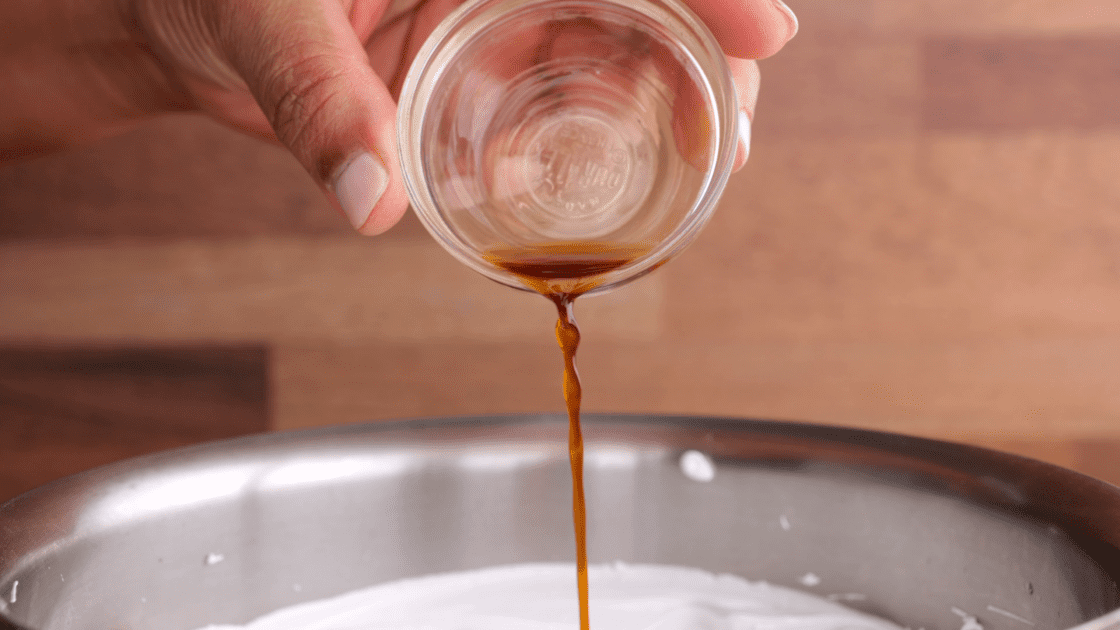 Now add in your vanilla extract. 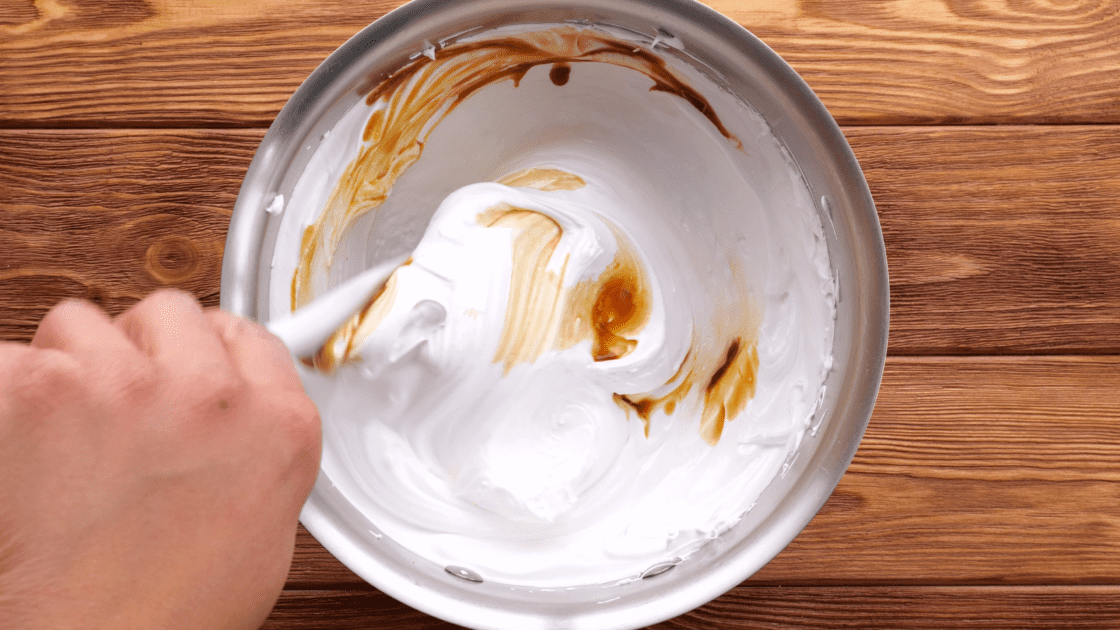 Fold in the vanilla extract. Maintain that perfect trail left from the beaters and keep from having any of the icing sliding back down to smooth. Remove this from the heat and have a little taste of it – pure marshmallow heaven. 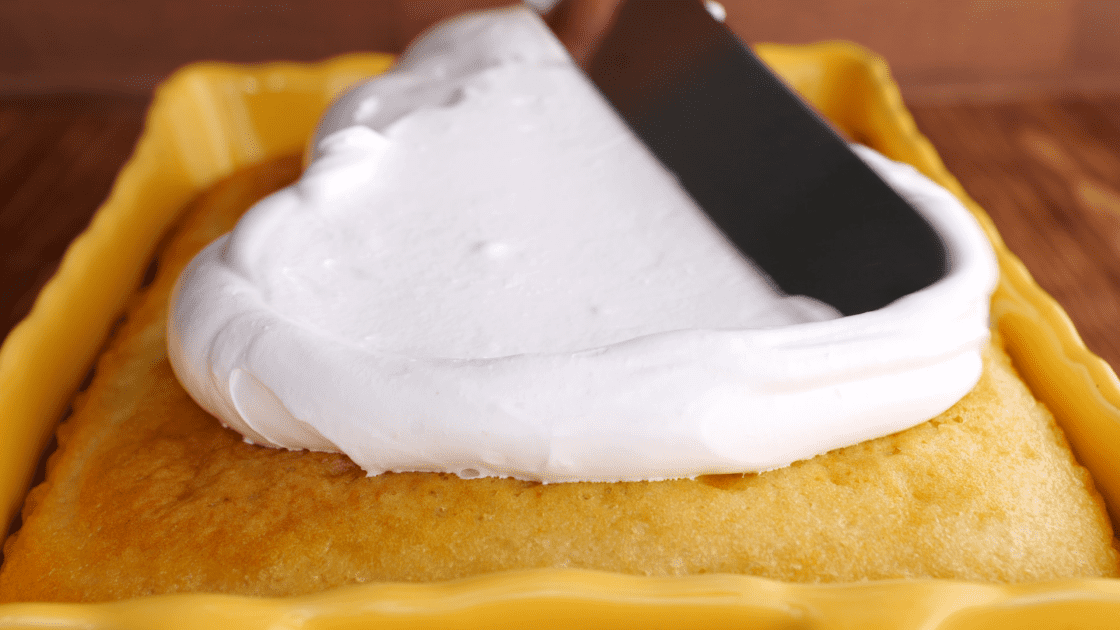 Ice your cake with this 7-minute frosting and you’re good to go. 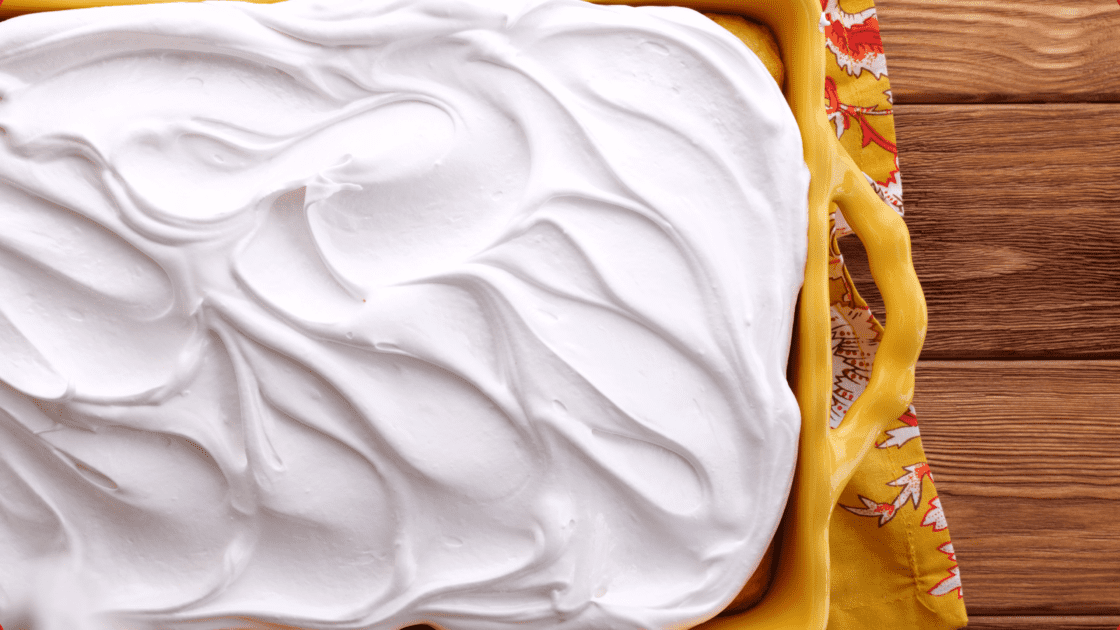 Oh my goodness, how light and fluffy does that look?

This icing is very stable and keeps well for up to a week on an icebox cake stored in the refrigerator. Enjoy!

What’s the difference between this frosting and Swiss meringue?

The main difference between these frostings is that Swiss meringue buttercream frosting is cooked but mixed off the heat. Meanwhile, this frosting is mixed as it cooks on the stovetop.

Note: You'll need two recipes of this icing to ice a layer cake. Fortunately, this recipe doubles beautifully, so there's no need to make two separate batches, just double it and make it all at once.

“Peoples s’posed to be nice. That’s just the way you do things.”

I have made fluffy white frosting my whole life first with a glass double boiler and with Betty Crocker’s mix. My birthday cake always had to be angelfood cake with fluffy white frosting a those hard candy letter/designs that you had to peel off a paper backing. I haven’t had this for a long time since I don’t have a double boiler (so expensive)and the Betty Crocker mix not being made. But now I can try your recipe I just want to know if this makes enough to frost an angelfood cake-I do love a lot of it–thanks

Hi Holly, will depend on how much you want. I would say make a batch and see if its enough, and if not, whip up another real quick.
I hope you love it!

I have no idea why others had problems. I’ve always been scared to death to try making 7 minute frosting. This turned out absolutely perfect!!! NO SUGAR GRANDULARS..And so easy. Easy clean up. I used duck eggs instead of chicken eggs.

I am a chef…but not a baker…in baking one has to follow directions exactly. So that being said. I have a few recommendations.

For the baker who said it browned in the pot…the burner was to hot.

And the baker who said it was to salty…I’ll bet she used the wrong measuring spoon. Instead of the 1 TSP (teaspoon) she used the 1 TBS (tablespoon).

I’ve attached a pic of my first try…thank you so much for posting. Marianne 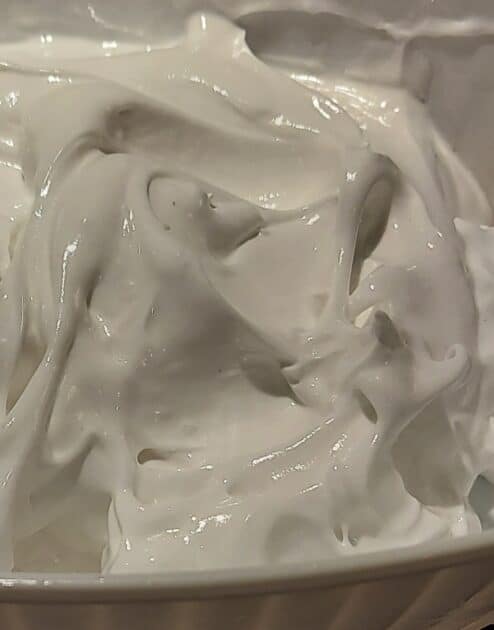 Have you ever used this recipe for piping around the cake?

Have you ever used your 7 minute frosting for piping a border on a cake. Thanks.

I read this and was amazed at how you cook it totally on the stove. I will definitely try this since I like a light frosting and my hubby loves marshmallow, so is a win win. I agree with some recipes must be followed to the tee and I will do just that. Will let you know how mine turns out, I think it will be perfect….

After feeling that I, too, was genetically unable to make 7 minute frosting, I made this today for a birthday cake, and it was fantastic! So, on my and my husband’s birthday, we had angel food cake, with a lemon curd filling, topped with your wonderful 7 minute frosting! Thank you so much for sharing this! I love the little bit of sugary crunch throughout, too. <3

Deb I am so happy to hear that! The angel food cake sounds amazing and it warms my heart to know that you successfully make the 7 minute frosting to top it off. I knew you could do it 😉
Thanks for letting me know about your experience. It made my day 🙂

Diana
Reply to  The SouthernPlate Staff

Just made 3 X this recipe for two large cakes. I tried it first with egg whites sold in a carton, but guess what? They heat the egg whites and they’re no good for a merengue or angelfood cake. Had to throw out a whole pot full of goo. Second time with real egg whites came out fine. I’m going to beat some whipped cream into it for the butterfat.

Is it frosting or icing down “South?” 🙂 Just kidding!