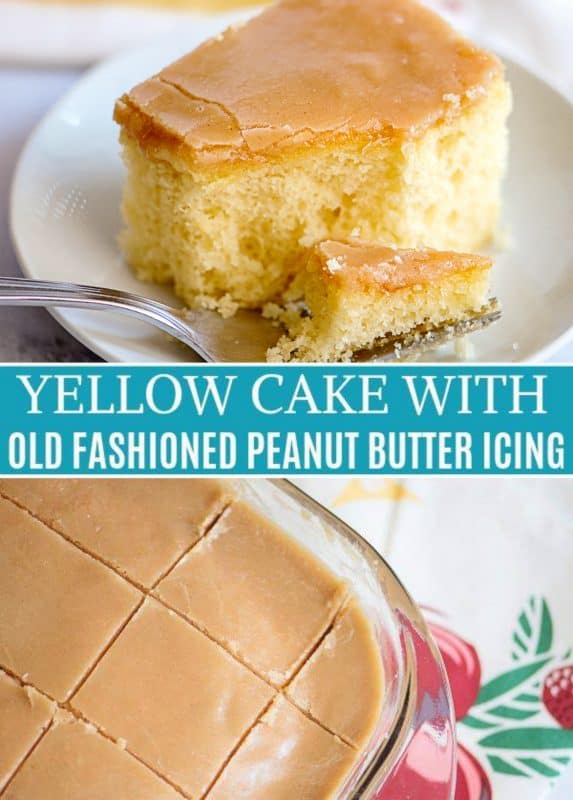 Today, I’m sharing a recipe with a big old root system behind it- Yellow Cake with Old Fashioned Peanut Butter Icing. The cake we’re going to use is just a boxed mix because, well it’s not the cake that is important here, it’s the icing – My Grandmother’s old fashioned peanut butter icing to be exact. This cake will forever me endeared to be for one reason, my great aunt Red.

Red was my great grandmother’s sister. Her given name was “Stella” but I took to calling her Red when I was just a girl due to her insisting that her hair be dyed red at all times. She used to come and stay with my Grandparent’s house often and I was pretty close to both her and my great grandmother, whom we all called simply by her name, “Lela”.

Red was a young one, having been born sixteen years after Lela in the modern year of 1918. Red and Lela were very close and I was their tag along. Whenever Red was visiting, my mother would always be sure to take me by there and let me to spend a day or two with the them. Their birthdays were one day apart and Mama even started checking me out of school so that I could go take them gifts and be there for cake on the day they both celebrated (my siblings still don’t know about this!).

Lela passed away in 1991, when I was seventeen. I didn’t get to see Red nearly as much after that. She got in a “bad way” as folks say it and wasn’t able to get out much. Six years went by. I did see her some, but her health was declining and her birthday was coming up.

She had a daughter in California who wanted to visit and it was silently understood that Red might not be with us too much longer. Her daughter wanted to make a big event out of her birthday, so she rented a banquet hall at a hotel and invited a large crowd for a grand celebration.

As Red’s daughter went about making plans for the party, she asked Red what kind of cake she wanted. She had planned on ordering a grand cake from one of the local bakeries to match the status of the nice banquet hall and fancy decorations she had planned. Red, with a defiant streak to match her hair color, stated plainly “Lucille makes my cake”. Her daughter apparently had missed the tradition which had grown over the years of my grandmother making Stella’s favorite cake for her birthday each year and Red growing ever fonder of it, looking forward to this fudgy peanut butter icing on her special day. So in the end, Red got her way.

I was going to college and living with my Grandmother at this time (Lucille, Lela’s daughter and Red’s niece). Granddaddy had just passed away so it was just Grandmama and myself living together as “roomies”.

The day of Red’s party arrived and I drove Grandmama the two hours to the hotel where the party was held. The two of us walked into this hotel lobby, to this fancy banquet hall with flowers and balloons, folks all dressed up and Red in the middle of it all looking pretty as a picture with a corsage her daughter had surprised her with.

Red was thrilled. It was just what she wanted.

These memories are so precious to me today. I was so blessed to get to spent the early years of my life surrounded by these wonderful people and these years of my life are so much richer as a result. Red, Lela, Grandaddy, and Grandmama may not be physically sitting around our tables like they used to, but they remain very much an important and very special part of my life. I always get a nice little tear duct cleaning thinking about them whenever I have a bite of this cake. 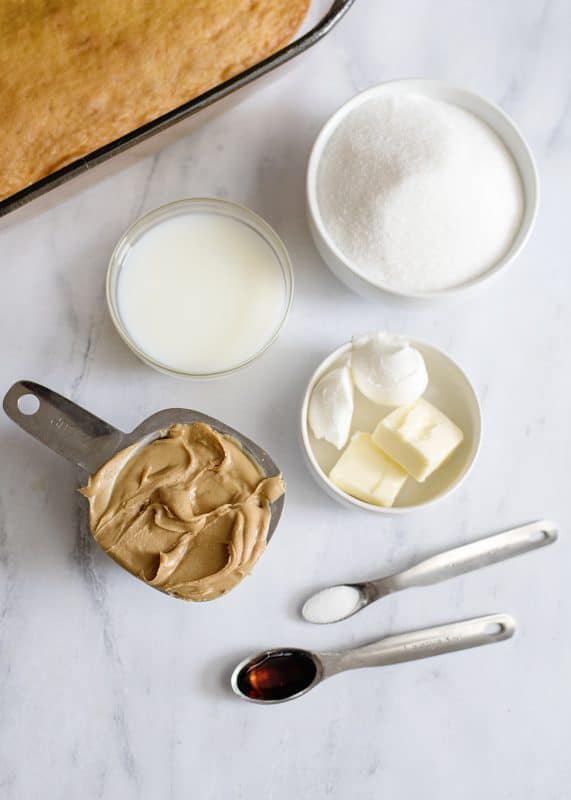 Tips for success with this recipe: 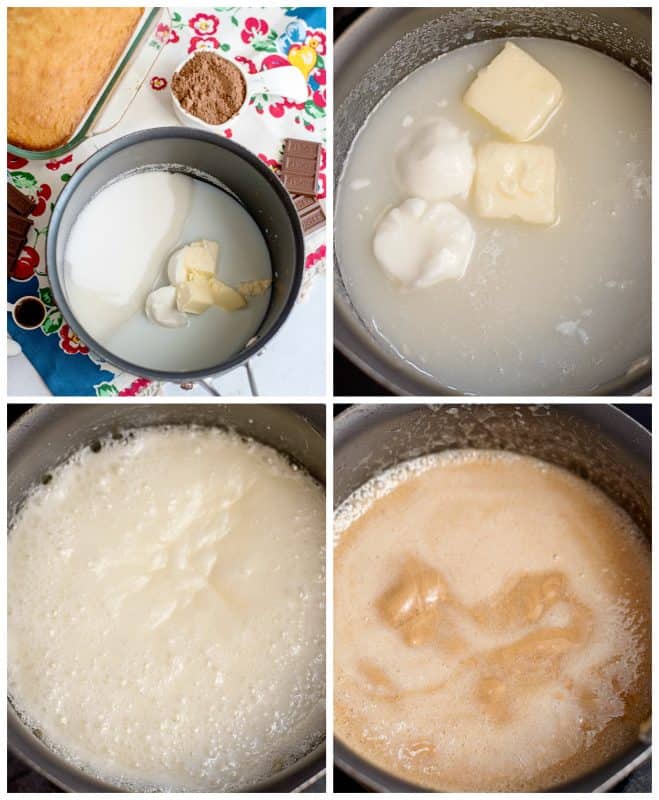 In a large sauce pot, combine sugar, milk, shortening, margarine, and salt. Bring to a rolling boil over medium high heat, stirring constantly to prevent scorching. Once it reaches a boil, let boil for two to three minutes without stirring. Remove from heat and immediately stir in vanilla and peanut butter. Beat until icing is smooth and starts to lose it’s shine. 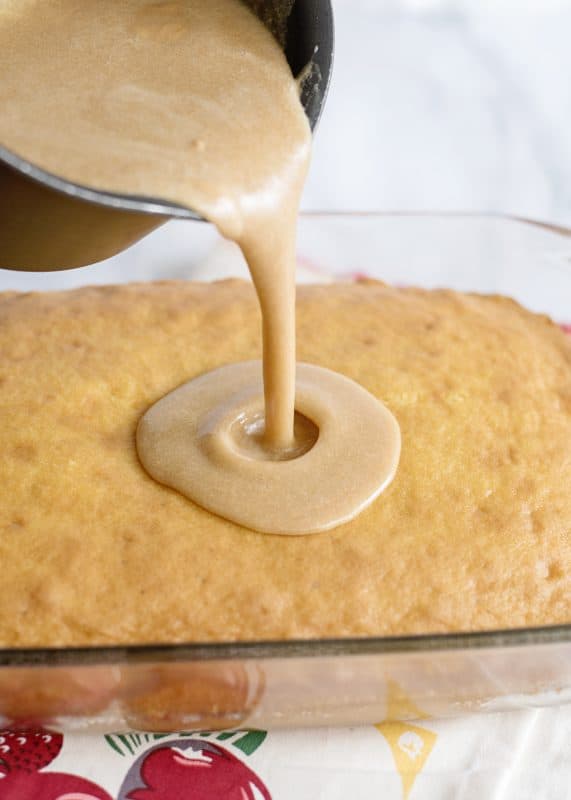 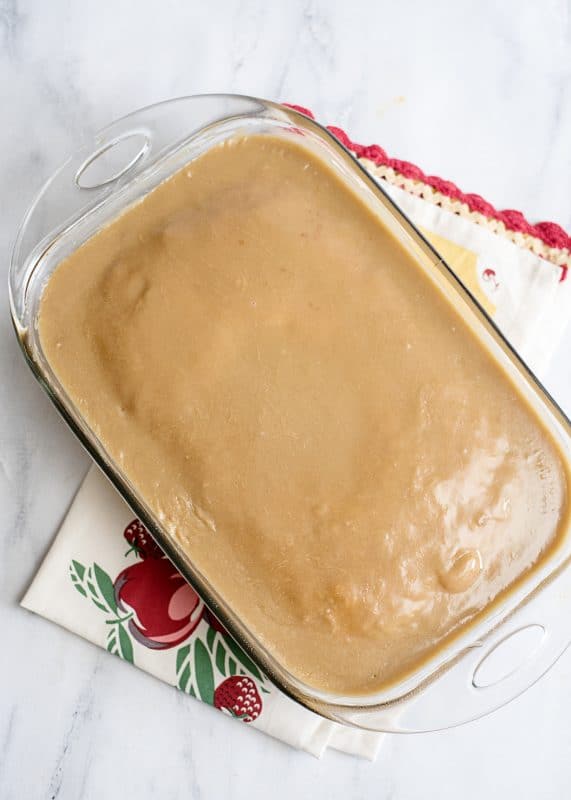 Allow to cool before serving. 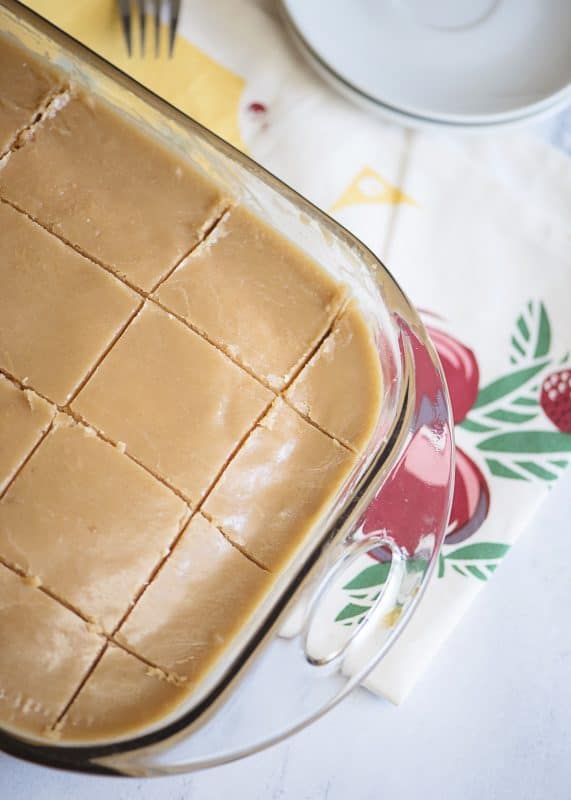 Can you see why Yellow Cake with Old Fashioned Peanut Butter Icing is such a special cake? 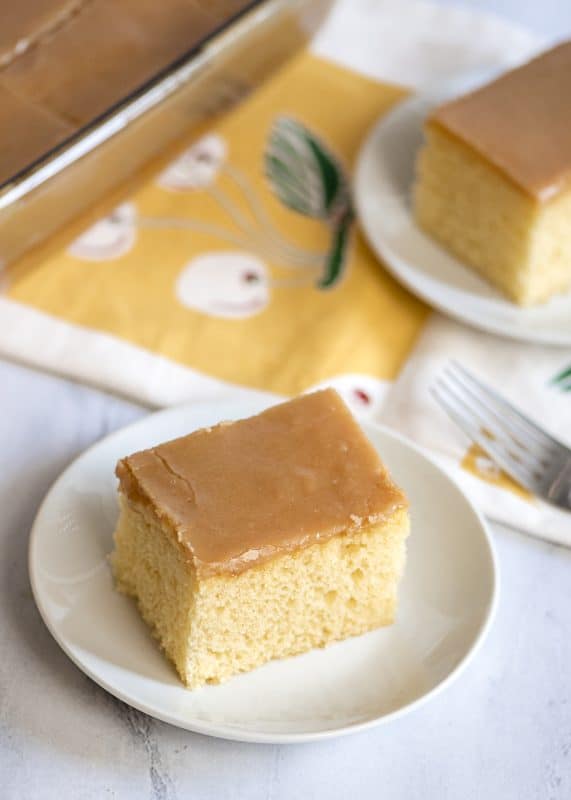 This is a sight to behold. Guess what? It seems like it was a gift from above, but as a precious reminder of my past and their connection to the future – this is my daughter’s favorite cake. 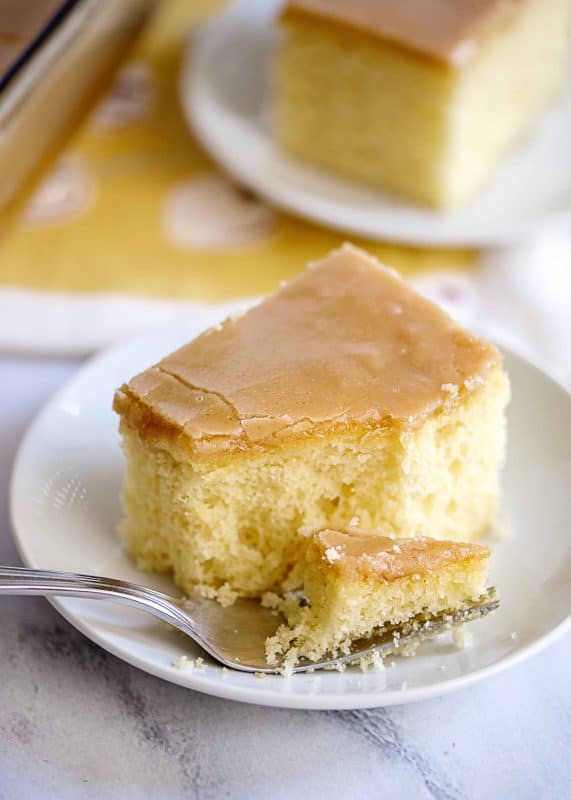 Red’s birthday has already passed but, Happy Belated Birthday, Red. I look forward to spending it with all of you again someday. 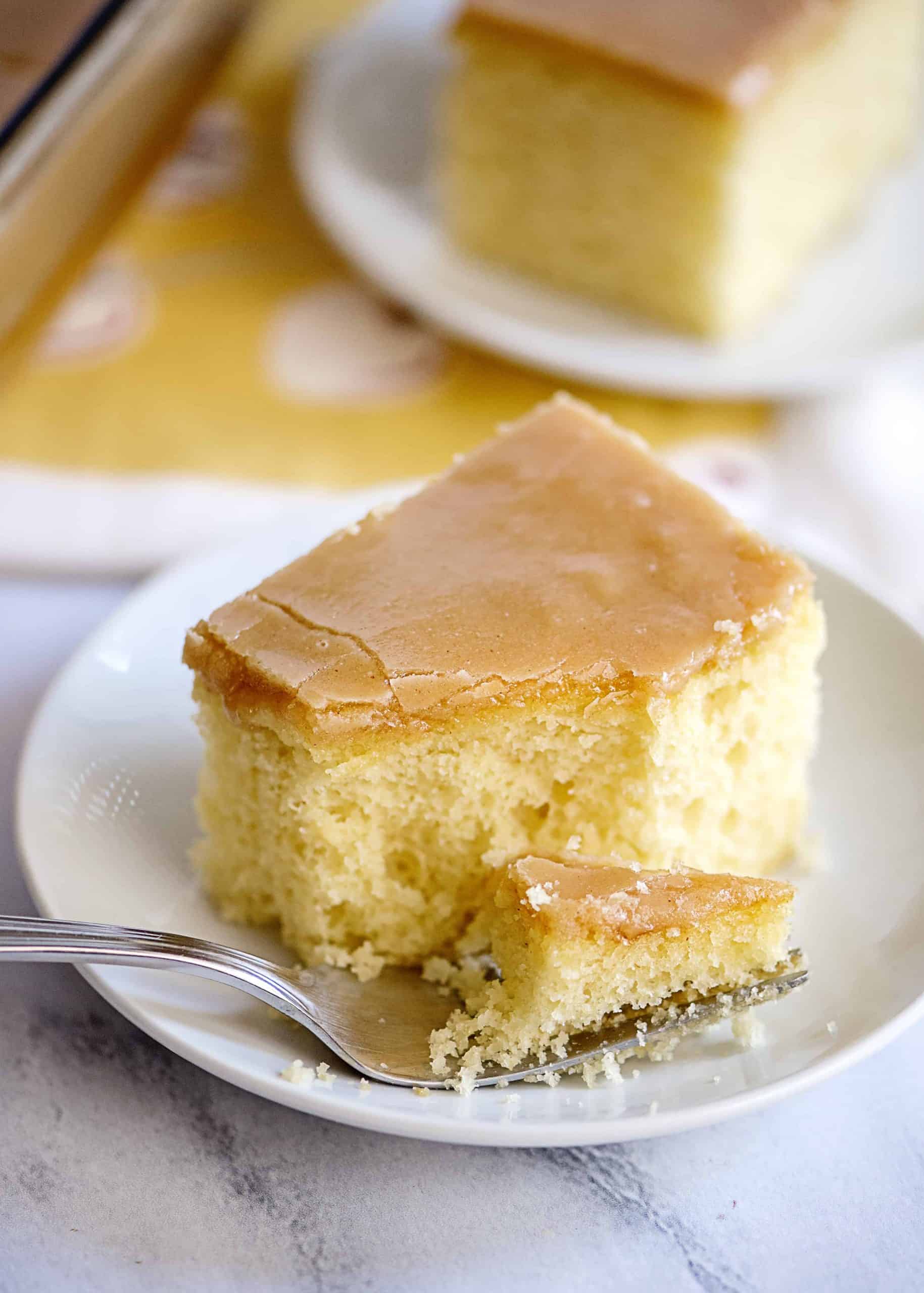 This post was originally published in July of 2008. I updated the photos in August 2019. 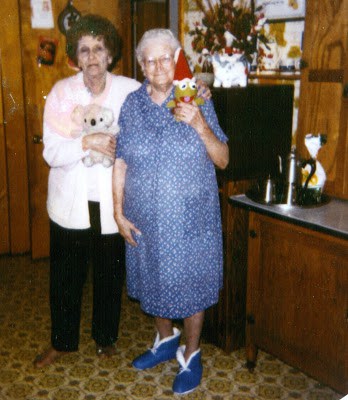 Stella “Red” and Lela, 1988
My Great Aunt and Great Grandmother 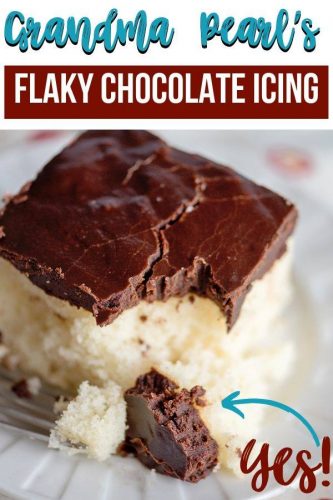 Click here to see the chocolate version of this icing!

< Previous Post
How long does it take to read each book in the Bible?
Next Post >
The true story of the Good Samaritan