Home » Recipes » Beat The Chefs Q&A and behind the scenes Things to Watch For! 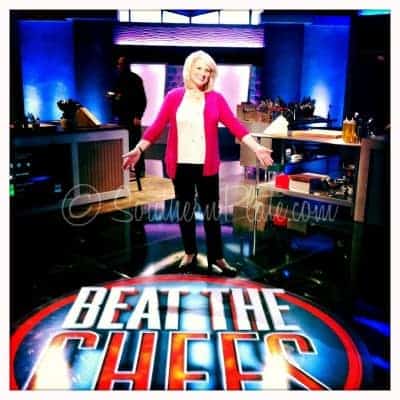 I had a BALL filming Beat The Chefs for GSN and I’ve had a lot of fun watching the show with y’all while we chat live each week on Facebook.

I thought I’d compile a post of fun things to look for and frequently asked questions so we can all enjoy knowing the behind the scenes details!

Fun Things to Watch for:

I love interesting little behind the scenes tidbits so I thought I’d share some fun things to look for. Come back next week because as I think of more things I’ll add them in!

When I got there and saw that there was a child’s painting on the fridge as part of the set, I had my husband fedex me some of our kid’s pictures! The initial picture was just going to be in every show, but the art department accepted my pictures and in three (maybe four) of the shows there will be paintings that Katy Rose did on the fridge. Tonight’s painting is a self portrait she did this summer.

Bird Loose In The Kitchen –

I honestly can’t remember which show it was but during the dramatic reveal at the end of one show, a bird got in the studio and headed straight for the home cook’s kitchen. While they were waiting to see if they won and being interviewed after, this sparrow was hopping all over the place, playing in the sink, hopping and eating on the countertops, etc. I’m not sure if it is possible to cut it out in editing because it was having a grand time so pay close attention behind the home cooks during the reveals this season!

Normally, the judges shoes are not an issue because you never see them! So most of our guest judges just wore what was comfy for sitting behind the table. I’m wearing heels when I walk about but beneath the table I had a nice pair of flip flops 🙂 In one episode, though, our guest celebrity judge had to get up during the show and go in front of the cameras -and she didn’t have any shoes other than flip flops with her! They sent someone out to get a pair really quick and came back with some really nice shoes, two sizes too big. So watch for a celebrity judge in really big shoes. You can’t miss it – if you’re looking!

Usually kids aren’t in the audience because it is a pretty long day and just too much to ask of them. During one show, though, Matt Rogers’ wonderful wife came to visit the set with their two boys and they sat in the audience a while right behind me. I’m not sure if they made it on camera but if you watch really close you might catch a glimpse of the little Mini-Matts!

Brad Johnson has the most fascinating collection of socks I’ve ever seen. He was the only judge who couldn’t wear comfy shoes because his show on camera from time to time. Keep an eye out for his socks. I have no idea where he gets them from but I am jealous. Striped, polka dotted, patterned, you name it!

Where in the world is Matt Rogers?

When you see us eating at the judges table and Matt is off camera – he was really in the kitchens while the cameras were on us scavenging for leftovers. He then pretends to be coming back on set from backstage but now you know the truth 🙂

Every Single Person In TEARS –

There is one show this season that had every one of us in tears. I was trying to hold it together so I looked at Brad, because he usually has his emotions in check fairly well and I can straighten up a bit when I look over at him. This time, though, he was sniffing and bawling….so I thought “Oh no, I can’t do this!” Then I looked to Matt, who was also bawling. Then I looked to the audience…there literally wasn’t a dry eye in the house. I managed to keep myself somewhat together, cried of course, but once the show wrapped I made a beeline for my dressing room and had a good tear duct cleaning!

Join me each week on my Facebook page where I’ll have a question and answer thread. I’ll be chatting with you during the show and you can chat right back! Here are a few questions from last week’s premiere of the show.

Now On To The Frequently Asked Questions!

Do they really cook as long as the clock says?

This was the most common question asked and the answer is: Yes, absolutely. When the clock says 2 hours or an hour and 45 minutes or whatever, they start a clock in studio and we all sit there while they cook for every single minute of that time. There is no kitchen magic or do-overs.

It passes by a lot quicker than you’d imagine though, because we’re watching the cooks and chefs, trying to listen in on their conversation to figure out how it is going, and talking among ourselves. We spend a lot of time at the judges table tossing around guesses of what everyone is doing in the kitchen! Keep in mind, we don’t have nearly as good a view as you do at home, we’re a good ways back and we’re not allowed to get up and go check out the kitchens.

Do the Chefs spend time with the contestants off set?

How many episodes did you tape?

We taped eight episodes over a period of two weeks.

Will GSN publish any of the recipes?

They plan on publishing each show’s recipes directly following the airing. There were some kinks last week but hopefully they are worked out now. Here is the direct link to the recipes.
Note: Only the Home Cook’s recipes will be posted. Since the Chef’s were cooking and developing their dishes on the fly, there aren’t any actual recipes for them.

How long does it take to shoot each episode?

It takes anywhere from 10-14 hours to film a single episode :)That is all shot in one day, with a single break for lunch.

Are you from Huntsville??

When I read your blog you speak to me in a higher voice!

I’ve always hated the sound of my voice so I would consider it a great personal favor if you could just keep imagining it however it sounded in your head before you actually heard it. Has to be an improvement 🙂

How many shows did you record with you being the judge?

I’m one of two permanent judges so I’m on every episode.

Do they play that VERY ! dramatic music while you’re taping or is that in post?

There wasn’t any music while we were filming and I REALLY love the music they added in! There were all of those lights though. When you sit in that all day long, hardly seeing sunlight…I’ve never been to Las Vegas or anything but I kinda feel like I know what that is like now 🙂

Did you have to sit there the whole time?

Did they run out of Diet Dr. Pepper ?

They didn’t have any at all the first day but I prefer to plan ahead rather than expecting people to accommodate me so I showed up with five twelve packs in my trunk for good measure 🙂 After the first day, they got some on set and whenever they ran out (Turns out a lot of other people love it as much as I do!) I just went to my trunk and brought in more. Matt Rogers was a big help in making sure I had some on set, too! Have y’all seen this commercial he did? ~giggles~
Please note: I have deleted this video that I filmed in order to prevent my youtube account from being closed after GSN reported it to Youtube as copyright infringement.

What channel on knology is it?

Knology doesn’t offer GSN. Trust me, I’ve asked, begged, pleaded. I have no idea why. I have no problem with them not offering GSN if they don’t want to but they also pay off the city I live in so that they won’t allow another cable company in. That’s not very nice. 🙂

Can I watch the show online?

Not that I know of but if you find a way please let me know!

What do the home cooks win if they beat the chefs?

Each show there are two home teams and each one is eligible for $25,000.00 if they beat the chefs, so $50,000.00 is up for grabs each show. If the Chefs win, they just win, no money or anything. But I’ll share a diet dr pepper with them if they want 🙂 Oh wait, I’m not allowed to talk to them..okay they’re on their own.

Do the contestants have to cook a whole meal?

You know, I’m not sure if that was required but I do know that each team did cook a full meal. Except for dessert. Not once did we ever get dessert ~sniff~ . I think we need a special Dessert round!

Did you ever cringe with anything you had to taste?

I won’t tell you when but one time during this whole season, yes.

Yup! It made me nervous as a cat having to watch when that happened.

Please note: I have deleted these videos that I filmed with my camera on the set in order to prevent my youtube account from being closed after GSN reported it to Youtube as copyright infringement.

Chefs Dancing on the set of Beat The Chefs

A lot of time the audience got in on the fun when we were waiting to film certain segments.

This guy came out of the audience and started singing and we actually held resuming filming so he could finish his song. He was awesome!

Crew guys singing “My Girl” on the set

Christy – What happened to the show? I can’t find it on the GSN schedule.

hi christy! as one of the contestants on the show i have to say thank you so much for posting all of these videos and pictures. we don’t have cable in our house so its fun to see the set and everyone!!

haha! I know what made Christy cringe……but I ain’t telling!

I loved the school kitchen ladies and the pork ladies, and was so glad the school ladies won. The recipe looked really good! Sounded like at least two of you liked it too. Great show and I enjoy watching Jeff Foxworthy’s show just before. You are great on your show!

Okay Christy, is the singer from the audience, married???..if not, here I am…signed sealed and delivered….smile

LOL! I don’t know Vonnie but I am pretty sure he was there by himself. If I can track him down and hook you two up I get to come to the wedding, right????

Vonnie
Reply to  The SouthernPlate Staff

But of course! We’ll probably use all of your recipes at the reception…LOL!