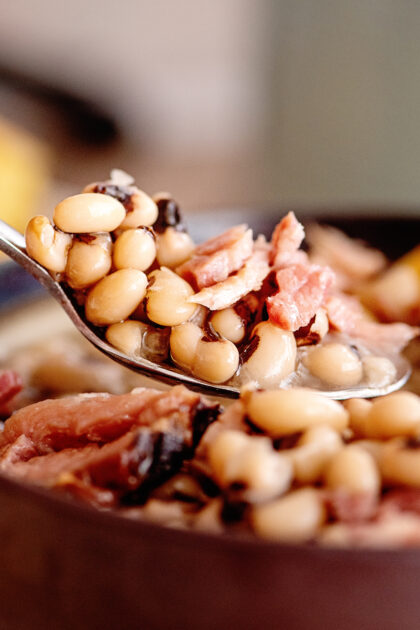 If you’re planning on having a traditional Southern New Year’s Day dinner, go get your black-eyed peas now before they sell out! I mentioned this on the Southern Plate Family page and some readers are already reporting not being able to find any. While you’re at it, pick up some collards or turnip greens, and don’t forget the ham hocks and fatback!

The following is from my Hoppin John tutorial but I wanted to tell it again with the black-eyed peas in case anyone didn’t know why Southerners eat what we do on New Year’s Day.

New Year’s Day hosts the most important meal of the entire year for Southerners. Deeply rooted in tradition, superstition, and hope for the future, we have definite must-have dishes which even those of us who might not be as superstitious as others dare not shirk on this day.

I’ve told this story before, but it certainly bears repeating in reference to this meal. Back in the days of the Civil War, Union troops swept through the south, confiscating crops and livestock to use as provisions for their troops. Southerners who weren’t off fighting were left with precious little, save for peas and greens. You see, Union soldiers considered “field peas” and greens to be fit only for animal fodder. These dishes became cherished and appreciated as what saved many a family from starvation during those times and the tradition of celebrating these dishes on the new year was born.

There are three things every Southerner must eat on New Year’s Day: black-eyed peas, greens, and hog jowl or fatback. Black-eyed peas bring luck in the coming year, with many traditions holding that you must eat at least 365 of them. The more you eat, the more luck you’ll have, so Mama always makes plenty!

Fatback is very tough and extremely salty. It looks just like a thick slice of bacon but is more difficult to chew. As one of the cheapest cuts of meat, it rose rapidly in popularity during the Depression era. Eating this ensures good health in the coming year and I must say, it is delicious.

Greens can be either turnip, collard, or a mix of greens (a “mess” as we call them). They bring wealth in the New Year and as with black-eyed peas, the amount of wealth you have is directly proportionate to how much you eat! To see my greens tutorial (I just love the pepper sauce recipe), click here. Here’s a quick recipe for Southern turnip greens too.

Now you know the tradition, let’s talk about how to serve black-eyed peas. The most popular way is Hoppin John, which is black-eyed peas, the pork of your choice, and seasonings. I’ve shared a vegetarian option before, but today we’re focusing on black-eyed peas and ham.

All you need is dried peas, pork, salt, pepper, oil, and sugar. Soak the peas overnight, and then simmer them along with these other ingredients for the most tender and flavorful main dish to serve this New Year’s Day. Add a mess on the side and you’re good to go! Happy eating! 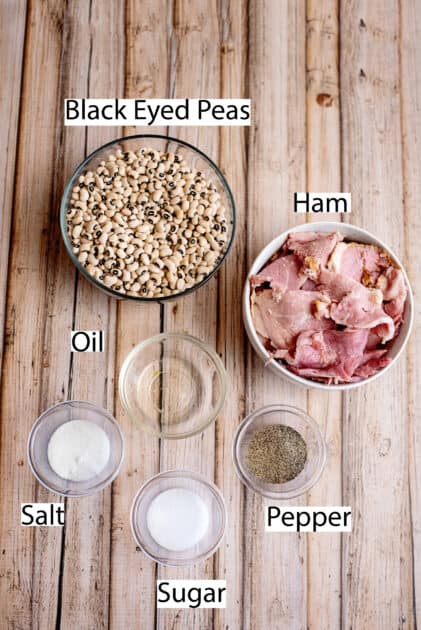 How to Make Black Eyed Peas and Ham 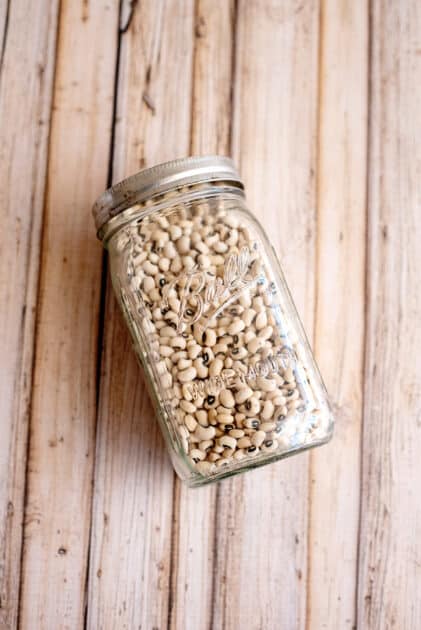 Firstly, I wanted to give you a tip! Store your dried peas in large mason jars rather than the bags they come in. This keeps little critters out of your peas! 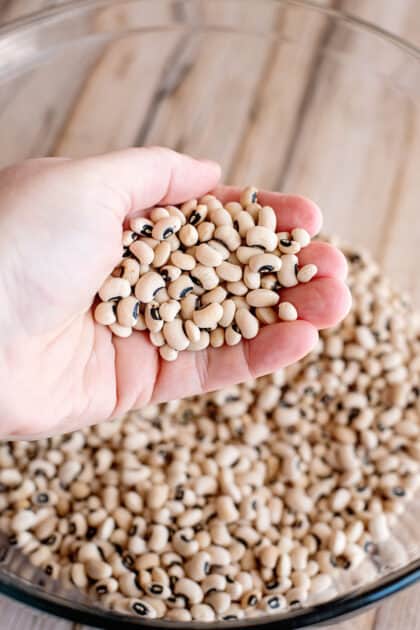 Sort your dried beans into a large bowl.

Sometimes, little stones end up being packaged with beans. This is just an unavoidable aspect of bean farming and is no big deal. What you do to avoid cooking up those stones with your beans (and possibly breaking a guest’s tooth) is to pour out a handful at a time into your palm and look through them before dumping them into a bowl. 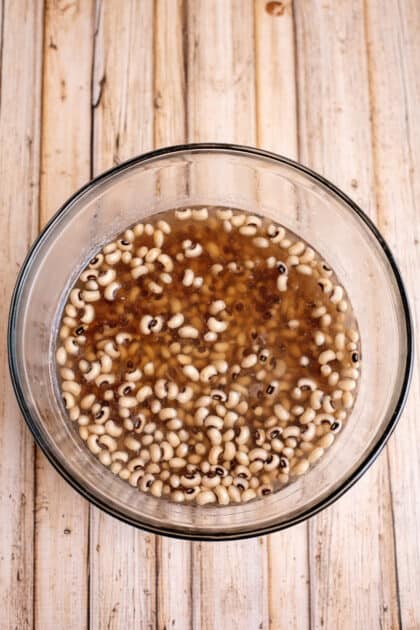 Now we have to soak our peas.

I prefer the overnight soak method. However, if you would rather, you can simply cover your peas with water, bring them to a boil, then remove them from heat, cover them, and let them soak for one hour. Pour out the soaked water and replace it with fresh water to cook the peas until done.

Having said that, I still prefer the overnight soak method, which is what we’re doing here.

Before going to bed, cover the peas with water, leaving plenty of extra because they will absorb the liquid and expand. 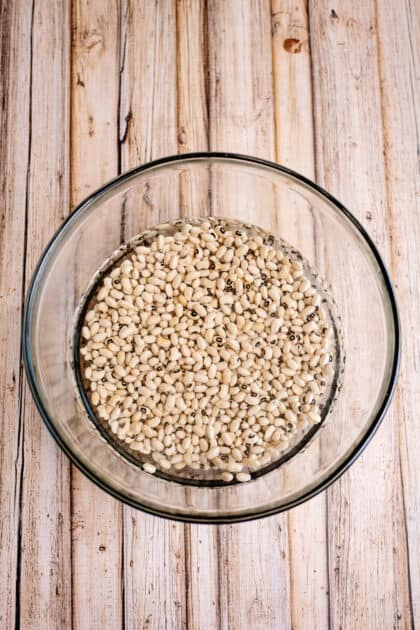 See how much they expanded overnight? Now pour out this water… 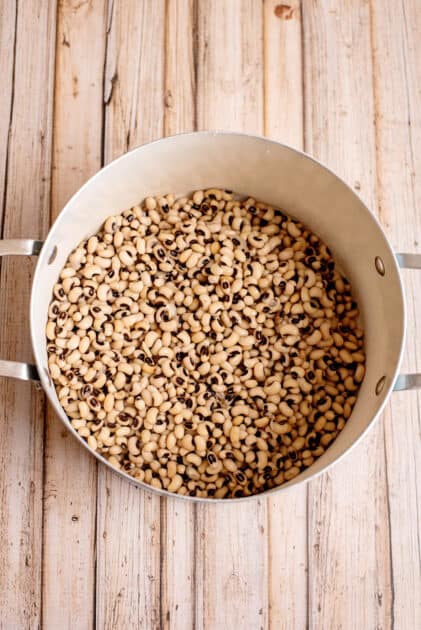 And place the drained peas in a large pot. 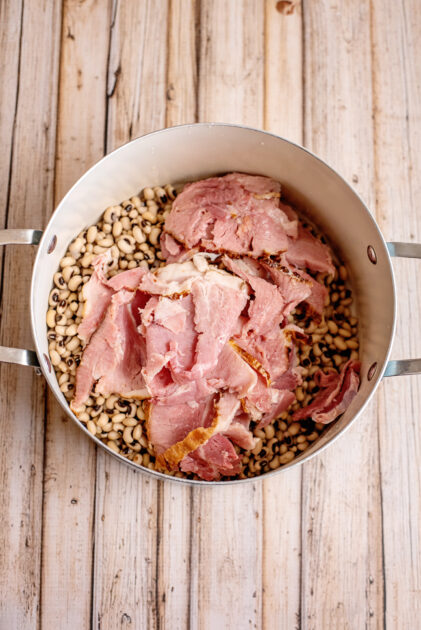 Add some type of pork for seasoning. 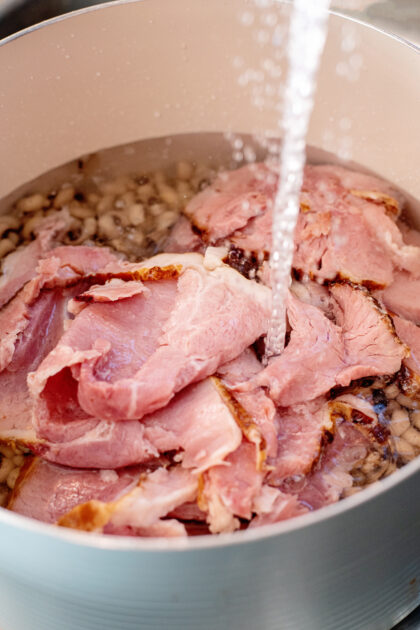 Fill the pot with water.

Make sure you cover them well because they will boil down over the course of the day and you don’t want your beans to go dry.

Another way of doing this is to cook the beans the exact same way in the slow cooker. With the lid on, you won’t have to worry about it boiling dry during the day or check on it like you do the pot. 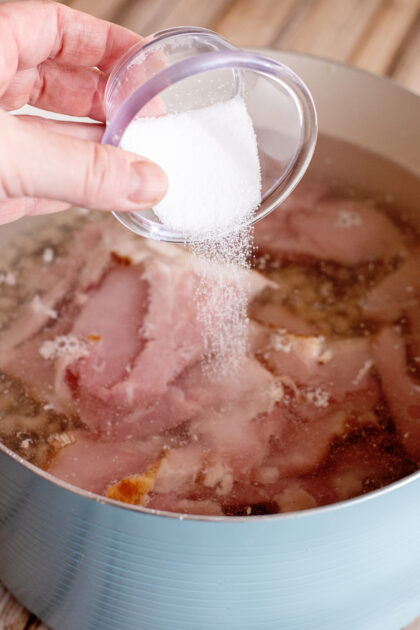 Now we add our seasoning.

To read about how I learned to season beans, check out this post on pinto beans.

Note: you’ll definitely need to add more salt so be sure and taste it after a few hours of cooking. 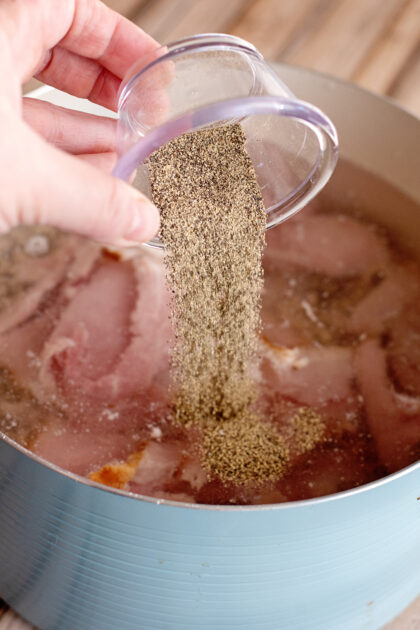 A tablespoon of pepper… 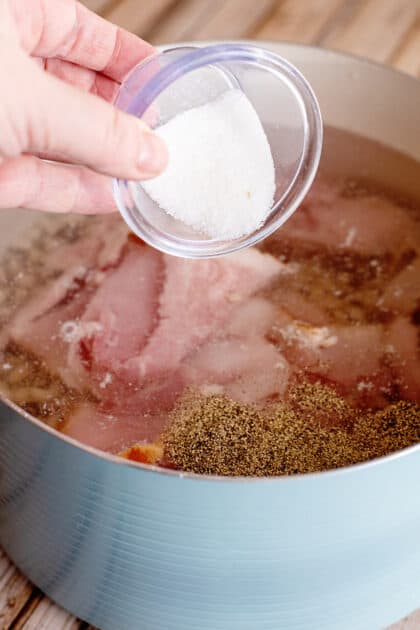 A tablespoon of sugar… 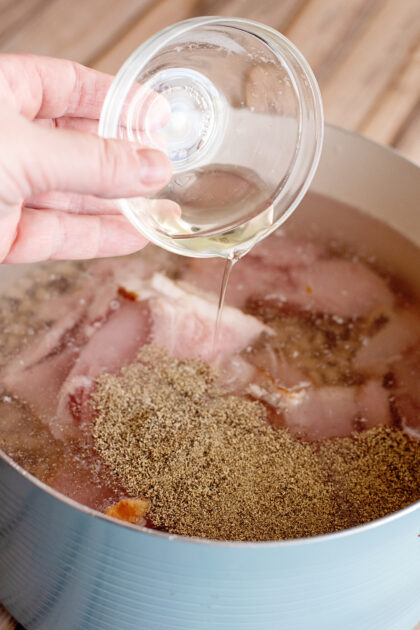 And a tablespoon of oil. 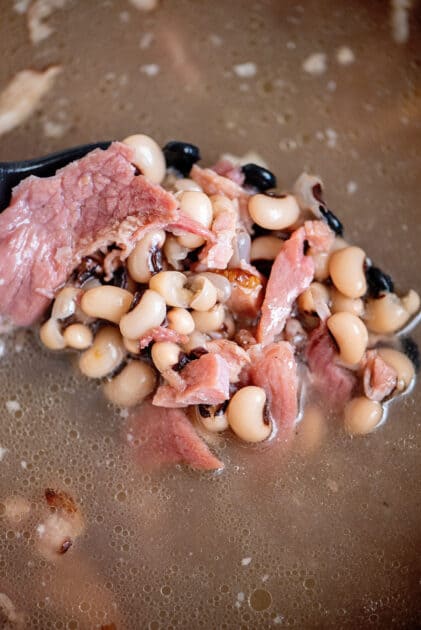 Bring that to a boil and then reduce heat and simmer, uncovered, for a few hours. 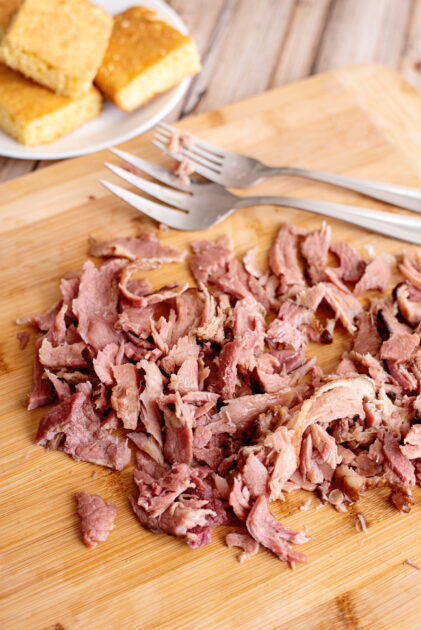 Remove ham, hambone, or ham hock, and shred it. 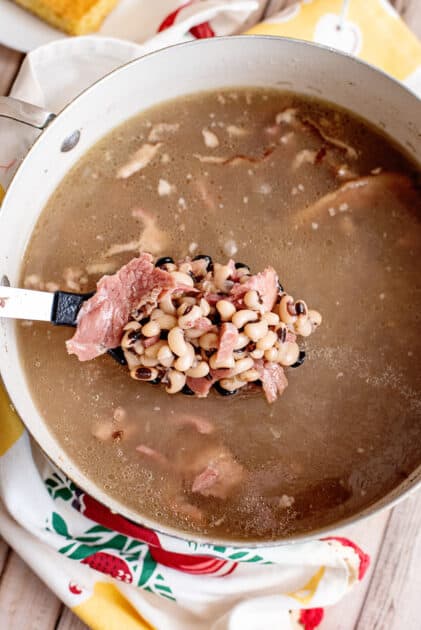 Return shredded ham to the pot and stir. Taste to see what seasonings you want to add more of.

Add more salt whether you think it needs it or not because it does, I promise. 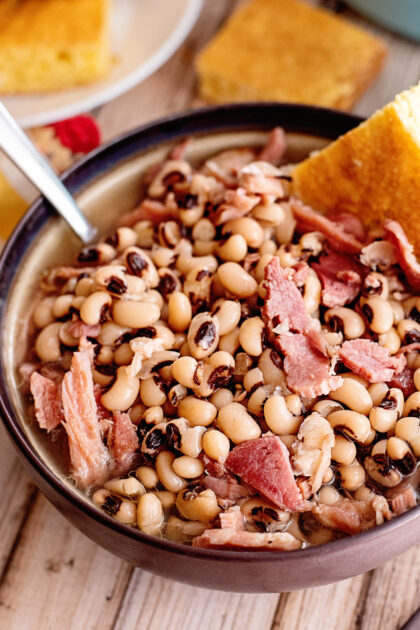 Pour a little of the juice over your cornbread or onto your plate to sop up with your cornbread because this is delicious! The juice is known as “potlikker” or “pot liquor” by the fancy folks. 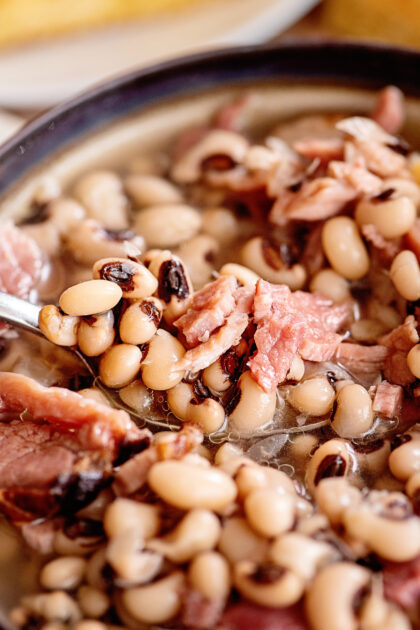 Store leftovers in an airtight container in the fridge for up to 4 days and in the freezer for up to 3 months. Reheat in the microwave or on the stovetop.

Want to add more seasoning? Here are some suggestions:

Why soak black-eyed peas before cooking?

We soak the peas because it means they cook fast and makes them easier to digest.

What other meat works in Hoppin John?

Besides ham, here are some other meat ideas to pair with your black-eyed peas:

Can I use other types of beans instead of black-eyed peas?

Yes, you can use pinto beans, black beans, cannellini beans, or great northern beans if you like.

How do you make black eyed peas with ham in the slow cooker?

For crockpot black-eyed peas and ham, just follow the directions, but instead of adding the ingredients and water to a large pot, we’re going to place them all in a slow cooker. Cook on high for 3 hours or on low for 6 hours.

How do you serve black eyed peas and ham?

The traditional way to serve this main dish is with a side of cornbread and a mess of greens. You find recipes for cornbread, turnip greens, and collard greens below. To make it even more filling, serve it with cauliflower rice, brown rice, or quinoa.

A recap of New Year recipes:

How To Cook Collard Greens With Hot Pepper Sauce

How To Make Hot Water Cornbread 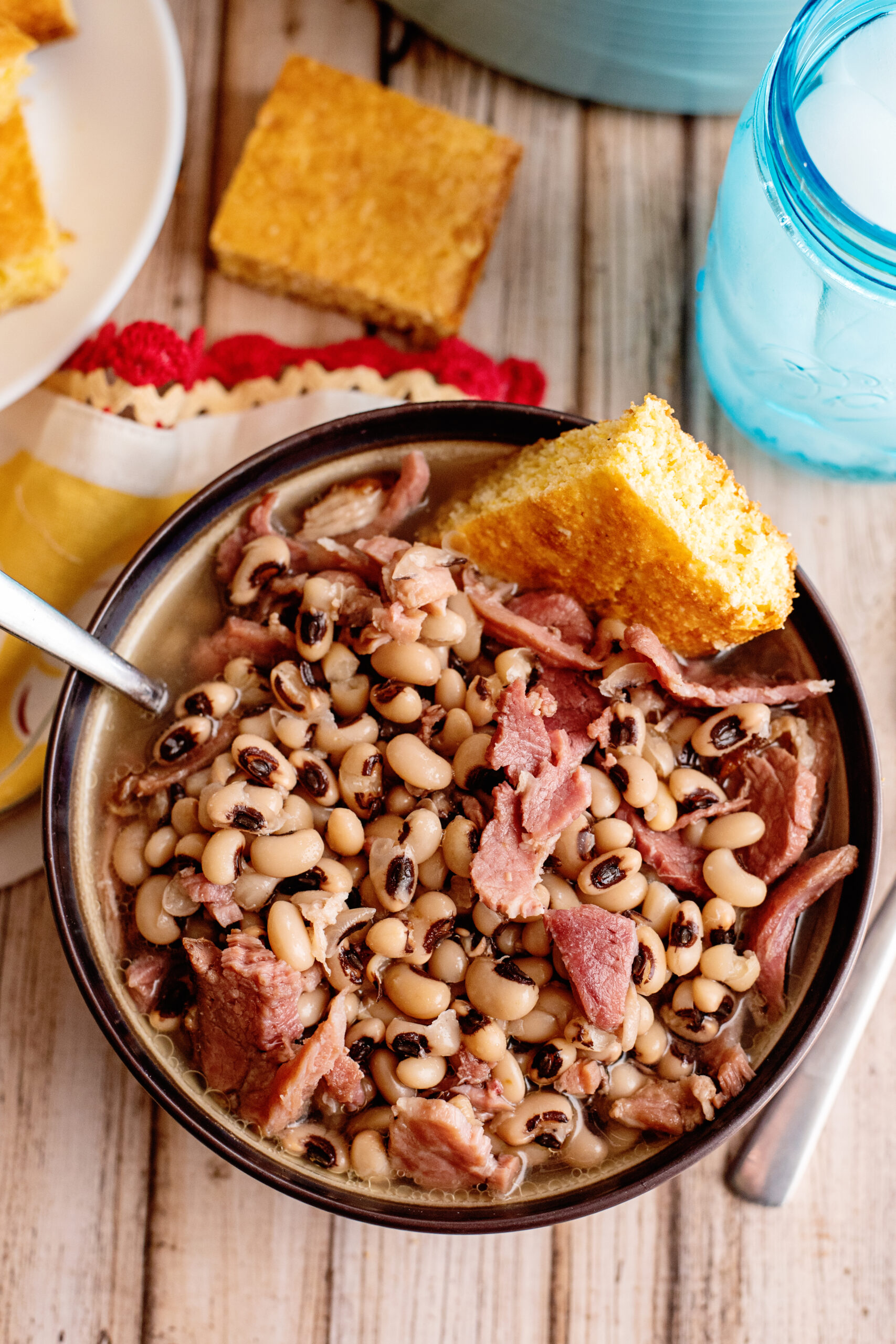 The remarkable thing is we have a choice every day regarding the attitude we will embrace for that day. I am convinced that life is 10% what happens to me and 90% how I react to it. And so it is with you… we are in charge of our attitudes.”

Excellent recipe, I look forward to this meal all year long. It used to take all day to make the peas and greens in traditional southern fashion. But now, I cook both in my instant pots. It’s a game changer for dried beans and peas. Happy New Year

Thank you so much for the kind words Kimberly. Truly means a lot! Happy New Year to you too 🙂

I make this recipe every year with the bone from my Christmas ham. Thank you for sharing it with us. I also enjoy knowing the background of the tradition.

I am so glad you like it Leslie!! I always find it interesting to hear how some of our traditions came to be 🙂

Is the measurement for a Tablespoon of pepper a misprint.

No ma’am. You’re adding it to an awful lot of water so it needs a good bit of seasoning.

Thank you so much for this recipe. I just tried it for the first time, also my first time starting with dry beans, lol and it is delicious. My hubby loves it and my kids did too which is a huge win! Fabulous and super easy recipes for our New Years meal! I had bought seasoned canned black eyed peas just in case I flopped on the recipe. Looks like the cans will have to take a back seat