Learn about the Southern New Year’s Day tradition involving black eyed peas and then enjoy them in my flavorful and hearty vegetarian Hoppin John recipe. 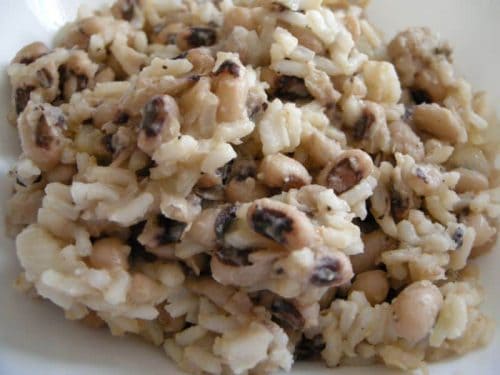 New Year’s Day hosts the most important meal of the entire year for Southerners. Deeply rooted in tradition, superstition, and hope for the future, we have definite must-have dishes, which even those of us who might not be as superstitious as others dare not shirk on this day.

I’ve told this story before, but it certainly bears repeating in reference to this meal. Back in the days of civil war, Union troops swept through the south, confiscating crops and livestock to use as provisions for their troops. Southerners who weren’t off fighting were left with precious little, save for peas and greens. You see, Union soldiers considered “field peas” and greens to be fit only for animal fodder. These dishes became cherished and appreciated as what saved many a family from starvation during those times and the tradition of celebrating these dishes on the new year was born.

There are three things every southerner must eat on New Year’s Day: black eyed peas, greens, and hog jowl or fastback. Black eyed peas are said to bring luck in the coming year, with many traditions holding that you must eat at least 365 of them. We never had a number, but the more you ate, the more luck you were supposed to have so Mama always makes plenty!

Hog jowl is very tough and extremely salty. It looks just like a thick slice of bacon but is more difficult to chew. As one of the cheapest cuts of meat, it rose rapidly in popularity during the depression era of the South. Eating this is said to ensure good health in the coming year and I must say, it is delicious.

Greens can be either turnip, collard, or a mix of greens or a “mess” as we call them. They are said to bring wealth in the new year and as with black eyed peas, the amount of wealth you have is directly proportionate to how much of them you eat! Tomorrow, I’m bringing you a greens tutorial.

Now you know more about our Southern tradition, it’s time to get cooking! I’ve got two recipes for you today. First, I’ll show you how to make delicious cooked black eyed peas. Then we’ll take that recipe and use it to create a vegetarian Hoppin John dish.

Hoppin’ John has been around for ages in the south as well. Classic soul food, it was yet another way to piece meager rations together and make a filling and nutritious meal. It is believed to have originated in African cuisine and carried over to the states, where it was eventually adopted as a southern staple. Flavored with crushed red pepper, vegetable broth, garlic, and onion powder, it’s a hearty and comforting meal that’s guaranteed to warm you up in the cooler months.

How to Make Black Eyed Peas 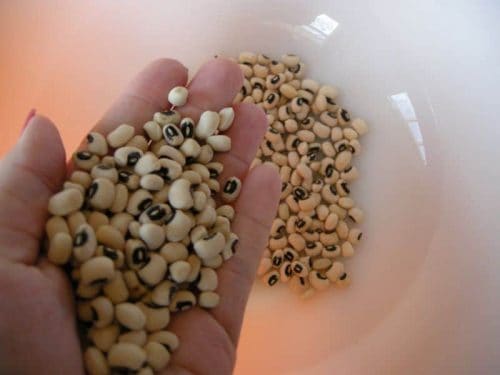 Just as I did with my pinto beans, you need to sort through your beans. Sometimes there are little stones in there, so you want to just pour them into your hand before you put them in the bowl and check a handful at a time. 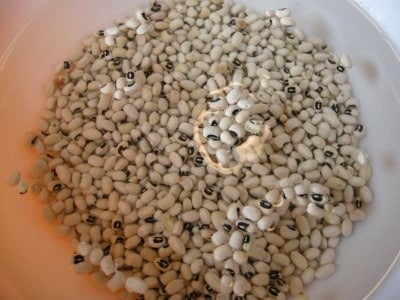 After they are all in a large bowl, cover them with water and then about two inches. These will need to soak overnight. 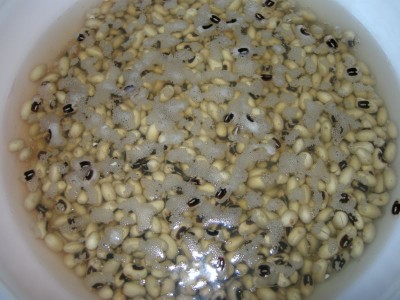 This is how they look the next morning. Drain off this water and discard it, then place peas in a large pot. 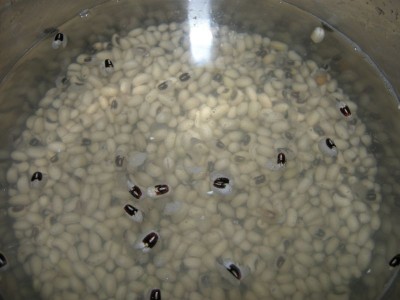 Add an ample amount of water so that they don’t cook down.

We’re going to cook these for a few hours at least. You can let them simmer all day if you like. 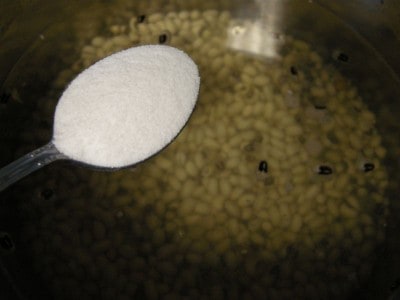 Now we need to season our peas. Normally for the non-vegetarian version, I would put in a ham hock or a large piece of country ham, maybe even a ham bone with a little meat left on it.

For this tutorial, though, I am leaving that out in order to make this a vegetarian dish.

So instead, we are going to add one tablespoon of sugar. 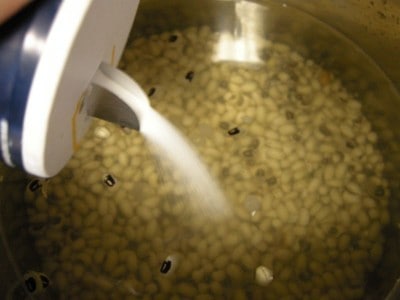 And about a tablespoon and a half of salt.

I prefer two tablespoons but I am giving you this measurement as a rule of thumb. When salting beans, it really needs to be to your taste. Start with a tablespoon and a half and taste them when they are close to being done, adding more if you prefer. 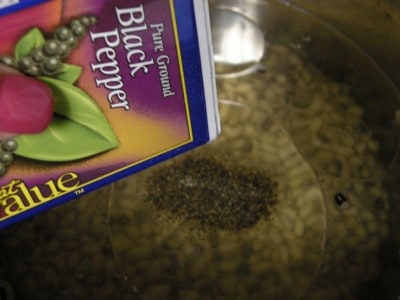 Add about a tablespoon of pepper. 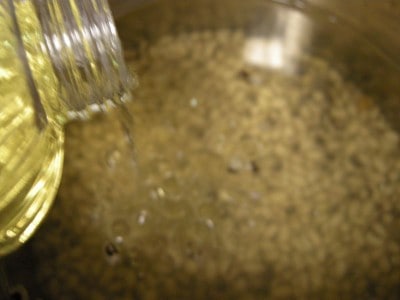 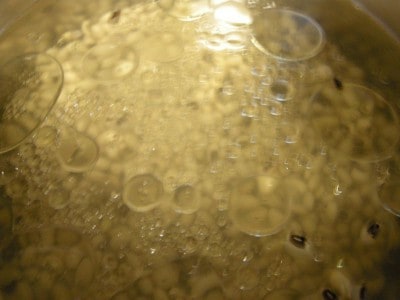 Stir that up and turn on the stovetop and bring it to a boil. Then reduce heat and simmer for two to three hours (or more if you like). When the peas are tender, they are done!

You can now serve them as is, straining out your peas into a serving bowl.

If you are going to serve them like this, I really suggest you put a piece of ham in them at the start and then shred it up into them before serving (unless you are vegetarian. In that case, I really recommend you don’t do that). 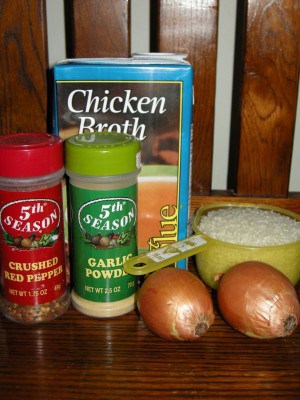 How to Make Vegetarian Hoppin John 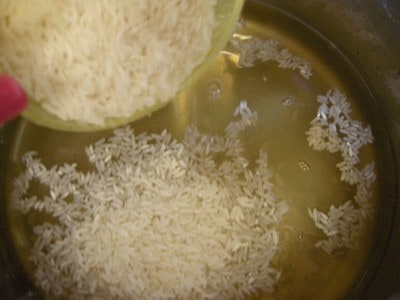 Place two cups of vegetable broth in a saucepot and add rice.

I seldom keep chicken broth on hand but happened to have it this time. Normally, I keep bouillon cubes in my pantry and just make my own broth using one cube per cup of water. Alright, I usually add an additional cube to make it richer. That’s just me. You do you! 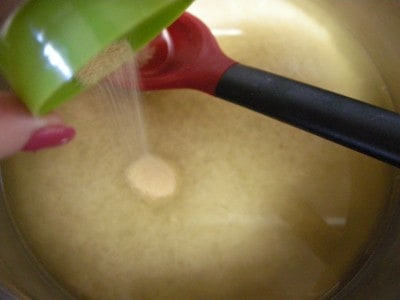 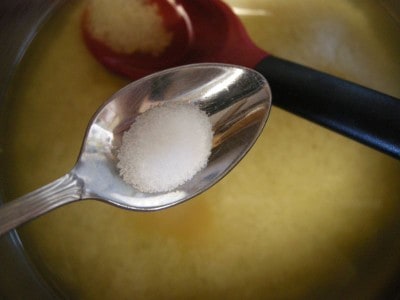 Bring this to a boil, then reduce heat and cover, simmering until the rice is tender and absorbs all the broth. 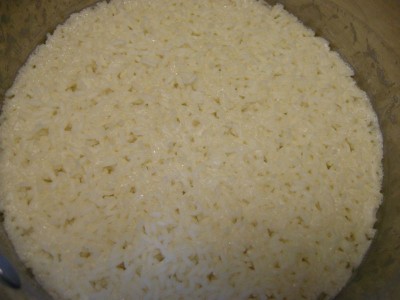 This is your finished rice. 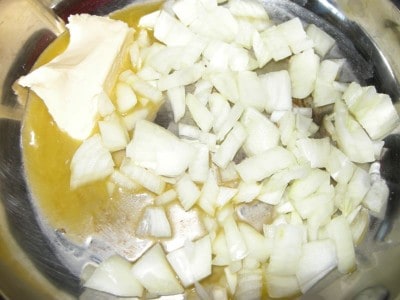 Now chop up your onion and saute it in about 2 tablespoons of butter (or any cooking oil if vegan) until tender. 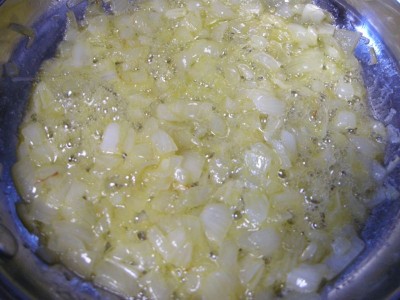 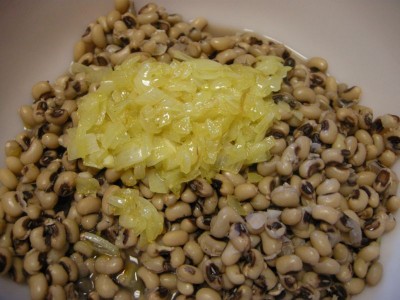 Now strain off your peas and put them in a large bowl, then add your onions. 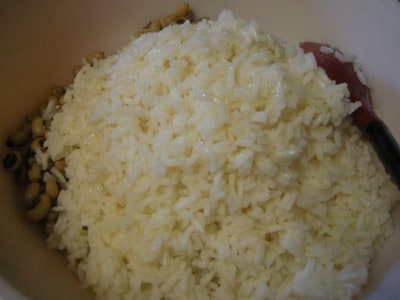 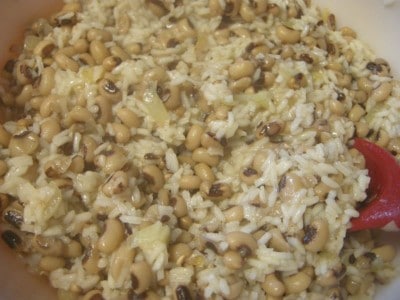 Stir all of that up… oh, look at the steam! 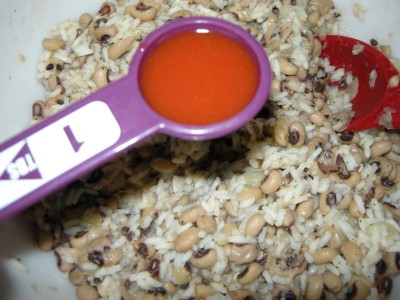 And add about two tablespoons of hot sauce, such as Texas Pete’s or… 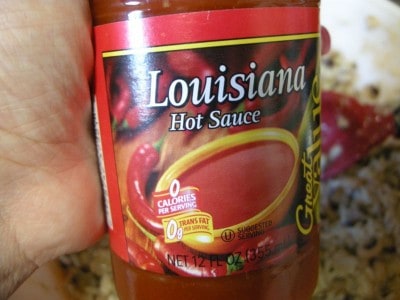 Walmart’s generic version ~grins~. Personally, I add more to mine but I do it once I have my serving on my plate so it won’t be too hot for the kids. Two tablespoons doesn’t really add heat so much as it adds flavor. 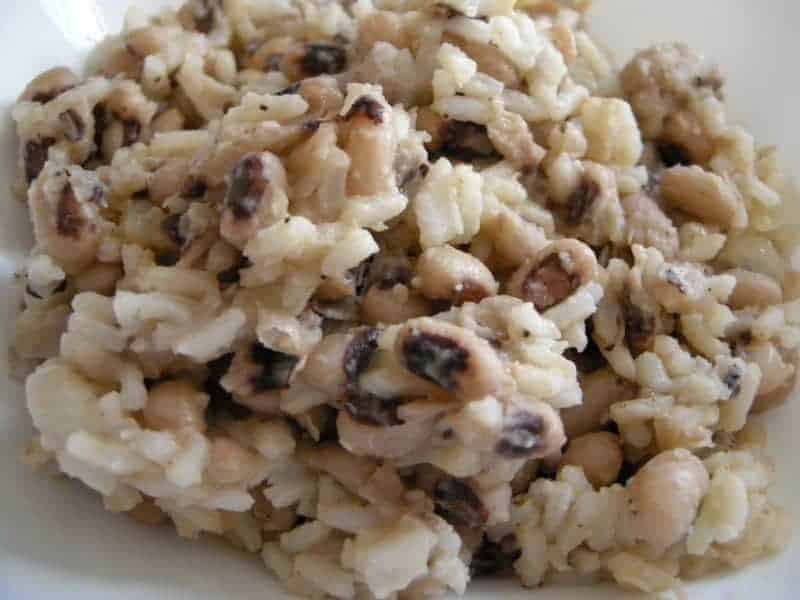 Store Hoppin John leftovers in an airtight container in the fridge for up to 4 days and the freezer for up to 3 months. Reheat in the microwave or on the stovetop.

Here are some more Southern staples you might enjoy: 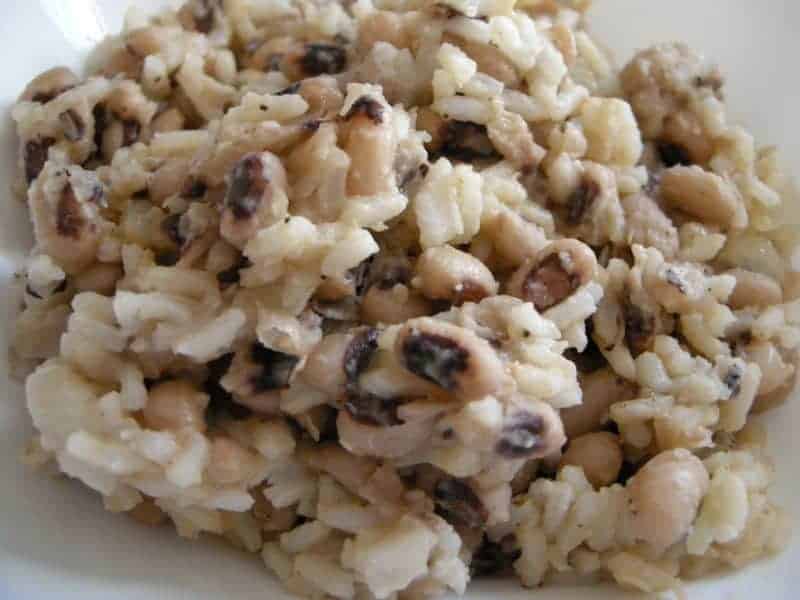 This is two recipes in one! Learn how to make traditional Southern black eyed peas and then use them in my flavorful vegetarian Hoppin John dish.
Print Recipe Pin Recipe
Course: Main Course
Keyword: peas, rice

I love black-eyed peas and eat them any way any day I can get them. I always have them with hog jowl bacon, greens and yellow cornbread on new years day. The yellow corn meal represents gold or “pocket money”, the greens are “folding money” and the beans are for humility or eating the most humble food to show reverence to God for providing everything for us. The tradition of leaving three beans on the plate is for hope, faith and love.

No need Holly, I just went and put notes in that Vegetarians should use vegetable brother in place of chicken. That is the only substitution needed 🙂
Have a great New Years!
Gratefully
Christy

Good catch! Guess that goes to support why I won’t be doing a vegetarian section on southern plate anytime soon, lol. I’m strictly carnivore 🙂
My vegetarian friends are accustomed to subbing vegetable broth.

Fergie is still the hottest member and probably the most talented member of Black Eyed Peas..~: