This recipe for baked ham features the easiest 3-ingredient brown sugar glaze. You’re going to want to keep reading to discover the secret ingredient that makes this glaze so tasty! 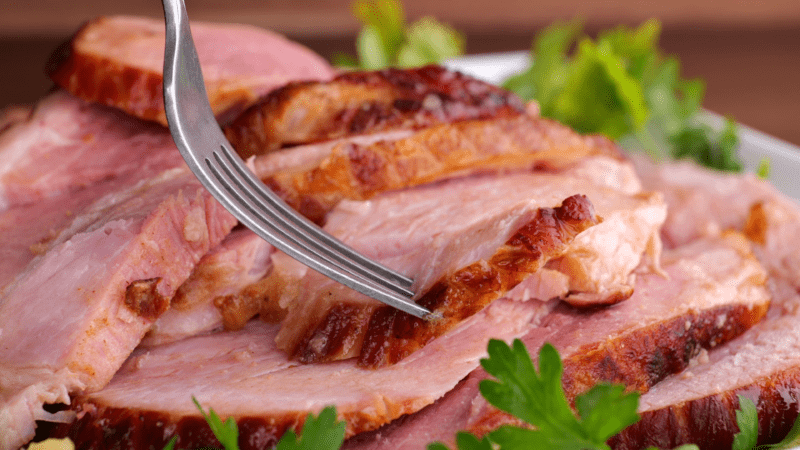 This recipe for baked ham is from my great-grandmother Lela. Her easy 3-ingredient glaze includes brown sugar, yellow mustard, and… coke! Yep, there’s no honey, ground cloves, or pineapple rings used in this ham glaze recipe. The addition of coke makes this glaze so tasty and ham so succulent everyone will be going back for seconds.

A good and simple baked ham makes the perfect main course for any meal and any occasion, including Easter and Christmas dinner. The added bonus is that once you bake a juicy ham, you usually have the leftovers to make at least three more meals. The hambone in and of itself is a goldmine for the best pot of pintos you could ever hope to eat or you can use it to flavor a comforting pot of senate bean soup.

One of my favorite things to do with baked ham leftovers is to reheat some Jordan rolls the next morning, split them in two, and layer warmed slices of ham in between them for a quick, easy, and darn good breakfast. Coffee washes it down just right. There are already several recipes on SouthernPlate.com using leftover ham. So glaze that ham and get it baking, but be sure to save the ham bone with a little meat still on it! Just pop it in a gallon size bag and stick it in the freezer.

Okay, now that I am sufficiently hungry, let’s get this show on the road!

There is another great ham recipe in my cookbook so be sure and check it out! It is one of many which are exclusive to my cookbook, so they will never be on SouthernPlate.com. 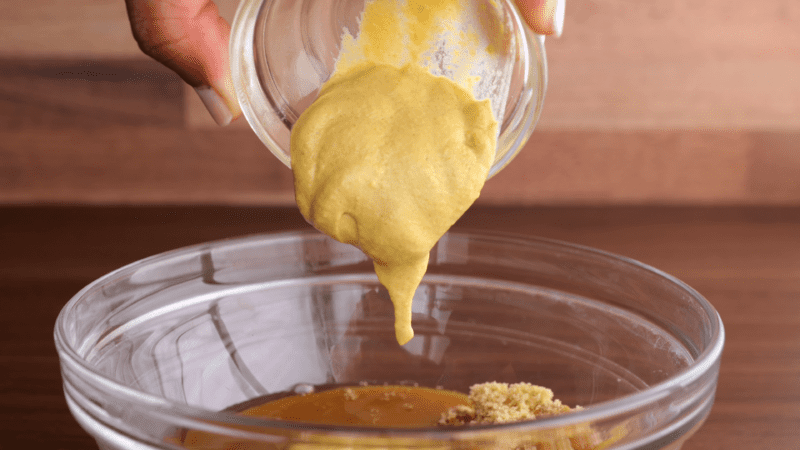 In a small bowl place your brown sugar, mustard, and coke. 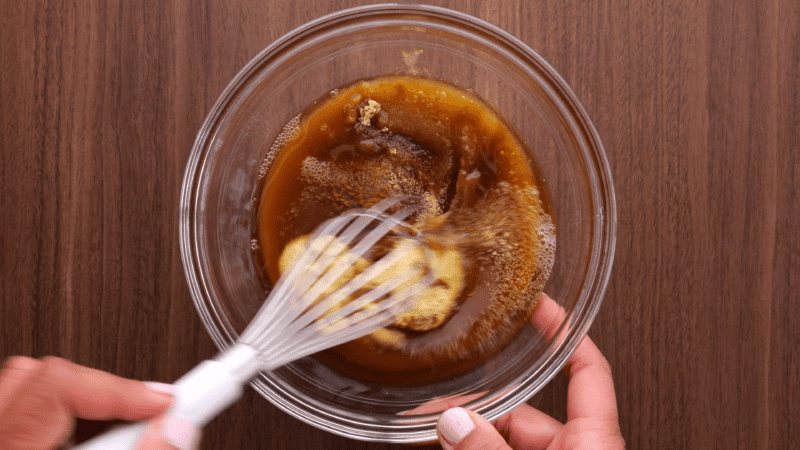 Give that a good stir.

It will become a lot more liquified than you expect it to.

On the off chance it doesn’t (you know, atmospheric pressure, leprechaun interference, whatever) you can always add another tablespoon of coke. 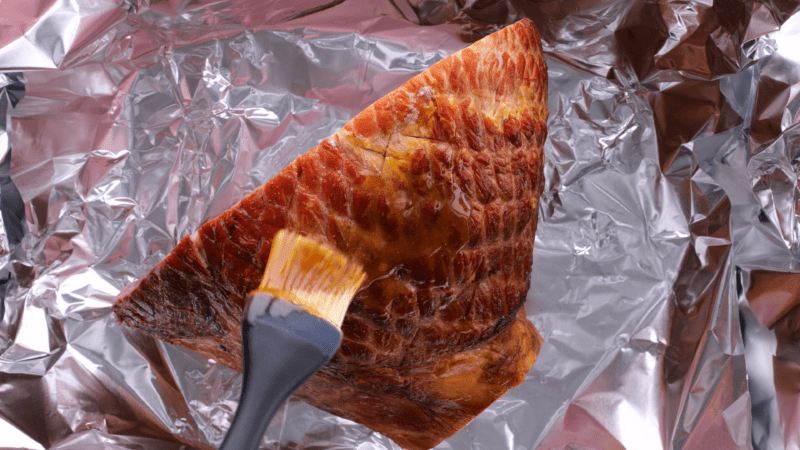 Line a rimmed (or sided) baking pan with aluminum foil, heavy-duty if you have it.

Place ham in the middle of the foil-lined roasting pan.

Brush half of your brown sugar glaze over the ham (just the parts that you can get to).

If you don’t have a brush just use a big spoon and put gobs of the glaze on the ham and then smear it around a bit.

Most of the gadgets we have in the kitchen are pretty much space taker-uppers anyway.

Seal that up well and roast ham in a 350-degree oven for 1 hour. 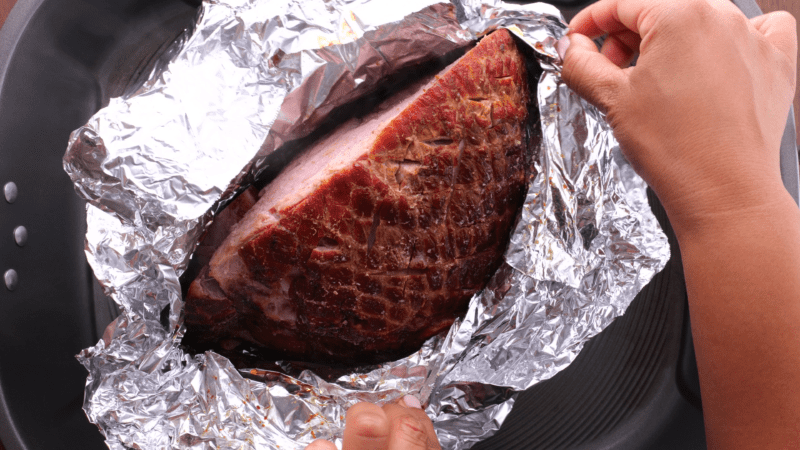 After your ham is baked it will look like this. 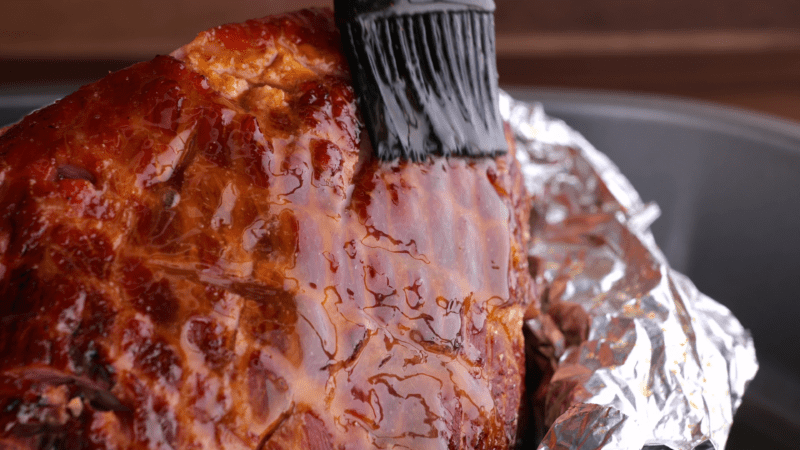 Peel the tin foil back and baste ham with the remaining brown sugar glaze.

Return to oven and bake ham for 30 minutes more uncovered, or until lightly browned. 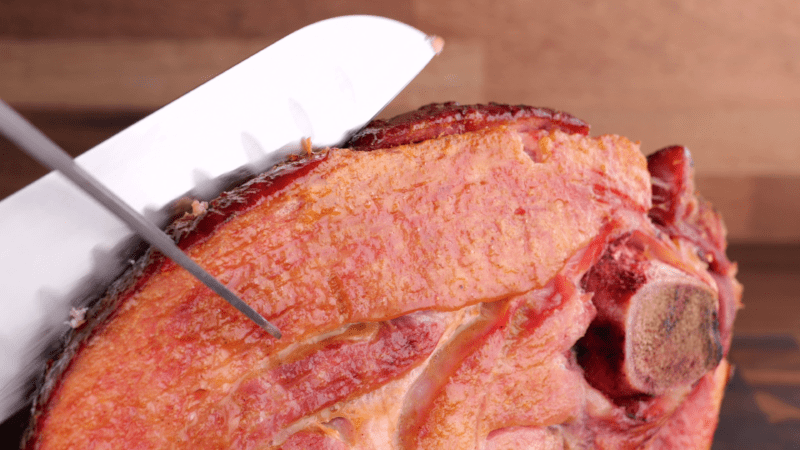 Remove the glazed ham from the oven and allow it to sit for 10 minutes before slicing. Slice ham how you like and enjoy!

If you need to serve it later you can cover it with foil to keep it warm and let it sit on your stovetop. I suggest cutting your cooked ham within half an hour of removing it from the oven because that is about as long as you’ll be able to stand waiting once you smell it!

This brown sugar glaze is delicious!

Feels good when people like your cooking, doesn’t it?

What do you serve with this baked ham recipe?

You can serve your baked ham in so many different ways. For the main meal (if this is a holiday or Easter ham), serve it alongside side dishes like mashed potatoes (we also have a sweet potato version) and fresh green beans. Another option is to serve it for lunch on a sandwich or with your favorite salad.

You may also enjoy these ham recipes:

Ham Salad (Recipes SHOULD be easy!) 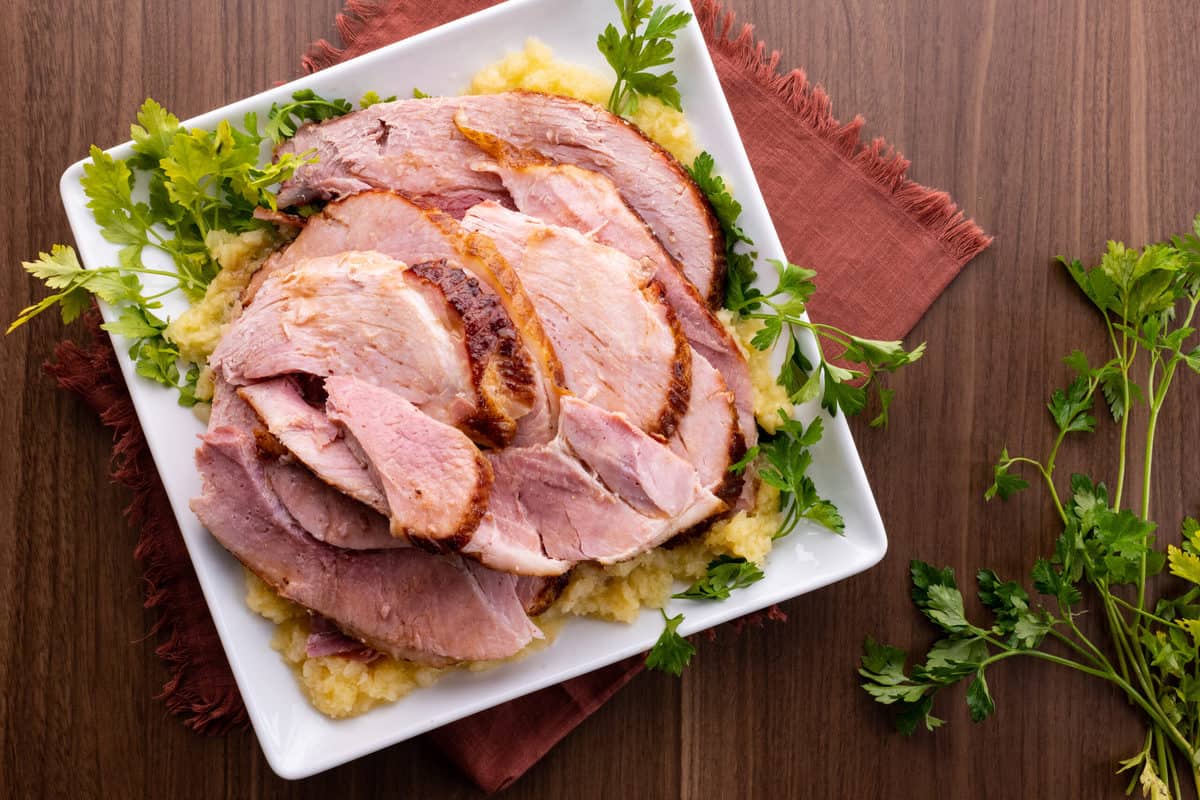 *And by the way, if you purchase that knife through Amazon, Southern Plate gets a very small commission from Amazon that goes towards helping us keep up the site.

Never be afraid to try. Remember, amateurs built the ark.

My grandma taught me to mix cranberry jel out of a can, and a small can of orange juice concentrate in a small pan and heat it slowly until it’s all melted together. Add 1/2 cup brown sugar and dissolve it then baste the ham with that. It’s really good and I have used this glaze on pork chops and even chicken.