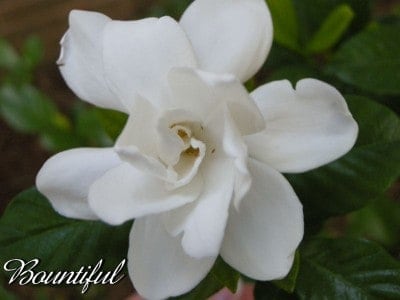 Things have been hopping around Bountiful! Gardens are growing, kids are learning, and the oven (as always) is cooking away! I thought I’d show you some of the things we’ve been up to around here and how the gardens are coming in. With the kids out for the summer, I’ve been having a lot of fun doing crafts and little projects with them (two weeks into summer, my son said “Ma, this has been the best summer of my life!). I just love that stuff! I have several different things we’ve been up to but I’m only bringing you two of them today. I’ll tack more into future posts!
But first…
~pulls her little soap box out from behind her back and places it in a nice even spot on the ground. She clears her throat and steps up on it, grasping her lapel in Abe Lincoln style and begins…~

Why There Are No Stupid Questions On Southern Plate…

Back in my high school days (sometime in between the discovery of fire and the internet), a new teacher came to our school, Mrs. Taylor. Kids didn’t like Miss Taylor from the very start. She was new and her class was hard. You had to actually learn what she taught in order to be able to pass (that wasn’t he case in some classes). You had to study, you had to do homework, you had to know the material. She was thorough and she had intent. She was a teacher.

But Mrs. Taylor honestly changed my life (and perhaps yours, too!). It wasn’t that biology was that groundbreaking of a subject for me and it wasn’t that I even remember all that much of what she taught unless it was reinforced in college. It was that one day during class when a question occurred to me and I actually got up the courage to ask her.

It was a silly question really, I will freely admit that, but it was something I was honestly curious about and did not know the answer to. I sat patiently in my desk, waiting on the class to clear out some before I started gathering my books. Rising, I dilly dallied a bit more until I was walking in the wake of the last straggler. Mrs. Taylor was wiping off the chalk board and I said “Mrs. Taylor, I have a stupid question.” Her immediate response was “There is no such thing as a stupid question, Christy”.

She went on to listen to me ask my question and acknowledged how she could understand my confusion on the matter (no , I won’t tell you my question! Even now I worry about what someone would think of me!) and then explained in detail what the answer was, even going so far as to dirty up her clean chalkboard again to demonstrate.

I left that room feeling like I had the upper hand over everyone in that class. Chances are I know something they don’t to this very day.

So that’s my philosophy here on Southern Plate. Personally, the thing I hate more than anything in this world is for someone to make me feel stupid and the thing I try to do more than anything is to not make anyone else feel that way. No one is born a good cook. Despite what some people might lead you to believe it is not some elusive talent that some have and others do not. It is a skill, easily acquired and easily mastered to whatever level you choose to take it to.

All you need is the right recipe, answers to any questions you may have, and a little bit of confidence.

I hope to give you all of that here.

Now join me as I post a bounty of information from Bountiful.

Bug experiments, Stained glass projects, and How my garden grows! 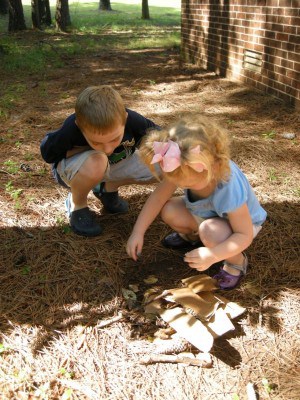 My kids, especially Miss Katy, loves bugs! We have had a lot of fun with this “bug experiment” by setting up a little oasis for them in our yard and then going back and seeing who has moved in.

We’ve actually done three bug experiments so far and keep going back to water them and restock them for more buggy discoveries. After twenty four hours, you’ll find all sorts of little critters. Ours has attracted the mother load of roly polies, ladybugs, and snails so far! 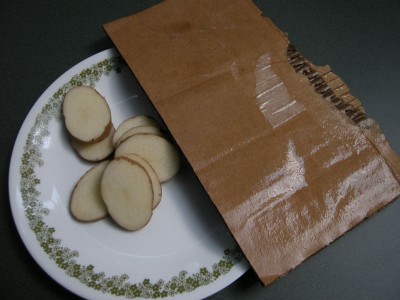 You’ll need: A potato,cut into slices, and a piece of wet cardboard.
I just tore a piece off an old box. 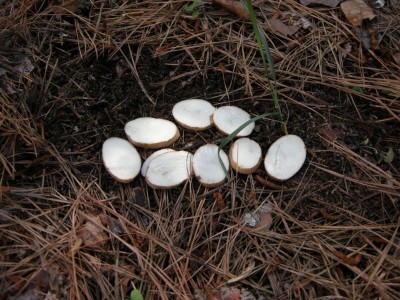 Find a nice bare spot in the shade and lay down your potato slices.
I had to brush a few pine needles away to make room for ours. 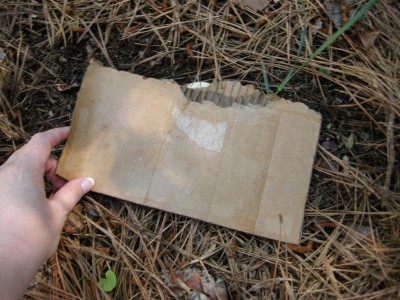 Cover with the wet cardboard. 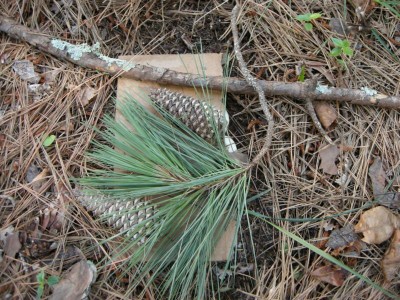 Then cover with a little more “stuff” to prevent it from being blown away.
Wait twenty four hours and come back to see what’s underneath!
For us, that meant a HUGE colony of roly polies of all sizes, much to Katy’s delight! We also have lots of snails.
To begin with (the first six to twelve hours or so) you’ll mostly have ants, but they will eventually go away when the other buggies find this yummy hideout you made just for them! 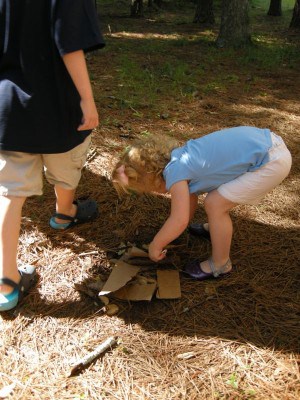 This is Brady and Katy checking out our original “experiment”.
They check them daily…sometimes several times a day!

They’ve had such fun with this! 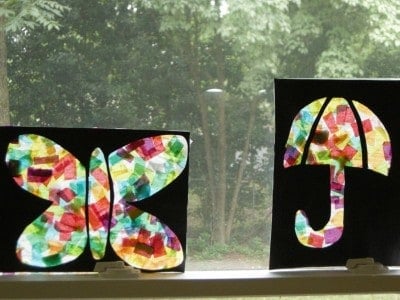 This is a fun project that my brother did when he was in kindergarten at Lincoln Elementary. I still remember him coming home with his stained glass art and Mama proudly hanging it on the front door for the sun to shine through. I was SO ENVIOUS! It was this project that got me thinking school was the most amazing and fun place on earth and I couldn’t wait to go!
However, When I got there we never did the the stained glass project.
Fortunately, My mama was a crafty woman and let us do it at home.
You look pretty crafty, too! 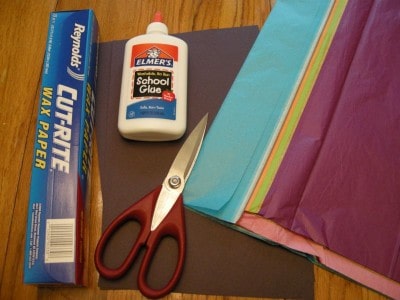 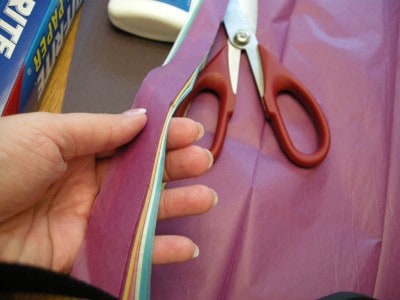 Cut a strip off each color of tissue paper and then cut that strip into little pieces.
What I did was buy the large multi colored package and just cut a strip right off the end so I can still use the tissue paper to wrap gifts and such if I need to later 🙂 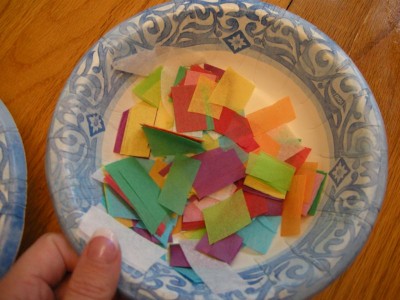 This is a bowl of my tissue paper pieces.
I gave each kid their own bowl to lessen the chances of world war three breaking out in my house on this particular day. That having been said, I’m making no guarantees for any other day in my house so if you show up, best be wearing an artillery helmet. 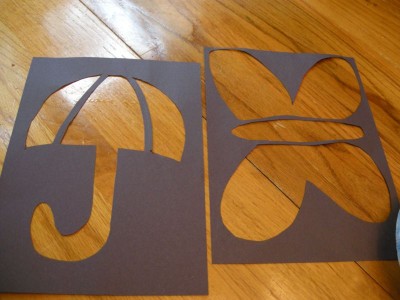 I just drew out some designs in pencil on the construction paper and cut them out.
You can use templates from the internet or a coloring book if you like.
It doesn’t have to be a specific design, you could just cut shapes also! 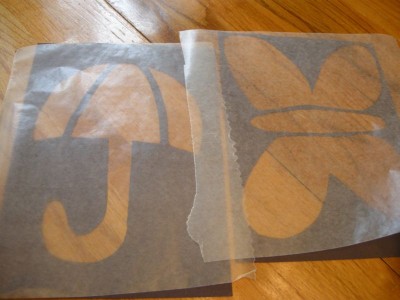 Get two sheets of waxed paper that are about the same size as your construction paper.
I say “about” here because the day I become a perfectionist is the day I wake up and my house has learned how to clean itself on autopilot. 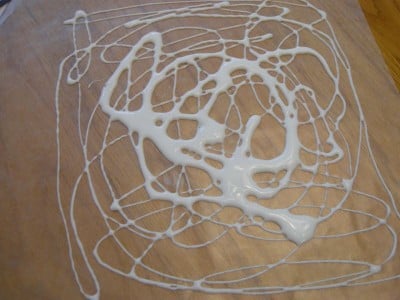 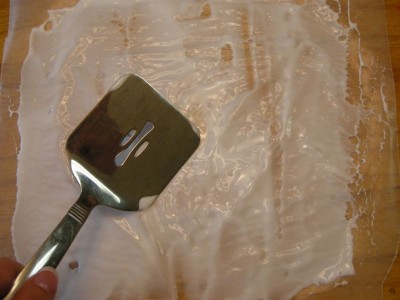 then smear it really well. 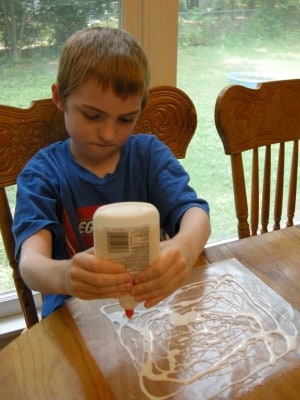 If kids are doing this project (hey, its fun for adults, too!), I suggest washable glue.
Go ahead and get the biggest bottle you can find because I have another project coming up that will use a TON of it! 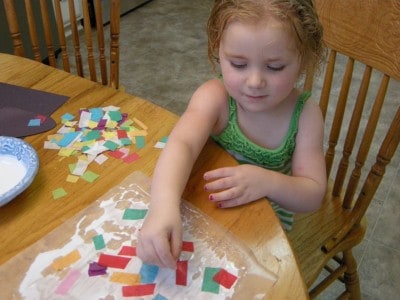 Let the kids fill up the paper with pieces of tissue paper.
This is the fun (and kind of long) part, they love it!
Some people dip the tissue paper in the glue and then put it on the waxed paper but that gets pretty messy.
This is a much easier way, I think! 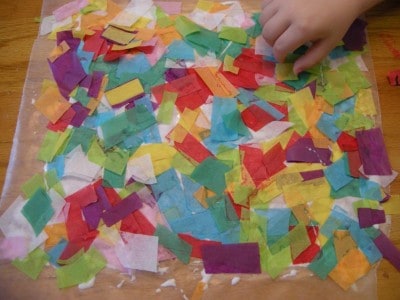 When they are done it will look like this.
Allow to dry and then glue or tape it to the back of your construction paper, trimming any overhanging pieces.

Display in a window where the sun can shine through!
Kids make the most beautiful things! 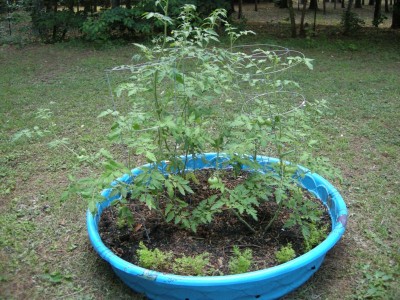 My gardens are doing really well, despite the FLOOD of rain Alabama has seen the past two months.

I have been watching out my window for Noah to show up and my squirrels to start lining up two by two!

This is my tomato garden, with a flurry of carrots around the outside.

I took these photos a few days ago and already there are many more tomatoes appearing. 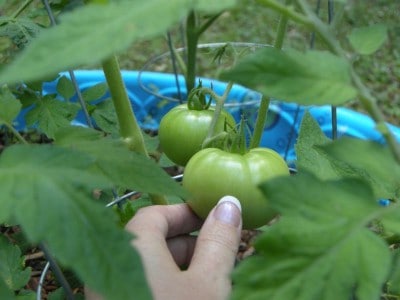 I haven’t pulled any tomatoes yet but next week my Southern Plate friend, Terri, is coming to visit me here at Bountiful and I hope to fry this one up for her! 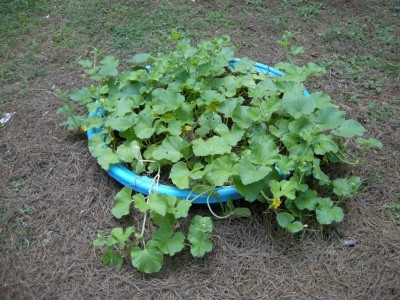 My cantaloupes are really spanning out! Check out this photo and then… 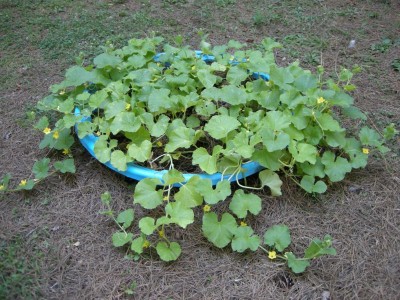 This is three days later! 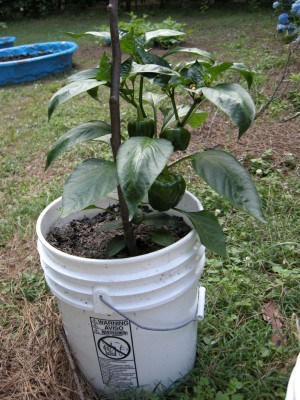 One of my kiddie pool gardens ended up not being in the sun as I thought it would be and that garden has pretty much petered out. I’ve since moved it and am about to replant it but haven’t decided what I’m going to put in there just yet.

I dearly wanted bell peppers and since that was the garden that fell victim to my lack of judgement, I purchased a little bell pepper plant for three dollars and planted it in a bucket so I could move it around and  make sure it got enough sun! I planted my buckets the same way I did the gardens. Drilled some holes in the bottom (small holes, just for a little drainage), layer of mulch, and then filled with dirt that had some fertilizer in it, then topped with topsoil. 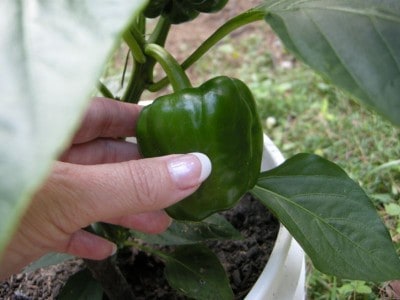 This plant has more than doubled in size in a very short time and is really taking off! 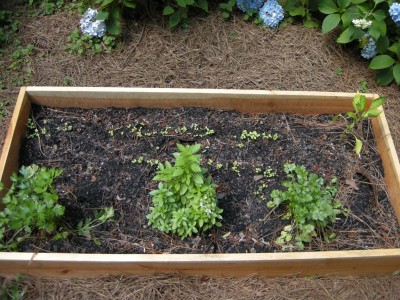 I decided to do an herb garden. You’ll hear a lot more about that in an upcoming video that is being produced right now!

I planted the herbs I use on a regular basis. Parsley, Basil, and Cilantro.

There is also a little straggler bell pepper plant in there that is not going to make it from the shaded garden.

My herb garden is my first endeavor at organic gardening. 🙂 I used organic garden soil and pine needles from Bountiful as the mulch in the bottom. As a squirrel deterrent, I use cayanne pepper. Unless you got spicy squirrels, that should do the trick. 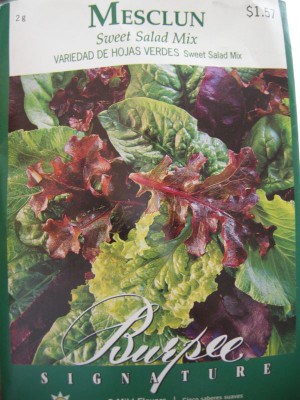 Those little sprouts in my herb garden are edible greens I’ve planted. 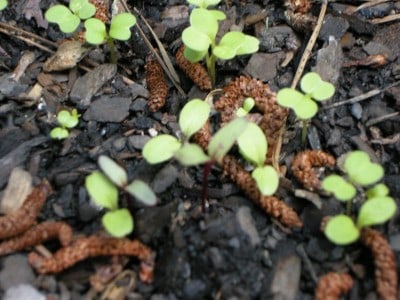 This is them after only three! 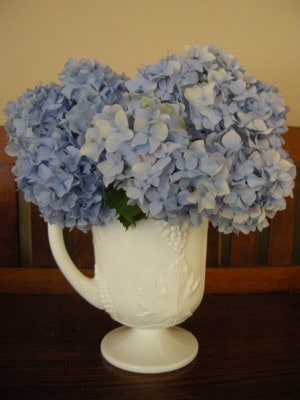 And I’m still enjoying my hydrangeas very much! Especially if I put them in this milk glass pitcher on my sideboard.

Well, thats all from Bountiful today.

I hope you’re getting ready for a great weekend and Happy Father’s day to all of you Dads!

You  have no idea the difference you make in your kid’s lives!

Around here, “Normal” is just a setting on the dryer.