These old-fashioned harvest stuffed cinnamon rolls are so easy to make. The soft dough is stuffed full of a delicious and flavorful combination that includes brown sugar, cranberries, toasted pecans, and orange zest. 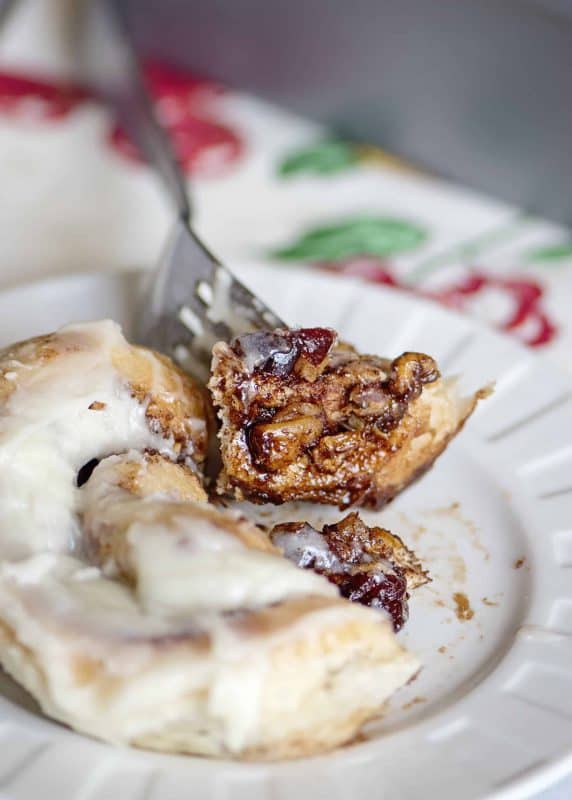 Well, it’s a unique and flavorful stuffing combination of brown sugar, dried cranberries, toasted pecans, and orange zest. It’s sweet, zesty, and nutty all at once (talk about a taste explosion). But wait, there’s more. If that wasn’t enough flavor, we also top the soft and sweet dough with cream cheese frosting, because you can’t have cinnamon rolls without icing! This recipe, along with my shortcuts to make it extra easy, is sure to become one of your fall favorites! 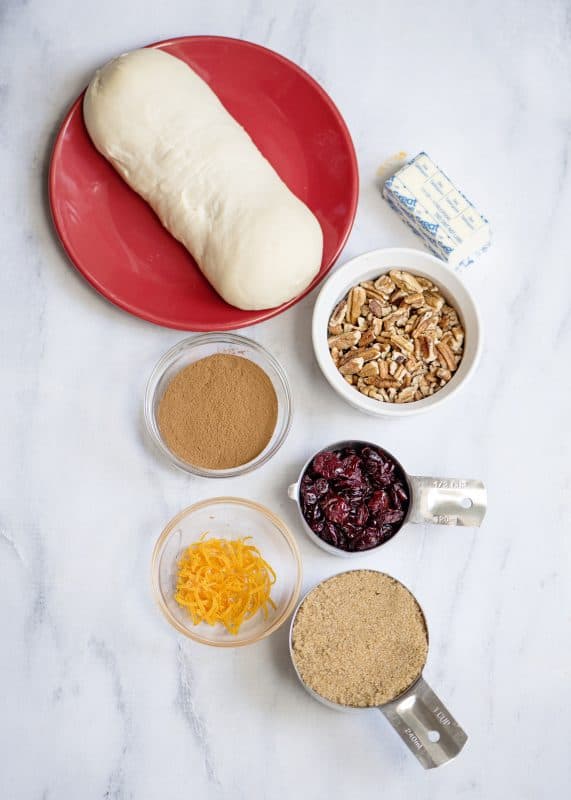 How to Make Stuffed Cinnamon Rolls 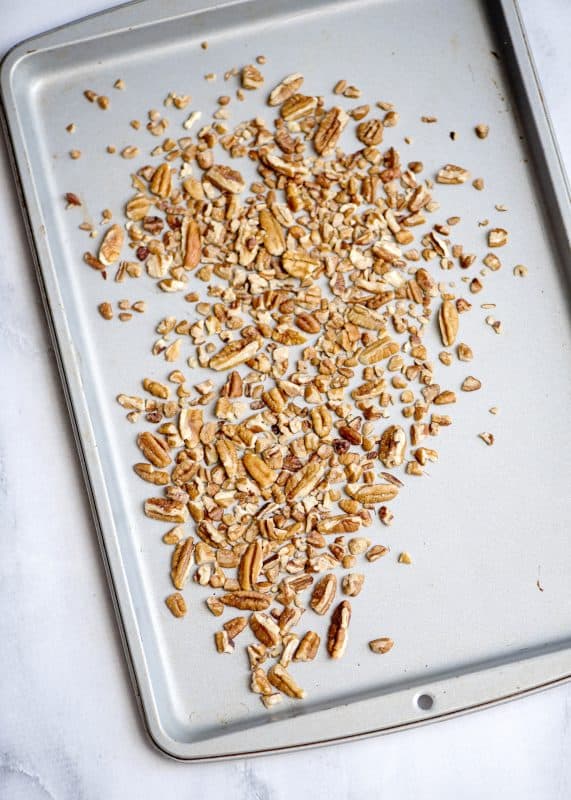 Place your pecans on a baking sheet.

Place them in a 350 oven for 5 to 6 minutes, keeping an eye on them so they don’t burn. You just want them lightly toasted. 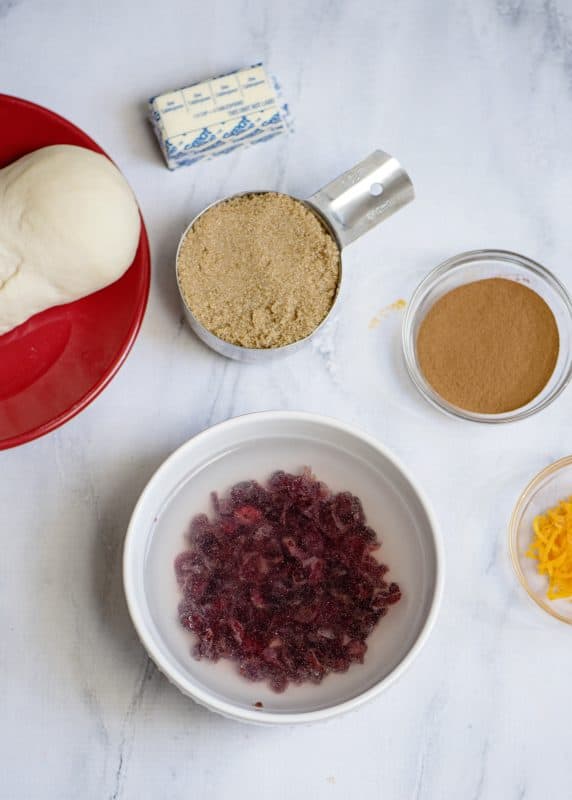 Before I add the dried cranberries to a recipe I like to plump them a bit.

To plump your cranberries for these stuffed cinnamon rolls, simply place the dried berries in a bowl and cover them in hot water. Let them sit for about five minutes or so and then drain them. 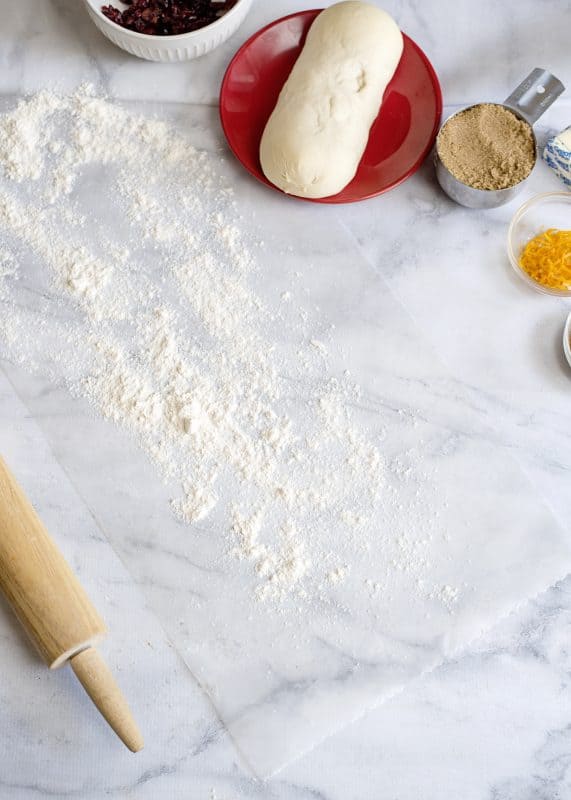 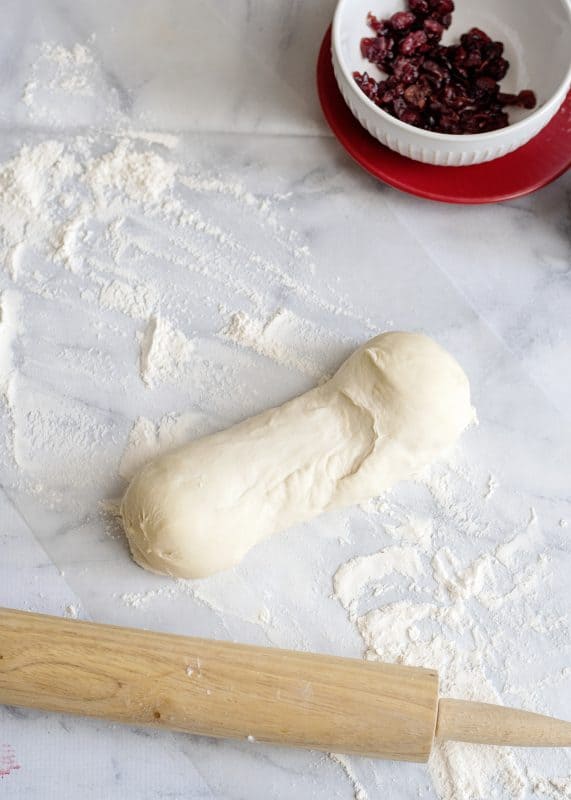 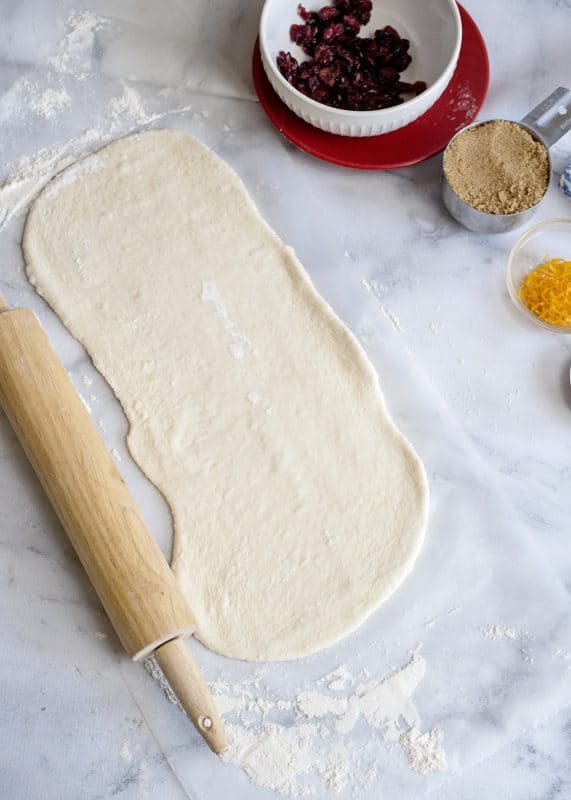 If your dough struggles with you, what I often do is roll it out a little bit, let it sit for a few minutes, then roll it out again. This will let it relax some and it will be easier. Either way, rolling it out will take a little muscle. But you can do it. 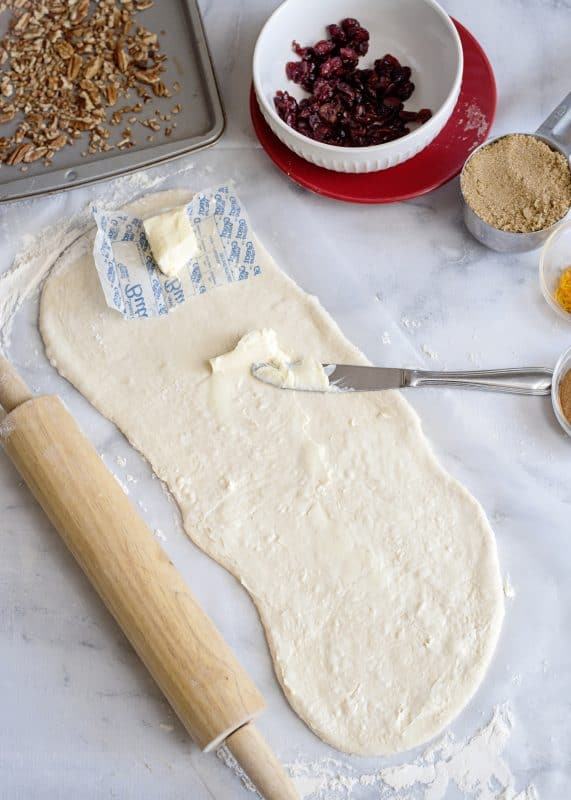 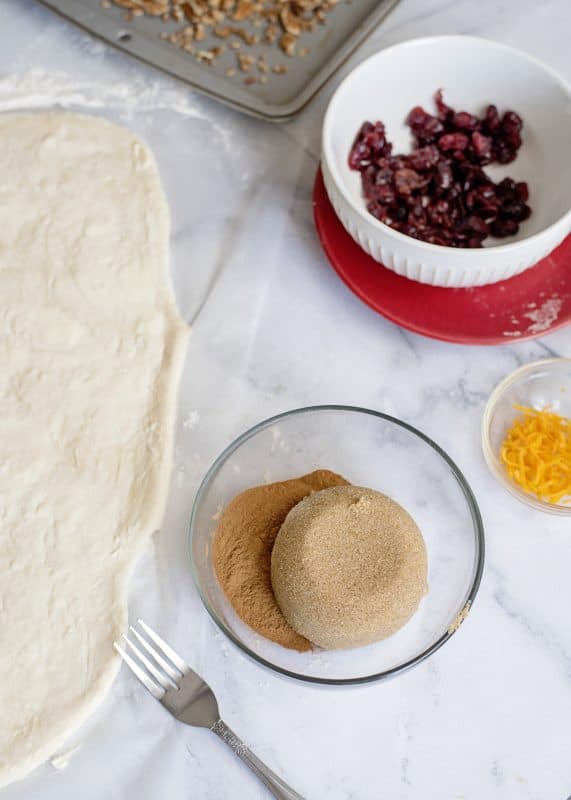 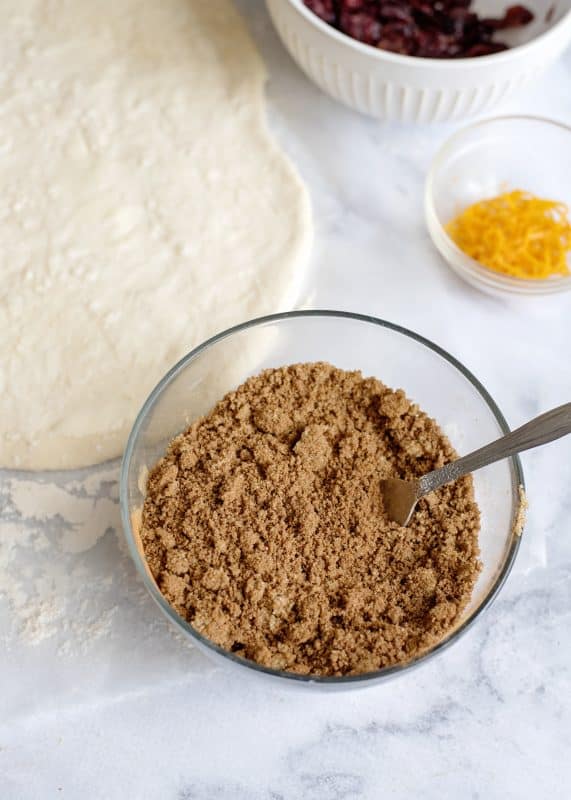 Stir the brown sugar and your cinnamon together until well blended (or until you get tired of stirring). 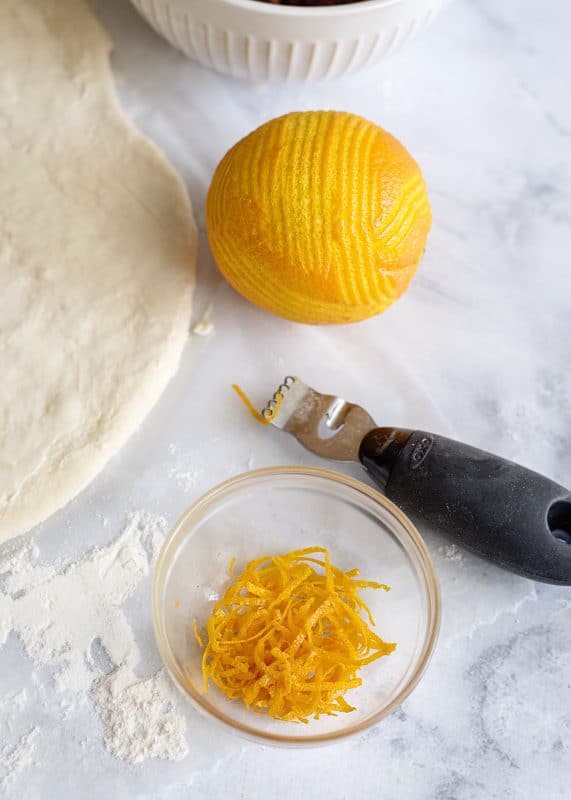 Now, most folks would use a zester for this but a little handheld grater works just as well as long as you have a soft touch.  If you use a grater just be sure you grate only the orange part and try not to get down into the white part because supposedly, that part is bitter. I’ve never tried it myself so I’m gonna say “supposedly” here. 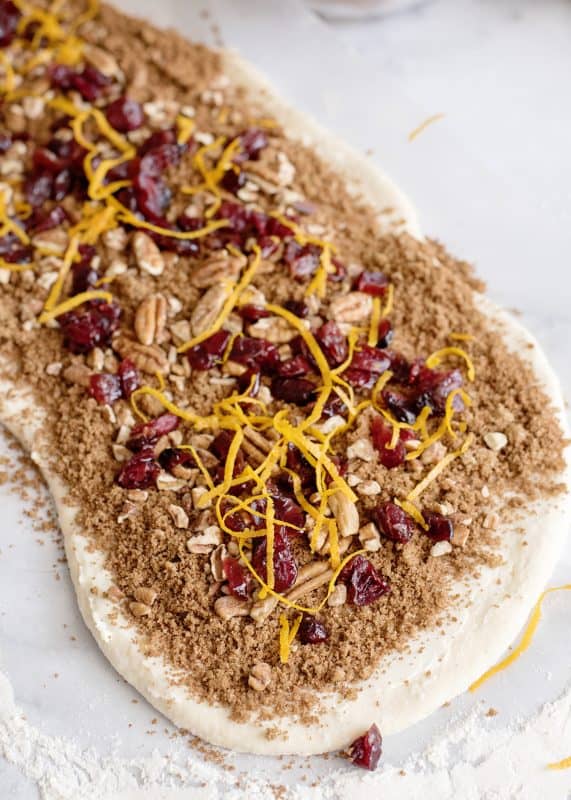 Now sprinkle your brown sugar and cinnamon over the butter and then top with the toasted pecans, orange zest, and cranberries. 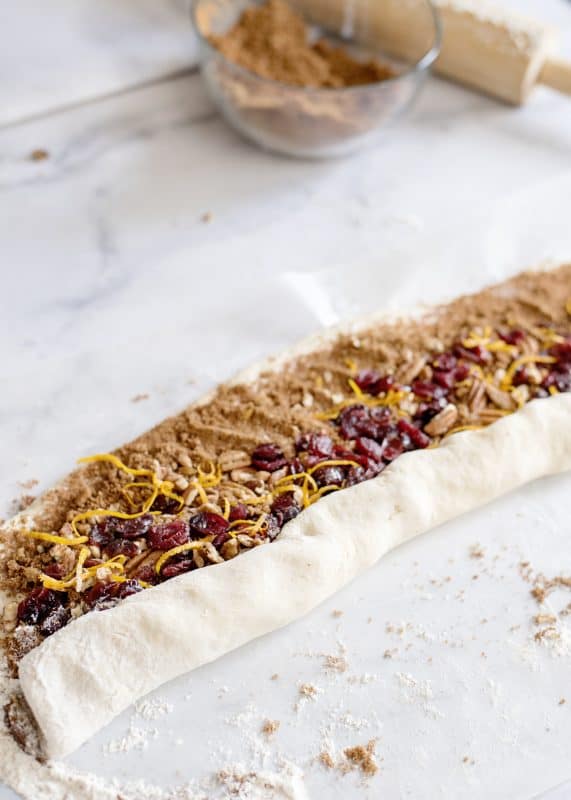 Now we gotta roll this puppy up. The trick to rolling it up is to kinda squeeze it together as you roll. 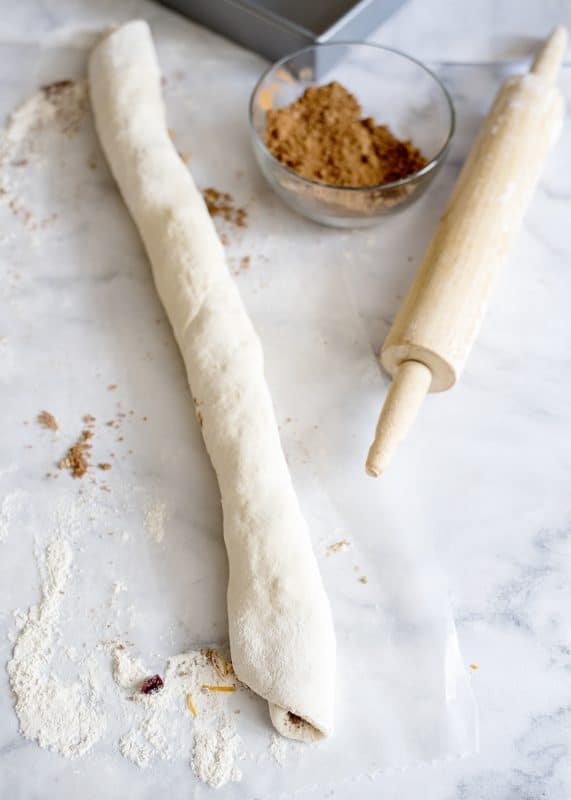 This is gonna really help keep your filling in while it bakes and also while you cut it and put the slices into your pan. You can kinda see here where I’ve pressed it together as I rolled it up.

Here is my final cinnamon roll log. Now we’re ready to cut it. 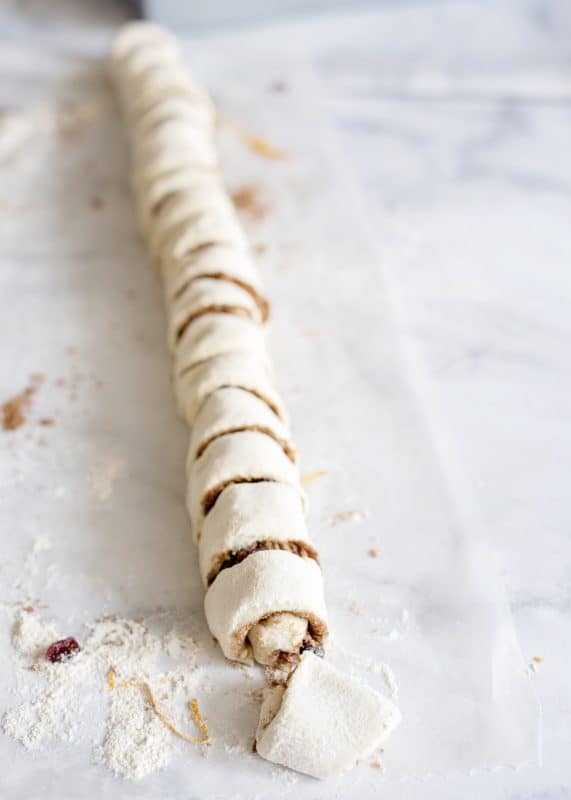 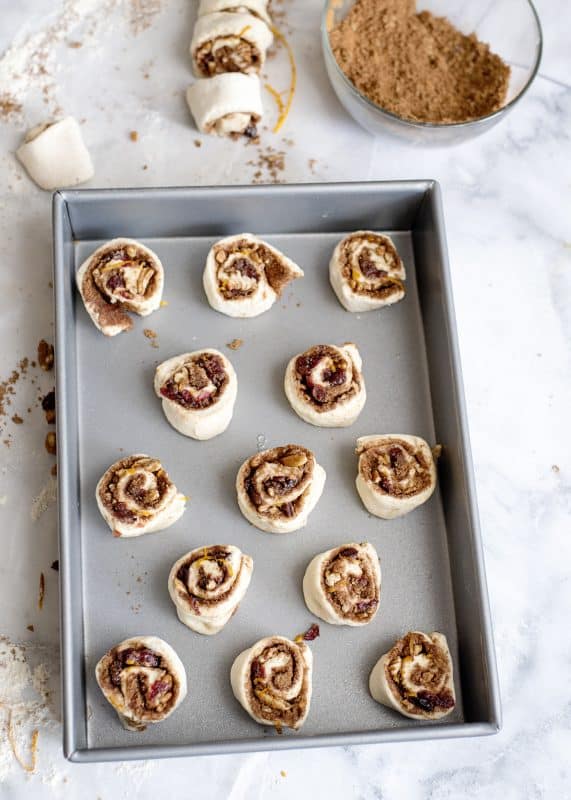 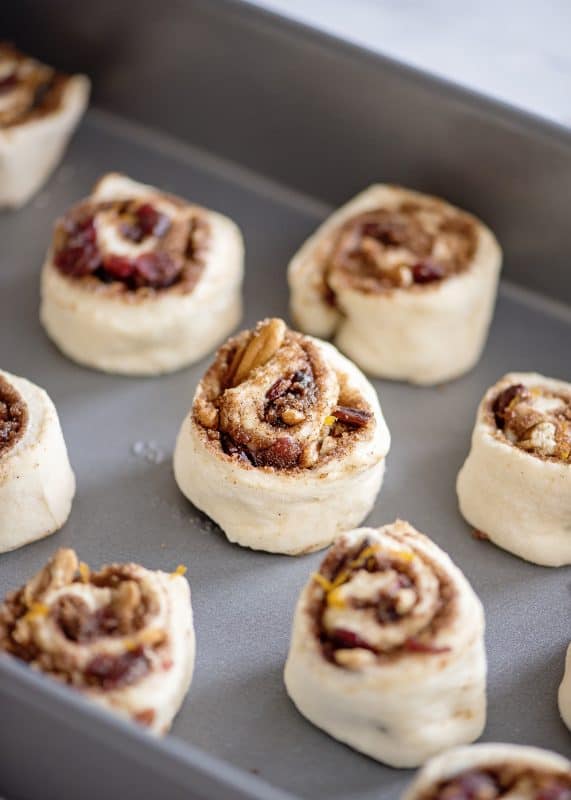 Place your cinnamon roll slices in the pan

Spread out a bit like this so they have room to rise.

Cover them and let them rise in a warm place until double in size.

If you don’t have a “warm” place, sometimes I just turn my oven on and let it preheat for a few minutes, then turn it off and open the door for a minute or two to make sure it is warm, but not hot. If it is “hot” it will start cooking your rolls and they won’t rise as they should, so make sure it is just warm. Then place your covered rolls in the oven for an hour or so until they double. 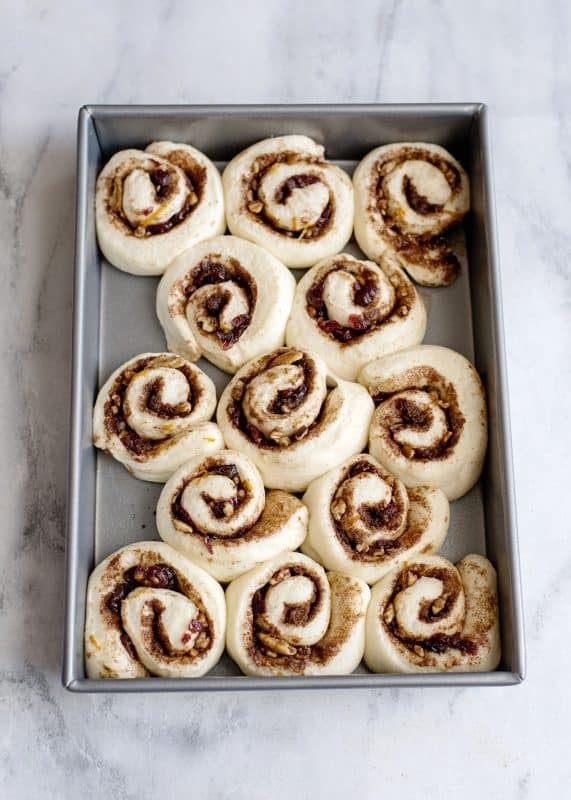 I bake these cinnamon rolls at 400 for about 15 minutes or until done. 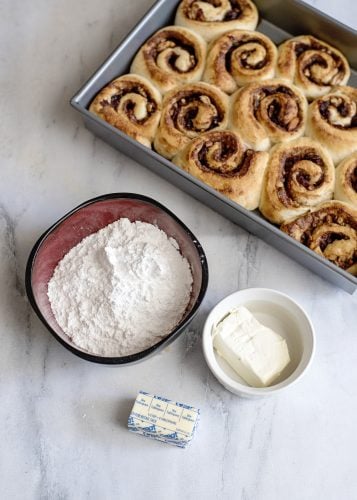 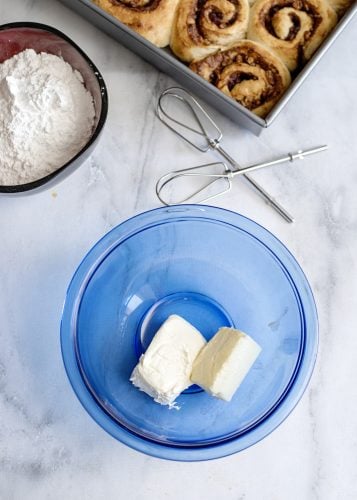 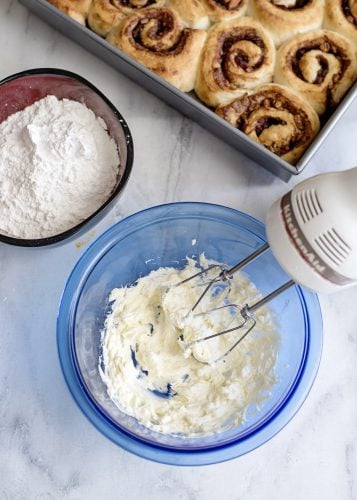 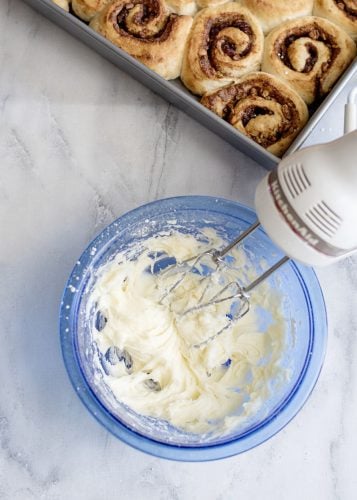 Make your icing according to the recipe below (you can visit my original cinnamon roll tutorial if you’d like step-by-step photos of the icing) and spread it over your warm cinnamon rolls. 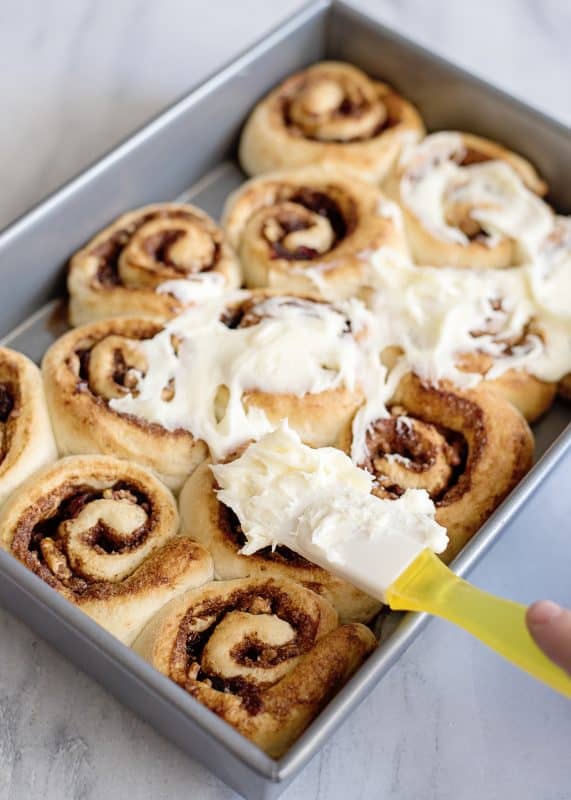 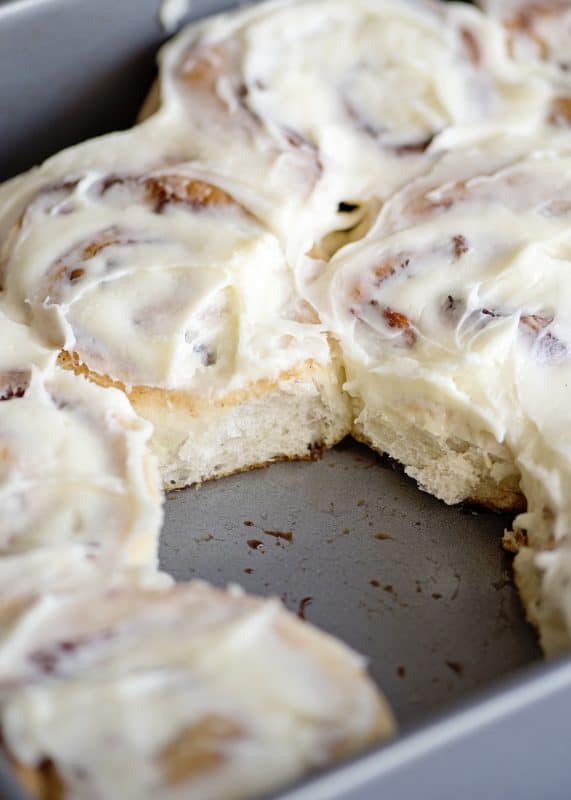 My husband ate those two just so I could show you this picture. He’s so supportive :).

Hope you get to make this stuffed cinnamon rolls recipe soon. They sure are good!

Store leftovers in an airtight container at room temperature for up to 2 days or in the fridge for up to 1 week. I recommend quickly reheating in the air fryer to make them nice and warm once more.

Once you remove the cinnamon rolls from the oven, this is the point where you would freeze. If you like, you can cook them until they’re done but not quite as brown as this, and then brown them more in the reheating. If you freeze them before they are cooked, it will kill the yeast. They won’t rise the second time and if they are already risen but not baked, the yeast will still die and they’ll lose volume and be smallish, hardish things.

I called Rhode’s bread dough company and they gave me these exact instructions that I’m passing on to you for the best way to freeze these. So to freeze: Allow them to cool completely, wrap them well in foil (really well), and place them in the freezer. To reheat, thaw in the refrigerator (overnight is great) and remove the foil. Cover loosely with more foil and place in a 200-degree oven for 15-20 minutes. Ice and serve. 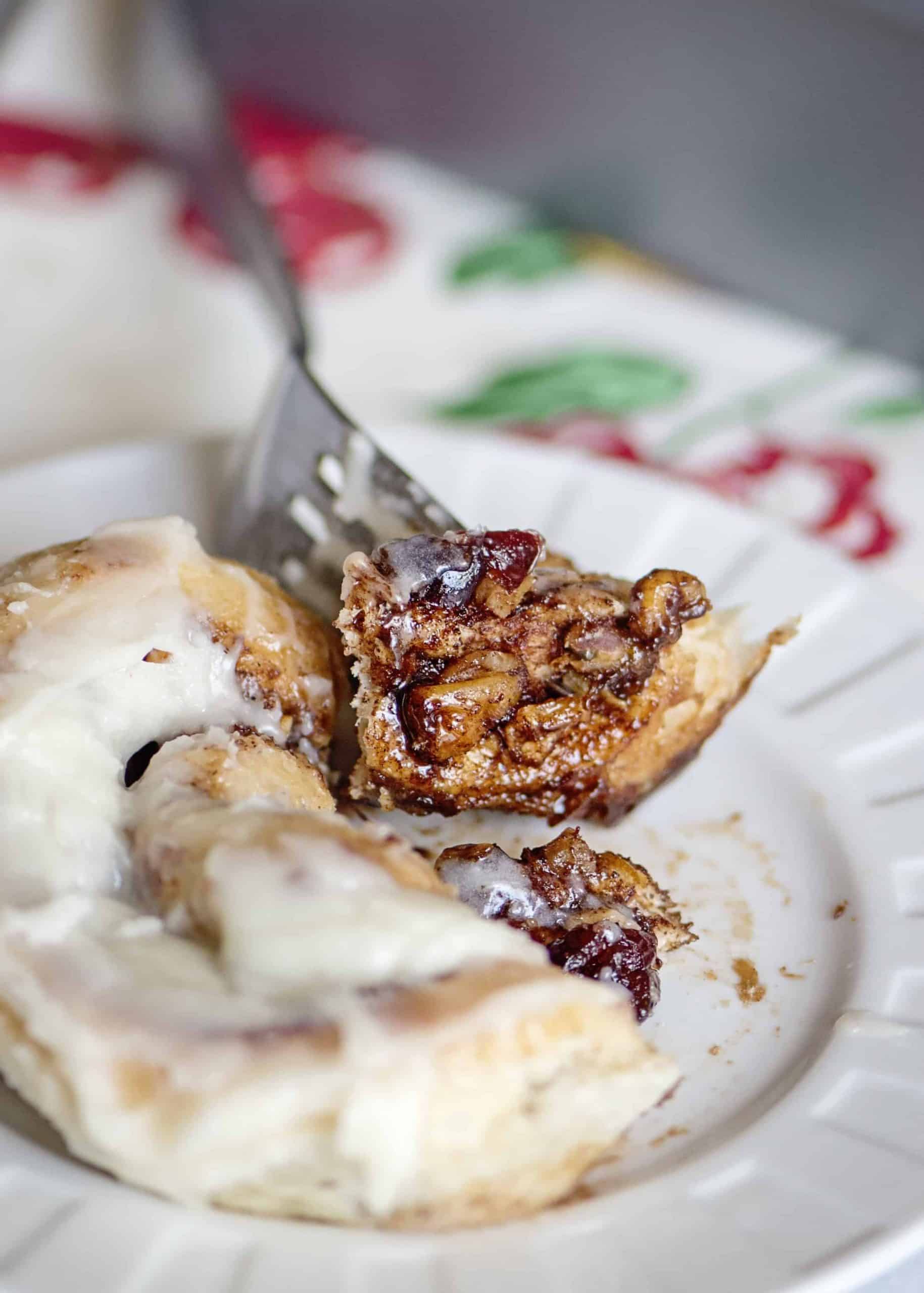 “It’s better to be kind than to be right.” 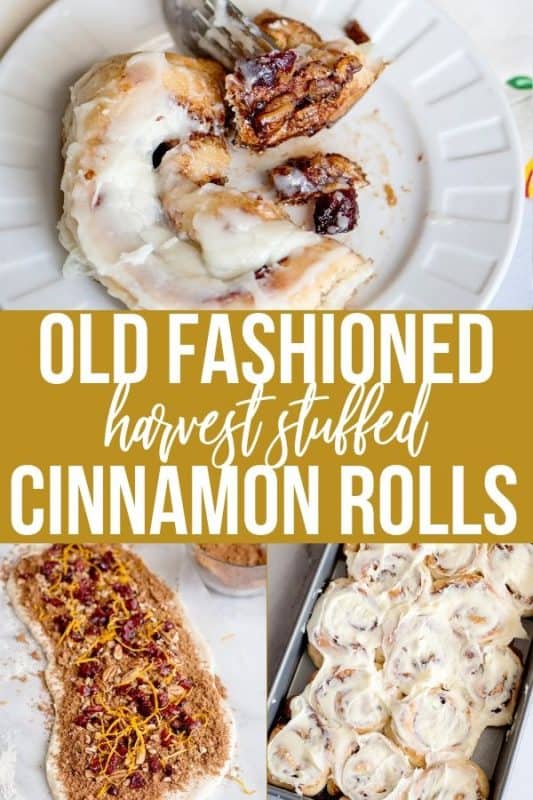 THANK YOU for these recipes. I’m European and I’m married to an American. So…I’ll just say that our foods are pretty different from yours. Your blog is one of the ones that helps me cook the ‘American’ way for my hubs.

I am so glad to hear that the recipes come in handy Katy!! What is his favorite?

Can I fix these the night before, put them in the fridge at night then get them out in the morning to rise and bake?

Christy,
I made your cinnamon rolls today and had a problem I hope you can help me with. I used bread dough. I baked for 14 minutes as I did not want to burn them. My oven was smoking though because the brown sugar leached out of several of the cinnamon rolls scorching the pan and causing the oven to smoke. What did I do wrong? I want to make these again but most of the rolls were burnt on the bottom..please help! I would love to make these correctly on Christmas morning. Thank you Christy

SweetCarol
Reply to  Sheri A

Use the parchment/foil paper with the foil side down. That way it is on the parchment side. I think it might help them a bit. And you might need to squeeze the rolls when you roll them up, or turn them upside down so not as much gets out. Good luck.

Have mercy! Kept me awake last night thinking about making them this morning. Gives a whole new meaning to cinnamon roll!

~giggles~ I didn’t mean to keep you up Randa, but I sure am glad you liked them!!!

I absolutely LOVE cinnamon rolls and I’m definitely going to try this! I love the bowl too! I love to buy vintage bowls – just singles – whatever I can find at the thrift stores. If only they could talk!

I don’t care for icing of any kind on my cinnamon rolls. I grew up with a Grandma that was the Cinnamon Roll Queen of her county. She said that if they put icing on them, they are hiding something. I agree! I use the best cinnamon (Vietnamese) and it has heavenly flavor. Why would you want to cover that up with too sweet icing!

I think it is all in how we are raised Lori. I had no idea that Vietnamese cinnamon was the best, is it easy to find?

It’s commonly found labeled as “Saigon Cinnamon” and it is absolutely delicious. Much more aromatic and flavorful. I buy it in bulk from a baking supplies store! It’s that amazing.

The best Cinnamon, I understand, is the only real cinnamon and it is Ceylon Cinnamon. You can get at Whole Foods and order on line. It is not as strong a smell but is a bit sweeter. Other cinnamon has something in it that is a bood thinner similar to warfarin. The Ceylon is true cinnamon and doesn’t contain the stuff that thins the blood. There is a Vietmanese cinnamon, and it may be called Saigon but I undestand that the Ceylong is better for people. Check it out on line.

Ohhh, I have to try this. Never seen them made with a pre-bought bread roll. It makes it too easy to pass up! That’s so sweet your Mama gave you the bowls. 🙂 Love the pig spatula!