If you’ve ever wondered what churro chips would taste like, you need to make this super quick and easy 4-ingredient cinnamon tortilla chips recipe. Crunchy tortilla slices are coated in a delicious combination of cinnamon and sugar. Just try and stop at one bite! 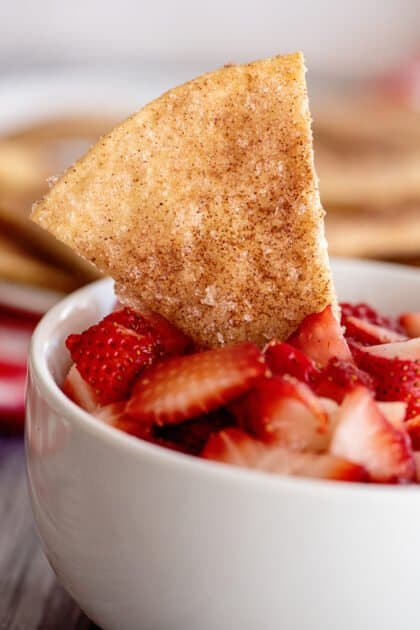 Y’all made me make these! Every time I’ve mentioned something about making Tex Mex someone would talk about these and ask if I’d made them before and every time someone mentioned it I’d think, “Wow, that DOES sound good!”.

So I finally got around to making a batch of cinnamon tortilla chips and now I see what all the fuss is about. These are DELICIOUS. I love how crispy and cinnamony they are. The kids had cow fits over them, and I ended up having to make two more batches! Some folks have told me that they serve them with honey, some with a fruit salsa of sorts, and many just eat them as is, which is what we have started doing. Either way, you can’t go wrong!

I also love how easy it is to make these churro chips. All you have to do is mix the cinnamon and sugar together (name a better combo), brush tortillas in butter, sprinkle on the cinnamon sugar, and bake! In less than 10 minutes they’ll be ready to devour. Which is a good thing because I don’t think my kids would wait any longer!

So tonight is going to be taco night at our house. One of everyone’s favorite meals and easy peasy to make. Here are some of my favorite taco recipes: Greek chicken tacos, instant pot beef barbacoa tacos, and sweet potato and black bean tacos. I think a serving of cinnamon tortilla chips will be the perfect dessert afterward, don’t you think?

Ooh, let’s make some of these to go with our tacos now, okay? Sit down and get comfy, I’ll have them ready in a jif! 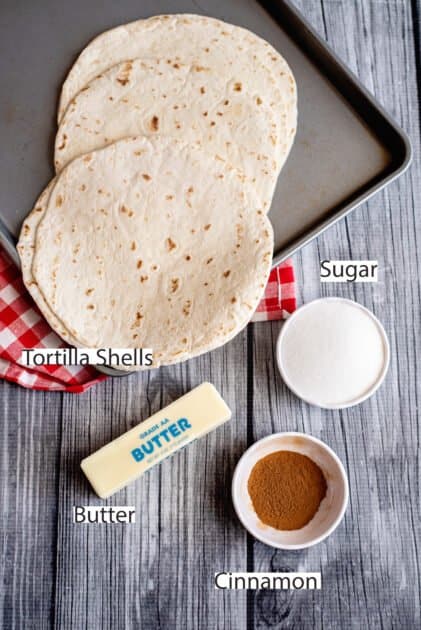 How to Make Cinnamon Tortilla Chips 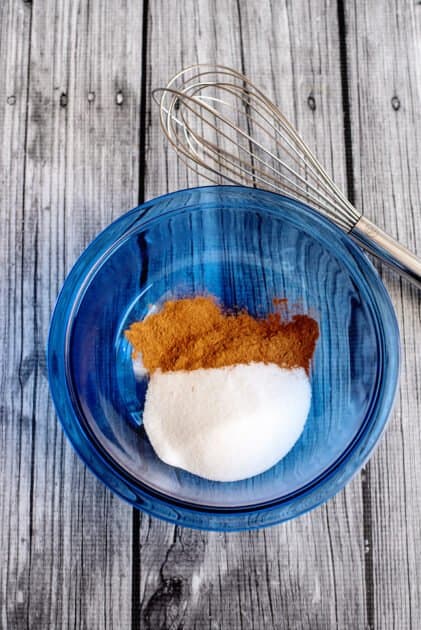 Place your sugar and cinnamon in a bowl. 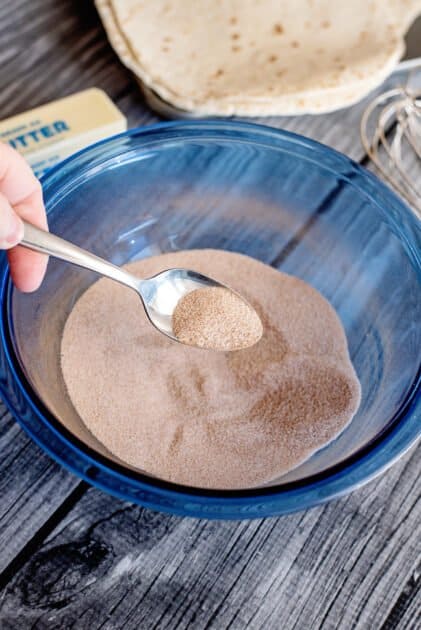 Stir that up a bit. 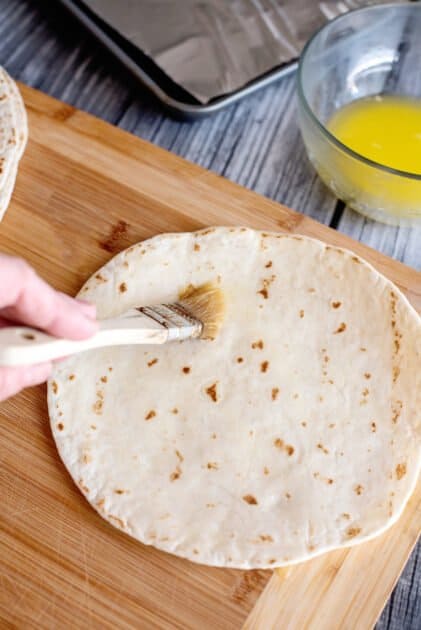 Melt your butter or margarine and brush it on one side of each flour tortilla. 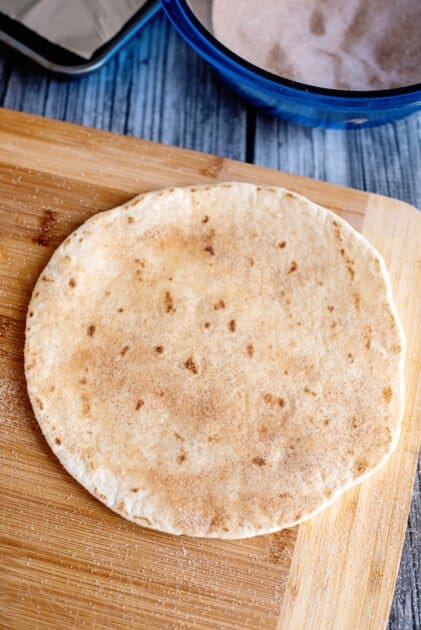 Sprinkle with the cinnamon-sugar mixture, then repeat with the other side. 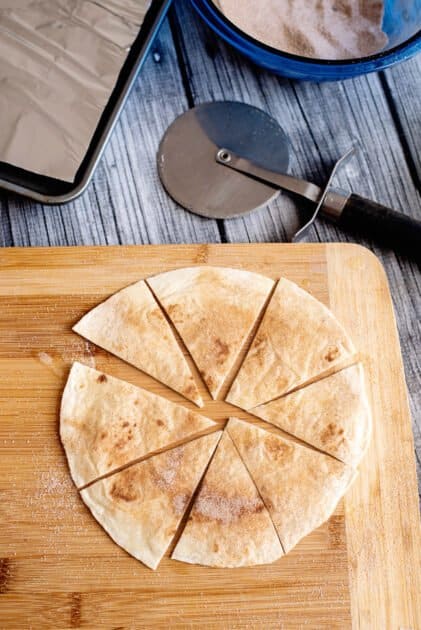 I used a pizza cutter to just slice it into wedges. 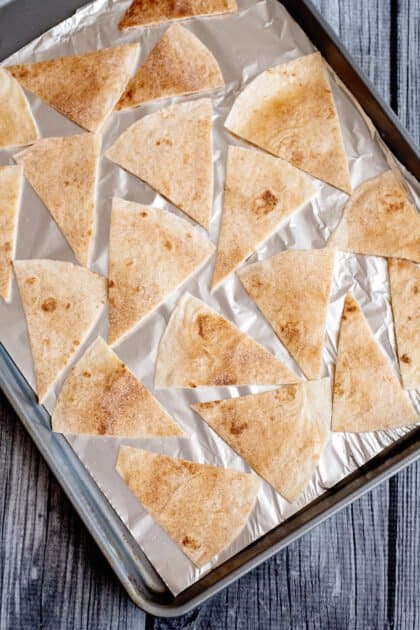 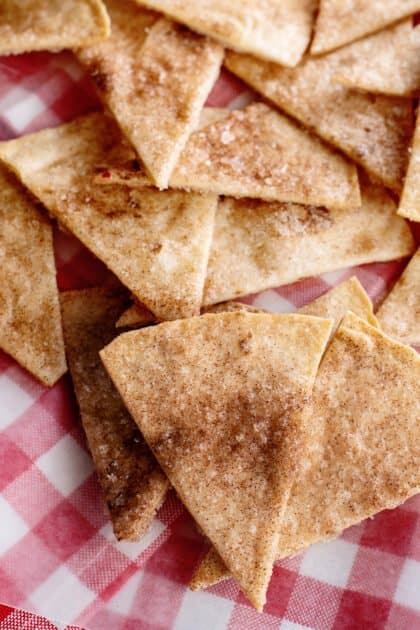 Chips will crisp up as they cool. 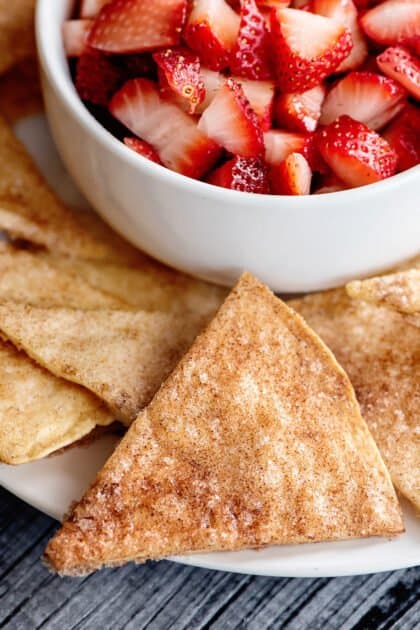 Serve these cinnamon tortilla chips however you like. While they make the perfect snack on their own, they’re also a grand addition to your taco night!

Store leftovers in an airtight container at room temperature for up to 3 days. I recommend quickly crisping them up again in the oven or air fryer. 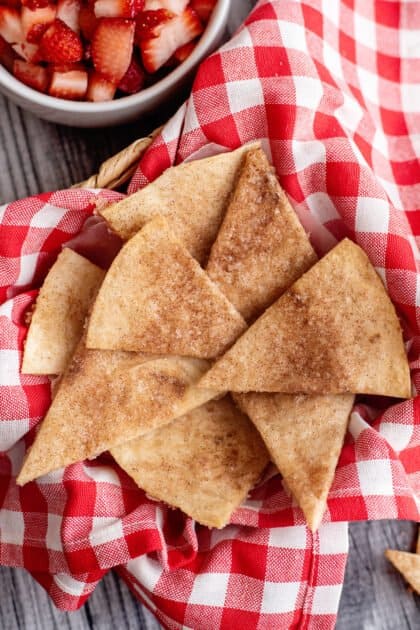 How do you serve baked cinnamon sugar tortilla chips?

There are so many ways to serve cinnamon tortilla chips! Serve them plain or drizzle them in honey, maple syrup, or even peanut butter for a seriously scrumptious snack. Another option is to serve them with homemade fresh fruit salsa, some finely diced strawberries, or make dessert nachos. Place a single layer of chips on a platter and top with softened ice cream, strawberry slices, and hot fudge or chocolate sauce. A smaller but just as delicious dessert includes serving the baked cinnamon chips with a scoop of vanilla ice cream and caramel sauce.

Can I fry my tortilla chips instead of baking them?

Yes, if you like you can pan fry your cinnamon sugar tortilla chips in a layer of vegetable oil until crisp and golden.

Can I use corn tortillas instead of flour tortillas?

Check out these other sweet cinnamon treats: 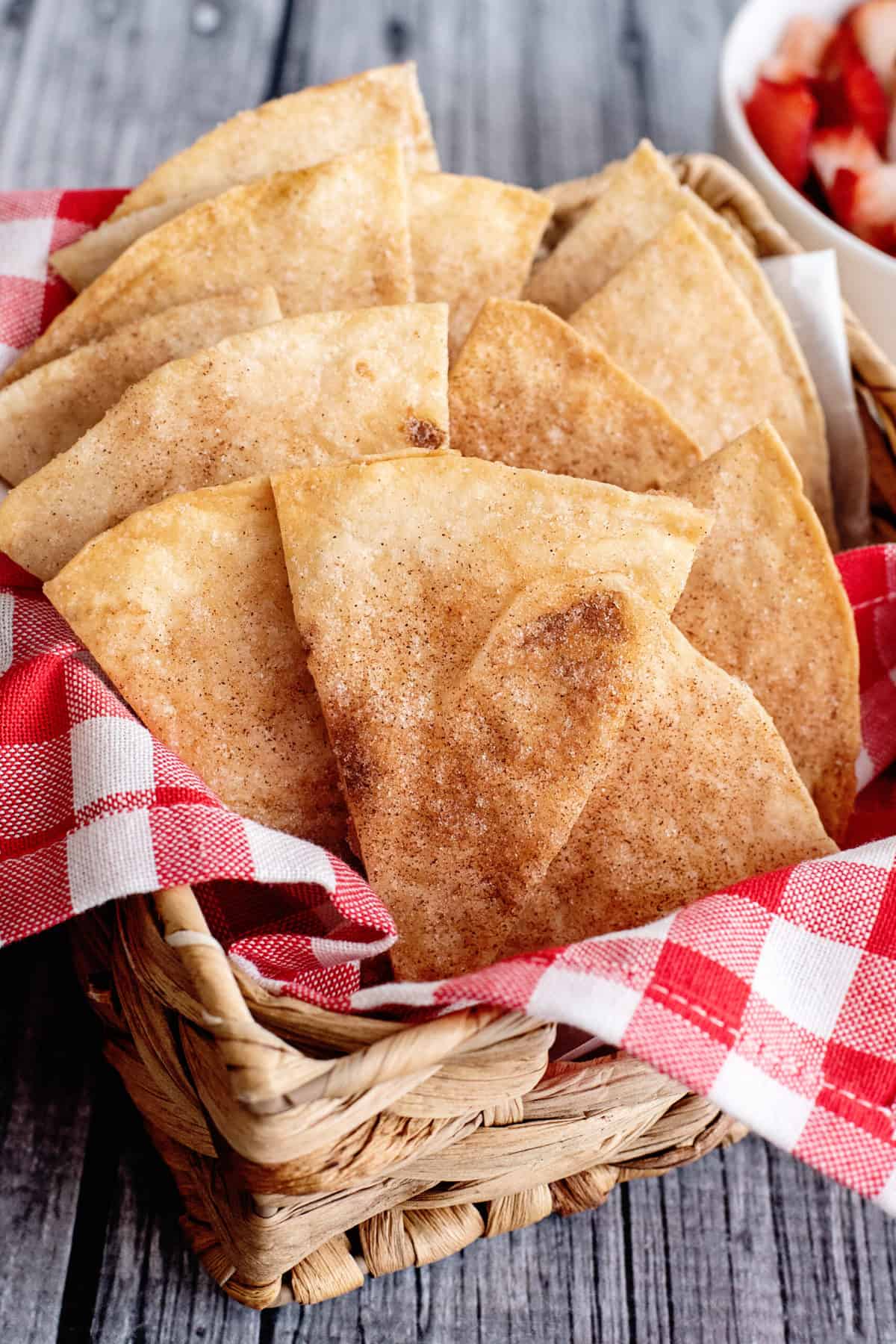 If there is leftover cinnamon sugar, store it in a plastic bag to use next time.
Tried this recipe?Mention @southernplate or tag #southernplate!

You are who you are, so be yourself at all times.

Later on no one will be shocked or disappointed.

Submitted by Shirley. To submit your quote, please click here.

Love easy yums, and anyone who criticizes should be required to cook for your family for a solid month and “show you how”, LOL bet not many have th enerve.

Outstanding with any fresh fruit or berries! YUM as usual!!!! Thanks for the recipes! ;D

I put these on a platter and put cut up strawberrys and coolwhip on top. Kind of messie but so worth it.

I have started making my own tortillias and I make a double recipe but I always have a few leftover that I have to trash before I get around to using them, now I know a yummy way to use them. I hate to waste anything. As always Thank you Christy.

My family loves these. I usually fry these in a pan instead of baking and then sprinkle on the cinnamon sugar. This method seems a lot easier and less messy.

I have my 3 grandkids coming over this weekend I love for them help me make something yummy. I think this is our project for Sat morning!

I’ve been making these for quite some time. When we have guests I put a scoop or two of ice cream in a pretty glass, top with a couple of these cinnamon wedges and drizzle with honey. Very impressive and easy dessert!!