Talk about a multi-tasking dish! This easy homemade cinnamon applesauce recipe makes a perfectly delicious side dish, sweet treat, snack, or dessert – the choice is all yours! 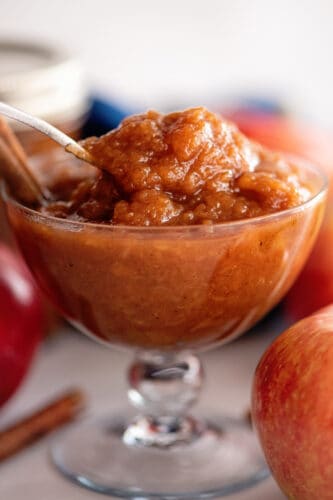 I’m telling ya, you won’t purchase store-bought applesauce again after trying this little homemade cinnamon applesauce recipe. It’s so easy to make and includes only four ingredients: apples, brown sugar, ground cinnamon, and nutmeg. All you have to do is peel and slice the apples, before popping the ingredients in the slow cooker and going about your day! Your house is guaranteed to progressively smell like heaven as the apple sauce is created.

The best part is, this crockpot applesauce is such a versatile recipe. First, enjoy it as a side dish alongside baked ham or roast turkey this holiday season. On the sweet side, enjoy this wholesome and cozy dish by itself or serve it over plain yogurt with granola for breakfast. For dessert, try it with candied pecans and caramel sauce over vanilla ice cream (are you drooling yet?). The possibilities are truly endless! 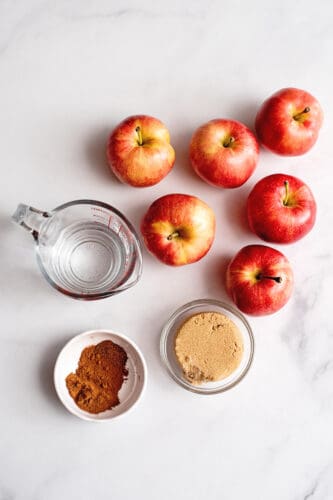 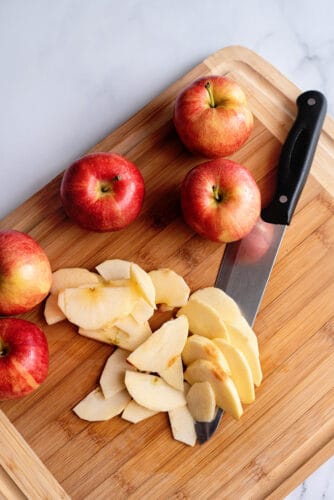 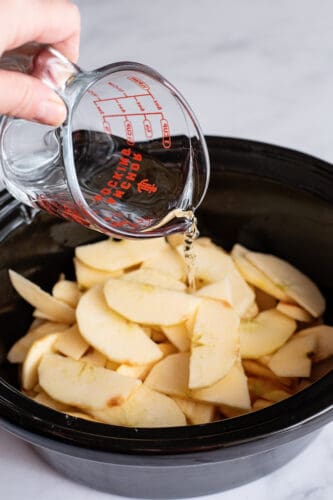 Place them into the crockpot and cover the apples with water. Cover and cook on low for 6 to 8 hours, until the apples are soft and easily break apart. 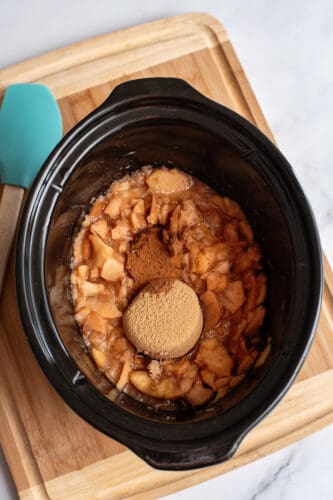 Add the brown sugar, cinnamon, and nutmeg and stir them into the apples. 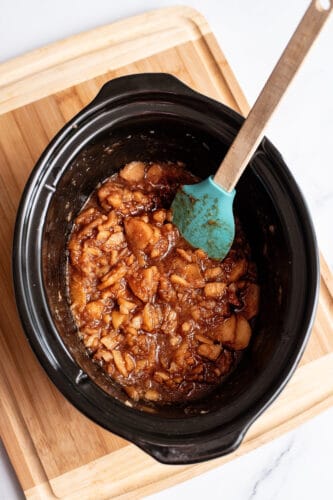 Cover the apples again and continue cooking for 30 to 60 minutes. 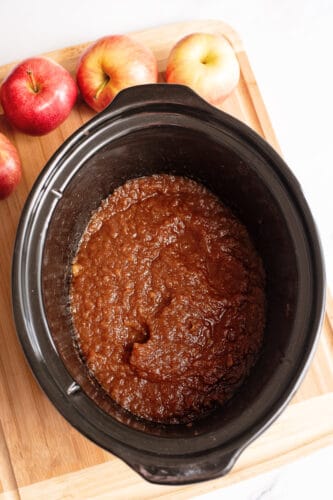 The applesauce is done when the apples break down after being mashed up with your handy dandy potato masher to make the sauce nice and chunky as you like it.

This recipe is designed to make chunky homemade cinnamon applesauce. Want it a little thinner? To thin that applesauce right down, if you want to be fancy puree with an immersion blender or just use a hand mixer, or run it through a food processor. 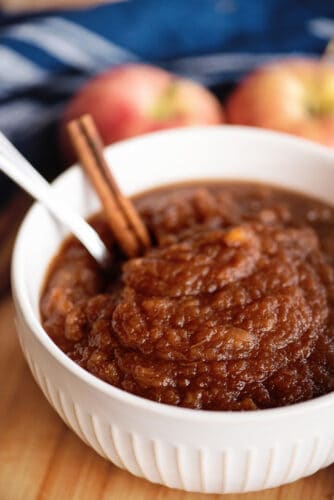 The applesauce is best served warm.

Is this applesauce good for babies?

Yes, you can totally feed this homemade applesauce to babies. You will just want to follow the steps above to puree the applesauce, so it’s a thinner consistency and easier to eat. Ensure you cool before serving too.

Do you have to include sugar in this applesauce recipe?

You can definitely control the amount of sugar in this recipe. I like how the spices and brown sugar combine to bring out the sweet tartness of the apples. But if you prefer, omit the sugar entirely or only add a small amount.

What other spices can you use?

Other spice options for this recipe include clove, apple pie spice, pumpkin pie spice, or allspice.

How do you serve cinnamon applesauce?

As mentioned, there are so many ways to use this homemade cinnamon applesauce. Serve it as a savory side dish with your favorite meat, substitute oil for this applesauce when baking, blend it into your next morning smoothie, or use it instead of maple syrup on your next stack of pancakes or waffles. The sky is the limit! 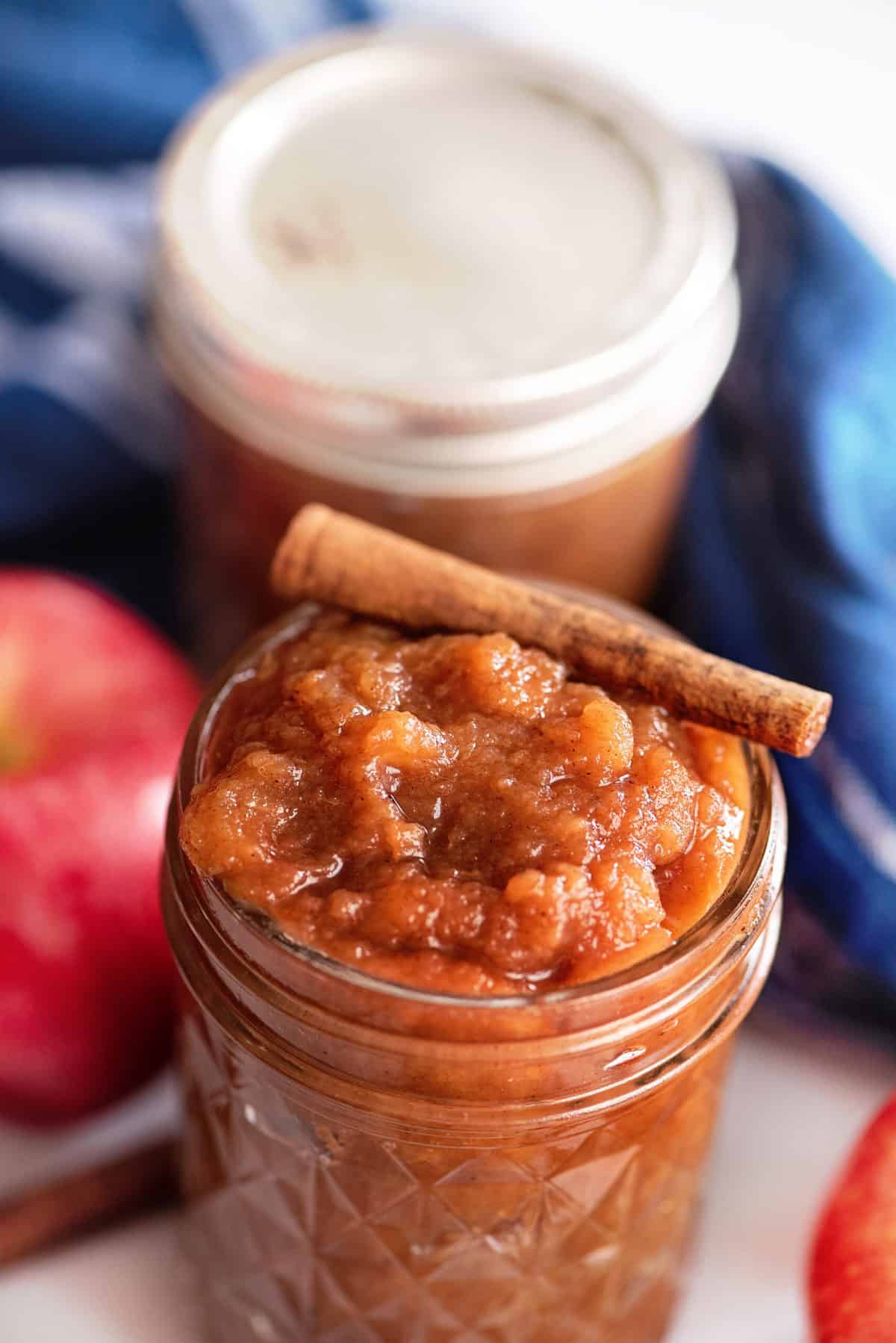 Here are some more cinnamon apple treats for you to enjoy:

Do you have a measurement on how many cups of sliced apples? We have apple trees that have irregular sized apples so I don’t know how they would compare with 5-6 medium sized apples.