Today I got to go meet Nancy Cloud, eighteen year host of a local cooking show on Comcast Cable here in Huntsville, Alabama.

I had planned on getting up, getting the kids off to school, and then working on Southern Plate and the facebook page a bit before needing to be on set at 10:15. That was a great plan, but you know how those go!

My poor Bradybug was sick for a second day, waking up with a fever and really feeling peuny. So he stayed in bed while I looked after them and then got ready as quickly as I could. Ricky’s extremely understanding work let him come home and work from here while I went to film so Brady could rest and get to feeling better. 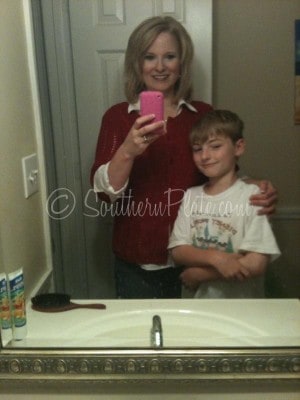 This is me and my precious Bradybug after I was ready. I wasn’t feeling totally up to par but as you can see I managed to have my big hair so we’re go for tv!

Of course, I got there early, as is my custom. This time I was so early that no one else was there! I was happy to have the time to regroup in my car and remembered that I had not eaten breakfast. Fortuntaely, I have taken to keeping a mix of nuts and dried cranberries in my purse so I munched on those while I waited, then had to politely excuse myself to remove the almond skins from my teeth before filming. Note to self: put a toothbrush in your purse, almond skins are hard to remove.

I was thrilled to meet the crew once they arrived shortly after finishing my little breakfast.

Nancy is the sweetest woman and had two of the most precious little dogs. I truly enjoyed filming with her, she has such a natural ease on camera. Her crew was really nice too and we enjoyed a relaxed atmosphere of joking and laughing together during breaks from filming. She said that once the segment is produced she’ll get me a copy of it that I can post up on Southern Plate for  y’all so I’ll be sure and bring that to you when I can.

We had a good time on camera talking about my cookbook, Southern Living, and cooking chicken planks and banana pudding. I mentioned comeback saucce at the last minute and Nancy had all of the ingredients in her kitchen so we whipped some of that up on camera too.

This was the first time I’d ever cooked on a Viking gas range stove top and WOW, was it ever amazing.  I’ve never seen anything cook so evenly and quickly. I can’t see myself ever actually owning one but it sure was fun to play with! Her entire kitchen was filled with droolworthy appliances. I just wanted to go touch them all!

Then, lo and behold, I was gone too long so Ricky was running late for a 1:00 meeting and he texted me to see if I was going to be back in time. Fortunately, we had just barely finished filming and I made my sincere apologies where Nancy assured me it was fine to go. Nancy told me I should have brought Brady with me and invited me back again (she really was a wonderfully kind person) and they were calling friends to come join them in eating the results of the cooking show as I darted back home where I had to go check Katy Rose out of school so she wouldn’t have to ride the bus home alone (Mama shuffling never ends!).

On the way to get her I had three phone calls regarding Southern Plate and arrived to a completely full inbox of emails, including no less than three from folks asking for money after reading about me in Southern Living, lol. Apparently, I’m rich now, but someone forgot to notify my bank.

Thing is, I’ve been rich all along, but in a much more significant way.

And now, its time to get some real work done. I have to get 1100 book plates signed by the time I go to bed tonight and get a blog post done for tomorrow!

WHEW. This is one of those days where you wonder if life is ever going to slow down but can’t help but look back on the day and see it as a good one!

Fortunately, my Bradybug is feeling some better. Hopefully he will be fully recovered by tomorrow.

You have so much fun and exciting stuff going on these days. I don’t know how you keep up.

btw… when this page first loaded and I saw the picture of you and Nancy… I had to chuckle. I remembered your comment about having several outfits that other people put together for you because you are no good at that and reconized that red sweater as one of THOSE outfits. LOL You look good in red.

So… what did you cook on Nancy’s show?

She made chicken planks, banana pudding and comeback sauce. Sounds yummy, doesn’t it? 🙂