These 3-ingredient Golden Grahams treats are made with Golden Grahams, marshmallow cream, and butter. I like to think of them as an over-the-top version of the classic Rice Krispie treat that’s just as sticky sweet and delicious. 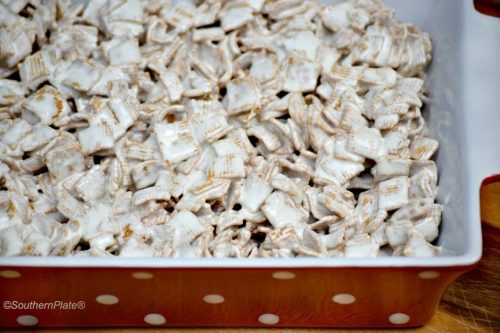 A few years back, I misread the classic recipe for Rice Krispie treats (again, where are my glasses?) and ended up doubling the marshmallow cream and adding a bit of extra butter. The result was FANTASTIC. I immediately applied it to these Golden Grahams treats and couldn’t stop eating them. If you want to take your classic cereal treat bar up a notch (or ten), try this. The result is a whole other animal!

Now, I do recommend cooling the treats before eating, but if you wanna eat it straight out of the pan while warm, I’m not looking 😉. I hope you enjoy these ooey-gooey deliciously sweet cereal bars. 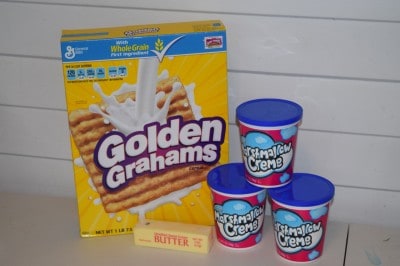 How to Make Golden Grahams Treats 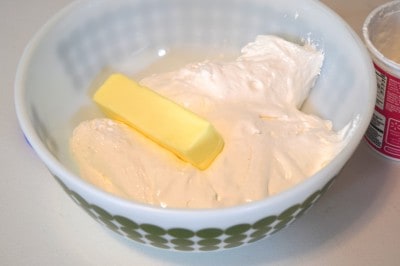 Dump your marshmallow cream and butter in a bowl.

Now you can do this on the stovetop if you like, but I’m not because I don’t wanna.

I just put that bowl in the microwave and microwave it at 30 to 45-second intervals, stirring in between each, until it is nicely blended and one big bowl of delicious buttery marshmallow goop.

I am hesitant to give microwave directions because our microwaves vary so much. It’s always a judgment call on your behalf. But you’re pert dern smart so I know you got this. 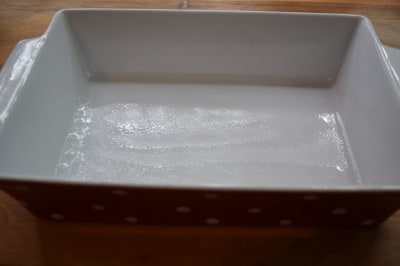 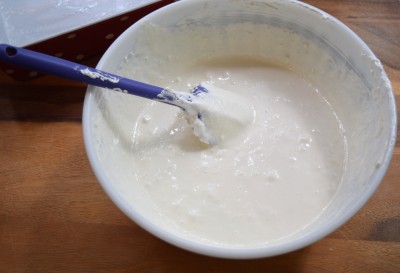 Remember that delicious buttery marshmallow goop we were making? Here it is. Don’t taste it. It is Pure-D horrible and you’ll hate it. Honest. Don’t let your family taste it, either, because between you tasting it (I knew you were going to) and them tasting it, you won’t have any left for the next step.

Now finish licking it off your finger, slap your hand, and move on.

Besides, you can lick the spoon and bowl in just a minute anyway. 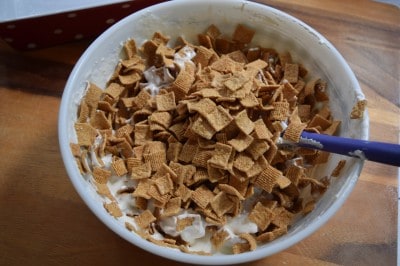 Dump in your Golden Grahams. 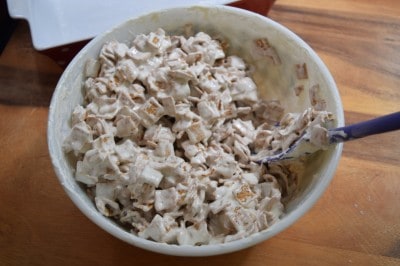 Stir that up until well coated.

At first, it is going to seem like you’ll never get it all coated but then all of a sudden the whole bowl seems to turn white. 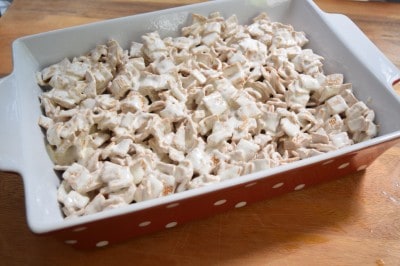 Spread your cereal mixture out into your prepared pan and press it down just a bit.

Not enough to crush the Grahams but to just help them stick together some.

This isn’t going to be a super firm bar like those big honking styrofoam-like Rice Krispy treats you see in coffee shops. These bars will still have some give to them and taste fresh even a day later.

Enjoy your marshmallow treats (and believe me, you will).

Leftover gooey Golden Graham bars will last up to a week when stored in an airtight container at room temperature. However, fresh is best when it comes to these cereal treats, so I do recommend trying to eat them within a few days if possible.

Can I use mini marshmallows instead?

If I were me (and it just so happens that today I am), I would just go buy marshmallow cream because I think that is one of the secrets to this recipe being so stinking good and it is only about a dollar a container.

Can you make cereal treats with other types of cereal?

You betcha! I personally love to make this recipe with Fruity Pebbles. But other great options include Cocoa Puffs and Cinnamon Toast Crunch. Let your imagination run wild!

How do you make a Golden Graham smores bars recipe?

For the s’mores effect, you can add up to 1 cup of mini chocolate chips to the bowl when you microwave the marshmallow fluff and butter. Then follow the remaining instructions. The milk chocolate chips (or semi-sweet chocolate chips, whatever you’ve got) combined with the Golden Grahams and melted marshmallow cream gives you that s’mores taste without the campfire! 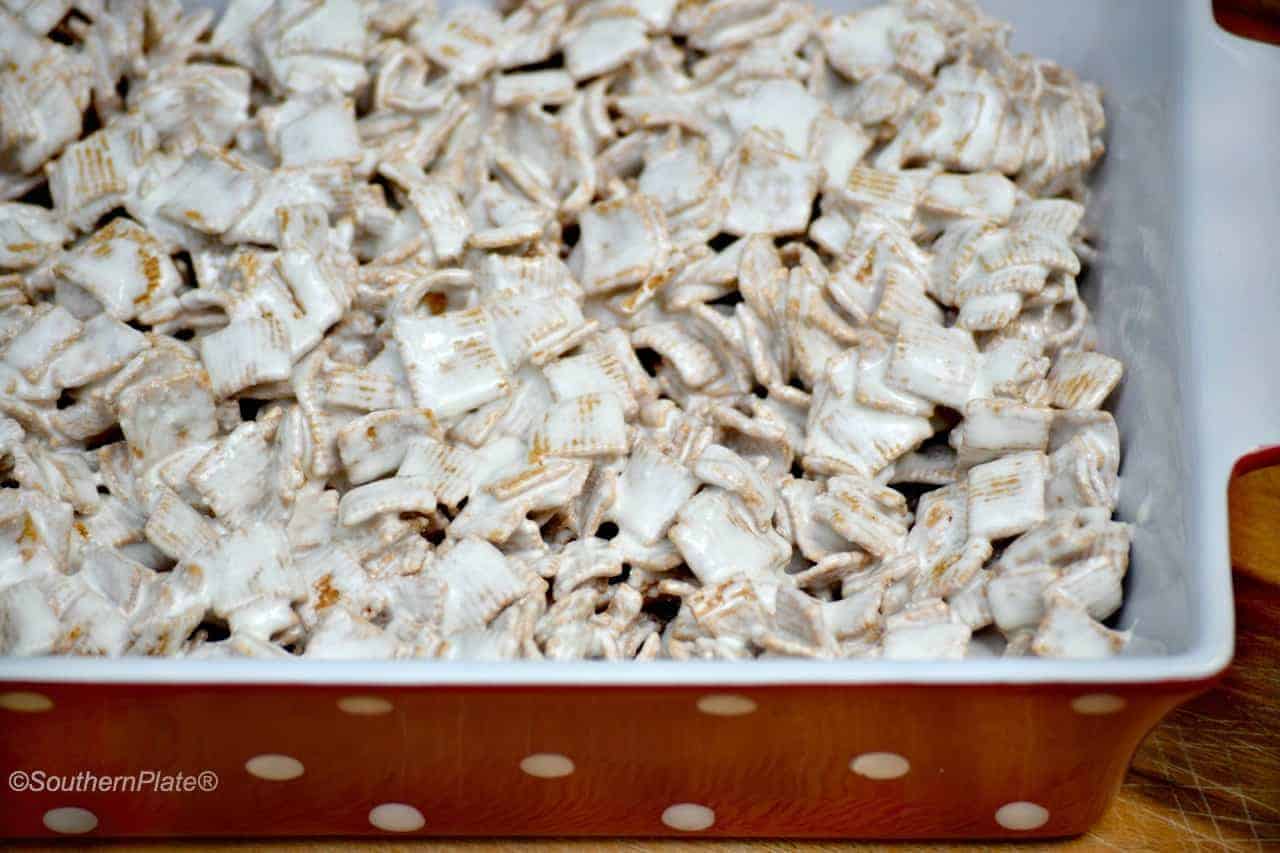 My daughter makes these with Cinnamon Toast Crunch cereal!

This stuff right here … well, it’s awesome! I cannot tell you how many times I have made a third of a batch just for me@

Ok. I must have done something wrong. I have looked over the recipe and can’t figure it out. I made these. The first night, they were delicious! The next day they were tough with no crunch.

That is bizarre. Maybe it was the cereal you used?

Is your microwave really volcanic? It may be that the marshmallow overcooked, which makes it really tough and hard to eat. Perhaps if you melt the butter a bit first and then add the marshmallow about halfway through, it will melt nicely without getting too hot. I’m planning to try these soon and will likely melt my butter first just to be safe. But it’s good to know they were delicious initially!

I have this cereal in the pantry…and halloween is this week … the grandkids will really like these especially if I add some of those little chocolate pieces they like………..so thanks again Christy!