Disclaimer: This post isn’t sponsored by Chick-Fil-A, I’m just a crazy fan of their Super Food Salad so I developed a recipe for myself that is close enough for me not to tell a difference if my eyes were closed. 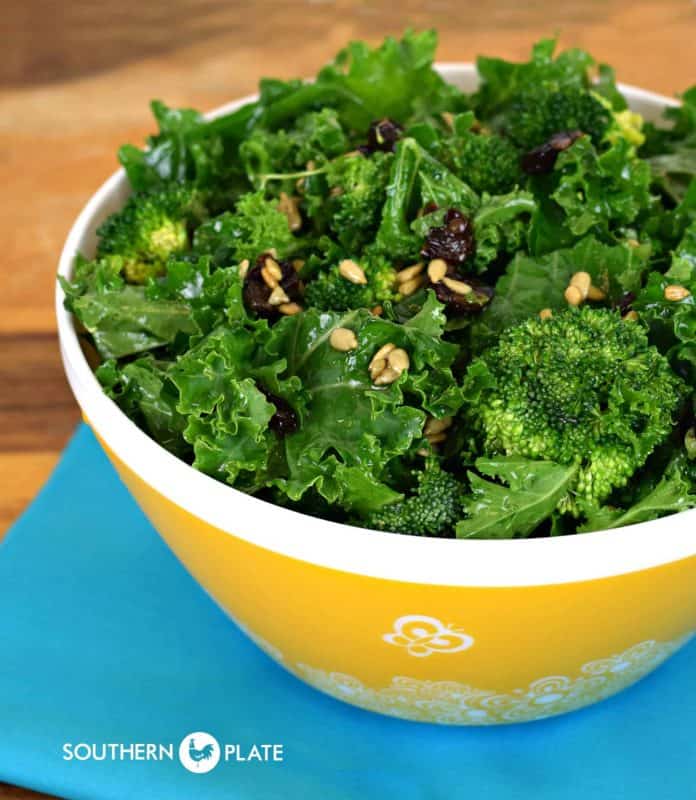 My daughter’s favorite place to eat in the world, aside from our home, is Chick-Fil-A. We usually eat there on the night she has choir practice since that is a night the entire family seems to be scattered to the winds.

So when they switch up their menu, I have a chance to check out the new stuff pretty soon after it’s debut. The latest craze is their Super Food Salad and let me tell you what, it was love at first bite. I could live on that stuff! So you know I had to have a go at duplicating the recipe at home. I want to be clear, right out of the gate, that this isn’t Chick-Fil-A’s recipe. I have never seen their recipe and I just developed my recipe from the ground up based on the menu description. However, to my tastebuds, they are twins, maybe not absolutely identical, but twins just the same.

So if you are in love with the superfood salad they serve there like I am, here is how you can make it at home on those days where you may not be heading in the general direction of Chick-Fil-A but you still have a need that deserves to be filled.

Oh and this, this is another reason why I am so familiar with their menu du jour…

We also have what we call “Chicken School” from time to time where I pack up our homeschool materials and we find us a booth at the local chick fil a for breakfast. After breakfast, we start on our school work and finish up around lunchtime, which we then have there (of course) before heading back home. The fun thing about Chicken School is how welcoming our local Chick-Fil-A spot is. They refill our drinks while we work, ask if there is anything else we need, and tell us to let them know if we do. The crazy thing is that Katy enjoys it so much that she hasn’t noticed we get twice as much work done on those days! 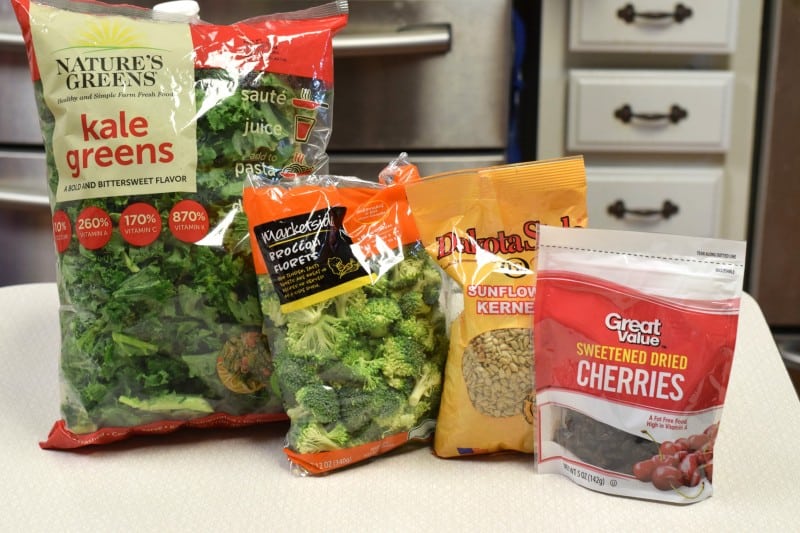 *Chick-Fil-A does NOT use sunflower kernels. They use a roasted nut blend which seems to be almonds, pecans, and walnuts, but you don’t see a lot of those and I wanted more nuts throughout, plus sunflower kernels are cheap :).

I was so tempted to add in matchstick carrots, shredded cabbage, etc, but decided to keep it simple and try to stick as close as I could (aside from the nuts) to how Chick-Fil-A does it. I’m glad I did because this salad is stinking awesome.

Also worth noting is that Chick-Fil-A uses broccolini. I had to look that up. Sounded like baby broccoli with aspirations or something. Turns out it is some Italian broccoli with smaller florets and larger seeds. Either way, to me it was just another veggie putting on airs so I settled for plain old broccoli, already in a bag, already cut. And you see that big old bag of Kale? It was already cut, too, and cost me less than $3. There was enough to make this salad twice. If you decide to make one serving and save the rest of the Kale, just put it in a zipper seal bag with one paper towel and store in your fridge. That paper towel in there will keep it fresh and crispy for twice as long. Works for lettuce and such, too. 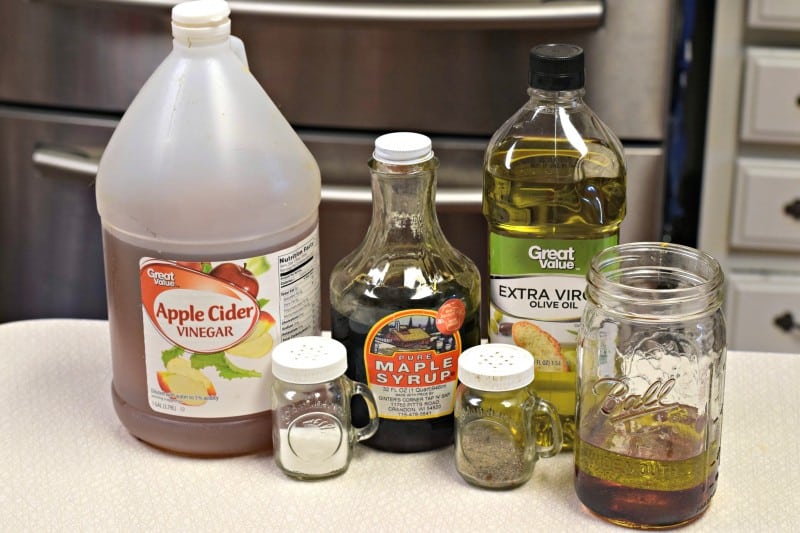 Now y’all, I’m using my famous Maple Syrup from Ginter’s Corner Tap N’ Sap again. You may recall how I fantasized about getting my daughter married into their Maple Syrup Dynasty over in my Maple Pecan Pie Post. I’m still working on that…

The big old mason jar contains my dressing ingredients. I’m about to put a lid on it and give it a good, hearty shake. If your kids walk in while you are doing this open your eyes real big and growl while shaking it. They will scatter to the winds until you call them back into the kitchen for supper and you’ll have a little “me” time :). 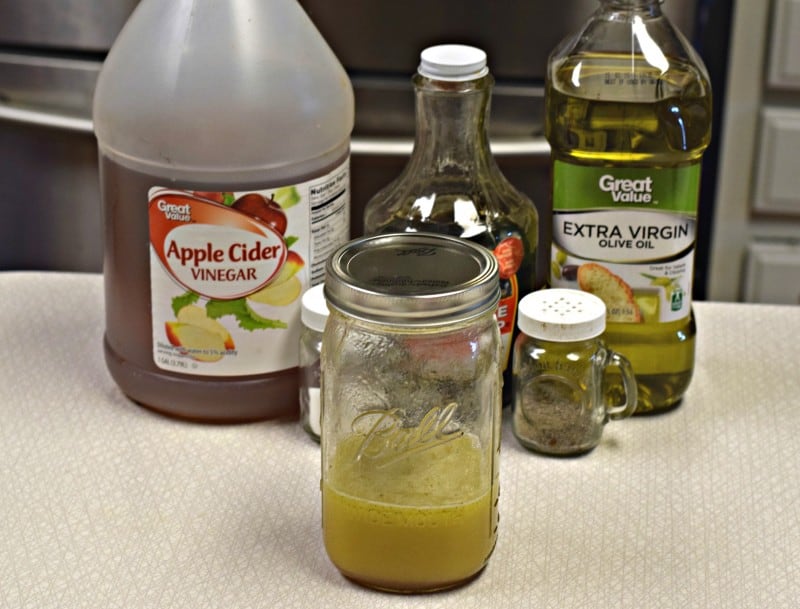 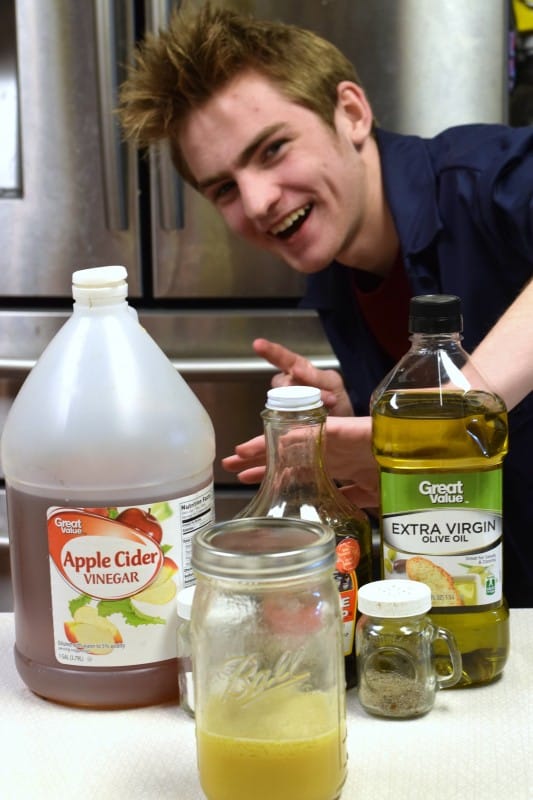 Oh look, there’s Brady! You don’t see him around on SouthernPlate much these days so when I was taking photos and he leaned in for a bomb it felt like a rare treat for me. I’m hoping you’ll see more of him after this school year as he’s decided to join us at home, customize his studies (more programming and pre engineering classes), and finish up high school with an advanced degree in one year rather than two. It’s amazing what you can do when you don’t have to stay behind a pace car, just another reason why I love homeschooling :).

Disclaimer for the people o’ the internets: No insult is intended towards anyone who doesn’t homeschool or any schools, public or private, that currently come to the mind of whoever is reading this. Please note that it is possible to say something that compliments a choice without it being a statement degrading a different choice. Just like saying someone is pretty is not saying the rest of the world is ugly. If you find yourself offended, please click here and read this post. Now let us get back to the food part…

Put all your stuff in a bowl. Pour dressing over. Stir it up real good. Eat it real good. Enjoy!

Store this in the refrigerator, covered. Best if enjoyed within the first two days of being made.

I love this stuff and can see myself making it weekly, especially since it is so easy.

To my tastebuds, I hit the mark with this recipe – but that’s not saying I won’t spin through the drive through to get my fix should the need arise.

If you have a Chick-Fil-A near you, I highly recommend this side dish with your next meal! If you want to be like me when you grow up (we’ll discuss your misguided aspirations later), you can order a plain grilled chicken sandwich, superfood salad, and a large Diet Dr Pepper. Be sure and ask for a pack of ketchup and put that on your sandwich because that is how I roll! 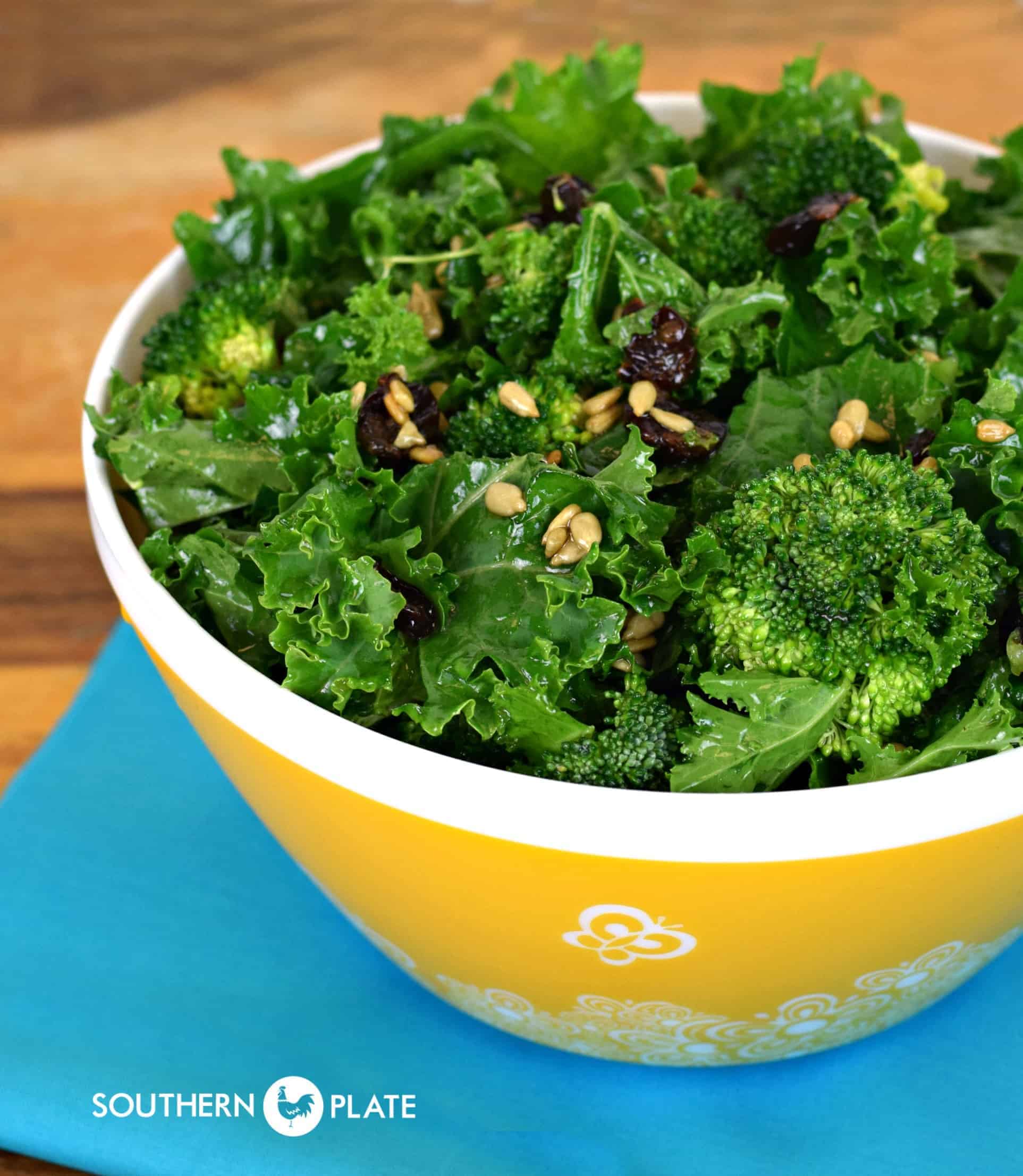 Don’t worry about the people who aren’t happy for you.

They probably aren’t happy for themselves, either. 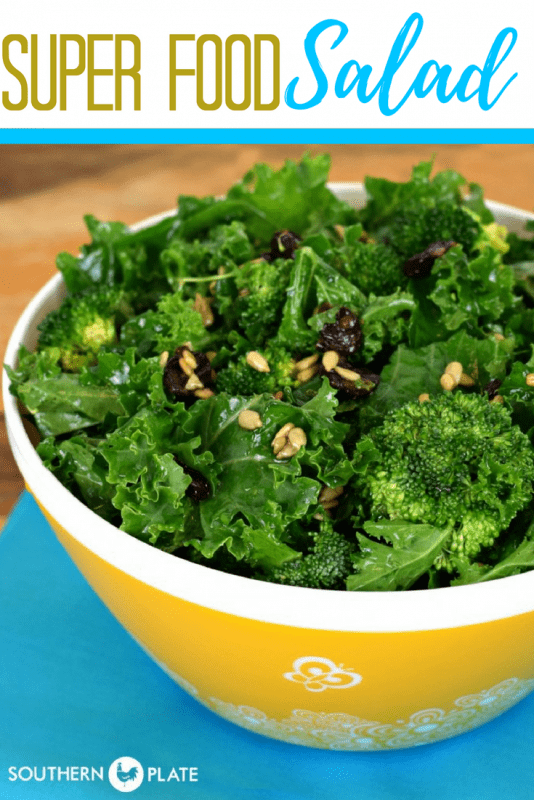 This looks so good! I am making up an order for curbside pick up at Walmart, so I added the items I need for this salad. I hope to make it this weekend! Thank you for all you do!

I really don’;t care for maple syrup. Could I use honey instead?

I can’t have sugar. What could I use to replace the sugar or should I just leave it without a sweetner?
Thanks,
Robin L.

You could use any artificial sweetener that you like and it should work just fine.

Christy: Made your Superfood Salad for dinner last nite thinking there would be plenty left for our Easter late lunch/early dinner today. Wrong!! Had to make another batch after church to accompany our grilled chicken! My husband had 3 big bowls and said “I could eat just this and nothing else!” High praise from a man who loves his dinners. And lunches…and… There was not one scrap of kale, broccoli, nor anything else left in that giant bowl. I’m calling it Better Than ChickFilA’s Superfood Salad & suspect it’s going to be making a regular appearance on our table. Thank you and happy Easter to you and your family.

That is the highest kind of praise and it just made my day!! I a man so glad to hear it was a hit and y’all loved it as much as I do!!

Could I use Craisins for the dried cherries. I believe they would be less expensive….

Christy, I just ran out of maple syrup. Could I use sugar or honey since or would that be too sweet? Also, I love chick fil a. My favorite is a spicy chicken deluxe sandwich well done fries, and an Arnold Palmer. I sometimes like to go there and read scripture on my phone and eat peacefully.

I think honey would be an excellent substitute 🙂 And agreed on the peace there! 🙂

I guess missed this the first time you posted it (or was it an April Fools recipe?) I had not seen this salad on the menu at the local CFA. Sooo, I thought it was new. I went to CFA today especially to try it. Here in Tallahassee CFA only has their Cobb, Market and Santa Fe salads. Will just have to get the ingredients and try your recipe.

This isn’t served as an entree salad but a side dish. It replace the carrot raisin salad in my area. I hope you get to try it soon! No April Fools 🙂 Have a great day, Charlie!