We are animal lovers, every single one of us. As  result, we have some of the most loved on fur babies you could ever meet. We even foster animals from time to time, so far only cats, but we take them in and love on them until we can help find them homes.  Truly, if I could just get to a point in my life where it was even a tenth as good as my dogs and cats have it, I’d be living in the lap of utmost luxury.
But pets are for spoiling, we all know that 🙂
As a result of having such a large extended family, keeping the water bowl filled is sometimes challenging. It’s not just the amount of water everyone drinks, you also have to take into account the water olympics: One dog drinks water, the others hear him or her and go to watch, thinking to themselves “Oh wow, Zoey sure makes that water look good. I sure do want some of that…” and the drool starts to come out of their mouths. As soon as Zoey (the big’un) is done, the two little’uns  break into a race for the bowl. Two little heads pop in at the same time trying to drink up as much water as they possibly can before the other drinks it all (because there are only two gallons there, oh the horror!) and the cats watch in mixture of amusement and annoyance at the juvenile antics of dogs as they, too, begin to develop a sudden craving for some fresh, cool water.
Then, of course, filling the bowl sparks another round of water bowl fever as everything with four legs hears that water being poured and comes running to try out the “new stuff”.
So goes the day.
But one very special bowl presents the greatest challenge because it is never filled for more than a minute or two at a time and the real treat is to get to drink from THAT bowl.
I call it, the enchanted water bowl.
This story is all about that bowl.
A while back, I was in the kitchen and my oldest cat, Daz (a.k.a. the communicator) came in and gave me that “I need something and you haven’t provided it” howl. I was busy and didn’t think I’d refilled the water bowl yet so knew it may be getting low. As the oldest ranking pet in our home, Daz demands only the freshest water and will not drink water from a bowl once all of the other pets have had a taste of it. So I pulled out the first vessel I could find, which happened to be a 4 ounce ramekin (a great size for one cat), filled it from the sink, and placed it on the floor.
Daz looked up at me and I swear if he had eyebrows he would have arched one triumphantly at the special treatment. He ambled over and began delicately drinking, taking his time to make sure the other cats arrived to see him receiving such special treatment. Once done, he stood there a moment, looked up and around as slowly as he could, and then victoriously meandered away, leaving them with this leftovers. The other cats were quick to approach and sniff the bowl, wondering what magical waters their senior had been given and then, one by one in order of rank, they took turns finishing it off. Not a drop was left.
The next day, right after I had filled the biggest water bowl, Daz came into the kitchen, sat down by “his” bowl, declaring that he needed his enchanted waters.
This time, the dogs took notice and as Daz finished up drinking out of that tiny 4 ounce ramekin, two cats and three dogs stood in some sort of formation waiting on him to grant them leave to fight it out over the rest.
I rolled my eyes. Not three yards away was a very large Pyrex mixing bowl filled to the utmost brim with the exact same water.
“But it’s not the same” they seemed to whisper among themselves, “This water is special”.
The cats were able to share a bowl but the dogs had to have it refilled for each one. And so it goes now. I make sure they have fresh water in the large bowl, but from time to time one of the critters will come to me when I am in the kitchen and stare longingly into the enchanted water bowl, then look at me pitifully, pleading for the magical waters that somehow taste so very different despite the source being exactly the same.
And I smile and fill it, realizing that they really aren’t very different from humans after all. 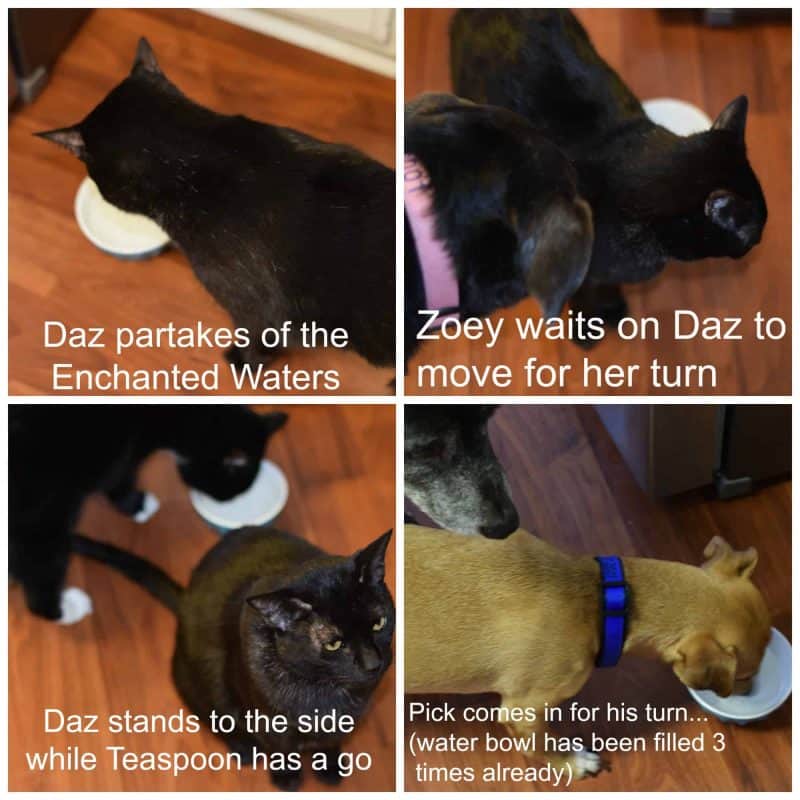 Love your cat story – thanks for sharing. I recently purchased a home and a momma and baby cat adopted me. Love my new fur babies! They too have a special water bowl.

Congratulations on your new home and new additions to your family!!!

I fostered cats for five years, Dachshunds for seven years and your story sounds so familiar.

My cat will only use her water bowl when absolutely necessary. She has come to prefer freshly drawn water in the bathroom sink basin 🙂 She is a princess with a discerning palate….or just a picky kitty 🙂

Love CATS! They are so smart and independent! I babysit my daughters 18 pound Maine Coon and they have an infatuation with water. Presley will slap the water bowl to watch it bubble up but he also after eating sticks his paws in the bowl as if he is washing up. He wets his paw and licks the water from his paw instead of the bowl. He is one spoiled mess of a fur baby

We have ESP when it comes to our animals Christy we can read their minds and I’m happy to oblige. I know you feel the same

Cats are funny about their water bowls..

They sure are Deborah, it always makes me laugh!

We are down to one cat right now, but he is just as picky as Daz. While we were away we set out a large bowl of water to be sure he had plenty to drink. When we came back we just left the bowl out and it has become the preferred water bowl. He lets us know when the water level is lower than he prefers and when the water needs to be refreshed. Nothing is wrong with his normal water bowl which sits by his food bowl, but the much larger bowl of water that is in a different room contains special water.