If you use Facebook or Pinterest, I’d really appreciate it if you could use one of the buttons above! THANK YOU! 🙂 Now let’s make some Country Chowder! 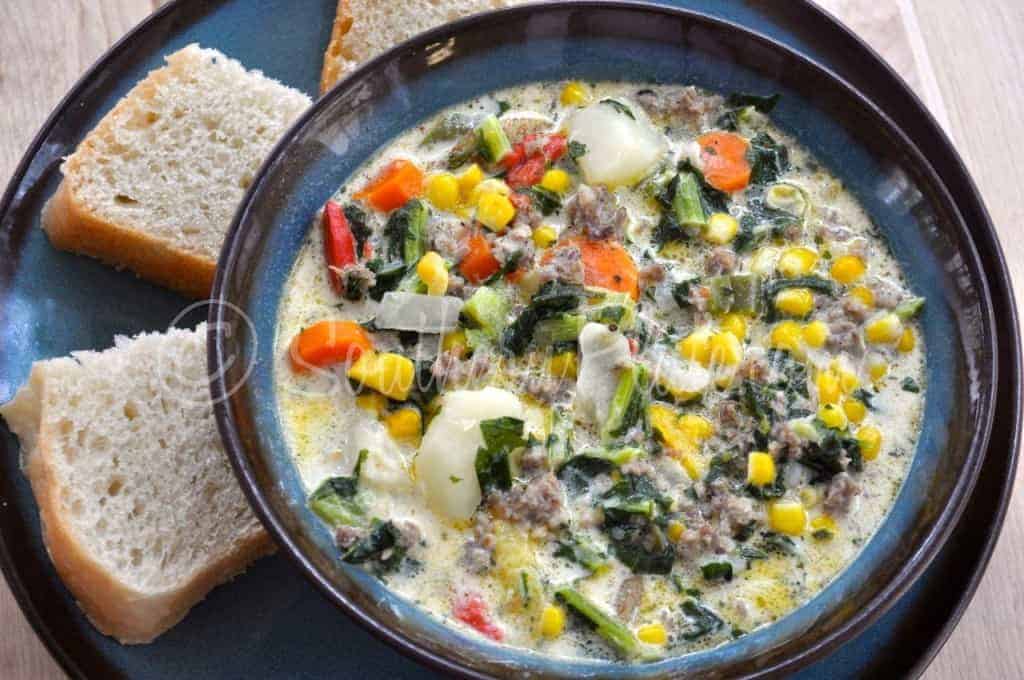 This is it! Today we have our first, honest to goodness chilly day. There is a glorious crisp wind blowing and I sent both of my kids off to school wearing jackets. I dug back in the far recesses of my closet and came out with a sweatshirt and a comfy pair of jeans that haven’t seen daylight for months. As soon as I put them on we all just sighed happily together. AHHH Fall . So now we need a warm and soothing meal to go along with it. Today’s recipe is one I have named Country Chowder. I took some of my favorite flavors and cooked them up together in a rich and creamy broth filled with flavor. This is a hearty meal that just makes your stomach happy and it’s even better the next day! 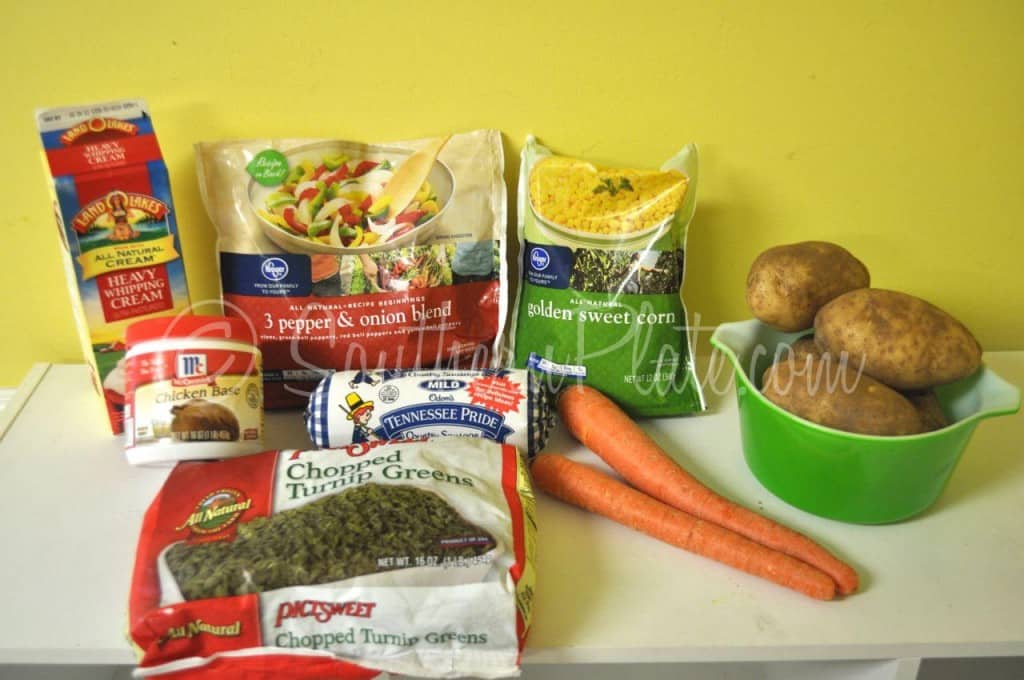 For the country chowder you’ll need: Heavy Cream, frozen pepper and onion blend*, Corn, potatoes, carrots, a roll of breakfast sausage*, chopped turnip greens*, and some form of chicken broth as a cooking base*.

Substitutions are a plenty on this recipe!

*Pepper and Onion Blend – I use frozen because a bag is just a dollar and I get three colors of bell pepper strips as well as onions so this saves money and gives me variety. If you’d rather use fresh, just chop up 1/2 an onion and 1 bell pepper (any color) as a substitute.

*Breakfast Sausage – if you want a slightly spicier soup, use hot breakfast pork sausage. I’m using mild. You could also use Italian sausage and substitute the dried Parsley with dried Italian seasoning for a different flavor direction.

*Turnip Greens – Spinach will work just as well or you can omit the greens entirely.

*Chicken Broth – I’m using a chicken base paste which makes 2 quarts of broth with just 1 1/2 tablespoons of base! I often use things like this or bouillon cubes to save money and storage space. I also like that I can make my broth more concentrated if I want for even more flavor. However, you can use actual chicken broth if you like, or any of the things I use. Exact quantities are in the recipe at the end of this post.

Don’t like carrots or corn? Leave ’em out! Don’t have russet potatoes? use red! Don’t have heavy cream? Heavy cream is best but evaporated milk and even whole milk will work as a substitution. 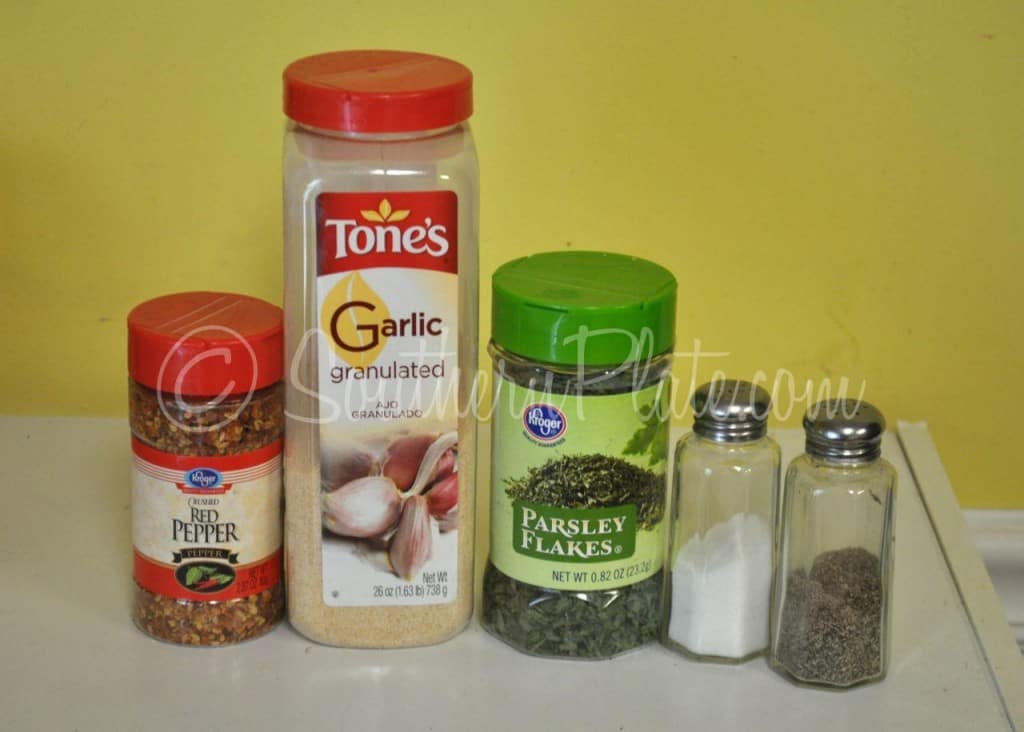 Potato flakes are the handiest things to use as thickeners in soups and stews. I love them in my mama’s chicken stew and they are even part of the crust in my Taco Casserole. I even use them to feed my sourdough starter! The only thing I don’t use potato flakes for is making mashed potatoes 🙂 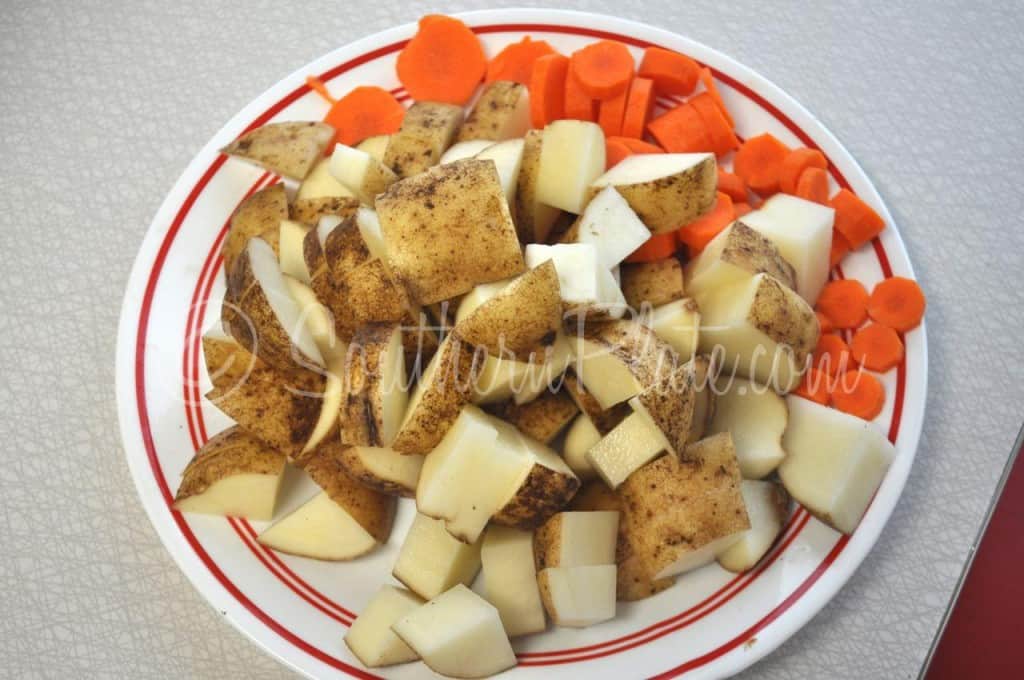 I like to leave the skin on my potatoes but you can peel it off if you prefer.

Another shortcut when making Country Chowder is to just use a bag of frozen cubed hash browns and even frozen carrots! 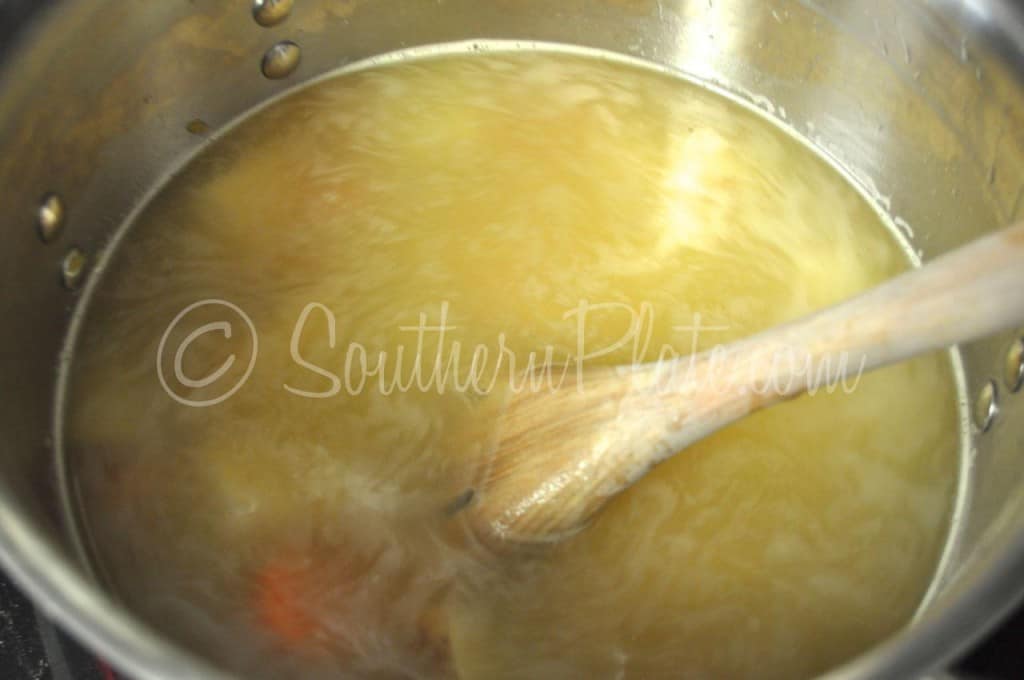 Okay this is my chicken broth all assembled. Add your potatoes, carrots, and onions. 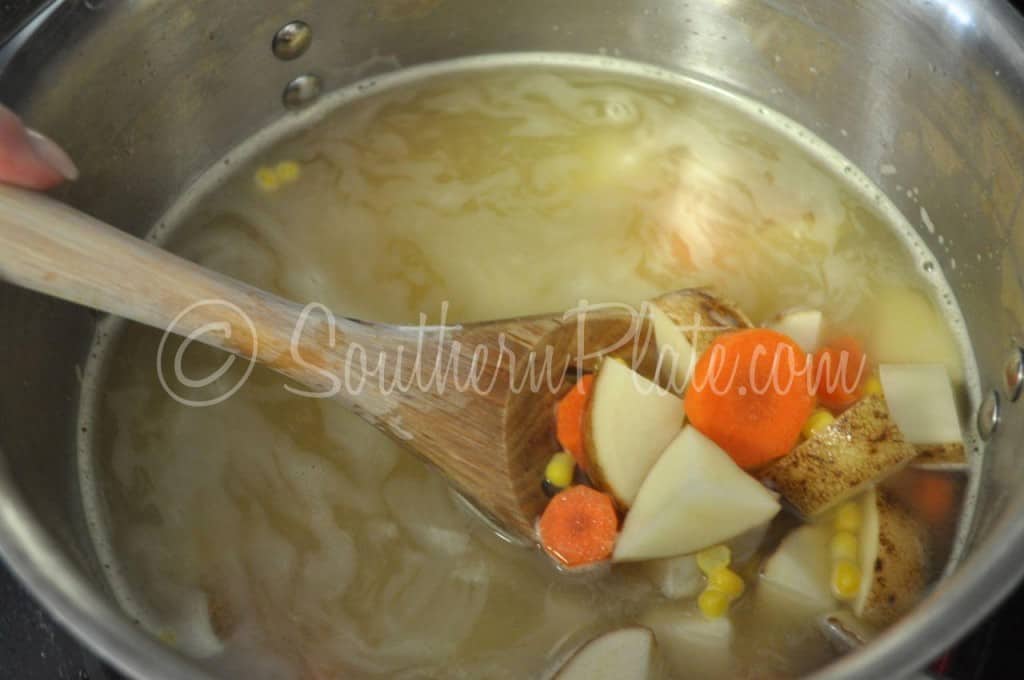 See? Put this over medium high heat and bring it to a light boil, stirring every now and then, while you prepare sausage. 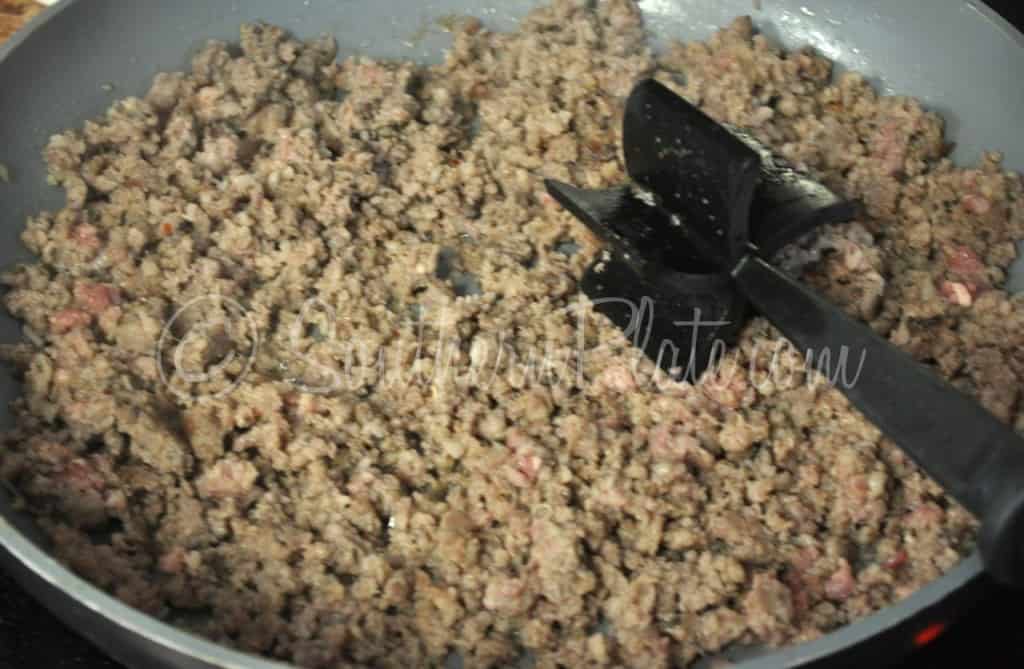 While that is cooking, chop up and brown sausage in a large skillet over medium high heat until it is fully cooked and no longer pink in the center. 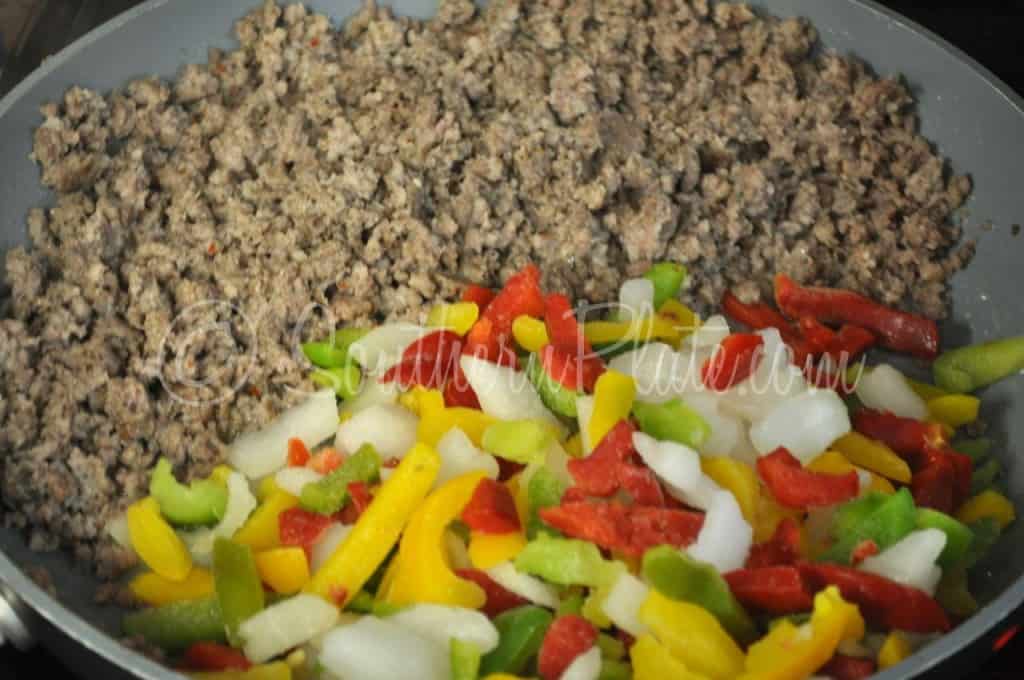 When your sausage is cooked, push it to the side of the pan and add in frozen pepper and onion blend.

I love this frozen pepper and onion blend!

Let that cook for a few minutes, stirring every now and then, until completely thawed. 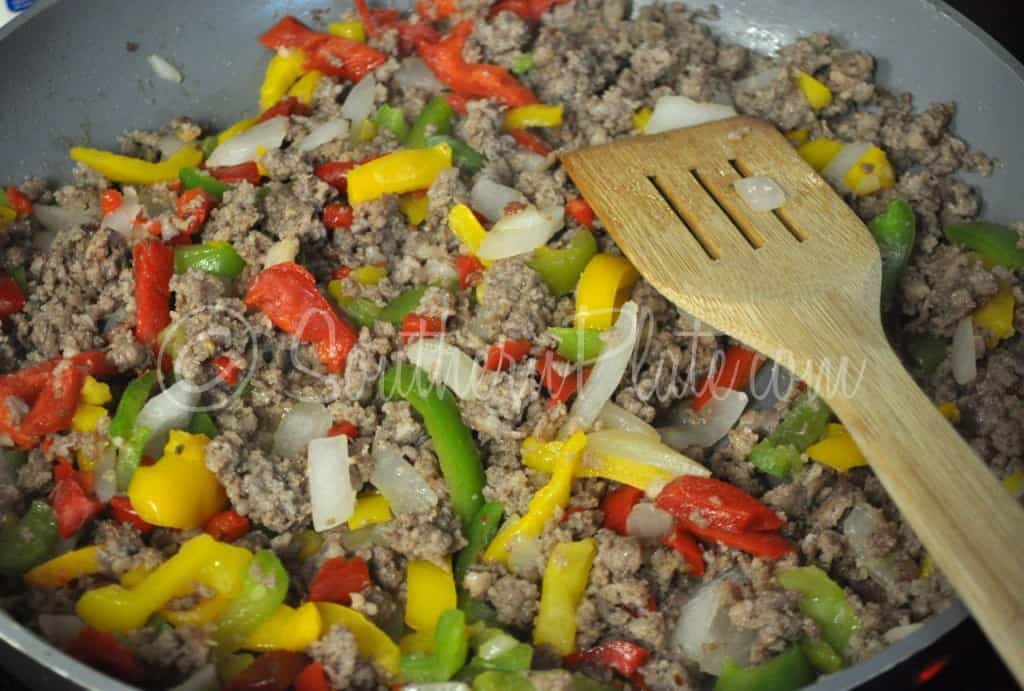 Once it’s thawed, stir it up good and continue cooking until tender, three or four more minutes. 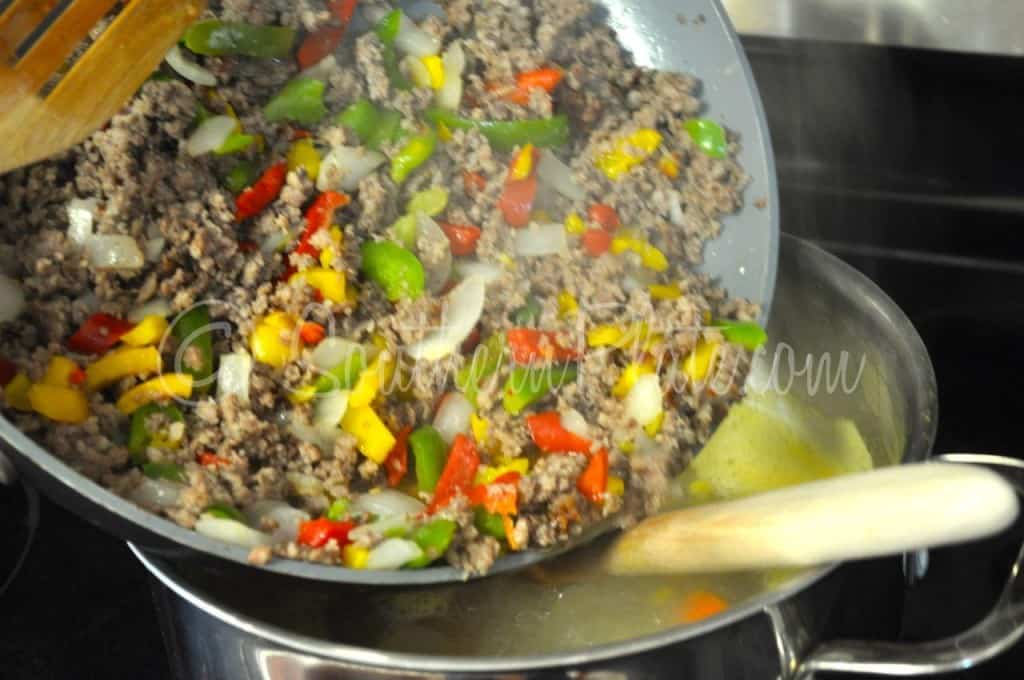 Add that to your pot.

If your potatoes and carrots aren’t tender by this time, it’s okay, they’ll keep cooking. 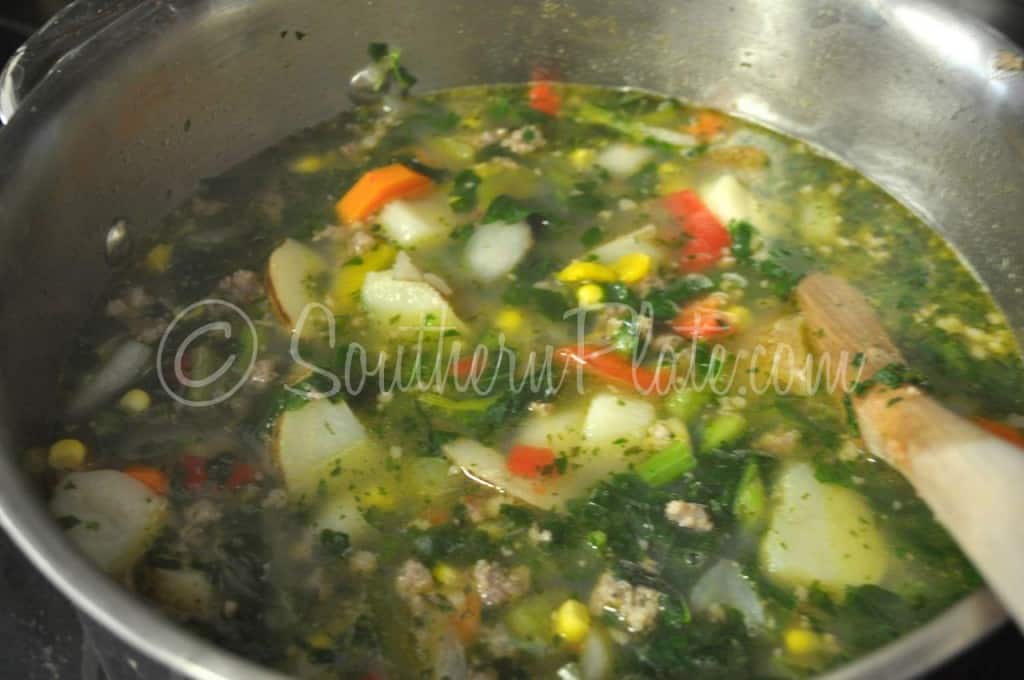 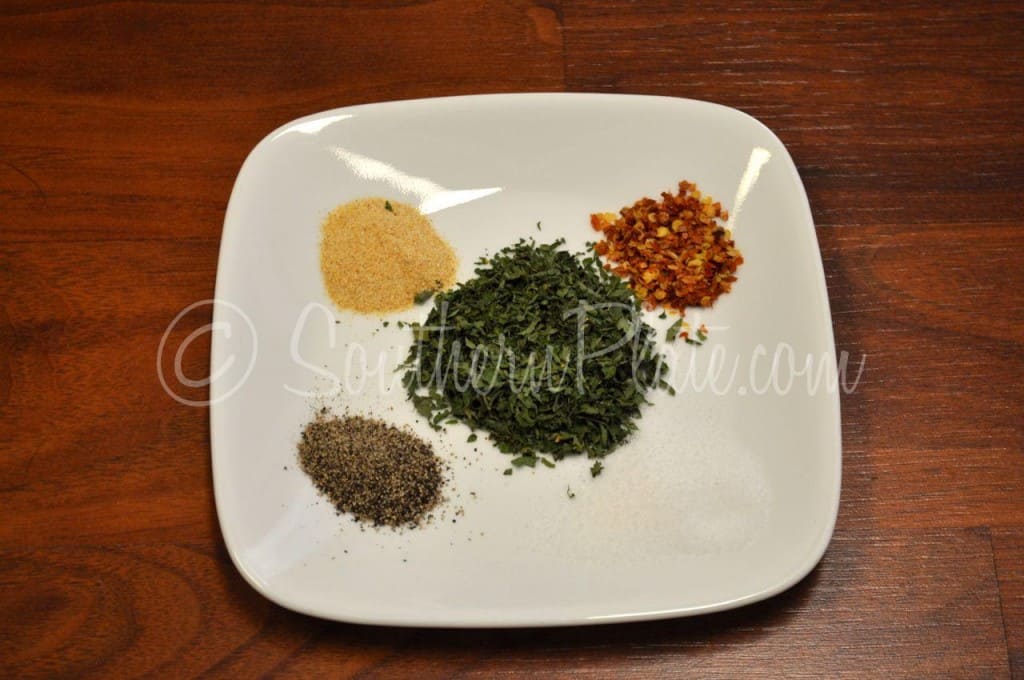 …and all seasonings and stir well.

Bring it to a light boil once again and let simmer for fifteen more minutes.

My salt is camouflaged in this photo but it is in the bottom right corner.

Y’all know the other day when I told you I was excited because we were getting new floors? Well guess what? This is them! I was looking for a place to take a photo of this plate and looked down and thought “Well the floor is awfully pretty!”. You’ll probably see a lot of photos of plates on my floor over the next few years 🙂 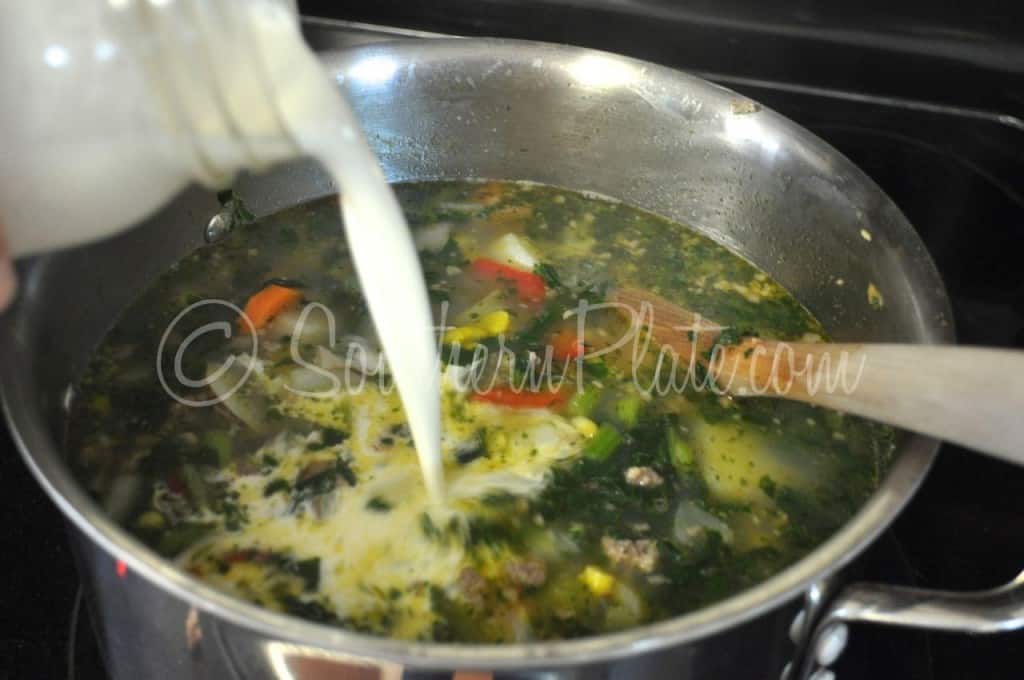 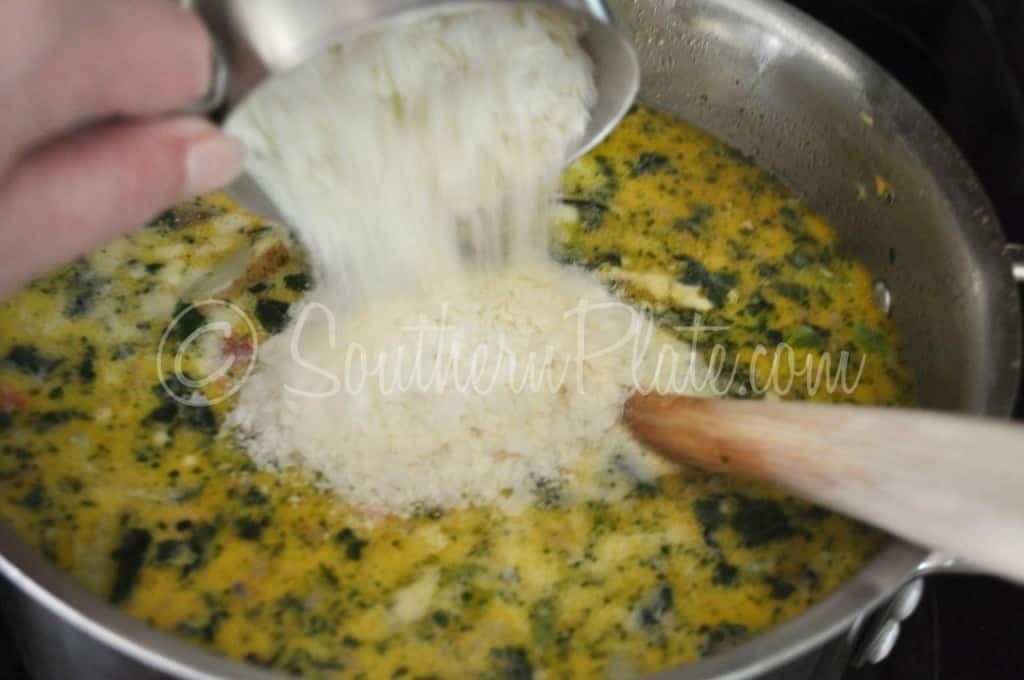 Even better the next day! 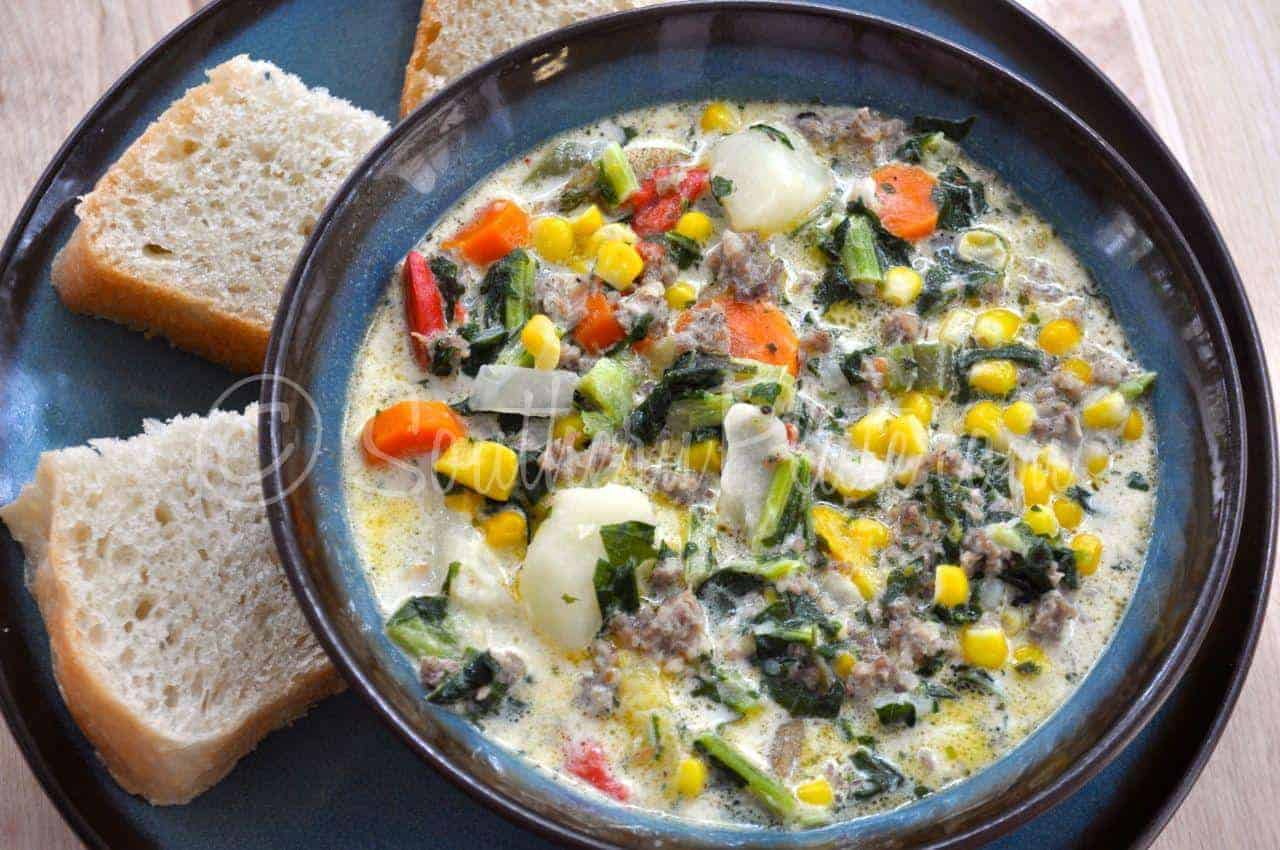 Serve hot with a hearty bread. Leftovers are even better the next day.

“When you carry out acts of kindness you get a wonderful feeling inside.

It is as though something inside your body responds and says, yes, this is how I ought to feel.”