This is part two of my sister in law’s freezer and mega cooking class! Visit part one here.

Thank you for supporting Southern Plate by telling your friends to visit as well! Friend to friend is the best way to help Southern Plate grow!  Gratefully, Christy 🙂

On this day, I made, Hashbrown Casserole Deluxe, Ham and Broccoli Quiche, Potato Soup, and Beef Burgundy Stew.  As before, clean the kitchen, gather all of your ingredients recruit some help and go! 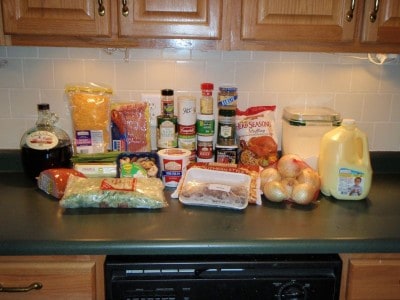 I began with the Ham and Broccoli Quiche and the Hashbrown Casserole Deluxe. 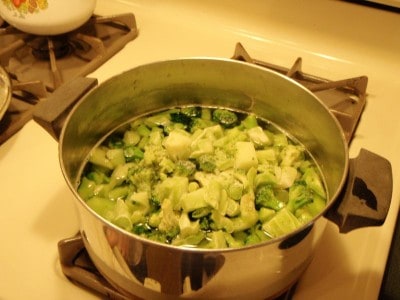 Put you frozen broccoli in a pot, cover with water and bring to a boil.  I bought “cut broccoli” instead of the chopped because I wanted cut for the Hashbrown Casserole and chopped for the Quiche.  You can chop cut broccoli but you can cut chopped.  Plus it gives the kids something to do when they ask, “Mom, can I help?”

Christy’s note: Tina lost me with the whole cut/chopped broccoli thing. I think she knew I’d be putting this post up before my coffee and did it just to toy with me. ~rubs her eyes~ 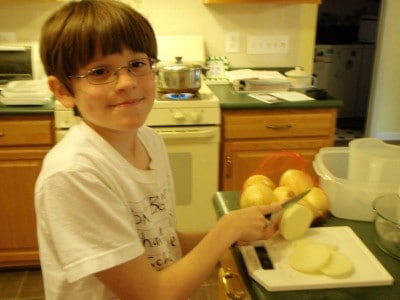 Then you farm out the eye-watering job of cutting up the onions.  My son loves to help and he has become a pretty good little chef.  So good in fact, that when he goes camping with his Boy Scout troop, they all ask if he is going to do the cooking.  Be sure to tell the person who is doing the cutting how you want the onions cut.  I like my onions cut in rings for the Burgundy Beef stew and diced for everything else.  I gave my son two bowls so he can keep them separate. 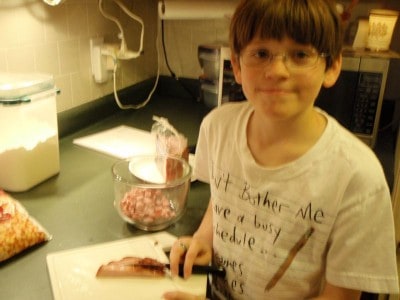 Then get someone to dice up the ham.  I divided up the ham and told my little helper to keep the two amounts separate and the rest of the ham I froze for later. 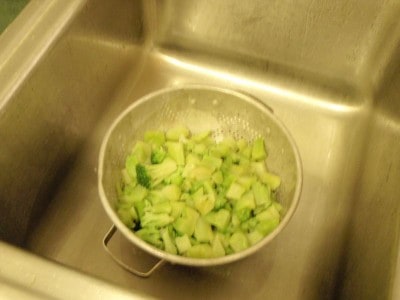 Drain the broccoli and divide it up in to the amounts you need. 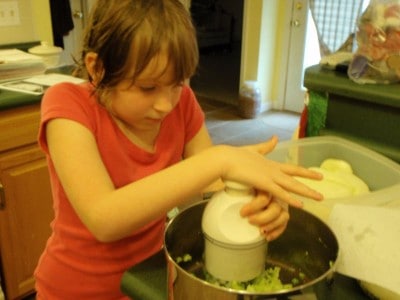 Get your other helper to chop up the broccoli.

She likes using the chopper-thingie so I let her go to town with it. 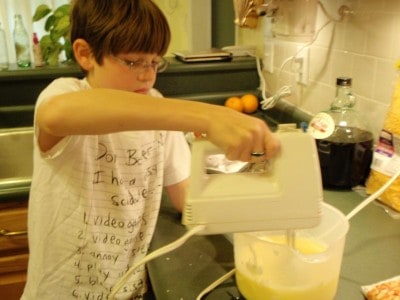 Crack the eggs in another bowl.  Add the milk and sour cream and beat with the mixer.

The kids are good for doing that too, but alas, when all the “fun” stuff (using knives, cracking eggs, and using the mixer) is done, they magically disappear. 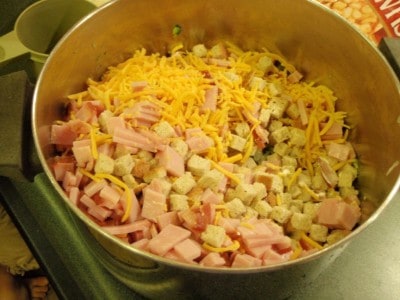 Oh well, it was good while it lasted.  Anyway, add the diced ham, a handful of the chopped onions, the cheese and 5 cups of the stuffing to the chopped broccoli.  Stir well.

(I took the picture before I add the onions so just pretend you see them in the picture.) 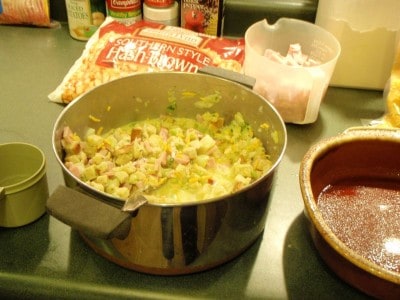 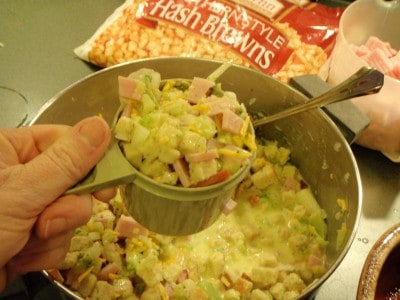 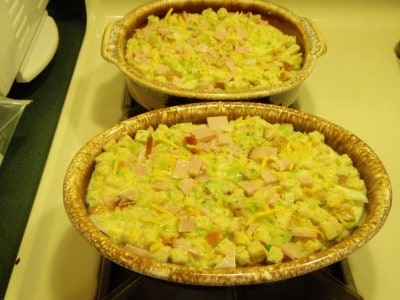 Cover with foil and bake for 30 minutes.  Then I moved on to the Hashbrown Casserole. 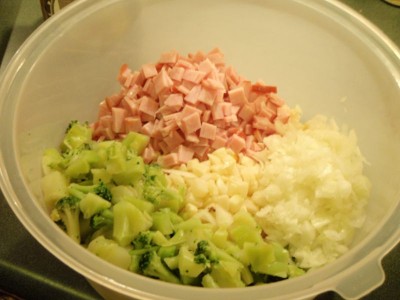 Put the diced ham, cut broccoli, onions and Hashbrown in a BIG bowl.  I am using the top to my cake pan. 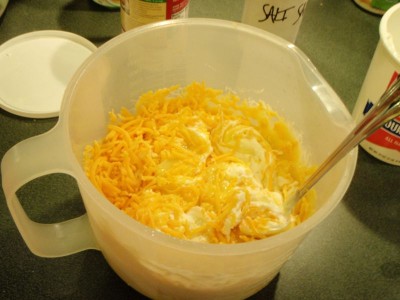 In another bowl, add the 2 cans of cream of chicken soup, sour cream and cheese.  Mix well. 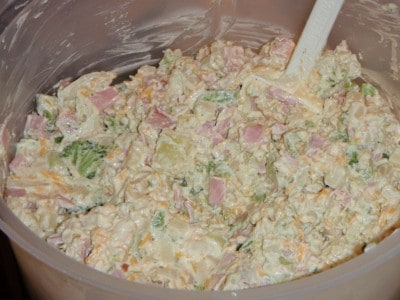 Add the soup mixture to the big bowl and stir really well. 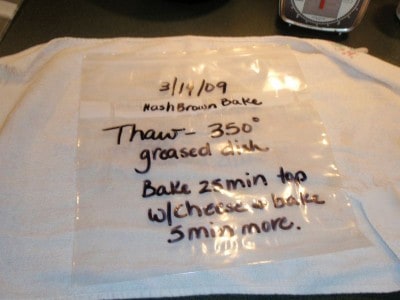 Mark you plastic freezer bags before you fill them. 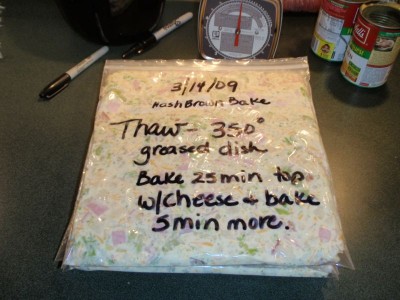 Use a measuring cup to divide it up between the three bags.  Seal, remove as much air as you can, flatten it out and stick it in the freezer.

Two down, two to go. Stop a minute, take a break, clean up a bit and then start again. This part took me about 1 hour to do.

Christy’s note:  This is my favorite method of freezing casseroles because it takes up so very little space! Once frozen, you can stack the bags up like bookends to save even more room in your freezer.

Note: Below Tina makes Potato Soup AND Beef Burgundy Stew at the same time. Please note that you are seeing photos of two dishes cooked simultaneously rather than simply one meal. 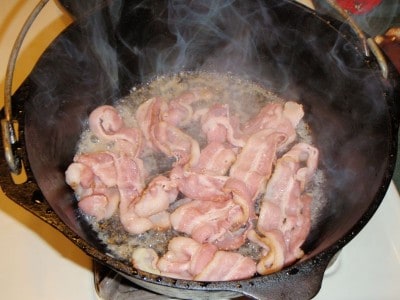 This is where my camera started giving me fits and I go distracted and screwed up a few things, so I apologize for not have a bunch of pictures for this part.  I divided up 1 package of bacon between a cast iron Dutch oven and a stew pot (to get Beef Burgundy Stew started and Potato Soup). 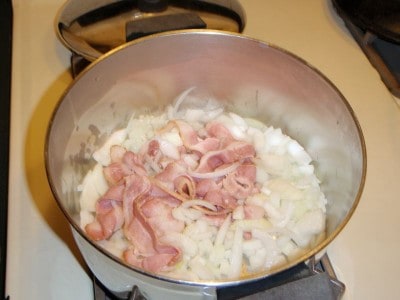 I also added the diced onion to the stew pot.  Then the phone rang.  After I got off the phone, I realized that I should have diced my bacon before I tossed it in the pots.  So remember, diced up the bacon first, then add it and don’t answer the phone.  It was just some telemarketer and I can’t stand those kinds of phone calls and I got distracted and messed up.  But anyway… 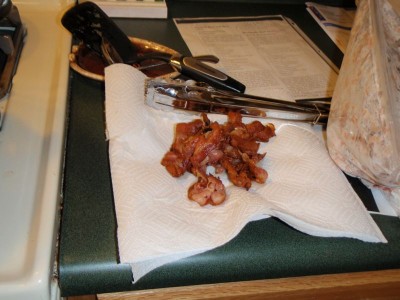 Get the bacon browned and onions tender and then remove from the pans and set aside.

Leave about 2 TBSP of bacon grease in each of the pans. 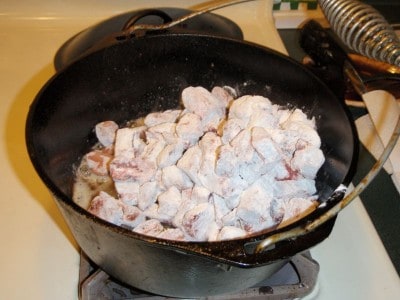 Toss your tenderloins in flour and add to the bacon grease in the Dutch oven. 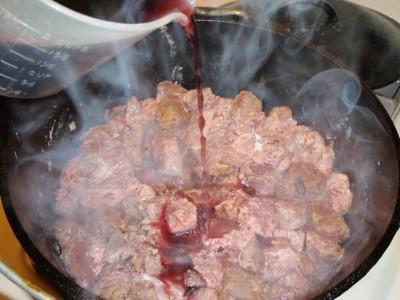 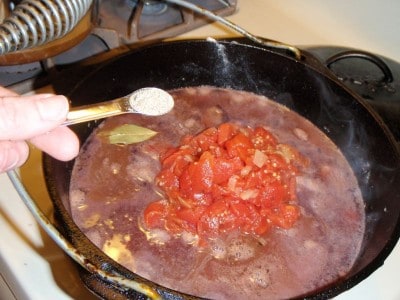 Add can of tomatoes, bay leaf, garlic salt bouillon, thyme and pepper.  Stir well and heat to boiling.  Cover and simmer for about 30 minutes.  Then transfer to a 300-degree oven and bake for 1 hour.  If you don’t have a cast iron Dutch oven, lower the heat as low as it will go and simmer for 1 hour stirring frequently. 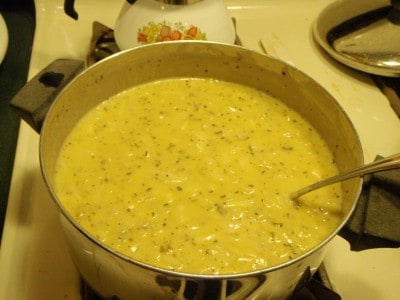 While that is baking / simmering, go back to the other pot.  Use a whisk to stir the flour and chicken bouillon into the grease.  S-l-o-w-l-y add the water to the flour-bouillon mixture and cook for about 2 minutes stirring constantly.  (This is where the camera started freaking out, so use your imagination. Sorry!) ~frowns~ Cook and stir until the mixture thickens.  Add potatoes, milk parsley, basil salt, garlic and pepper.  Simmer for 3 minutes stirring often.  Add the cheese and stir until the cheese is melted.  Divide up into two “Glad” bowls, label and freeze.  I did get the camera to do something but the color is not real great.

Now you can clean up a bit and sit down for a few minutes until the timer goes off.  Remove the Dutch oven from the oven and add the mushrooms, onions, and potatoes.  Stir well and return to the oven / simmer on low for another 2 hours.  Slow cooking makes the meat really tender.  This is especially important when you are using really lean cuts of meat, like deer.  Deer meat has just about no fat at all and the added tomatoes are a natural tenderizer.  Slow cooking also helps tenderize it.  Finish cleaning up and relax.  Dinner will be ready in 2 hours.  Divide up the stew between 2 “Glad” bowls, label and freeze.  There is still one more step to do.

Make a list or mark on the calendar what all you have in the freezer.  Mix it up so that you won’t have 3 Hashbrown casseroles and the 2 potato soups the last week of the month. That’s it.  You are done!!!  Open up that freezer door and look at all the food that is just waiting for you! 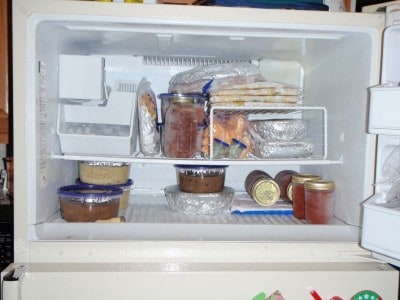 Pat yourself on the back because you just survived your first mega cook.

Bulk Cooking, Freezer Cooking, Mega Cooking, or what ever it is you call it is not really hard at all.

All it takes is some really good planning. The work is in the planning.

If 1 month feels like it is too much, cut it to 2 weeks.  If that still looks like too much work, do only 1 week.

Once you feel more comfortable with it, you will see how much money you really can save and how much time and clean up it will save you.

All the recipes I used this month are listed below, but remember, you don’t have to use any of mine or any in a book. Use the recipes you already know your family will eat. Believe me, you don’t want to try something new, make 4 meals from it only to find out you don’t like it and at the end of the month that is all that is left!

Recipes Tina used in this tutorial:

These WILL be emailed to my email subscribers in printer friendly format!

Brown ground beef.  Drain and rinse.  Add to crock-pot.  Add the rest of the ingredients stir well, cover and cook on low for 6 hours or 3 on high.  Serve over steamed rice.

Almost Homemade Spaghetti Sauce – As Is

Brown ground beef, Drain and rinse.  Add to crock-pot.  Add the rest of the ingredients stir well, cover and cook on low for 6 hours or 3 on high.  Serve over cooked spaghetti noodles.

Christy’s Chicken Stew – As Is


Cook chicken until done in water. Remove chicken from broth and discard skin. Separate meat from bones and shred meat. Dip off as much fat from the broth as possible. Simmer potatoes in 1 cup of broth in covered saucepan until done, do not drain. Mash potatoes slightly, keeping them lumpy. Add corn, onions, tomatoes, sugar, salt, and pepper to broth. Cover and simmer for 20 minutes. Add potatoes and chicken and simmer slowly with lid off for at least 45 minutes. Right before serving, stir in butter and let it melt. Best if made a day ahead and reheated to serve.

Taco Pizza – As Is

In skillet or saucepan, combine ground beef, taco seasoning, refried beans, and salsa. Stir until heated through. Spread into pizza crust. Top with crunched taco chips. Top with a good bit of cheddar cheese. Bake at 350 until cheese is melted and crust is browned. Remove from oven

Frozen direction – Thaw completely in refrigerator and bake as above.

Frozen directions:  Thaw completely in refrigerator and bake at 350-degrees for 45 minutes adding cheese the last 5 minutes.  Or cook in microwave for 15 minutes, stir add cheese and cook for 2 minutes more.

Hashbrown Casserole Deluxe – As Is

Frozen direction: Thaw completely in refrigerator.  Pour into a greased casserole dish and bake at 350-degrees for 45 minutes adding cheese the last 5 minutes.

Ham and Broccoli Quiche – As Is

Burgundy Beef Stew – As Is

Potato Soup – As Is

Frozen directions:  Thaw completely in refrigerator and reheat in a saucepan on low until heated through.  Top with green onions.

I’m not done yet!

I’ll have more money saving tips and great recipes next week in addition to the release of my new ebook to help families learn to save on groceries, save time in the kitchen, and serve their families better meals!

This has been spring break all week and I’ve pretty much worked the entire time (my poor kids!) so now I am off to run some errands with them, get out and enjoy this sunshine I’ve been seeing through the windows, and then take my family to Nashville to spend the weekend with my cousin’s family and enjoy the zoo!

I hope you all have a wonderful Friday and a great weekend! Thank you so very much for taking time out of your busy lives to read Southern Plate!

< Previous Post
Freezer Cooking : How, Why, What, and When!
Next Post >
Eat Out On The Cheap & More Money Saving Strategies!