Today I’m going to show you what may or may not be a first for you – how easy it is to make funnel cakes at home. And by “easy” I mean ingredients that you have on hand, a few minutes of cooking time, and you’re done! And just to take the guesswork out of it and show you exactly what to do, I’ve even made a little video of actually making and frying the funnel cake. See? It’s like I’ve shown up at your door and made myself at home in your kitchen – only better because you didn’t have to clean anything or change out of your pyjama pants :). For the record, I have no problem with a messy house or pyjama pants! 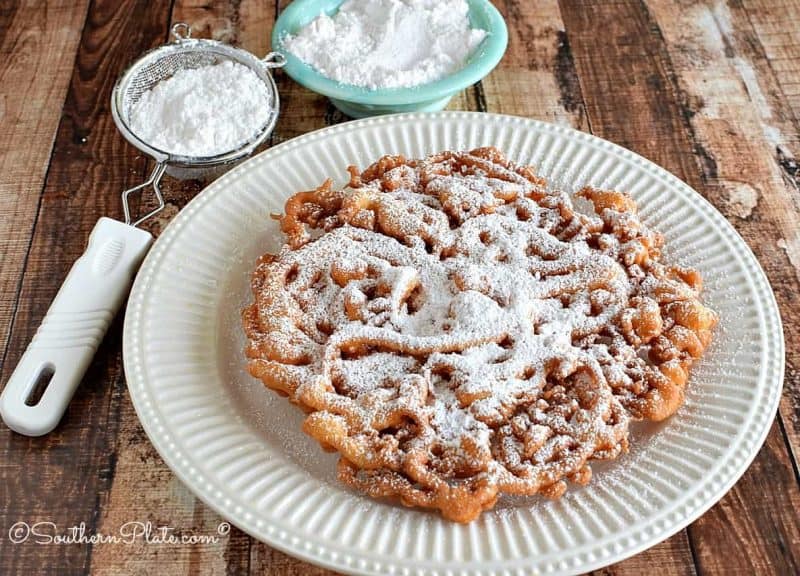 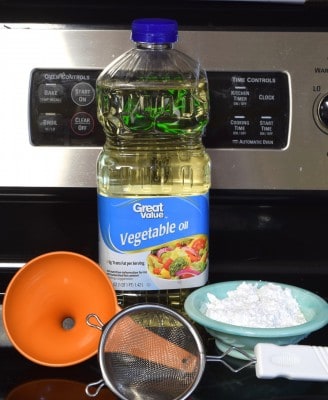 You’re also going to need some oil to fry them in, a funnel, and a sifter of some sort to sprinkle confectioner’s sugar over them. My personal preference for oil for frying these is vegetable (coconut oil) or corn. Peanut oil would also work really well but I don’t use it often due to a few of my daughter’s friends having allergies.

Some people don’t realize they can use coconut oil for frying but you can.  I use the Organic Virgin Coconut Oil, refined.  Some people like the unrefined.  What’s the difference?

Refined coconut oil has one more step in its processing and pretty much take the coconut taste out of the oil.  But because coconut oil has such a high heating point it doesn’t turn rancid quick with heating even when refined, this is a good choice for frying or cooking.   So is the unrefined coconut oil, but you end up with a very coconutty taste.  If you love the taste of coconut then you will like the unrefined choice.

How to Make Funnel Cakes:  Step by Step Tutorial 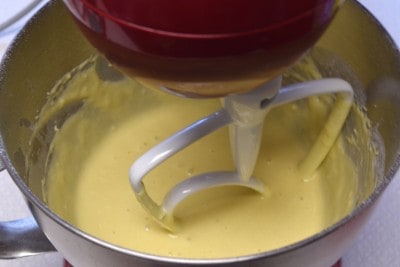 To begin with, place all funnel cake ingredients in a medium-sized or large mixing bowl and beat with an electric mixer until smooth and well blended, this will just take a minute or two. Now you have your batter. See how easy that was? You’ll want to use this batter soon because if you don’t, it will thicken and be hard to come out of the funnel. If that happens, just add 1/4 cup milk and whisk it in by hand.

You can watch me make the funnel cakes in the video below. I’ve also included written instructions as well, though. But this is just one of those things that you kinda need to see it the first time.

Recipe card with instructions is below. 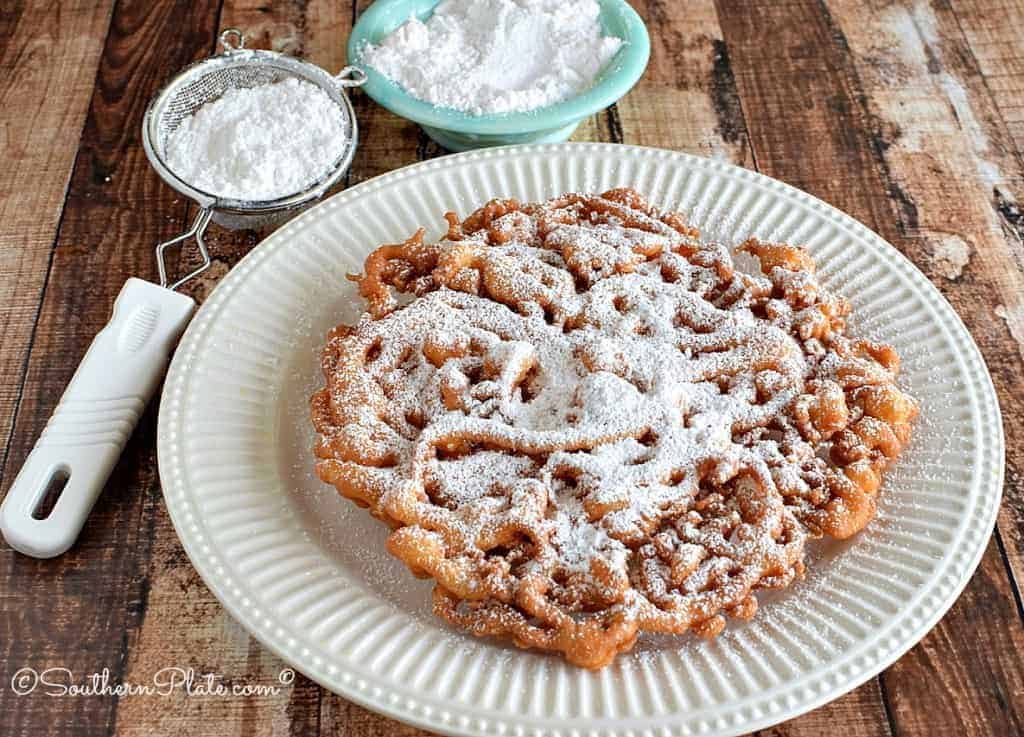 This recipe will make about 4 – 5 funnel cakes.

Is funnel cake made from pancake batter?

What kind of oil is used for funnel cakes?

I personally prefer frying my funnel cakes in refined coconut oil, but any neutral oil will do. This includes vegetable, canola, or peanut oil.

Does a funnel cake need to be refrigerated?

No, funnel cakes are best served freshly fried. However, if you want to store them, I recommend storing them at room temperature for up to two days only, then reheating quickly in the oven.

How do you pour a funnel cake without a funnel?

If you don’t have a funnel, use either a plastic squeeze bottle, a piping bag or carefully pour the batter into the oil with a liquid measuring cup.

How long does funnel cake last?

Funnel cake batter can last in the fridge for up to five days. But once they’re fried, it’s best to eat them within two days. Remember to store them at room temperature.

Why is my funnel cake falling apart? 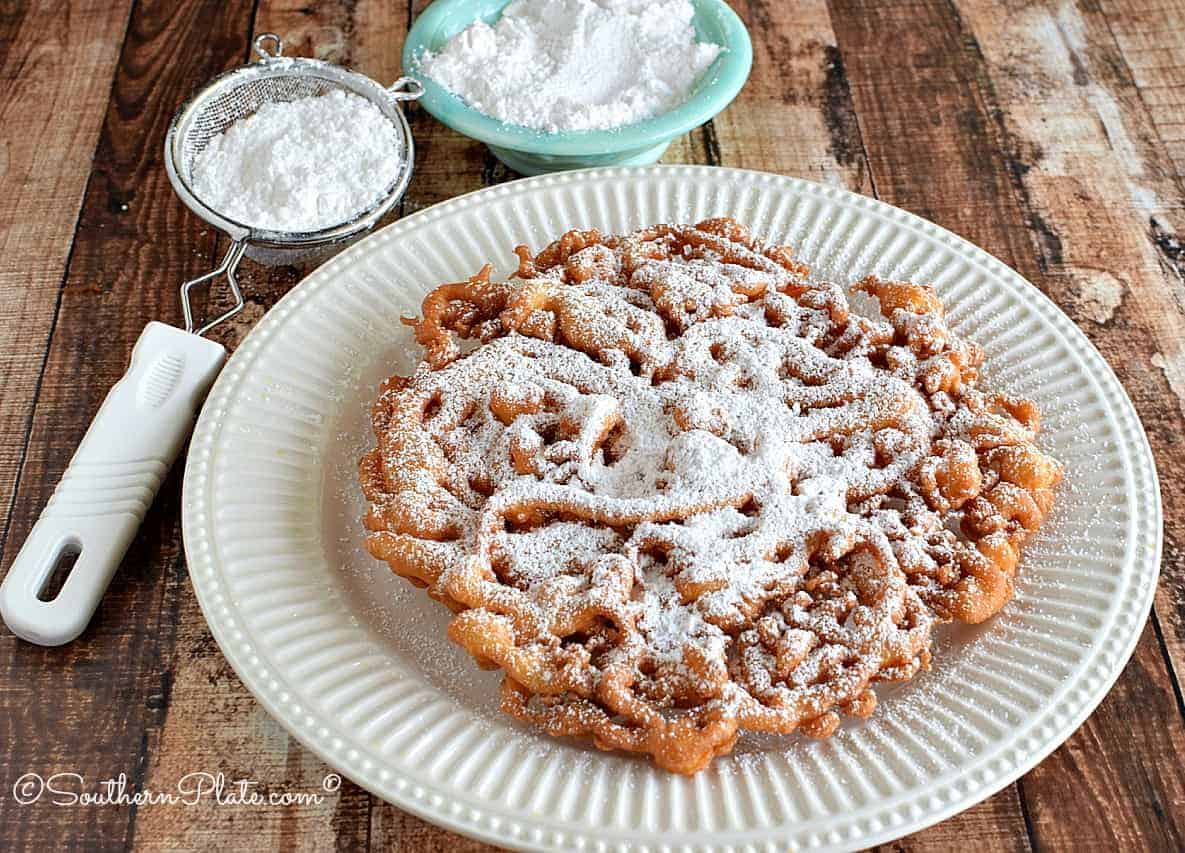 Calories: 524kcal
Tried this recipe?Mention @southernplate or tag #southernplate!
You may also enjoy these cake recipes:
Sock It To Me Cake from Mama
Red Velvet Bundt Cake Recipe Sooo Good!
Fresh Strawberry Cake With Cream Cheese Icing
Chocolate Depression Cake: No Milk or Eggs!
Nothing can stop the man with the right mental attitude from achieving his goal; nothing on earth can help the man with the wrong mental attitude.
~Thomas Jefferson
Like This?
Share it!

I have never had a funnel cake, I have heard of it, seen it. I watched the video, that is so cool, I will be trying soon. Thanks, Shelia

Oh my goodness, you have got to try one Shelia!! I can’t wait to hear what you think!!

I live in Wales, UK & have never heard of this before, but believe me I WILL be making these!
Thank you Christy xx

Oh my goodness Gill, you are going to be amazed!!! I can’t wait to hear how you like them!!

WELL! I made them, I ate 3, one with Icing sugar, one with Strawberry sauce & one with Fudge sauce & it has to be said I now need to go on a diet lol. I made some more when Alice, my daughter came to visit & she loved them too, shame really as I didn’t get my fair share of them that day 😉

OH. MY. WORD. This could be dangerous! Knowing how to make these at home??? My family will love me, my jeans will not! 🙂

🙂 I hope everyone enjoys them!!!

Thank You for this!! My youngest son Loves funnel cakes. We will have so much fun making these
together.

Having fun and making memories, no better way to spend part of a day!!! I hope you both enjoy the funnel cakes Melissa!!!

Isn’t the Internet wonderful I live in Australia and never heard of Funnel Cakes but when my four grandsons come round I’ll certainly try the them. Last week it was green scrambled eggs (their invention) so these should be good.
Love your recipes keep it up.
Linda

How fun!!! I hope you and the boys all enjoy a funnel cake, have a few bites for me!!!

This was absolutely wonderful!! I haven’t had a funnel cake in years so my husband made us a few and we ate them like children! So great! Thanks, Christy for the recipe.

I am so glad you enjoyed them Yecedrah!!!

Does anyone know what appended to the forum Front Porch? I remember when it started but wondered when it stopped. Just got back into SP recently so was surprised to see it gone.

Hi Shannon! Welcome back!! The forum kept causing issues with the main site so I had to take it down several years ago.

I’m a bit late to this party (I like to take my time and enjoy your emails because they are so much fun & informative) but I absolutely cannot wait to make these! Funnel cakes are the first thing I run to when I go to a festival or fair and the idea that I can make them at home has me just about giddy! My daughter will be home this weekend for Mother’s Day and I know she will be more than willing to make these with me. What a fun recipe!

I hope you and your daughter had fun making these Susan, and you had a wonderful Mother’s Day!!

Love your Blog, So informative! I really enjoy your friendly, casual approach to blogging. I feel as though we are just having a nice visit every time I watch. 🙂 I’m going to try the funnel cake recipe. (I haven’t made them in years!) I thought I’d mention something you might want to experiment with–hubby & I went to a festival in Natchez, MIss., last year, and saw a new twist on funnel cakes. They were made with Red Velvet Cake batter, then, just before serving, they squirted a thin cream-cheese icing over it. Oh.My. Goodness. Best funnel cake I’ve ever eaten anywhere. Who knew?!?!
Thanks again for all your hard work. Deb

Oh my word Deb, that sounds so good!!! I am going to have to try that soon, thank you so much for sharing!!!

Fall festivals have started here and gonna make these for the kids at the one at church.

You are going to be the hit of the festival Barbara!!!