Here in Alabama, signs of spring are popping up all round. When spring peeps her pretty little head out, we know that fresh berries aren’t far behind. Grandmama’s Wind Cake is particularly good with fresh berries or on it’s own. It’s somewhat like an angel food cake but truly in a class all it’s own when it comes to taste and texture. It’s also a dream to use in place of shortcake with strawberries and sauce poured over it. 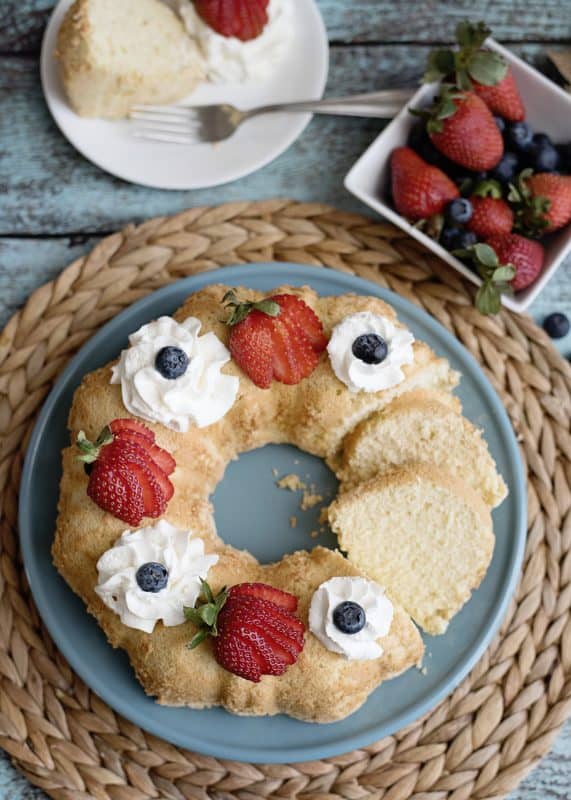 What a treasure this recipe is to me! When I was looking through Grandmama’s old cookbook, I found this handwritten recipe for Wind Cake on a piece of crumbling, yellowed paper tucked inside. Grandmama’s instructions were vague, as they were likely notes she jotted down after a friend explained the recipe to her. I was thrilled to get into the kitchen and flesh them out a bit so I could share the recipe with you in my third cookbook, Sweetness, and today on Southern Plate!

What is Wind Cake like? It’s a spongey cake, that tastes like a hybrid between an angel food cake and a made from scratch yellow cake. It’s simple, lightly sweet, and delicious. A nice coffee treat on it’s own and perfect as a showcase for fresh fruit. 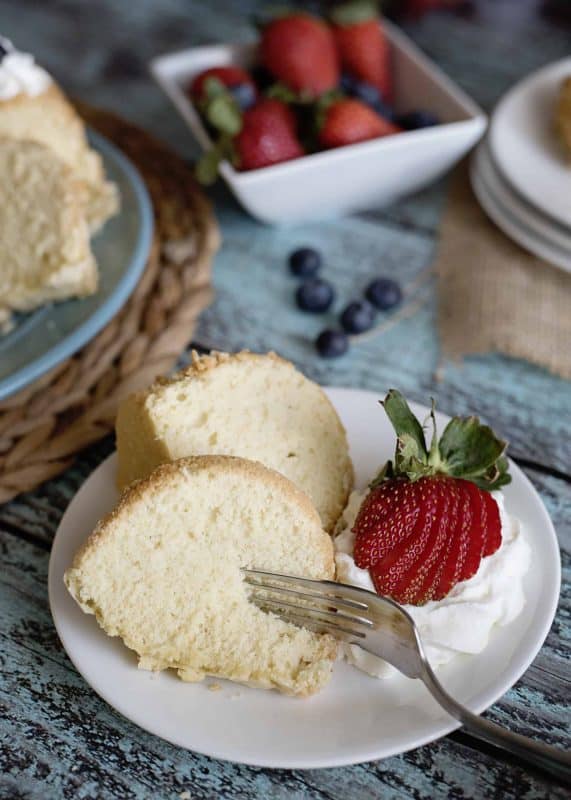 Wind Cake no doubt got its name from the method of making the batter. First, you whip large amounts of air into egg whites, then do the same with yolks before adding all of the other ingredients to the whipped yolks and then folding in the whipped whites. 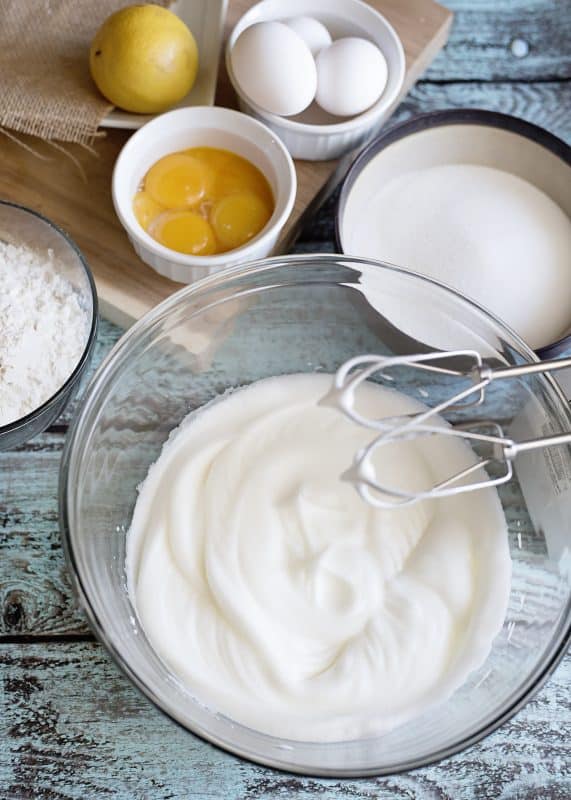 My favorite thing about recipes from this era is that they didn’t call for fancy or expensive ingredients, but used things you normally had in your pantry.

Begin by separating your eggs, yolks from whites. Make sure you don’t get the tiniest speck of yolk in your white. Then, using a clean bowl and clean beaters, beat your egg whites and salt until soft peaks form, 2-3 minutes. Add lemon juice and beat again until stiff peaks form. Scrape the beaten egg whites into another bowl and set it aside. 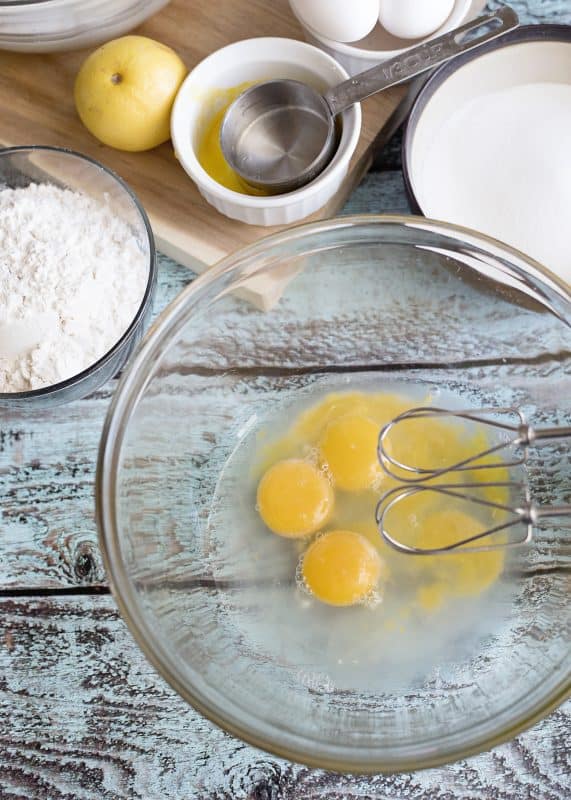 Now place your egg yolks and water in that same bowl you just used to beat the whites in (no need to wash it). Beat these for 3-5 minutes, until the mixture reaches within 1-2 inches of the top of your bowl. I bet some of y’all didn’t know it would do that! Get ready, it’s kitchen science in action. They will become a beautiful light yellow color as we whip all of that air into them. 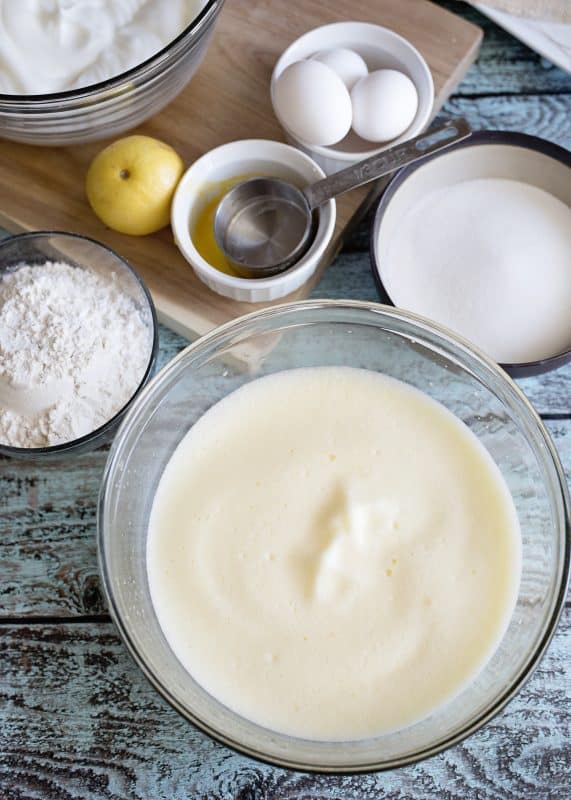 See how pretty? These are just egg yolks and water.

Now, while the mixer is still running on about medium speed, add sugar, flour, and vanilla. Beat until well incorporated, scraping down sides if needed. 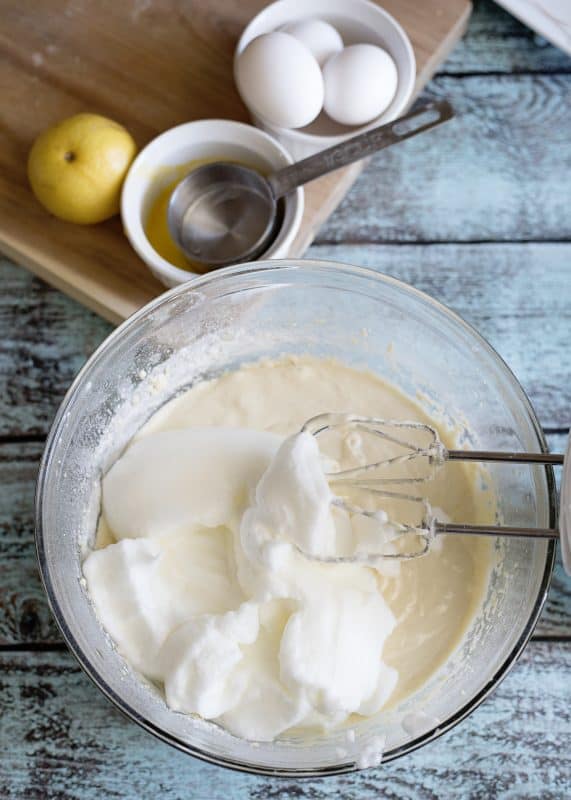 This will cause your mixture to deflate a bit, so don’t worry. Now add in your stiff egg whites and beat on low speed until just folded in. I usually do a little of this in the mixer and then finish it by hand with a spatula but Grandmama used her mixer the whole time. 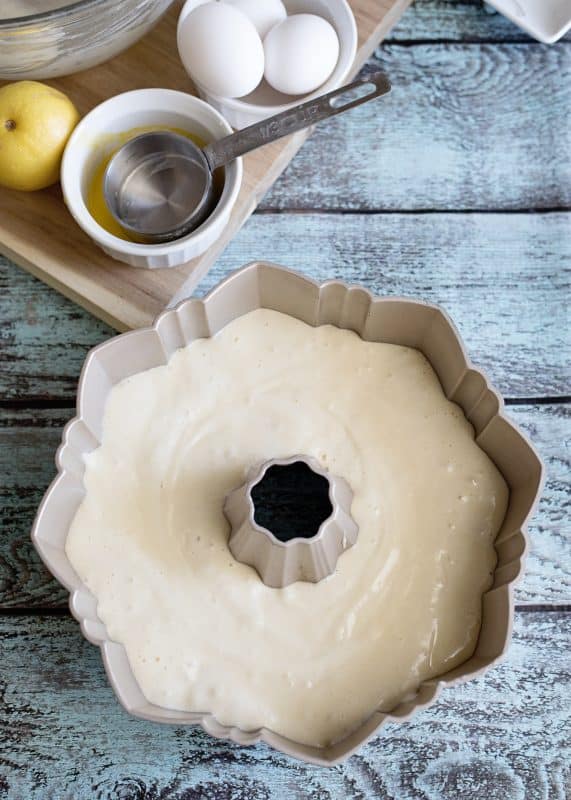 Pour this into an ungreased 12 cup bundt or tube pan. Yes, I said ungreased. The cake will cling to the sides and this helps it rise as it bakes.

Also, make sure you use a good quality bundt pan for this. I like Nordic Ware brand or Wilton brand. Just don’t use the cheapie thin ones if you can help it. 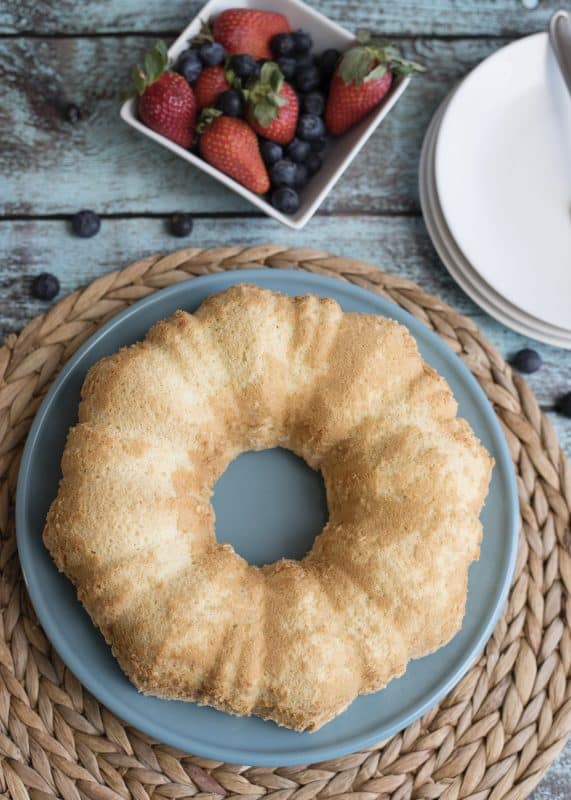 Allow to cool in pan for 10 minutes before turning out. Once it cools, I run a butter knife in between the pan and the cake to make it easier to turn out. It will stick a wee bit to the pan, similar to how an angel cake does, but that is all part of the process in baking this cake. Be ready to give the pan a good knock to get the cake out. 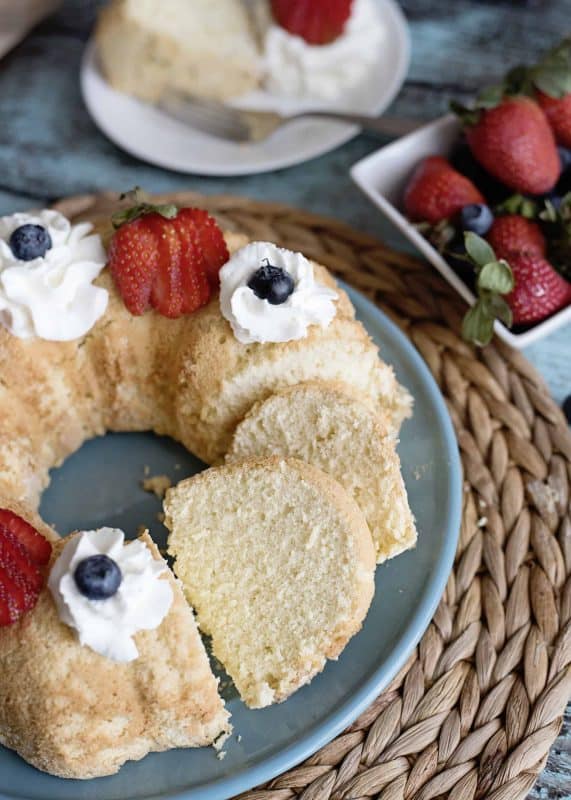 Join me in introducing this wonderfully light nostalgic cake to a new generation!

I hope you get to make Grandmama’s Wind Cake soon. Did you grow up with this cake or is it a “new to you” recipe? 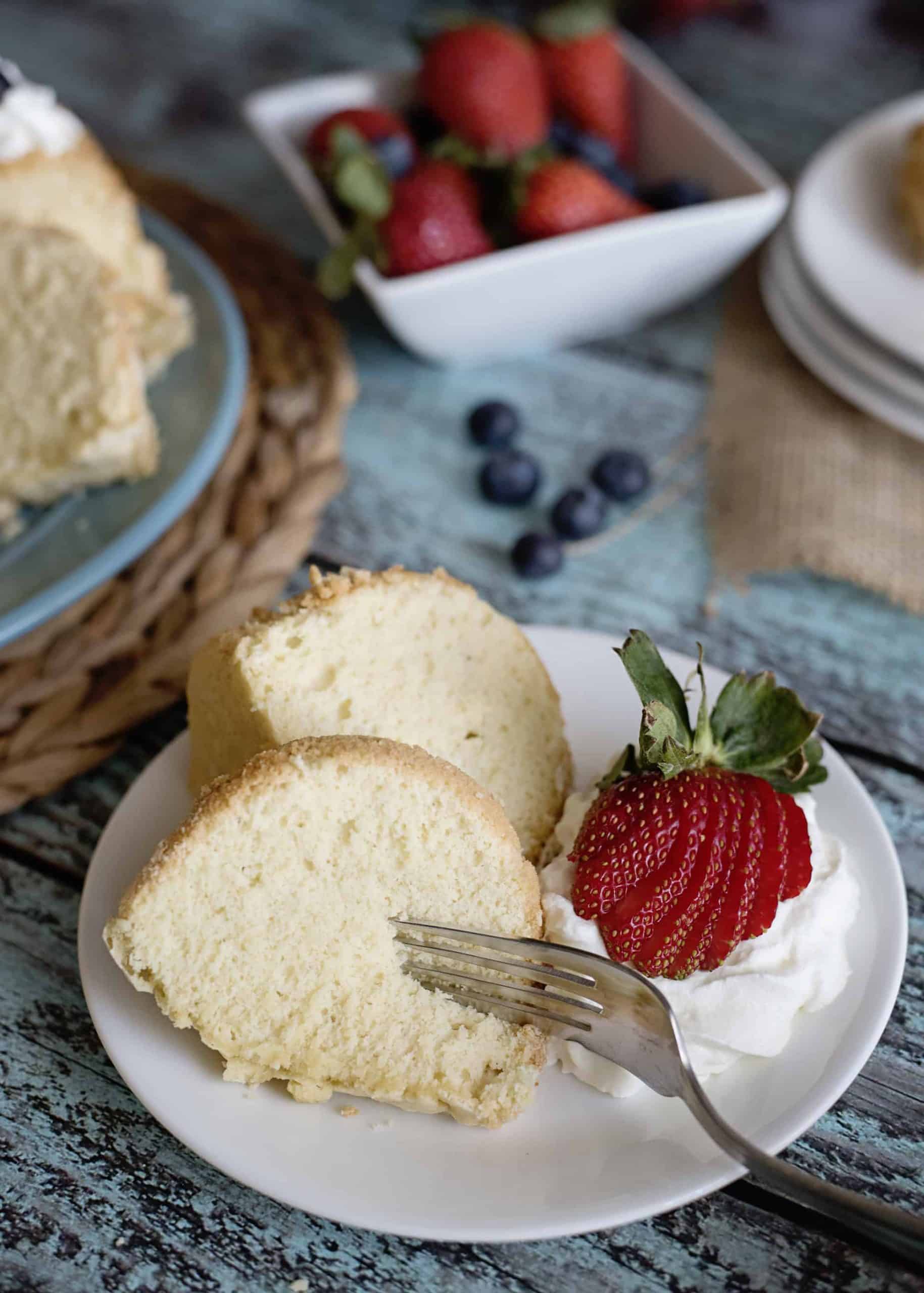 It is important to use an ungreased bundt pan for this as this helps the cake rise (the cake clings to the side and rises as it bakes). Use a good quality bundt pan for this, such as Nordicware or Wilton. If cake sticks overly much (a little is expected), go around edges with a butter knife.

You might also enjoy this recipe for Chantilly Sheet Cake !

Can I bake in advance and freeze it for company in 3 weeks. I appreciate your recipes las week I baked soft ginger cookies then came out delicious. thank you for sharing.

Yes, just make sure you seal it really well, that will be the biggest thing to preserving the quality of the cake

Hi Christy,
Love your books. I have all three and also gift them for Christmas to my sister. We both use your website a lot, too. Good job!

I have a question about the wind cake. It may be I’m just doing something stupid because I don’t understand. When I made the cake I used Mom’s big Kitchen Aid mixer. To do the egg white I used the whisk attachment and that went fairly well. Then I did the egg yolks and water on medium for quite a while and it only filled the bowl about half way up, not nearly close to the top. (Didn’t use the whisk for this part.) Also, I always have a problem with splattering out of the bowl when I mix liquids like this. I always have to throw a dishtowel over it or it makes a big mess. Anyway, the cake turned out splendid. I really liked that it didn’t use a lot of butter, too.

I don’t comment on a recipe unless I try it and I am so glad I tried this one. Yes, it was stubborn about coming out of the pan, but in spite of that, it’s my favorite cake at the moment. Love the texture and the taste. Good with strawberries and whipped cream, good with just whipped cream, good with lemon curd. Just good. Like Christy said, it is a cross between an angel food cake and a yellow cake, with a touch of pound cake thrown in.

Thank you for trying it and coming back to comment Martha!! I am so glad you liked it!!

Angel food cake is my most favorite cake to eat or make. Going to try your recipe for Grandma’s Wind Cake. Sounds so simple to make. Looking forward to eating it with strawberries & whipped topping.