If you’re on Facebook or Pinterest, I’d sure love it if you could use one of the buttons above! Thanks so much, now let’s make some of Mama’s delicious Pear Crisp!! 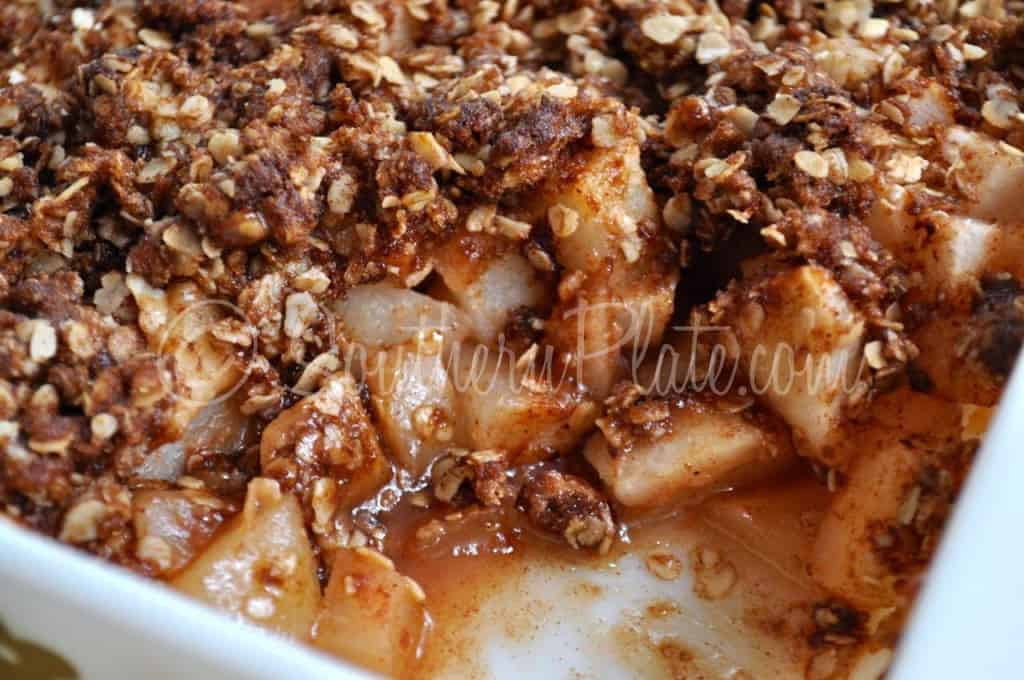 With an abundance of pears between us lately, Mama and I have been preserving and cooking up a storm! I hope you have had a chance to try my Chewy Pear Bars that I posted earlier this week because those have become a definite favorite across the board between my family, my parents, and my grandparents. Today I’m bringing you Mama’s Pear Crisp, which has been another big hit. The great thing about this recipe is that it is REALLY BIG on fruit and has just the right touch of crumbly brown sugar topping to set it off. This crisp isn’t overly sweet, but just right.

If you don’t have pears, apples will work as well.

I’ll spare you a long winded story today because I have to get Mama’s pear crisp post up and then get to cleaning out closets! I’m so excited. For the first time in our lives together, my husband and I are about to have nice floors in our house. We’ve always had really bad floors, no matter where we lived. Well this morning we made  a deposit on new flooring. It will be installed in about two weeks or so. We’re not doing the whole house just yet, but the living room, kitchen, and hallways are about to be transformed! We’ve dreamed of doing this for so long that I’m still holding my breath thinking it may not happen – but I’ve paid for it so it will happen, right? ~exhales~ I’ll keep you posted and you know I’ll have to share pictures! We bought home a sample over the weekend and my daughter had a grand time “sock skating” on it. I told her the whole living room will be a sock skating rink soon. I can just see the start of the Jordan Family Olympics….

Okay, so let’s make some of Mama’s Pear Crisp!

P.S. Be sure you stop in and say hi in the comments section below if you have time because getting to hear from you is one of the highlights of my day! 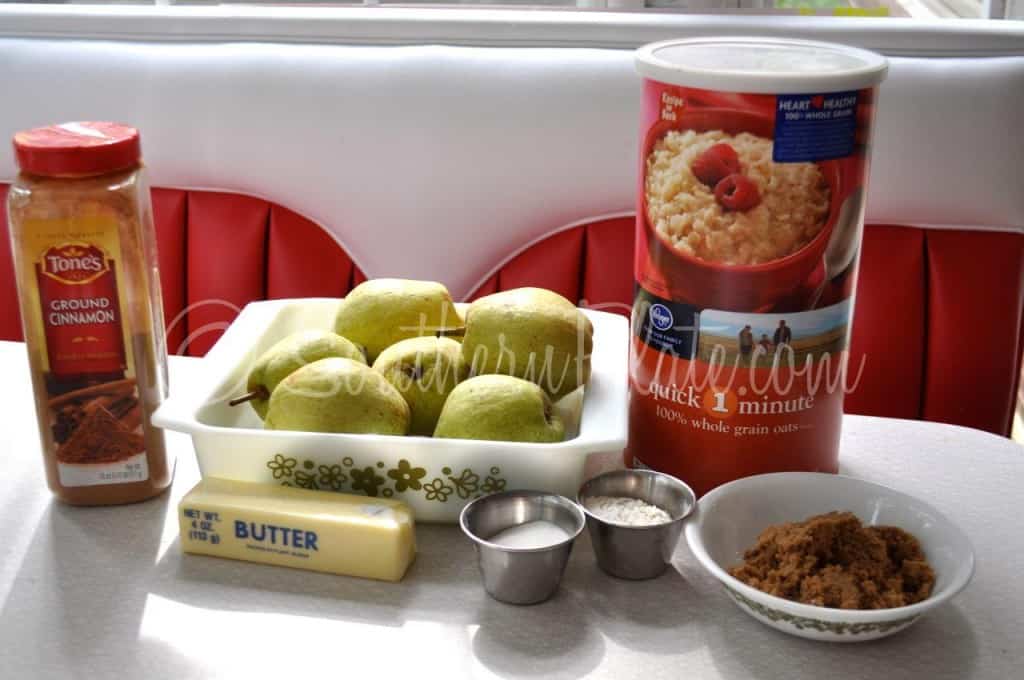 This recipe calls for a lot of pears, about 8 cups peeled and chopped, so just get however many you have and plan on having enough to fill up the dish once you’re done prepping them.

And by “Prepping” I mean peeling and dicing, not making them wear izod. 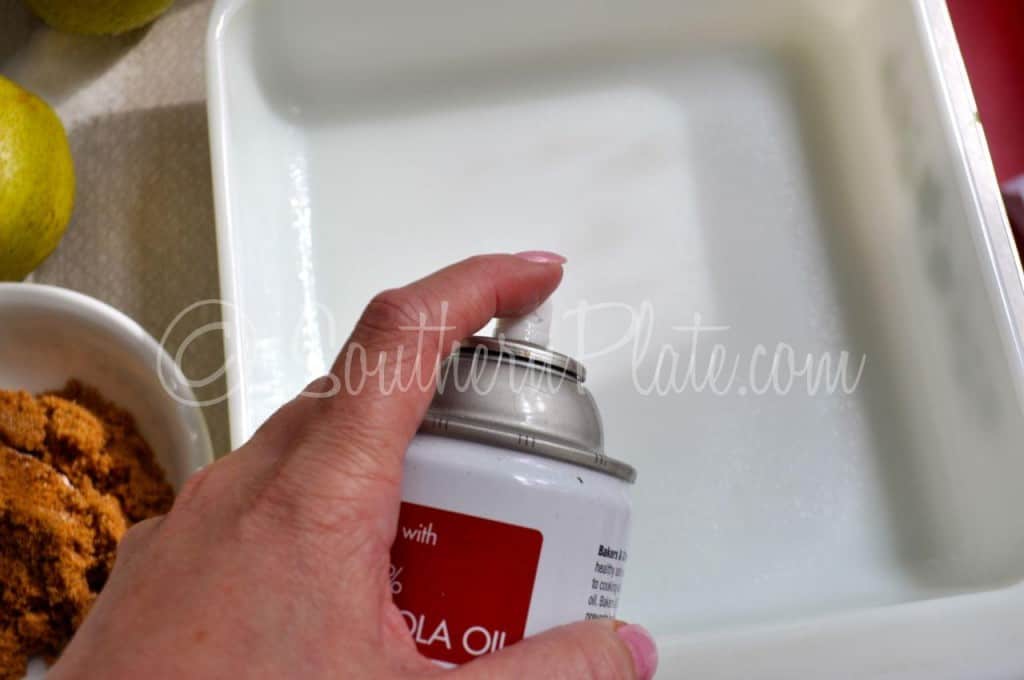 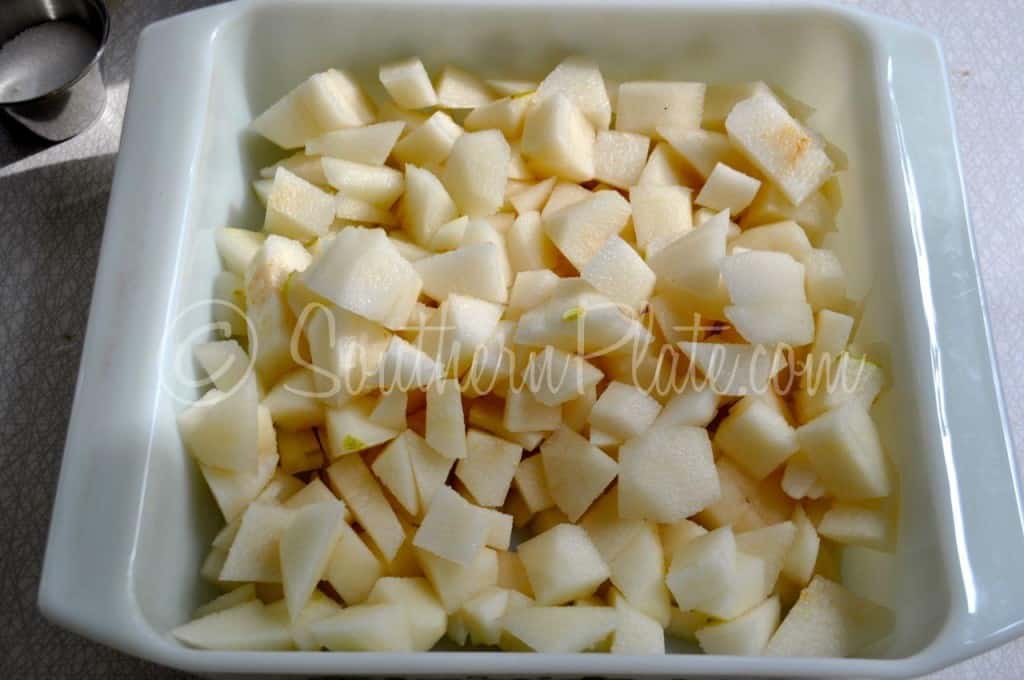 Peel and dice all of your pears and place in your 8×8 dish.

This isn’t the full eight cups that Mama’s Pear Crisp recipe called for but it was the number of pears I had out and at this point I already had a blister from my paring knife because I’d peeled so many over the past week, so I got all of these done and decided that was good enough. I could have peeled and chopped two or three more, but I could also ride down into the Grand Canyon on a donkey’s back or learn to yodel. One of those three things seems a lot more fun and I’m not saying which one but it doesn’t have to do with donkeys or pears. 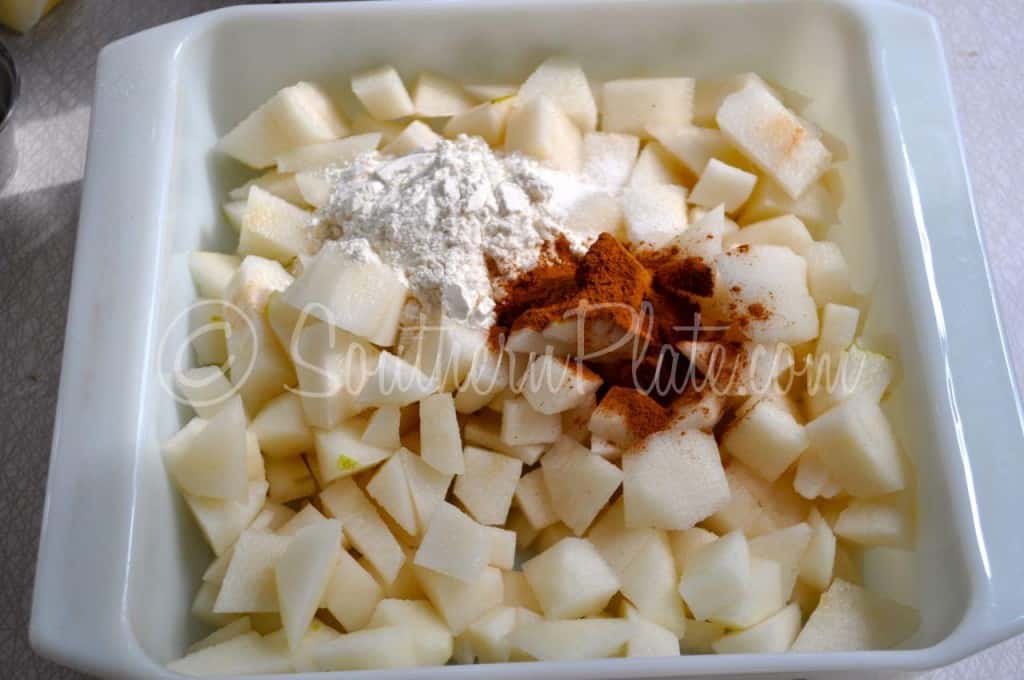 Sprinkle your flour, sugar, and cinnamon over the pears in your baking dish. 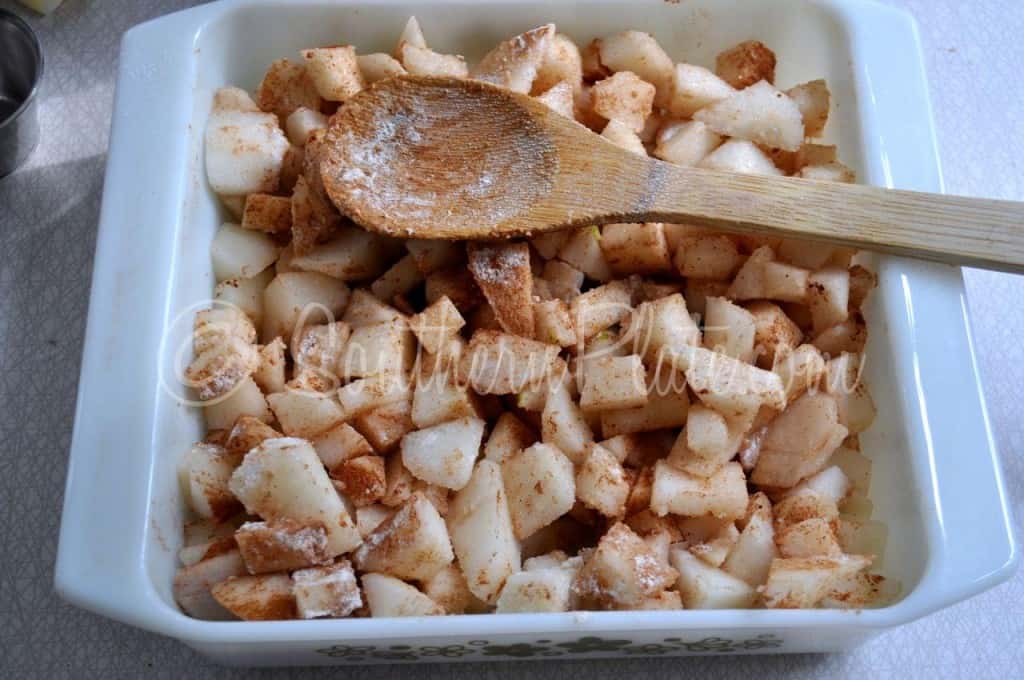 Stir them up until well coated.

Now, as our pears release their juices while the bake, those juices will be automatically thickened, lightly sweetened, and perfectly spiced. 🙂 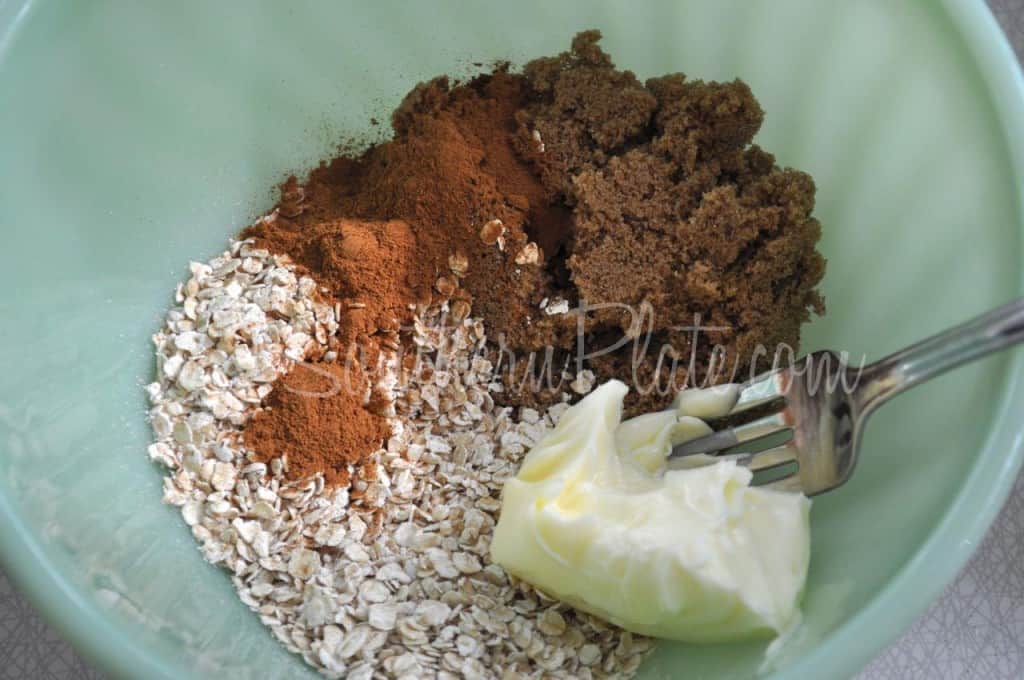 In a medium bowl place your oats, brown sugar (light or dark, whatever you have), cinnamon, and butter. 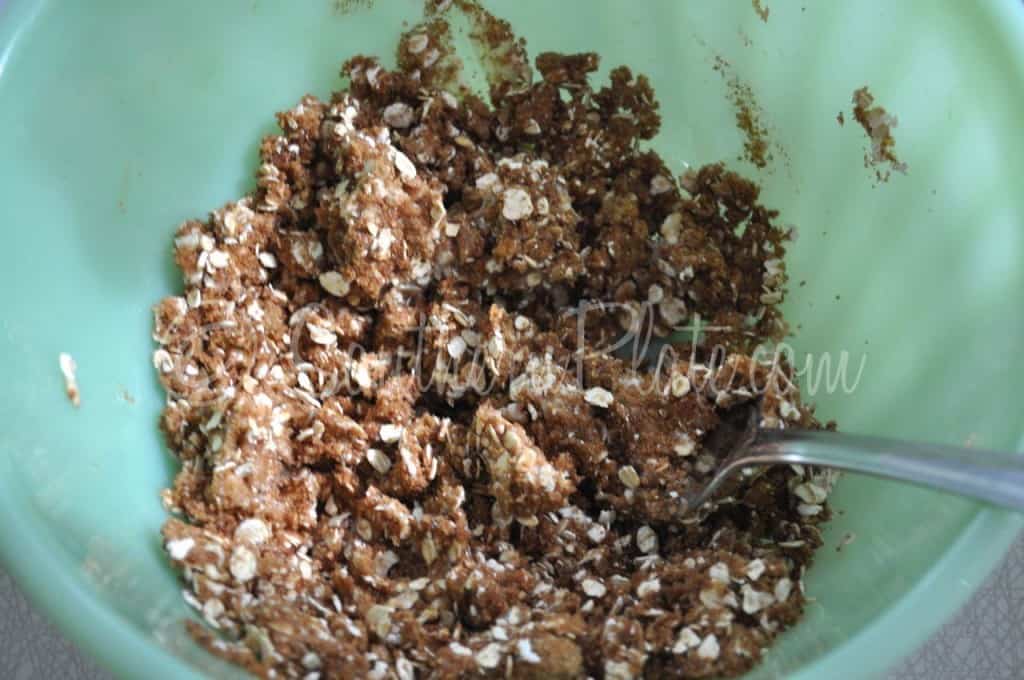 Cut that together with a long tined fork until it looks something like this. 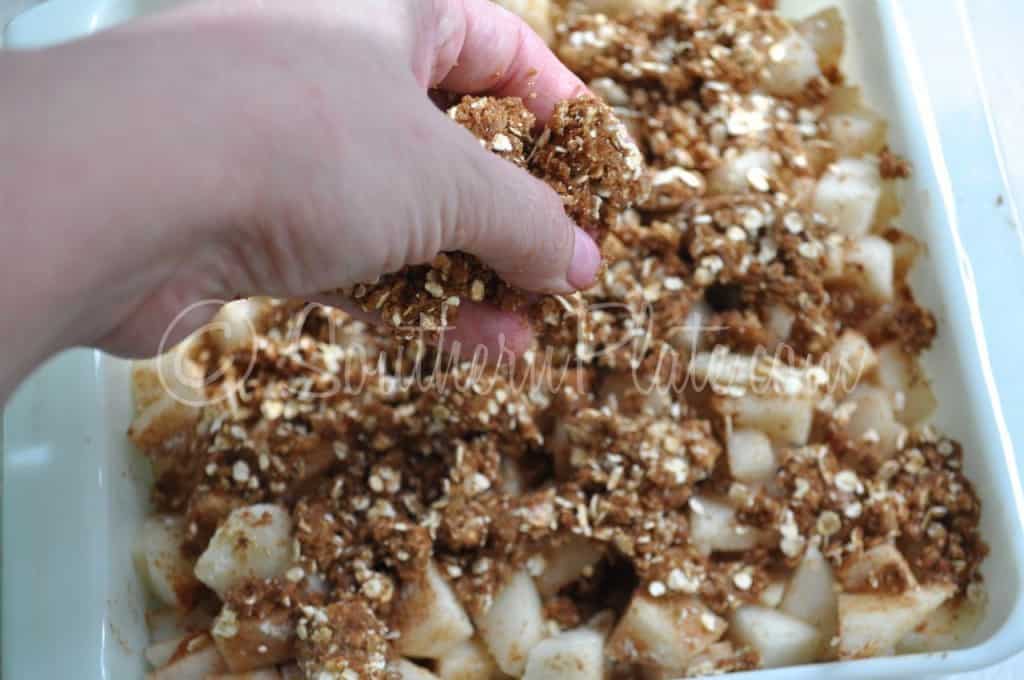 Sprinkle that over your pears. 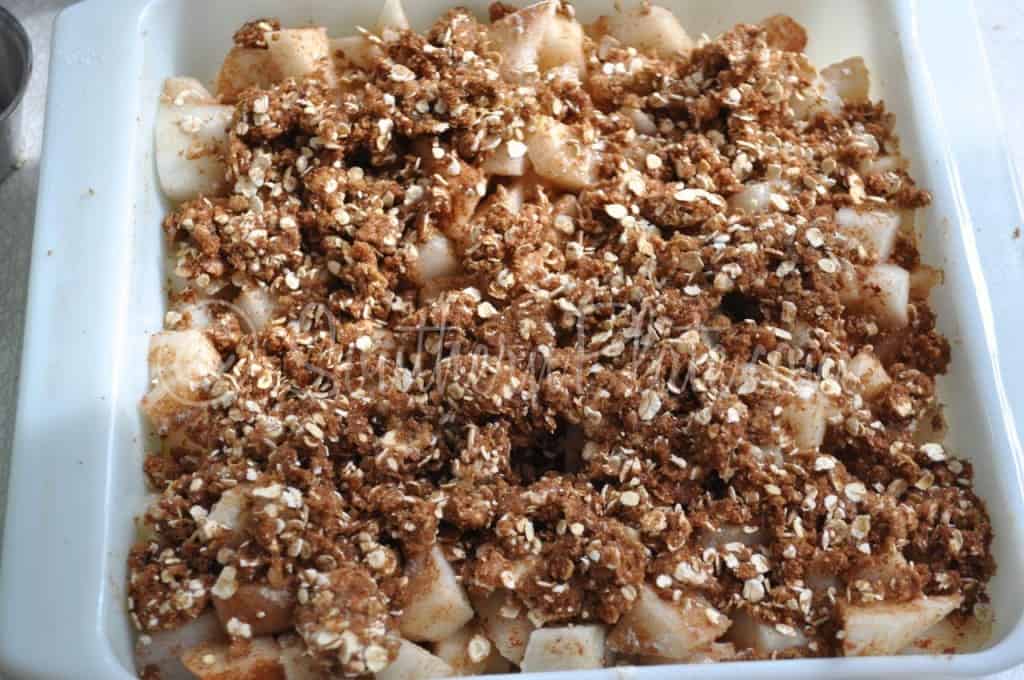 Serve Mama’s Pear Crisp hot on it’s own, drizzled with caramel, or topped with ice cream 🙂

To save this to your free online recipe box, just click the blue “SAVE RECIPE” button below!

If you don’t have a recipe box set up yet, clicking this button will walk you through the process. Once you have recipes in your box you can easily access them and even automatically build grocery lists based on what you want to cook! 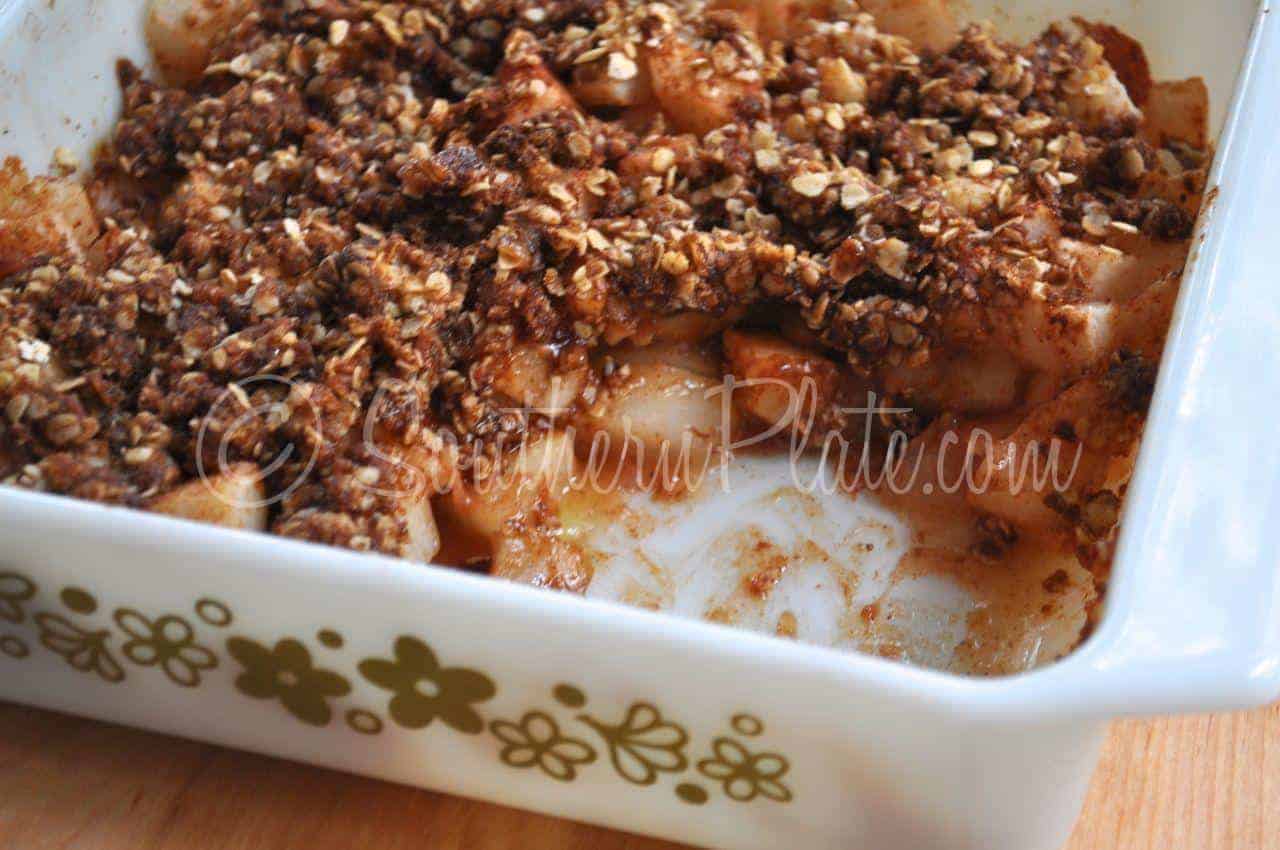 ‎”At some point everyone must decide if they are a creator or a critic, a lover or a hater, a giver or a taker.”