When you’re looking for a low-carb snack or dessert, check out this berry crisp recipe with a delicious sugar substitute. It pairs juicy berries with a cinnamon-spiced crumble topping that’s to die for.

I’m eating low carb pretty much all the time now and I love it. But let me tell ya, a girl has needs. Fortunately for me, delicious recipes like this berry crisp one can be low carb and I have found that eating low carb is one of the easiest ways of eating I have ever adopted. So today, we are going to address my need for fruit crisps because it was just about getting the best of me and I hit it out of the park with this little experiment of mine.

Oh mercy, this healthy berry crisp recipe is so so so good! Plus, it’s so quick and easy to make. All you have to do is mix together the topping, blop it on top of the berries, and bake for 30 minutes. I really enjoyed the added flavor my low-carb ingredients gave to the crisp topping, which is made from pecans, cinnamon, vanilla, butter, sweetener, and almond flour/meal. It’s slightly spiced, deliciously crumbly, and just the right amount of sweet. Expect a taste explosion when you pair this crumble topping with the juicy and tart berries.

In place of vanilla ice cream, I poured a little heavy cream over my serving like my ancestors used to do, and that tasted like melted ice cream and just sent this over the top. Heavy cream is a welcome bonus when you are eating keto! Another option is pairing it with Greek yogurt. Whichever topping you choose, I hope you enjoy this low-carb summer berry crisp when that sugar craving hits! 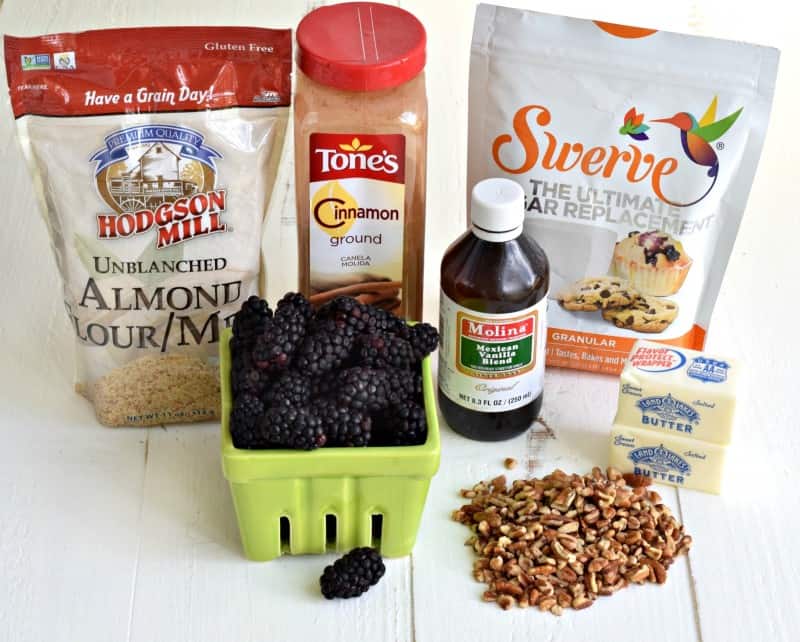 How to Make Low-Carb Berry Crisp 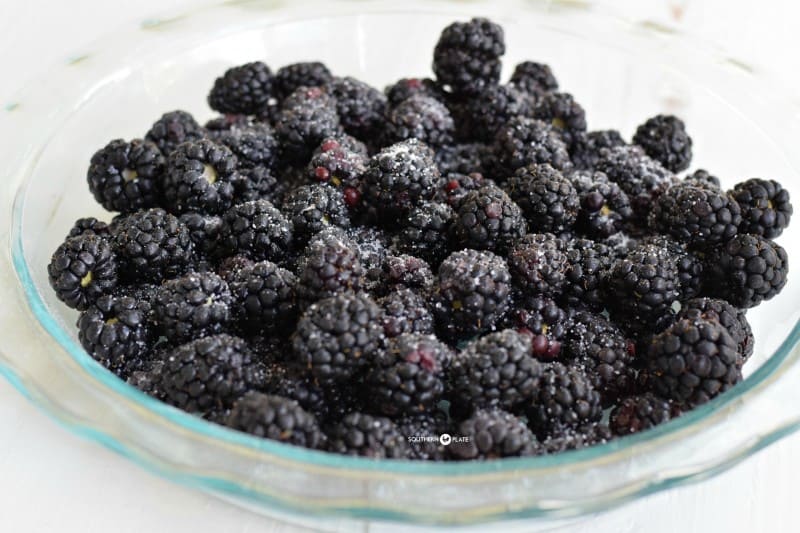 Place the berries on the bottom of a pie plate.

Sprinkle just a bit of sweetener over the berry mixture if you like. I added a teaspoon of Swerve.

Note: It depends on your berries whether or not you will end up with a lot of juice in the bottom of your pie plate. My blackberries burst forth with juice with each bite but they weren’t drowning in it like you are used to seeing with super sweet crisps and cobblers. They were so good, though! SOOOO GOOD! 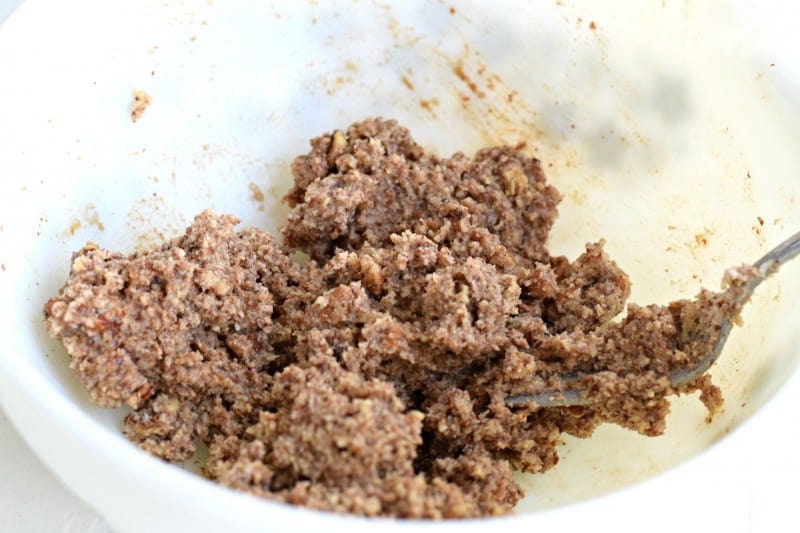 In a medium bowl, place the almond meal, cinnamon, sweetener, vanilla, and butter.

Cut this together with a fork until it looks kind of like the picture above.

Now stir in the chopped pecans.

IT IS SO GOOD! I could just eat the bowl. Also, once you taste it you can decide if you want to add more sweetener at this point. 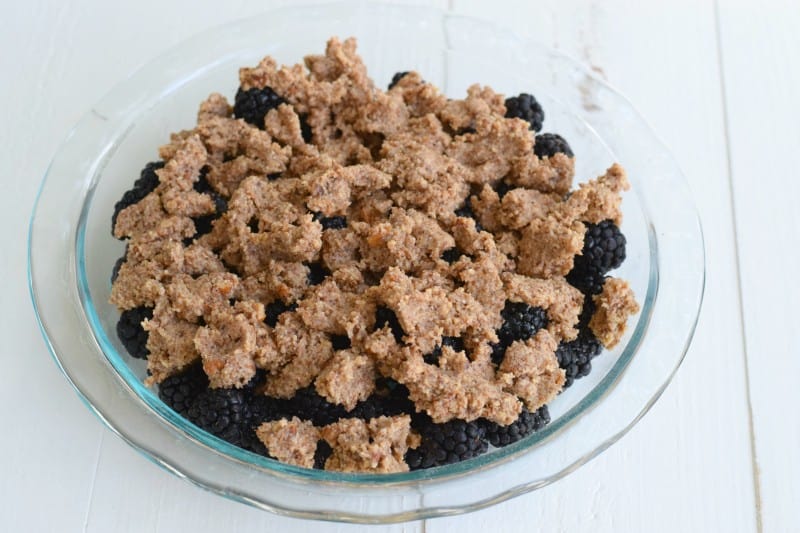 Now pinch off bits of this and blop them all over the top.

Blop! Blop! Until the top is all covered.

A few minutes before it is done, send your entire family out of the house on an errand. 😉

And that’s it! Enjoy a delicious low-carb berry crisp!

Store leftover crisp in an airtight container in the fridge for up to 3 days. Reheat quickly in the microwave.

What kind of almond flour do you use?

Almond flour or meal is a very nutritious gluten-free alternative to wheat flour.  It can be a little tricky to bake with but for our purposes here it’s great. I have also found it at every other grocery store I shop at. Walmart has it near the flour and Kroger has it in the health food section. This is basically ground almonds and is WONDROUS as a crisp topping because of the toasted nut flavor it adds.

What sweetener should I use in my crisp?

When it comes to sweeteners,  you can use Stevia. But in this recipe, I am using Swerve because it essentially has zero net carbs. Swerve is a little pricey but a little goes a long way.

Why use berries in this crisp recipe?

Fruit is pretty carb-rich so I have been avoiding it, but berries are among the lowest carb fruits and are okay once you get the ball rolling and have been eating low carb for a while. Blackberries, blueberries, raspberries, strawberries – whatever cranks yer tractor is fine here.

What do you serve with berry crisp?

Apple Crisp in the Crockpot 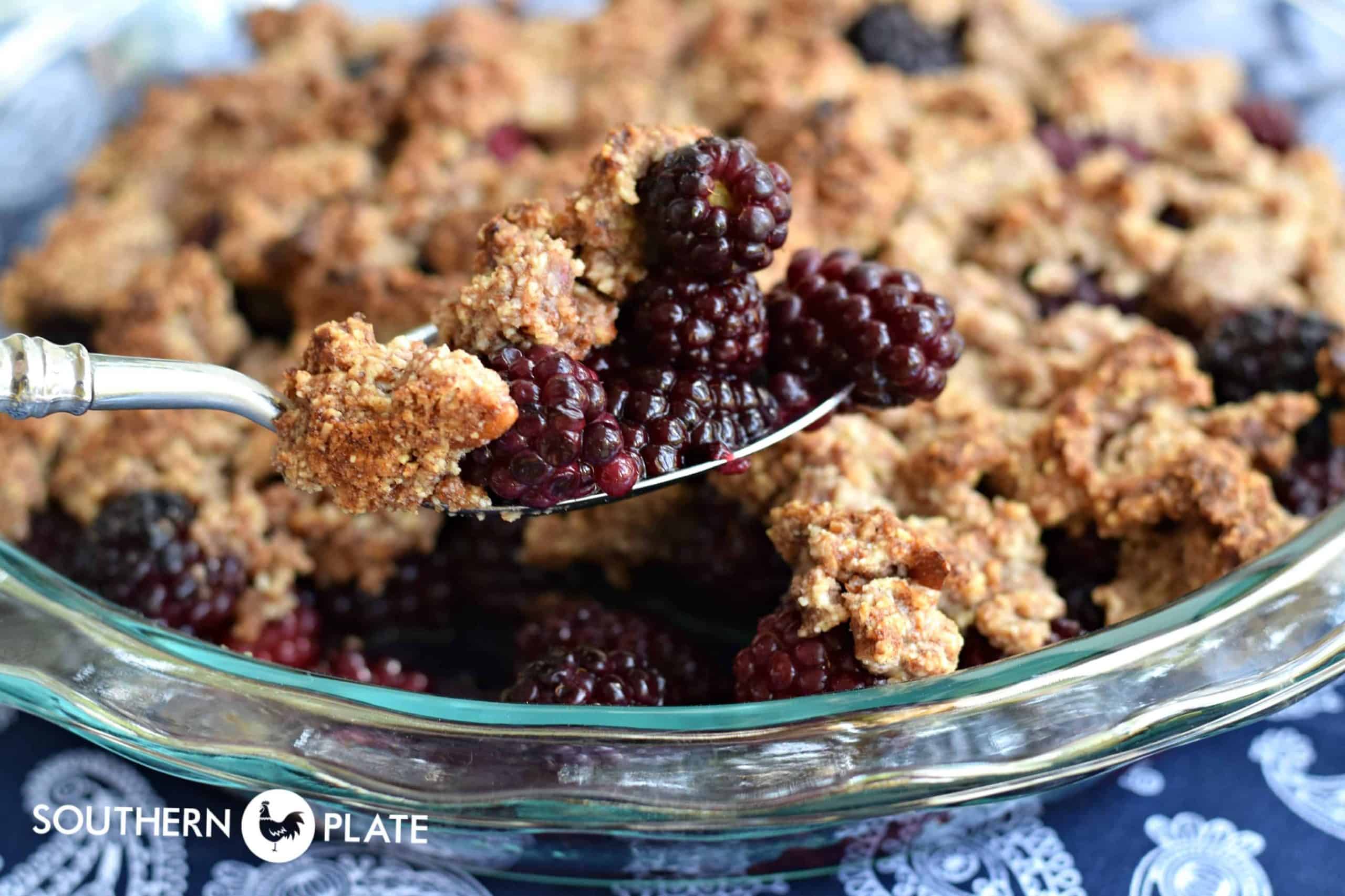 *You may want to use more sweetener, especially if you are using Splenda. Sweeten to your taste. Using Swerve, this was just enough for me. **I don't know the carb count on this, only that it is significantly lower than my usual recipe.

We are all worms. But I believe that I am a glow-worm.
~Winston Churchill 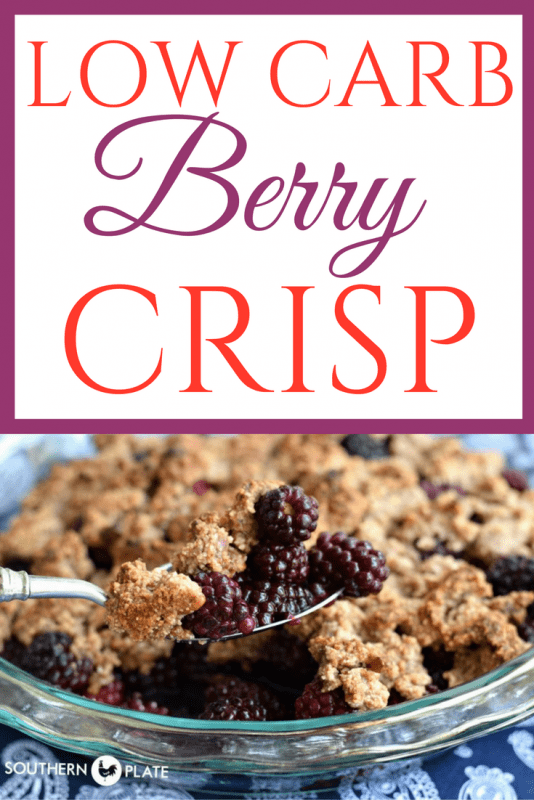 Hi, just wondering why you’ve called it Berry Crisp but then said it’s not going to be crisp, more like cookie dough. I just read all of this only to find it won’t be crisp!

Summer berries…cobblers…another comfort food of mine

I am new to keto. What is the nutritional breakdown of this dessert? Net Carbs, etc.

Hey Jennifer! I don’t offer nutritional breakdown information here as there are too many variables on the reader’s end that I am unable to control. BUT your new best friend is going to be myfitnesspal.com. It’s free and you can input any recipe or food item to get a complete breakdown. They also have an app. I think you’ll love it. There are other apps and websites as well but this is the one I use.