Home » Breakfast » Cooking Together: Toad in the Hole

Today Mama is narrating a little cooking project that we did together, Toad In The Hole. All yours, Mama! ~Christy 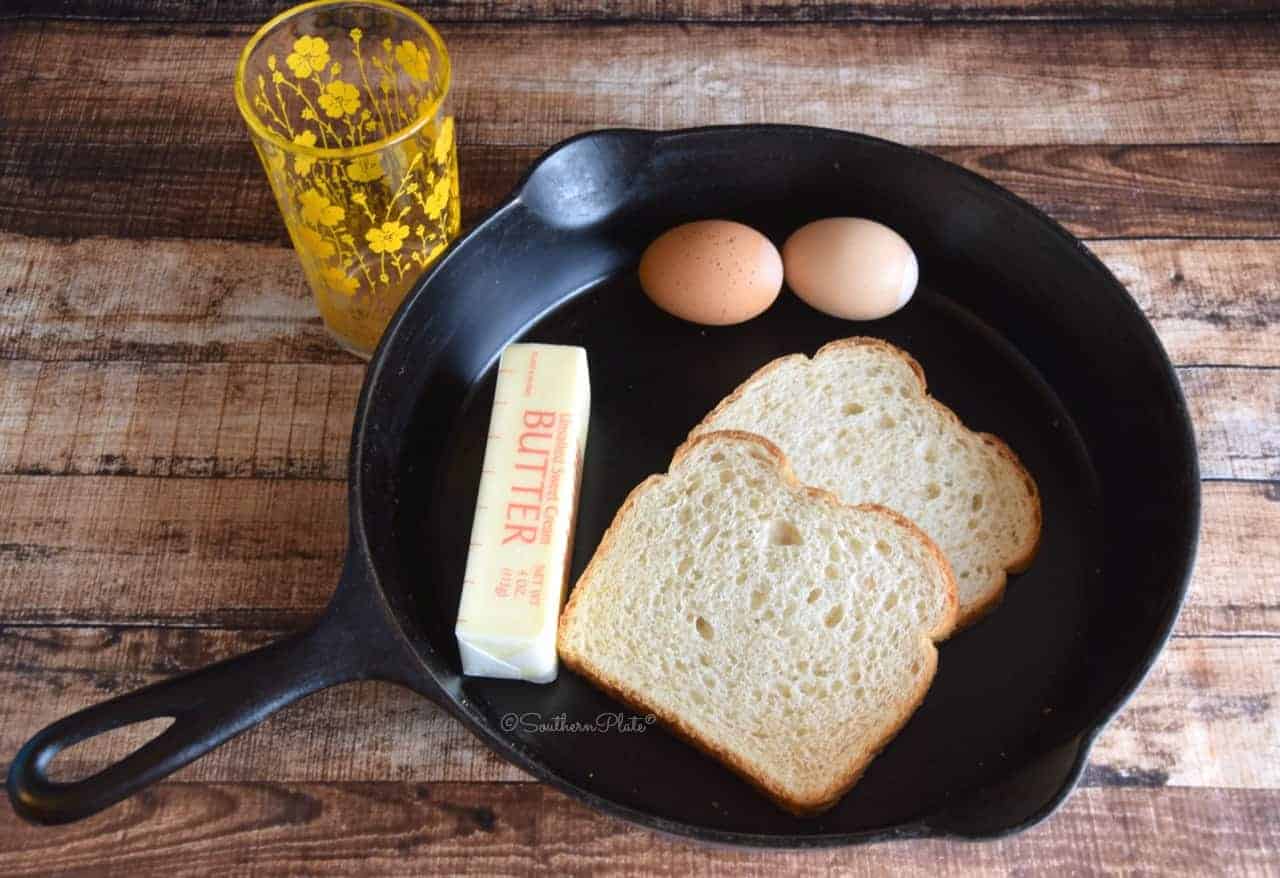 Christy and I decided to present you with both our ways of making Toad in the Holes.  We first heard about these from an old black and white movie.  Christy can probably tell you the name of it and who starred in the movie.  I’m the type that watches a movie and never takes note of the title or actors.  I just enjoy the action.  That probably tells you that we are very different types of people in most ways.  But in the way it matters most, we are the best of friends.

Toad in the Hole is the recipe that I look forward to making for myself in the rare event that I am home by myself at breakfast.  I guess since I have it so rarely, it has become something that I look forward to.  My other indulgence is Stouffer’s Lasagna for dinner.  As you can see, I am quite the gourmet.  I thought that the way I make Toad in the Holes is the only and best way to prepare it.  Because, as you know, mothers always know best. 😉  But then the young whippersnapper, Christy, lets me know that she has a better way, in her opinion.  I love my way best  because you have the little round hole which is toasted with butter and has a delightful crunchiness which is divine.  She mashes her bread down in the center instead of cutting it out so she loses that.  She loves her way because it is quicker and easier to prepare.  Two hardheaded women trying to reinvent the wheel.  I am going to walk you through both ways and let you decide which you prefer.  We’d love to hear from you. Either way, the world will keep turning and we will keep cooking.

Christy’s note: The first movie we saw it in was black and white but the second movie was a Betty Grable one, Moon Over Miami. I don’t call it “Toad in the Hole”, I call it “Gas House Toast” because that is what they called it in the movies, lol. I love old movies, far better than anything made today. When I lived at home we had two old movie channels and if I was ever watching television, it was on one of those. Mama was the only person in the family who would walk by, take an interest, and sit down to watch them with me!

And I’ve always felt that my mother does everything perfectly. That’s just the thing, though! I knew, growing up, that I could never be as perfect as I viewed my mother to be so I just threw perfect out the window and figured I’d do the best I could and make sure I enjoyed the process as much as possible! That is why my way is a little less maintenance than Mama’s, but hers ends up prettier ;). I’m good with that! Now back to Mama. 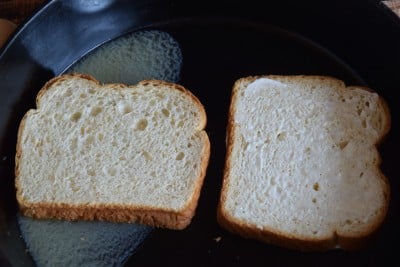 Step one:  Christy’s way is to melt some butter in the pan and put the bread on top.  Mama’s way is to butter both sides of her bread all the way to edges and place into the hot skillet. 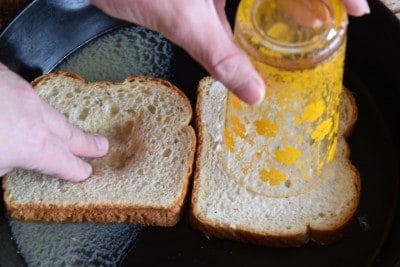 Step two: Christy proceeds to mash the heck out of the center of her bread until it is nice and flat.  Mama takes a small glass and cuts the center out of hers.

Christy: I would not call that mashing the heck out of it, just pressing down a bit with my fingers to make a nice little cradle for my egg :). 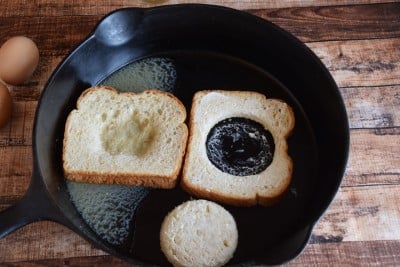 Step three:  Christy leaves her bread to cook as it is.  Mama removes the round center disc and sets it to the side to get nice and golden.

Christy: Hey, it works and it’s one less step. 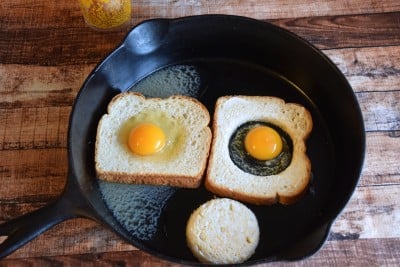 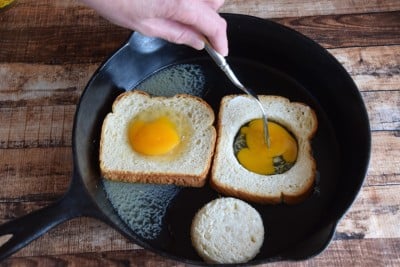 Step five:  Christy just lets her egg sit and cook all alone but she does pierce the yolk a time or two.  Mama breaks the yolk in her egg so that it completely fills the hole and the yellow is distributed.

Christy: See Mama, all those times you complained about how messy my room was growing up, I was just trying to make sure the mess was distributed. 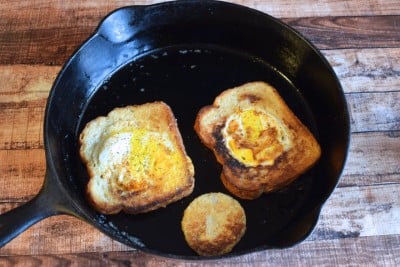 Step six:  Christy flips hers over and lets it finish cooking.  Mama flips her Toad in the Hole and her round circle over so that they both continue to cook and get nice and crusty.

Christy: I don’t know about y’all, but I’d prefer the one that someone else cooked for me! I don’t care what you make or how you make it, if you’re cooking for me, I’m happy!

A lot of people said that Christy got her love of cooking from me.  While she probably did inherit that trait, she took it and ran with it.  I was satisfied with old tried and true recipes and never deviated from the way I had always seen them prepared.  She went to college and learned that it was okay to trade up ingredients and experiment with food.  I guess I never tried it because money was scarce and I never wanted to take a chance on ruining a dish.  I have since learned from Christy that it is okay to have fun with food.  If you are short one ingredient, substitute another that you like equally well.  You may be surprised that you like your way even more and maybe even develop a new recipe in the process.  As long as your dish is made with love, your family and friends will enjoy it.

Now take a look at both ways that we make Toad in the Holes and I’m sure you will agree that Mama’s way is best (just kidding!).  If you decide that Christy’s is best for you that is okay too.  Just remember to have fun in the kitchen.  It is like a playroom for adults.  Similar to playing with Playdoh but safer to eat.  We look forward to sharing different ways that we prepare food with you!  Have fun and remember Mama loves you.

Toad in the hole

Cooking Together: Toad in the Hole. Mama and I each share our own way of making Toad In The Hole, you can decide which is right.
Print Recipe Pin Recipe
Prep Time: 35 minutes
Cook Time: 30 minutes
Total Time: 1 hour 5 minutes
Course: Breakfast
Cuisine: American
Keyword: egg
Servings: 4
Calories: 183kcal

“It is the sweet simple things in life which are the real ones after all.”

When I was a kid and Dad said he was going to make breakfast – THIS is what we got. First he had to fry some bacon. Then the bread – prepared your Momma’s way with a hole in it (Dad even had a ‘special’ glass that was kept just to make the hole) was fried in the bacon grease – both sides until almost done. The egg was broken onto the bread hole, but the yolk was not broken. Flipped quickly so the egg would be done ‘over easy’. Served with the fried hole over the egg for dipping, with the bacon and some smoked beans on the side. And a cup of tea. If he made this when we were camping he would make it all over a campfire and be sure that some ash was in the food. He said it was nature’s salt and pepper. LOL! Too good! He’s been gone for almost 30 years now, but I still do exactly the same thing and my hubby loves it. Thanks for bringing back a great memory.

🙂 What wonderful memories!!! It made me smile right along with you!!

My mom called it “frog in a pond” and cooked it your moms way.

Hey this is so cool my mama called it egg in a nest, we cut out the middle and put the egg in but we do not break the yolk we turn the bread and egg over and make an over medium egg. Yummy guess what I am having for breakfast in the morning. Thank you for reminding me how good this is!

I’m with Mama. We love the extra circle of buttery bread goodness. It’s one of the best parts!

Mama’s way all the way!