Home » Breakfast » Waste Not, Want Not French Toast (And How To Freeze It)

Waste Not, Want Not French Toast: Learn how to make the BEST French Toast from leftover Hot Dog Buns or Hamburger Buns! 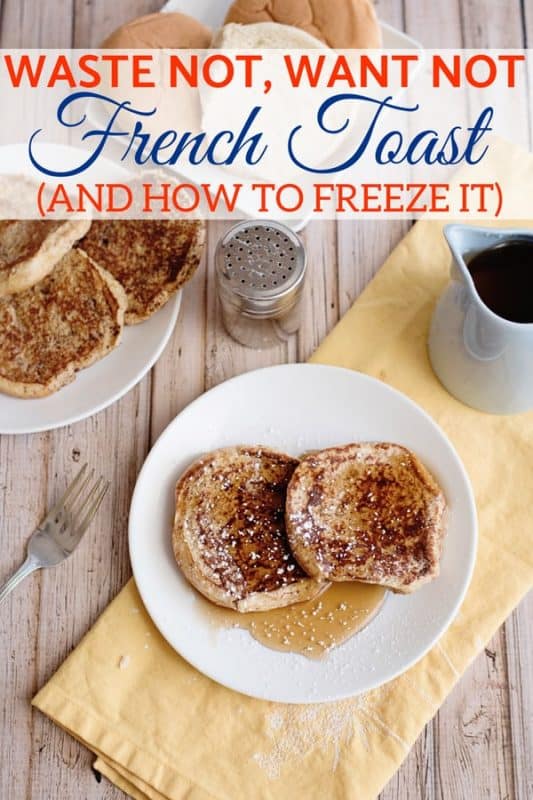 I hate to waste food. Now for those of you who have been reading Southern Plate for a while, I am likely sounding like a broken record on this point but I can’t help it, wasting food bothers me. Besides being delicious, that is why I love thisWaste Not, Want Not French Toast!

I’ve heard too many stories from my family about how scarce food has been in the past and children going hungry (in my family) to be able to take it for granted. I’ve mentioned a few times before but it bears repeating as it is a point which has impacted my life: I am the first generation in my family never to have known hunger.

This did not come easily, there were many times growing up when my parents would pretend they were busy while my brother, sister, and I ate so they could be sure we got enough, then they’d eat whatever was left. People have sacrificed so that I would never know hunger and I’m not about to go willy nilly tossing food in the trash when I can recycle it into something yummilicious with just a few added ingredients.

With all of the holidays and cookouts this summer, we’re all liable to have leftover buns. Rather than let them sit on the counter until they finally get thrown away, we’re going to turn them into a WOW dish. I’m not kidding on the wow part, either. This Waste Not, Want Not French Toast is TO DIE FOR. It’s so good, in fact, that I sometimes go and buy buns just to make it.

Now the ingredients are surprising but not nearly as surprising as the fact that this will likely make the best french toast you’ve ever had. The texture and flavor are absolutely perfect. This is a recipe I love to make. I take whatever hamburger or hot dog buns are going bad and whip up french toast out of all of them. What we don’t eat that day, I place on waxed paper lined baking sheets and put in the freezer until hard. Once hard, I take them off  and slip them into gallon sized zipper seal bags and return to the freezer. To reheat, just place a slice in the toaster on two cycles, turning after the first one (this may vary for your toaster).

Make your own toaster french toast out of left-over Waste Not, Want Not French Toast at a fraction of the price with flavor that blows the rest out of the water. If you’d like to read how I got started (and got my family firmly addicted) with making this, check out my old post on Depression Bread Pudding, another recipe using leftover buns. 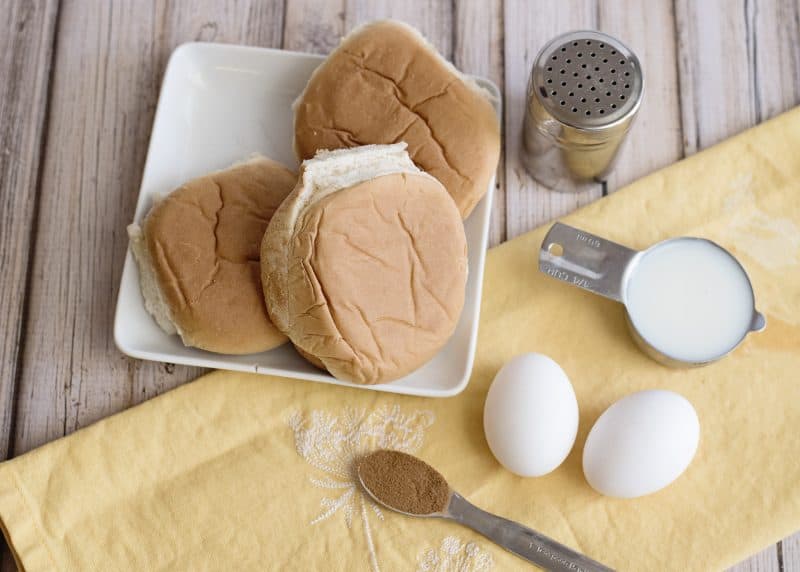 Your favorite french toast batter can work here but I’m gonna show you mine as a starting point.

I like to keep things simple. Life is complicated enough. 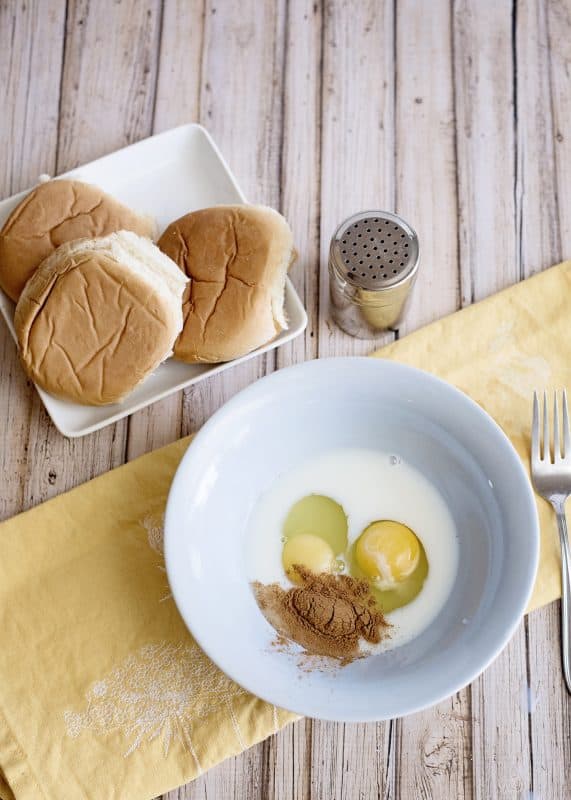 Place eggs, milk, and cinnamon in a bowl. 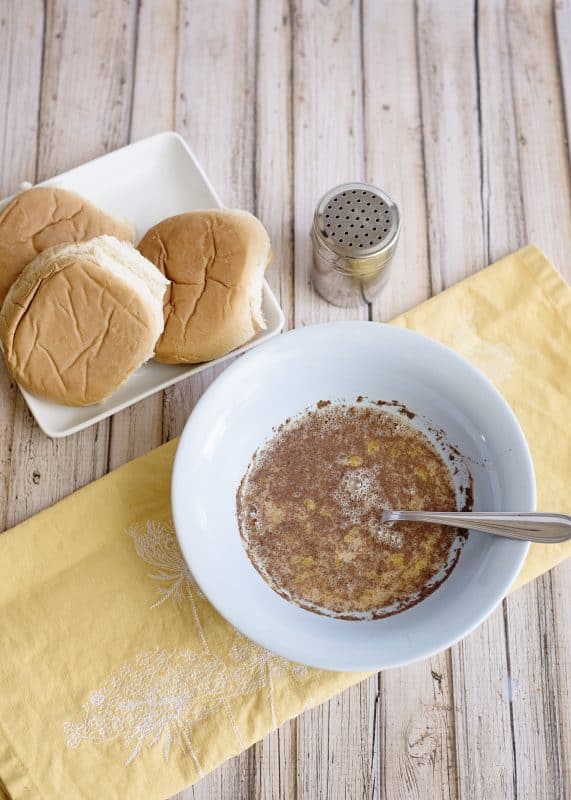 Beat it ’til it cries uncle. 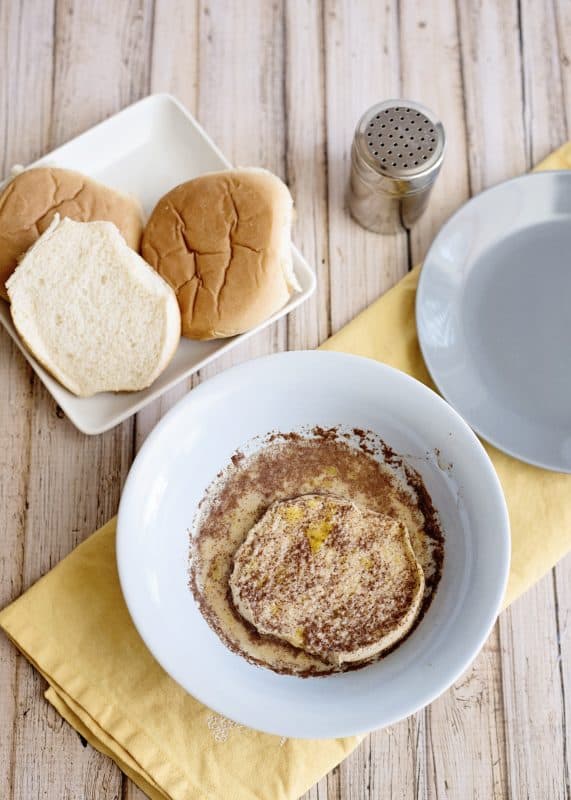 dip each side of your bread into the batter. 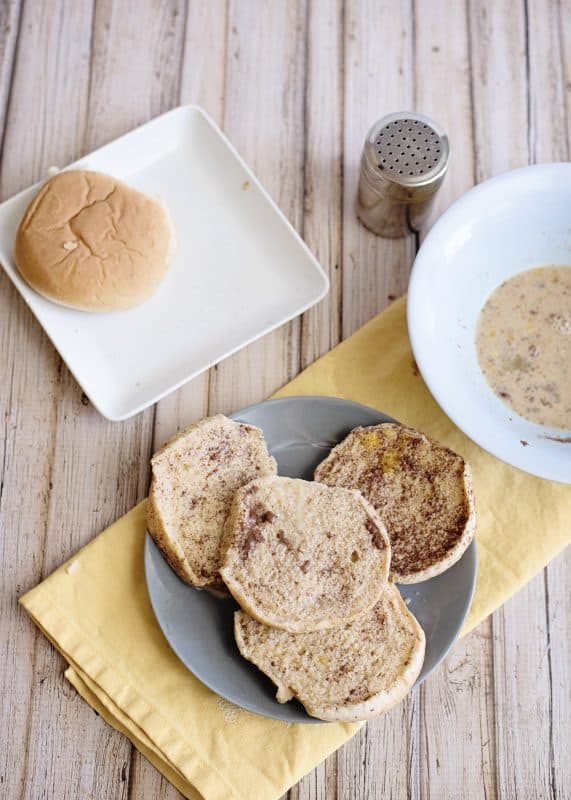 Make sure you just dip the slices and then take them out. If you leave them sitting in there it’ll get all soggified. 🙂 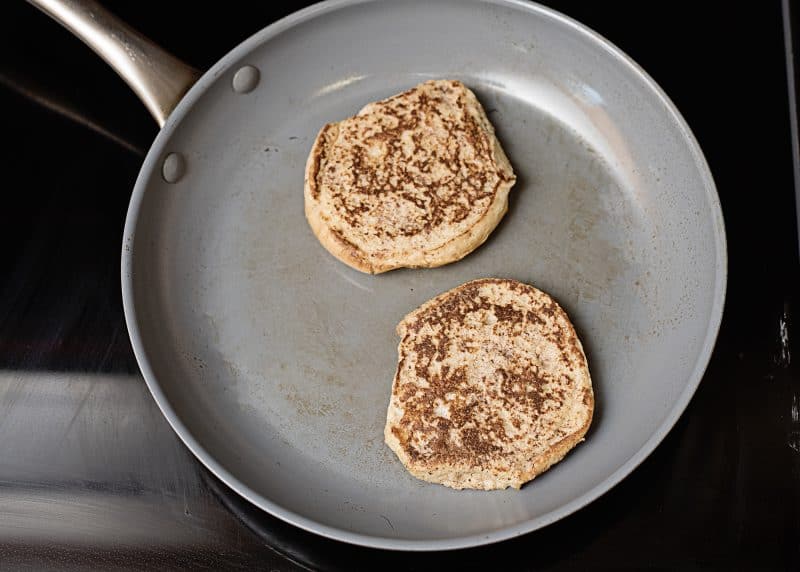 Spray a large skillet with cooking spray and heat it to medium heat. You can also just toss some butter in it if you’d rather do that instead of the cooking spray. It depends on my level of laziness on any given day. Today, I went with the spray. I was craving a Diet Dr Pepper and didn’t want to delay that gratification any longer than necessary.

I keep my Diet Dr Peppers in my old fridge in the garage. I have to walk through the house and down a flight of steps to get to them. It is better this way. Were they nearer or more convenient, y’all wouldn’t ever hear from me as I’d be sloshed over in a corner with a straw all day.

Note: I know I am going to get a few emails (at least) today about how unhealthy Diet Dr Pepper is and all that. Y’all are so sweet and I love you for it! Its my vice, though, and I’m stickin’ with it. I don’t curse, I don’t drink, and I don’t smoke. I don’t rob banks and I’m not a terrorist. I have never done anything illegal. I don’t even litter. I always vote and I drive the speed limit. I stand up for the pledge of allegiance. I don’t wear blouses that are too low or skirts that are too high. I feed wild birds and I let squirrels sunbathe on my back porch (see below). I don’t pick flowers from public landscaping and I don’t put sugar in my cornbread (but if you do it’s fine by me). So what DO I do? I drink Diet Dr Pepper. I’m cool with that. 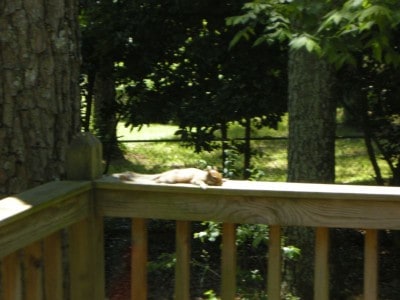 This is the dangdest thing I ever saw 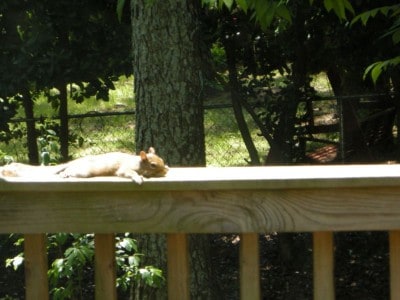 It wasn’t dead. It was sunnin’. Flat on it’s belly, all sprawled out.

I think old Bountiful has been sharin’ a few too many pecans with old Henry.

(Henry is the name of all of our squirrels)

Wait, I had a point somewhere. Oh, yeah.. 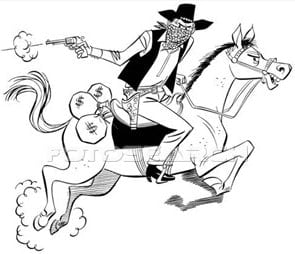 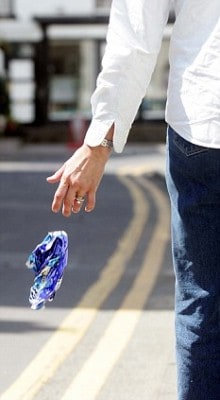 and people who curse excessively (there used to be a picture of Gordan Ramsay here). 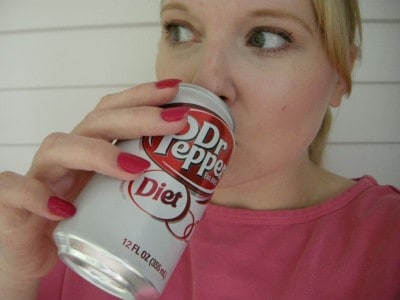 Then there is me drinking my Diet Dr Pepper (A one a day habit by the way).

Anyone tells you otherwise, tell ’em I said to get off m’tractor.

Dude, your Waste Not, Want Not French Toast is almost done…. 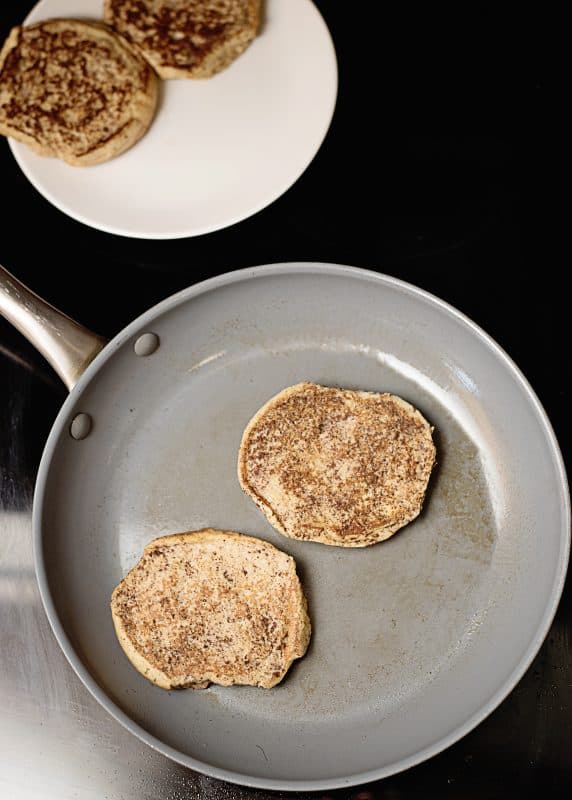 Cook over medium heat until browned on both sides. This will just take a few minutes on each side.

This is awful. It tastes bad, its horrible. Tell everyone in your house that as they salivate so you can keep it all to yourself!

~grins with a mischievous twinkle in her eye~ 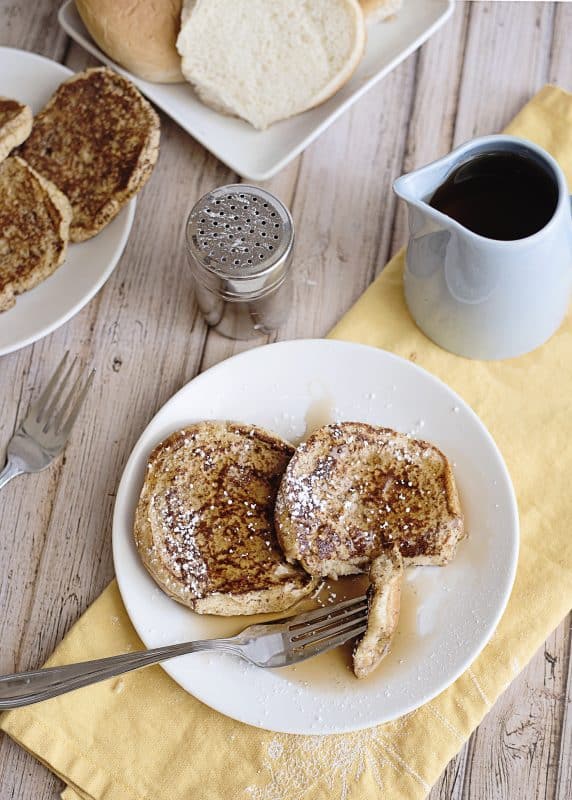 OOh, this is so bad!

You don’t wanna eat it!

~slides the plate over to you as her face softens~

Have at it, I’ll fix ya some coffee to go with your delicious Waste Not, Want Not French Toast. 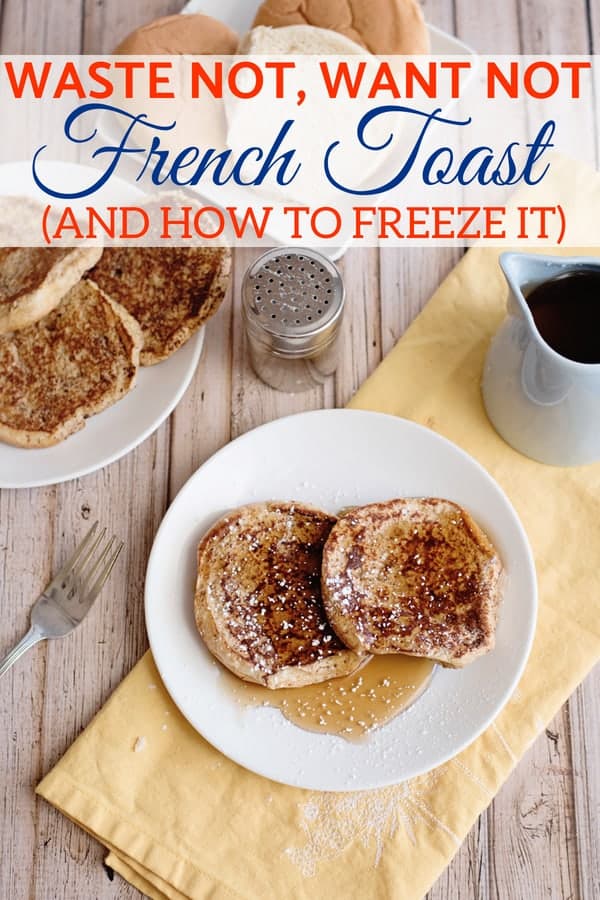 Waste Not, Want Not French Toast

To freeze: Place freshly cooked french toast (which has been cooked all of the way) on waxed paper lined baking sheets and put in the freezer. when frozen, remove from sheets and place in gallon sized zipper bags. Store in freezer.
When ready to serve, put each slice in toaster and run for two cycles, or until heated through and crispy again.

Click here to see my other favorite recipe for leftover buns!

“May you be the kind of person your dog thinks you are.”

I despise wasted food, grew up on a farm with 8 siblings and times were tough. But, my blessed Mom could make casseroles with a lot of leftover breads and biscuits and maybe a single squirrel. Her meals were delicious. My folks raised nine healthy kids on next to nothing. And this wasn’t during the Depression, this was the’ ’50s & ”60s in rural Indiana.
To this day, I never waste food. I save all leftover bread, buns, etc in a bag in the freezer. I used bread crumbs in meatloaf (ehich my hubby loves!), make breakfast casseroles with bread, sausage, eggs and cheese, make croutons, and yes, I make French toast out of leftover hot dog & hamburger buns.
So many people would be better off and not complaining about being poor if they would just utilize what a lot of people throw away.
And don’t even let me get started on the food that people leave on their plate at restaurants. We always take home leftovers and ‘recycle’ them.!

I just found you and I’m sure glad I did. You’re hilarious and witty and the recipe sounds great. Like so many others who commented, we use our left over buns for garlic bread, but will now try them for french toast.
Thanks

I am so glad you found me too Barb, I look forward to getting to know you and can’t wait to see how you like the french toast!! Welcome to Southern Plate!!!

My mom always used old buns for garlic toast/bread, you slather them with butter and top with garlic powder. Toast in the oven and enjoy! You can also top with a little mozzarella cheese for more yum. I now make them and so do my boys…. waste not…
Love your posts!❤️

We do that sometimes too, makes the best garlic bread!!

What a great idea–I have some Hawaiian burger buns left over and they’ll be delish as French Toast! Christy, I have a Diet CHERRY Dr. Pepper habit. If you’ve never tried it before, I can highly recommend it. One a day cranks my tractor!

🙂 those Hawaiian buns are going to be delicious in this recipe!!

Love this recipe! We live veg French Toast and I hate to waste food too.

I never comment but I just love your sunbathing squirrel!

My mom used to occasionally make french toast with leftover buns. Yummy! Of course, we also sometimes had our burgers on toast or our hot dog wrapped in a slice of bread…..

I am so glad you commented Janna!! It is nice hearing from you 🙂
We also had hitdogs wrapped in a slice of bread and hamburgers on whatever we could find. Those were the days!!

Great idea ! I used buns for my grandson when I forgot to get bread for his french toast. After that, he always asked for french toast with my “special bread”. He was too young to even realize I used buns! I am not one to waste anything and it usually pays off in many ways !