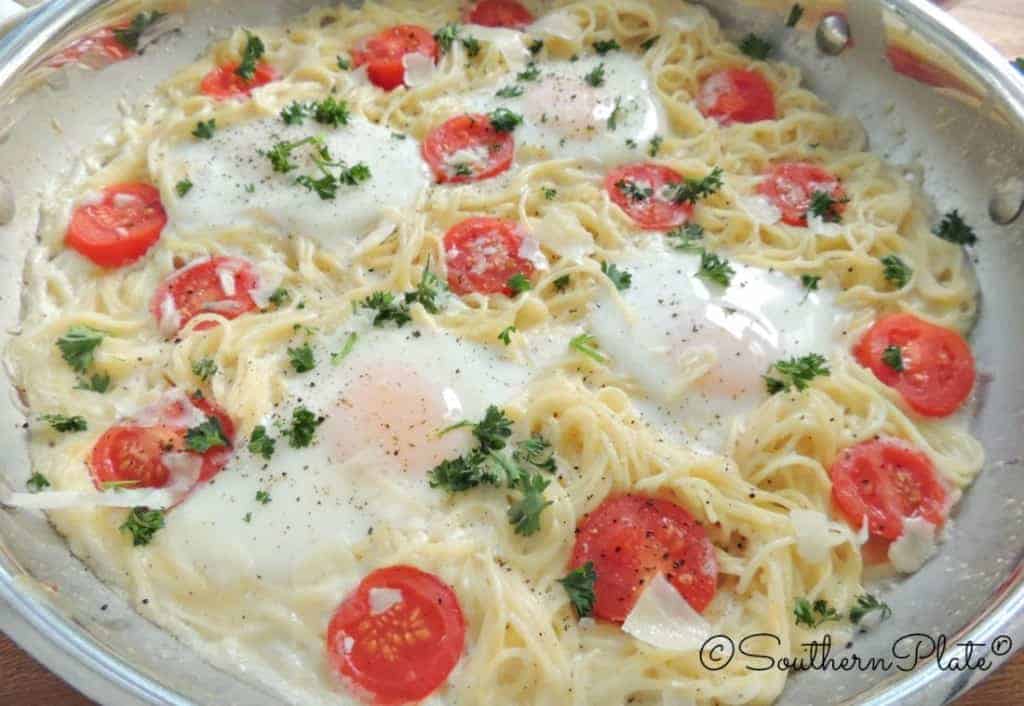 The printable recipe for this Egg and Pasta Bake is at the bottom of this post.

I’ve started to feel older lately. Not old as in age, mind you, although some days I certainly do. Old is a state of mind. I have known people in their eighties who were younger than thirty year olds so I know better than to attribute it to a minor thing like age. What I’m talking about is that chasm that widens at some points, between us and the generations who came after we did.

It happens somewhat naturally when you have a teenager who is into computer programming as a hobby. Brady often starts speaking and I literally have no idea what he is talking about. He might as well be speaking Latin (which he sometimes does as well, just to throw me I think) for all I know.

But that is my kid and I’m used to it. What I’m not used to is other people’s kids, however “grown” they may be.

So this past week my husband and I found ourselves in one of our cell phone provider’s stores. We had a few questions about a new tablet with some technology we aren’t familiar with, as well as some new phone plans that can save us money.

We got paired up with a kid, who is probably legally an adult, but not quite at the age where he is actually hoeing his own row so to speak.

He was a very intelligent kid and the way he spouted off techno-speak reminded us of our son.

We asked him to explain this new phone plan to us, which somehow cuts our bill by over 30%. We knew it was a good deal but weren’t quite grasping where the catch was (there is always a catch and we wanted to see it coming).

So this kid starts talking, a mile a minute. The thing that trips me up about these kids is that, just like my son, they don’t really speak with a Southern accent. Now, don’t get me wrong, I’m not knocking the accent or lack thereof, but a Southern accent tends to slow things down a bit in conversation and folks who grew up around Southern accents are used to having a few extra seconds to digest what is being said because it takes longer to get out.

With these kids nowadays, it’s like you have to learn to speed listen or something.

So this kid starts explaining and I’m sure he did a great job, but we missed half of what he said because his words were so fast that the last of the sentence seemed to be said right on top of the first of the sentence.

When he was finished, I looked at my husband and was glad to see by his double blink that it wasn’t just me.

My husband said “Okay, now let me get this straight.” and proceeded to try to explain back to the kid what he understood so far.

The kid, God love him. I’m sure he is a wonderful kid and was raised by kind people with good hearts and all of that. I’m so sure of this that we didn’t leave the store when he looked straight at my husband, who was about to drop a considerable amount of money on a new device, and said with an exasperated sigh usually only reserved for people who brought you into the world (and therefore are less inclined to bring you out):

Ricky looked away from the kid, cranked his head to the side a bit, and tensed his jaw. I stepped in and said “Wow! We’re not used to hearing people talk like that to us outside of our teenager. He really is a lot like Brady, don’t you think Ricky?”

I tried to make light of it, reminding Ricky that this was somebody’s kid and obviously he had the information straight in his head, he just had a problem realizing that he wasn’t presenting it so it could be straight in other people’s heads as well.

Ricky took a breath and I gave the kid a motherly smile. He had the sense to back down and say “I’m sorry, let me get some paper and a pen and I’ll write it out for you while I explain”

I now think kids in prehistoric times started writing on cave walls just so their older, outdated parents could understand what they were trying to say. On another note, I couldn’t help but be impressed that this child of the new millennium still knew how to be proficient with such ancient devices as paper and a pen.

He recovered well. We bought a new device and changed both of our phone plans and actually left the store understanding how and why it would save us money. And feeling that great chasm grow larger than it has ever been for us.

That kid really saw us as old.

The next day, I got an email with the subject line “Do you want to feel 20 again?”. I have no idea what it was selling but I just sat there and looked at the subject line a moment without opening it. My own younger years flashed through my mind. For me, they were years that lacked wisdom, stability, a sense of direction. I didn’t know who I was or who I wanted to be, much less where I was headed, things that are well understood at this point in my life. I didn’t have any of the grounding I do now.

And then I looked at this email asking me if I wanted to feel 20 again.

“Not on your life.” I replied, hitting delete as I shut my computer and walked back into the kitchen.

Today’s recipe is one of those clean out the fridge or pantry, last ditch meals before you go grocery shopping type suppers. It’s also good for folks who just want to cut down on meat in order to squeeze the grocery bill a little bit tighter. 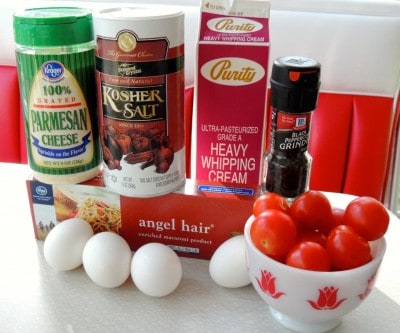 Ingredients are easy on this and can be changed based on what you have on hand or what you prefer. I am using the less expensive parmesan cheese, angel hair pasta (or spaghetti) kosher salt, heavy cream, fresh black pepper, cherry tomatoes, eggs, and a little bit of  butter (it camera shy).

Heavy cream is expensive but I keep it on hand for my coffee lately. If you don’t have any, you can substitute whole milk or a can of evaporated milk. Evaporated milk would be my choice because it has that nice rich flavor to it. Also, in place of the tomatoes feel free to use any vegetables you have lingering about. 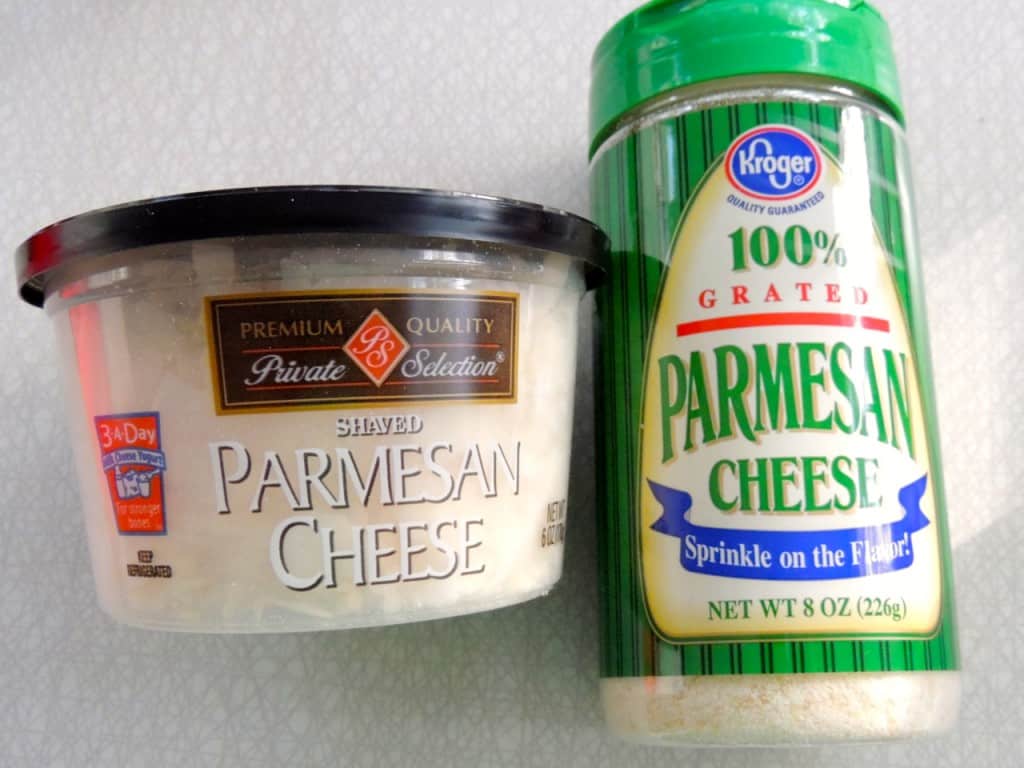 Here are the two main types of parmesan you are likely to have.

Either works just fine in this recipe so buy what you can afford or use what you have and don’t look back. 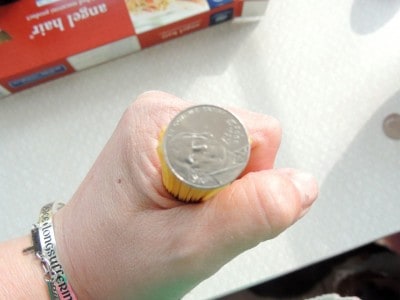 Let’s talk about pasta. Used to, folks would say that a stack of spaghetti about the size of a quarter is one serving. For me, personally, I have found that it is about the size of a nickel in my family. I’m using roughly three servings worth of pasta in this recipe.

Cook that according to package directions. 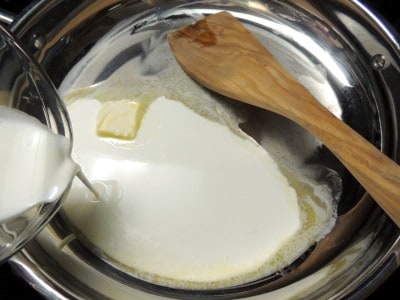 While that is cooking, melt about 2 tablespoons of butter in a large skillet over medium heat. 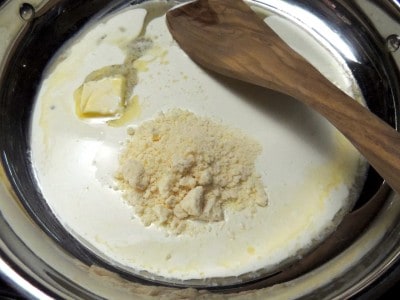 Add Parm and stir that in a bit. 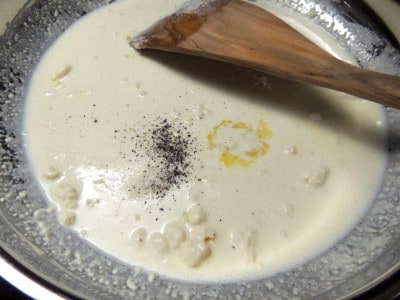 Add some salt and pepper to taste.

A little garlic powder would be really great here, too, as well as any herbs you like. 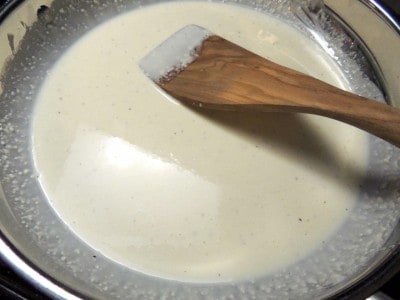 Stir that up and continue cooking over medium heat until it is smooth. 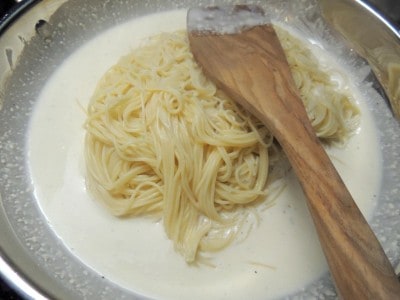 Add in cooked and drained pasta. 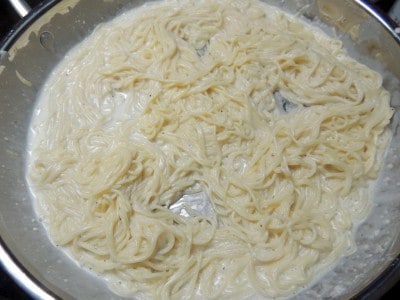 Stir that in until it is coated and then make a nest for every egg you plan on using. 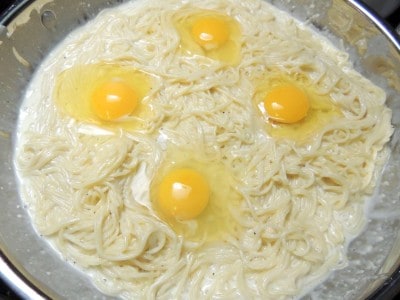 Crack your eggs into the little nesting spots. 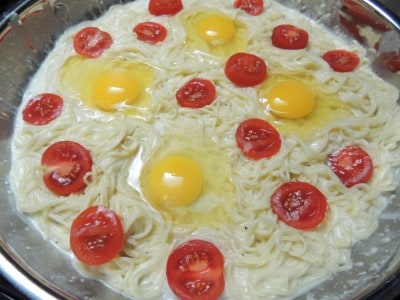 Half your cherry tomatoes and put them on the top.

If you’re not using cherry tomatoes you can just sprinkle your veggies over the top or you could have stirred them into the pasta before you added your eggs. 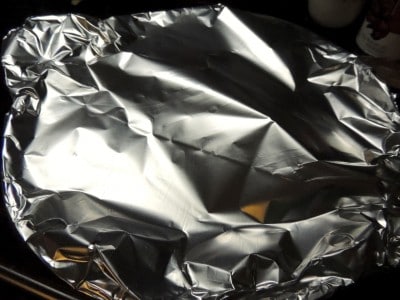 At around 15 my eggs are over well (not runny in the middle). 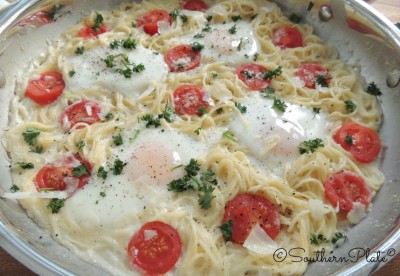 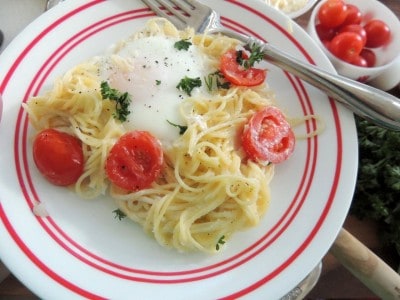 Remove from oven and sprinkle with more parmesan if you like.

I also added some fresh parsley to pretty it up a bit (plus, I like parsley).

HAVE A WONDERFUL DAY and remember, if you have food in your pantry and a roof over your head, you are more blessed than many people ever dream of being. 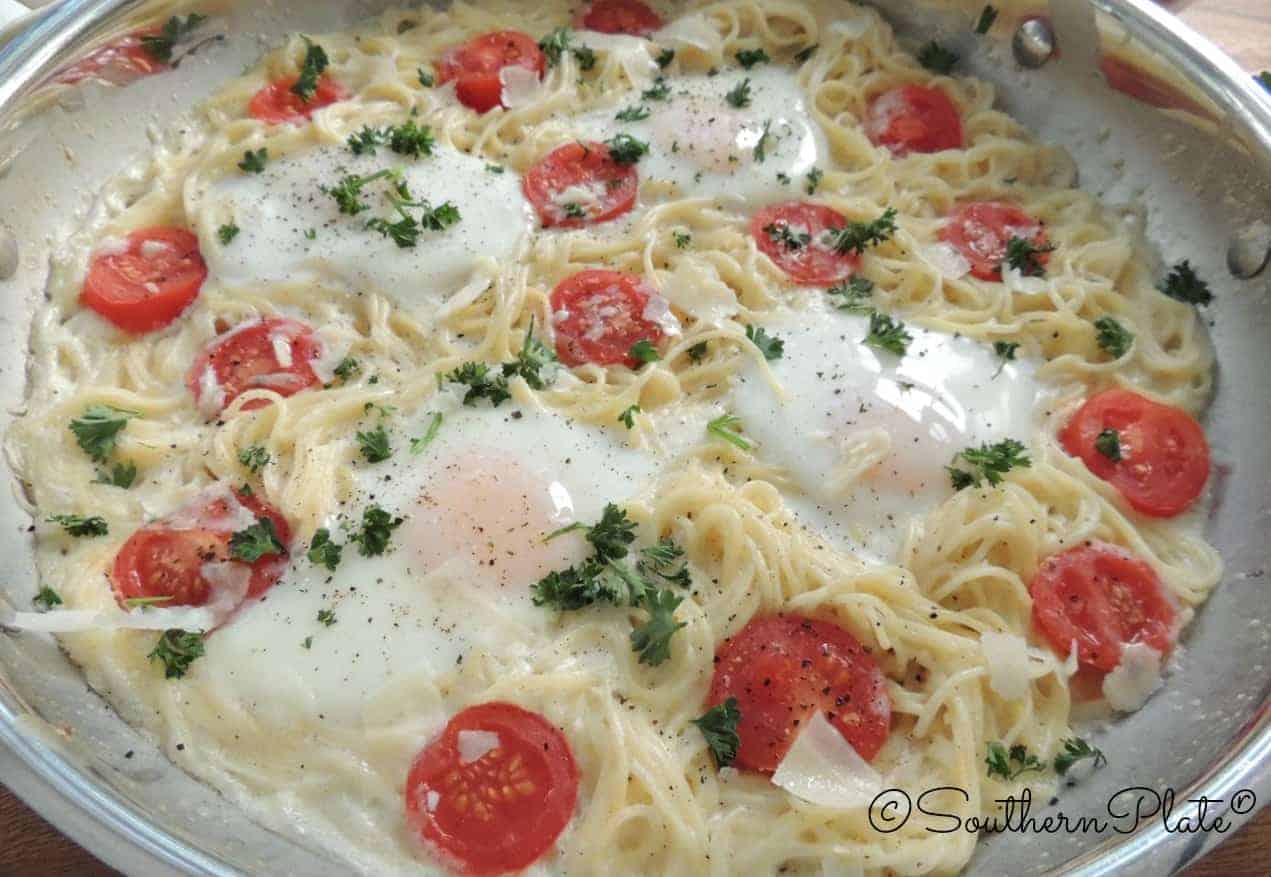 Egg and Pasta Bake – and the Joy of being “old”

This is an easy recipe to adapt. Use whatever vegetables you have, milk instead of cream, and customize with seasonings of your choice.

If you want more sauce, double the milk, butter, and cream.

“Continuous effort – not strength or intelligence – is the key to unlocking our potential.”

Your story is oh so familiar and it reminds me of when I went to Verizon for an iphone. I just knew it was going to be a fight before I even walked in. Sso a guy asked to help me. I told him I was interested in a phone but I wanted someone to help me that had plenty of time and patience to teach me s-l-o-w-l-y from A-Z. That same guy helped me and did well. I can text and everything now!!! But I hate the thought of him thinking that I’m stupid, but at least he didn’t show it. Gotta go text now 🙂

🙂 I am glad you were able to find someone to take their time and show you the in’s and out’s!! Those are hard to come by!

Delicious comfort food, Thanks so much!

I made this last night for Sunday supper and beat the eggs before adding them to the pasta nests. We had it with crusty rolls and a salad. This dish has so many possibilities. I will make it again and use up whatever is in the pantry. Love that!

Hey Christy: I liked the story, and I’m not surprised what the kid said to you. I work at a Tag Agency in Oklahoma, which is basically our version of a DMV. I hear my co-workers talk to our customers all the time like that and I just cringe. Sometimes they even talk to me like that! I just try to remember to always be kind whenever possible and to treat people how I feel that Jesus would have.

This dish looks so pretty and sounds good too. Almost like an alfredo sauce if you use the garlic. Going to have to try this. 🙂

The SouthernPlate Staff
Author
Reply to  Jayson in Oklahoma

Oh my, the Tag Office. I bet you see all kinds 🙂 I hope you get to try the Egg and Pasta Bake soon Jayson!!