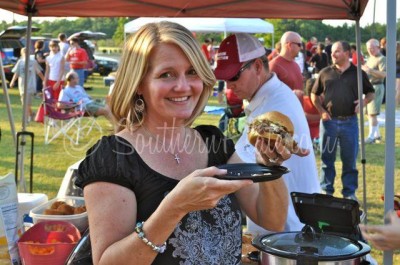 I hope you all had a great Labor Day weekend! We decided to hit the road and spend the extra few days with the Georgia Jordans and just got back in last night. The kids really enjoyed playing with cousins and grandparents and the hubs and I enjoyed sitting around visiting. Okay, so I might have gotten a wee little bit of shopping in, too, but the North Georgia Premium Outlets just say my name so sweetly that whenever I am near it is hard to refuse.

We left out on Friday around lunch and decided to take backroads in order to avoid the perpetual traffic jam just outside of Chattanooga. Note: We love everything about Chattanooga. It is one of THE most family friendly places on earth and we dearly love to visit there every chance we get. But seriously, there is almost always a traffic jam just outside of it. So you can either hang on to your bladders and hope you get through in an hour or so, or you can go through Mentone :).

We had gone through Mentone a few months ago and discovered the cutest little place called the Wildflower Cafe. We actually passed it the first go around but turned around to go back and have lunch there. It was so good that we stopped again on this trip. If you are ever in Mentone and have any room at all for some good food in your stomach, go to the Wildflower. Order anything at all on the menu and you’ll be happy, but you simply must try the tomato pie. It is to die for. While we were sitting there I told hubs that if I ever had a restaurant, I’d want it to be just like this one, but with a little less descriptive naming on the menu. Don’t get me wrong, the menu is divine and very well written. I think I’d just got a bit more common sense and down to earth because that is more my style. If I had a restaurant (which I definitely do not have time for) my menu would read something like this:

As we headed out of Mentone on the little winding mountain road, our road trip bliss was interrupted with a very sudden WHOMP WHOMP WHOMP WHOMP. You got it folks, we have us a flat. 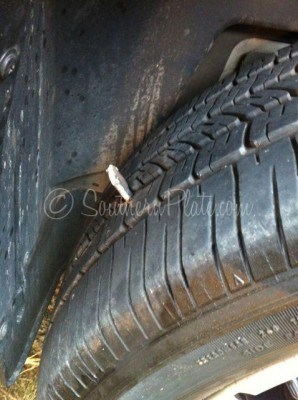 This is how our tire looked. When we get a flat, we don’t halfway do it! 😉

Thank goodness there was no one behind us as we pulled over to the side of the road. It was far too busy a road to be able to change the tire on but we were able to move into a nearby driveway and safely get started. I went up to the house in hopes of apologizing and explaining what had happened, and also to assure the owner that we’d be gone as soon as we possibly could. As I knocked I heard some noise inside but no one answered so I went back to the car to help change it. We both immediately got on our phones to look up where the jack was, how to get the tire down from under the car, etc. By the time he had the tire released I knew exactly where to safely insert the jack to raise up the car and we were off to the races. Isn’t internet a wonderful thing? (Our car didn’t come with an owner’s manual, but we have google)

About that time two teenage boys appeared from inside the house and stood staring at us from a distance so I smiled and approached them to explain what had happened. They leaned on their father’s tow truck (which I had previously viewed as a sign Ricky might have more help than me with the tire) and said “Yeah, thats what our dad said probably happened.” I apologized for us being in their driveway and they said “Well, good luck with the tire” and turned to disappear back into the house.

Looks like Ricky had me as his trusty assistant after all. That lucky dog…

It took us about 45 minutes to get the tire off and the spare on before we were on our way again but I couldn’t help but be grateful that Ricky’s head was just where mine was when I said “There is no telling what us having that flat tire just protected us from” he replied “Yeah, I was just thinking the same thing.”

Oh, wanna see what it was we ran over? Here ya go… 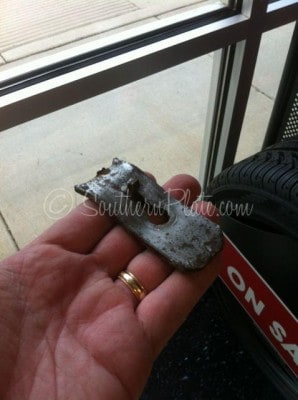 Whooooweeee Dawgie! See what I mean about not halfway doing it?

Most folks would be content to run over a nail or screw or something. We had this entire thing embedded in the tire except for the last inch or so. Call us overachievers 🙂

Now let’s make some Italian Beef Sandwiches. These are SUPER easy and I took them to our tailgate last week. They stayed nice and warm in the slow cooker until everyone was ready to eat and we really enjoyed them. But they’d also make a great weeknight supper or game day meal at the house and leftovers heat up like a dream

You hungry yet? Lets get on in that kitchen and cook us up some grub! 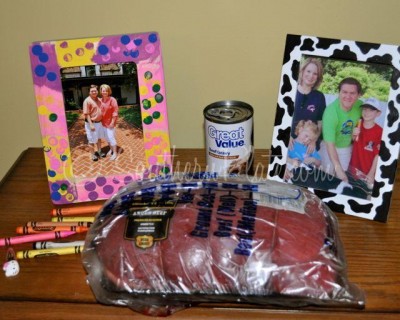 I get bored taking ingredient photos in the same places all the time so today I took my ingredients into the living room. This is what my mantle looks like now. Okay, so I don’t really have a *real* fireplace but I’ve always wanted one so a few years back I saved up and we got an electric fireplace. It still puts out heat and has a beautiful fire look to it, but it’s not real. I’m cool with that though, I have a good imagination and someplace to hang the kid’s stockings on Christmas Eve :).

I had it all decorated at one time and it was actually pretty, too, but time and kids tend to redecorate your house and that isn’t always a bad thing. Ours is much more colorful now :). So here is my beef roast and can of beef gravy posing on my makeshift mantle with some painted picture frames, crayons, and a hello kitty hair barrette. 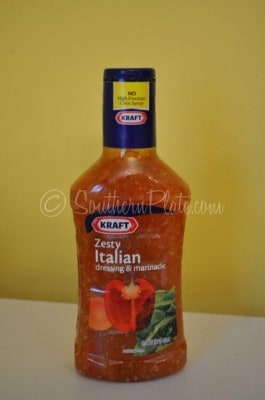 Pretend you see those here. You’ll see them in a few pictures but they were kinda camera shy so I couldn’t really get a photo of them until I had cut them up and removed their will 🙂

I say “1-2” bottles of dressing and “1-2 bell peppers” because it really depends on how much you like them and how much flavor you want from them. Me? I could drink a bottle of Italian dressing and eat every bell pepper you put in front of me. I only used one bottle in this but I sometimes add another half bottle or so just to up the zingy flavor. 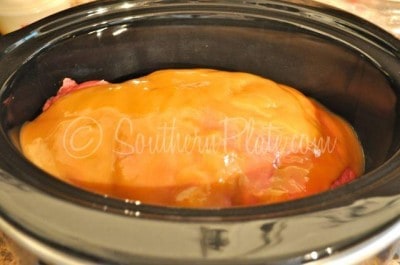 Place your beef roast in a slow cooker (my favorite kitchen appliance!) and cover with can of beef gravy.

* Note that you are not using your Italian Dressing now. 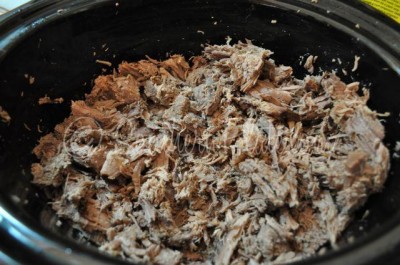 After it has cooked all day, remove the roast, drain off and discard all juices, shred the meat and return to the slow cooker. 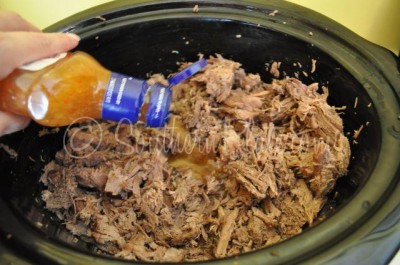 Add in entire bottle of Zesty Italian Dressing and give it a good stir. 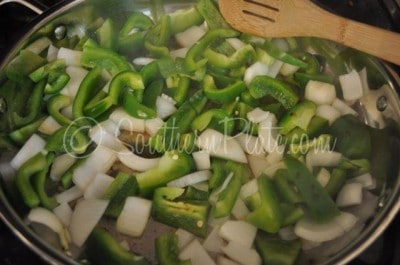 Chop up your onion and bell pepper and place in a skillet over medium high heat to brown slightly, until your onions are caramelized and your bell pepper is tender.

I don’t add anything to this but if your skillets tend to stick, you might want to add a tablespoon or so of cooking oil before adding in your veggies. 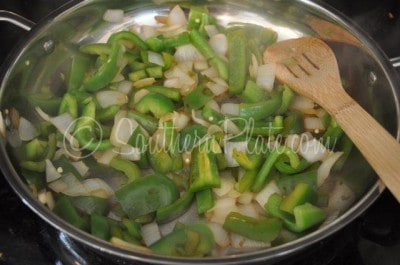 and cook it until you get tired of fooling with them and want to get on with things. 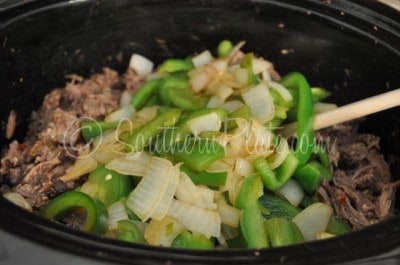 Add them in with your beef and give it a good stir. 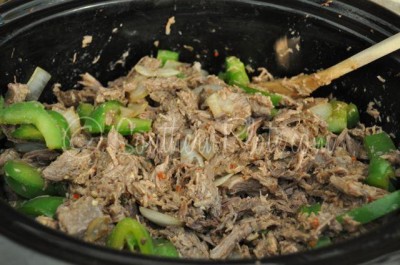 Place slow cooker on warm setting until ready to serve.

Special thanks to my friend, Tammy, for modeling the sandwich for me! 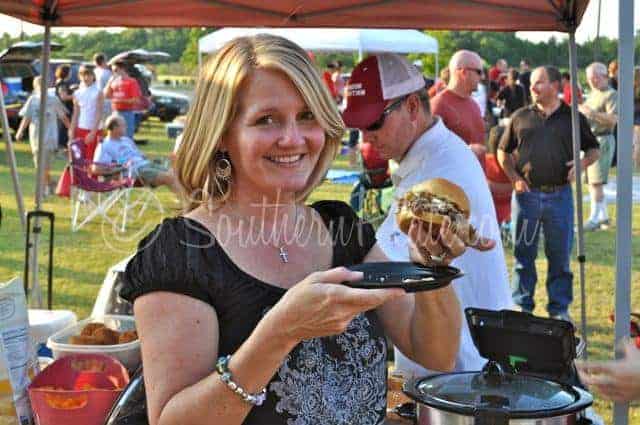 I like to start each day with a positive or uplifting message on our Facebook page each morning – and I sure do hope you’ll join us over there if you haven’t already! Today’s message bears repeating so I’m adding it here, too!

I had to Google the town. What an interesting place and cafe. http://www.mentonewildflower.com/

Debbie I. from NC

Just made these and they are absolutely to die for! Thank you so much Christy! I LOVE Southern plate and follow you on FB, as well as subscribe to your e-mails. You are such a joy andI have loved every recipe I’ve tried!

The SouthernPlate Staff
Author
Reply to  Debbie I. from NC

Oh my goodness, thank you so much Debbie!!!! I appreciate all of your support and am so glad to hear you are enjoying the recipes!

Christy, i just came back from BECOMING & had the priviledge of attending your seminar (on friday night. I’m the despearate mom/wife/business owner who asked if i could use the ‘back-up meals’ as our everyday meals… Lol) Thank you so much for the much-needed motivation & encouragement; putting dinner on the table everynight now seems like a closer reality rather than a far-off dream… Lol. Anyway, now that i am home, pinning your recipes like crazy & getting my ‘game plan’ together before the craziness starts back next week, i was wondering if/how you would go about freezing any leftovers from this recipe and then preparing those leftovers (from frozen) when we’re ready to eat them.
Thanks again… If the only Becoming seminar i went to was your’s, the trip still would’ve been worth every penny!

I would just throw it in a freezer bag and freeze, then to have for another meal you can either thaw it and heat in the microwave or in a saucepan on the stove top, or you could put it back in the slow cooker until heated through.

Sarah
Reply to  The SouthernPlate Staff

Christy, I have made and enjoyed this recipe so many times, but had to find a way to make it gluten free because my husband has celiac disease. It was so simple — just substitute an equal amount of gluten free beef broth for the beef gravy and you can’t tell the difference. Of course, you have to use gluten free bread or buns for the gluten free folks, but that is an easy change. Thanks for this wonderful and easy recipe. My grandchildren just rave about the sandwiches!

I am so glad to hear that you were able to make it work and thank you so much for sharing your tip with other readers who may have gluten problems.

Your “adventures” are starting to scare me!! :/ You need less excitement in your travels!! (Or maybe I do!!!) lol I’m glad it all ended with a “happily ever tailgate!!” 😉 With the excitement of football madness in the air, I look forward to your delicious recipes to warm the bellies of all!!! 😀