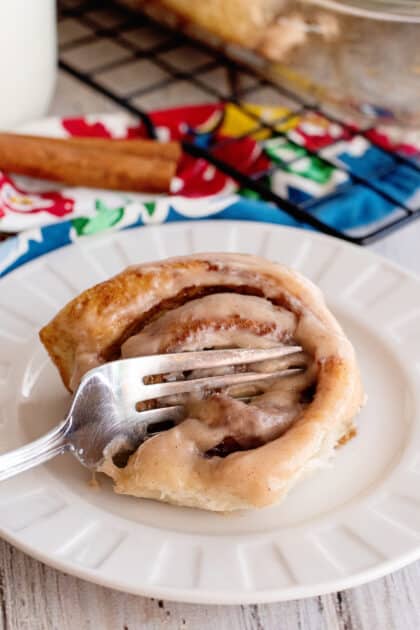 These easy homemade cinnamon rolls have power behind them… real power. You could pretty much get anything you wanted if you showed up toting a plate of these warm cinnamon rolls with cream cheese icing oozing down the side. You can use them as wonderful gifts of gratitude and tokens of caring.

I especially love that I can make these ahead of time and put them in the fridge to pop in the oven first thing in the morning, which makes your gifts of gratitude and tokens of caring even easier to provide!

I have been making these cinnamon rolls for years, but only in the past few have I started using this shortcut method that involves no yeast so no proofing or kneading. While it’s fun to make the dough from scratch (see recipe for cinnamon roll dough from scratch below), it’s much more time-consuming and not that easy on your hands. Using store-bought bread dough as opposed to making your own makes this homemade cinnamon roll recipe super easy for anyone to make, regardless of experience in the kitchen.

Besides the dough, all you need is butter, cinnamon, cream cheese, brown sugar, and confectioner’s sugar. I can’t wait for you to try these cinnamon rolls. There’s just something about the combination of soft warm bread, cinnamon sugar, and sweet creamy icing that I, for one, can’t get enough of. Are you ready to give this recipe a go? 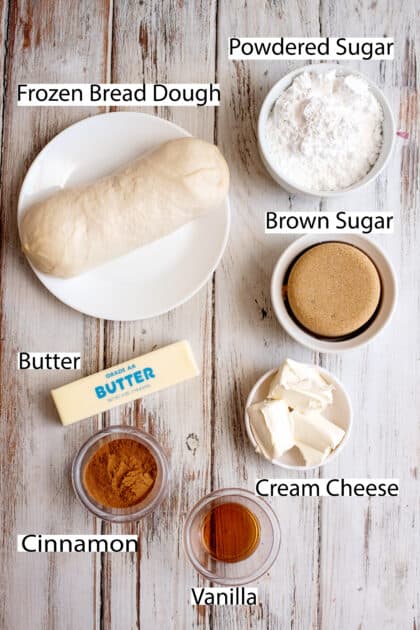 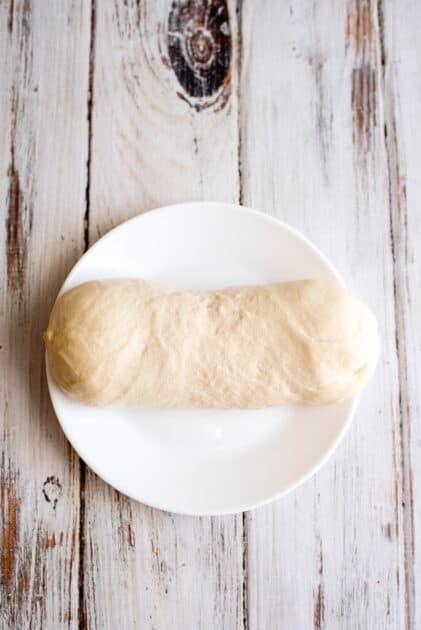 Get out one loaf of frozen bread dough and sit it on a plate at room temperature to thaw. This will probably take about an hour.

Just go check on it now and then and poke it a bit to see if it is still frozen in the center. We need it completely thawed because we’re gonna take our rolling pin and put some elbow grease into flattening and stretching that puppy out! 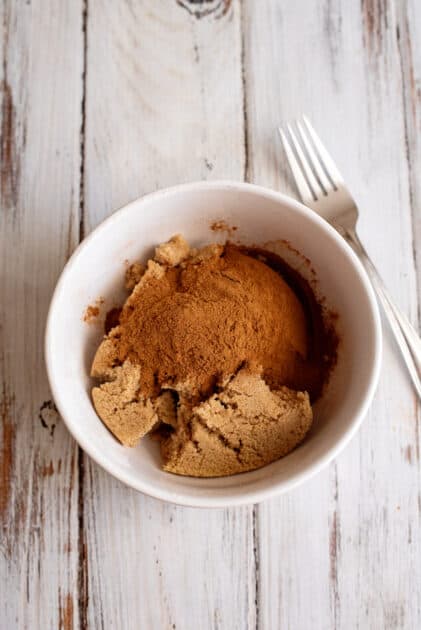 In a small bowl, place brown sugar and cinnamon and mix them together. 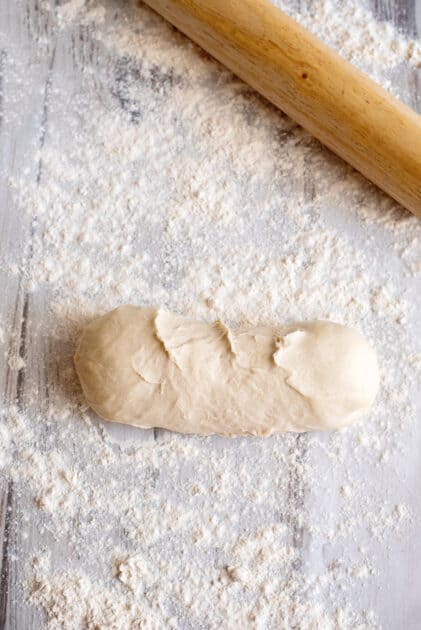 I always roll out a bit of waxed paper to do this on for easy clean-up. 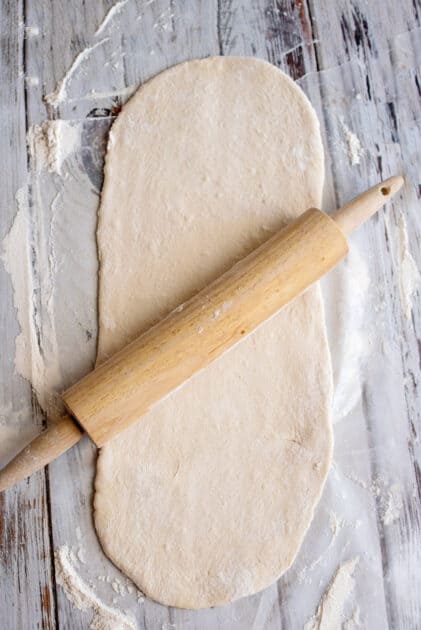 Now, putting some elbow grease into this, roll out the dough.

What dimensions should you roll it out to?

Now, my original cinnamon roll recipe called for it to be rolled out to about 16×21 but that was when I was making the dough from scratch. When I use a loaf of dough, I roll it out to about 9×16. It comes out just the same but you just don’t have as many spirals to your cinnamon rolls. 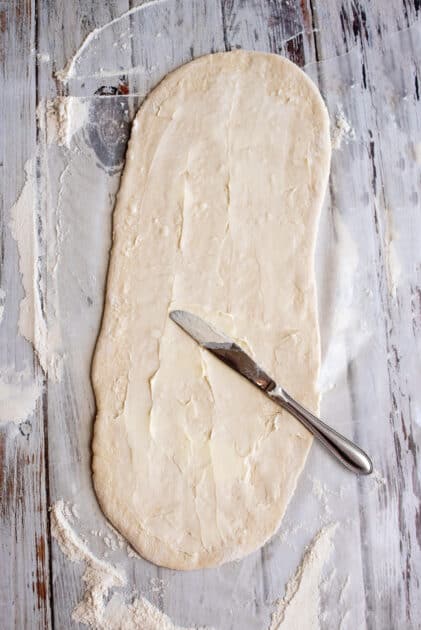 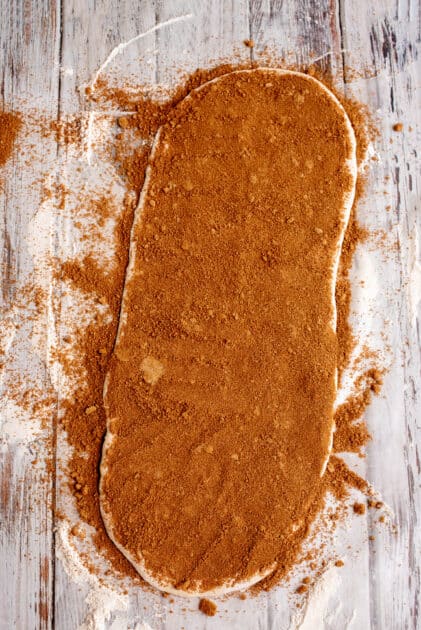 Sprinkle your brown sugar mixture over it and pat down lightly. 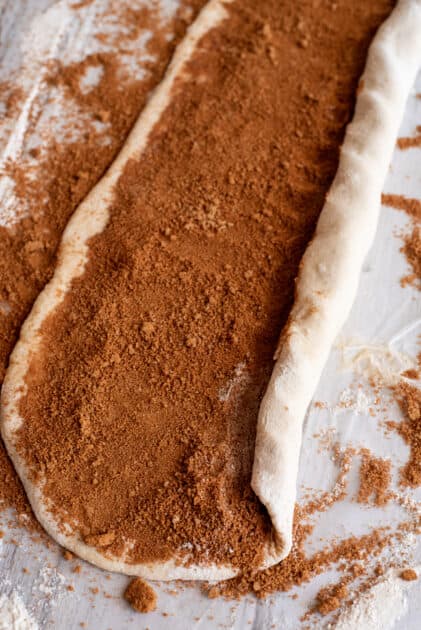 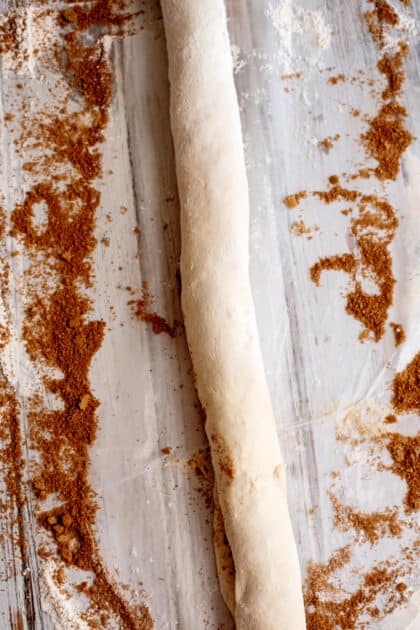 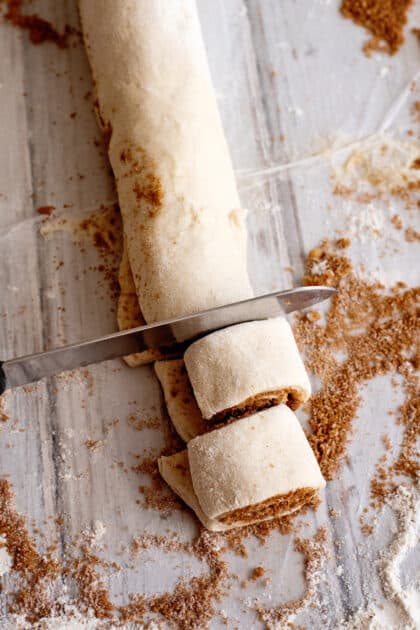 Using a serrated knife (because that is what works best for me, but if you prefer some other type feel free) cut one-inch slices all down your log. 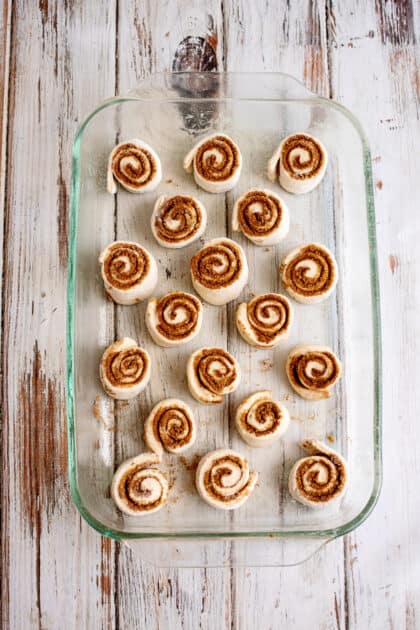 Place the slices in a greased 9×13 baking dish. 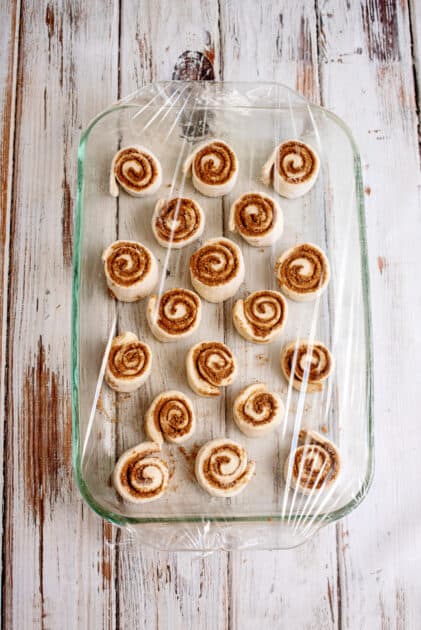 Cover the uncooked cinnamon rolls with cling wrap and place them in a warm place to rise until doubled in size. This can take anywhere from two to four hours, depending on the temperature.

How to find a place for the dough to rise

In summer, I sat them outside on my deck and they were done in 1.5 hours. But in winter, I get creative and set them on top of the washing machine while I dry my clothes in the dryer nearby.

Another option is to put them in the refrigerator and let them rise overnight. They will rise much more slowly in the fridge, so get up about an hour before you want to bake them because you may need to sit them on the counter for about an hour to let them finish rising. 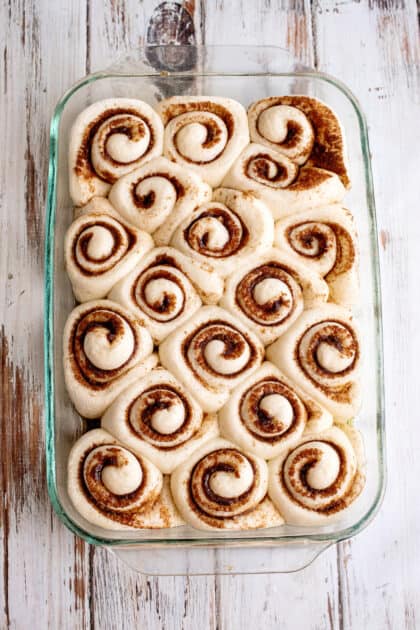 Now remove cling wrap and bake at 400 for 15 minutes or until golden brown. 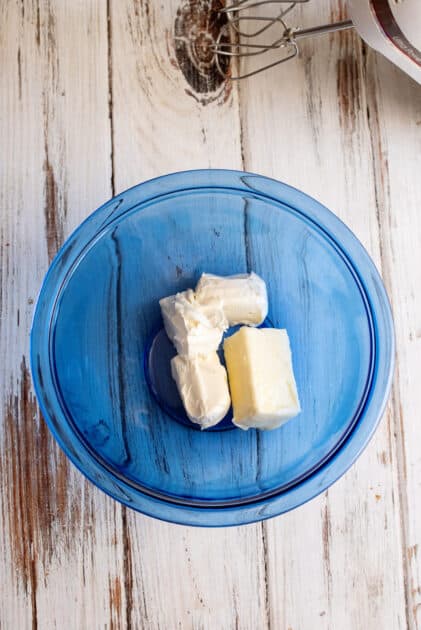 How To Make The Cinnamon Roll Icing

Place the cream cheese and the remaining butter in a mixing bowl. 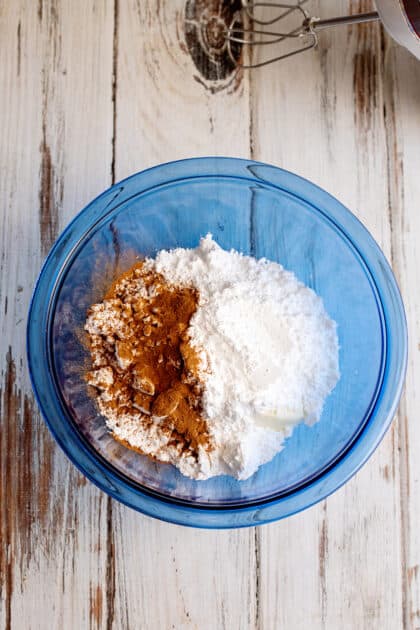 The cinnamon gives your icing a bit of oomph! 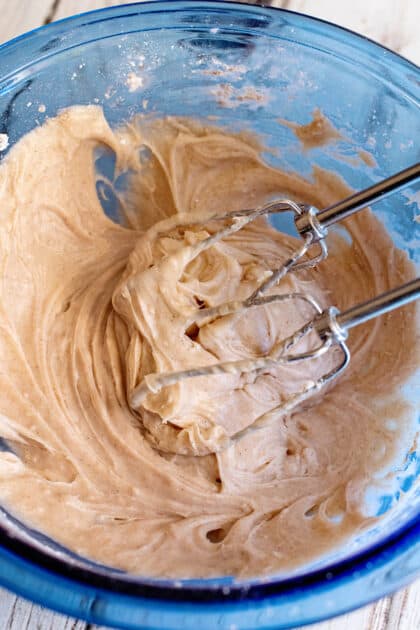 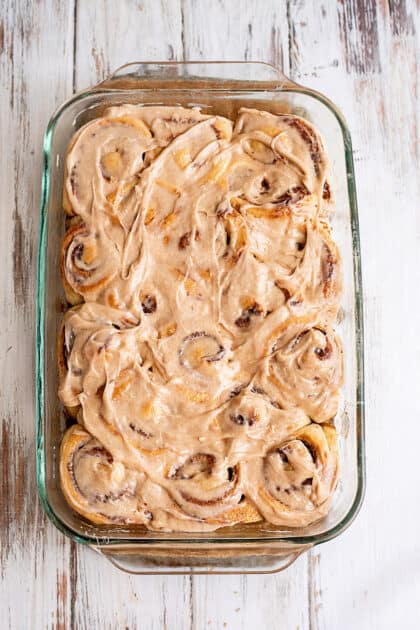 Now if I am serving these rolls right out of the oven I let my family and guests ice them on their own. But if I am taking them someplace I ice them myself. Whatever you do is perfectly fine! 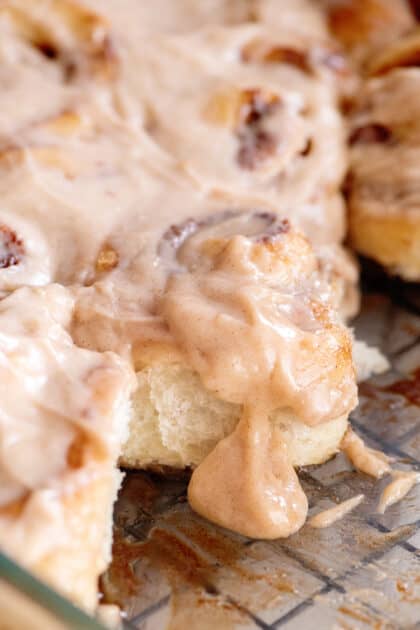 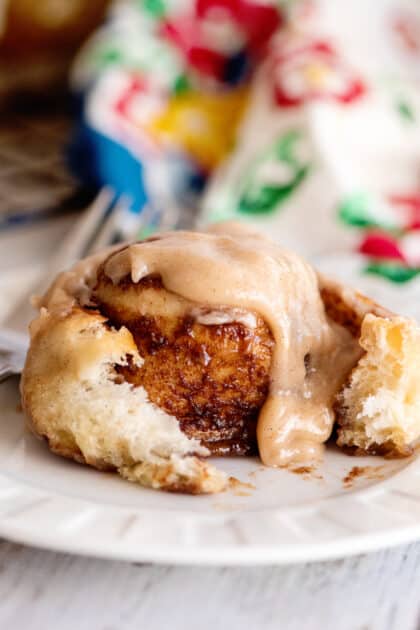 These heat up well, too. You can make them for dessert after dinner and then heat them up for breakfast in the morning. Delicious!

How do you make cinnamon roll dough from scratch?

This dough replaces the frozen loaf of bread dough. Use the rest of the recipe as written above.

Place all of the dough ingredients into the pan of your bread machine in the order listed. Program the machine for dough or manual and press start. After about 10 minutes, check the dough’s consistency. It should be smooth, not too sticky, and not too dry. Adjust its consistency with additional flour or water if necessary to allow the machine to complete the kneading.

If not using a bread machine: combine all of the dough ingredients in a large mixing bowl and stir until the mixture becomes cohesive. Transfer to a lightly oiled work surface and knead by hand for five to eight minutes or until it is smooth.

Place kneaded dough in a lightly oiled bowl and turn to grease on all sides. Cover the bowl with plastic wrap and let it rise in a warm place for one hour, until it’s nearly doubled. Transfer to a floured work surface and roll into a 16×21-inch rectangle. Spread with 1/2 stick of margarine and sprinkle with cinnamon/sugar mixture. Complete using the recipe above.

Check out these other cinnamon-spiced recipes: 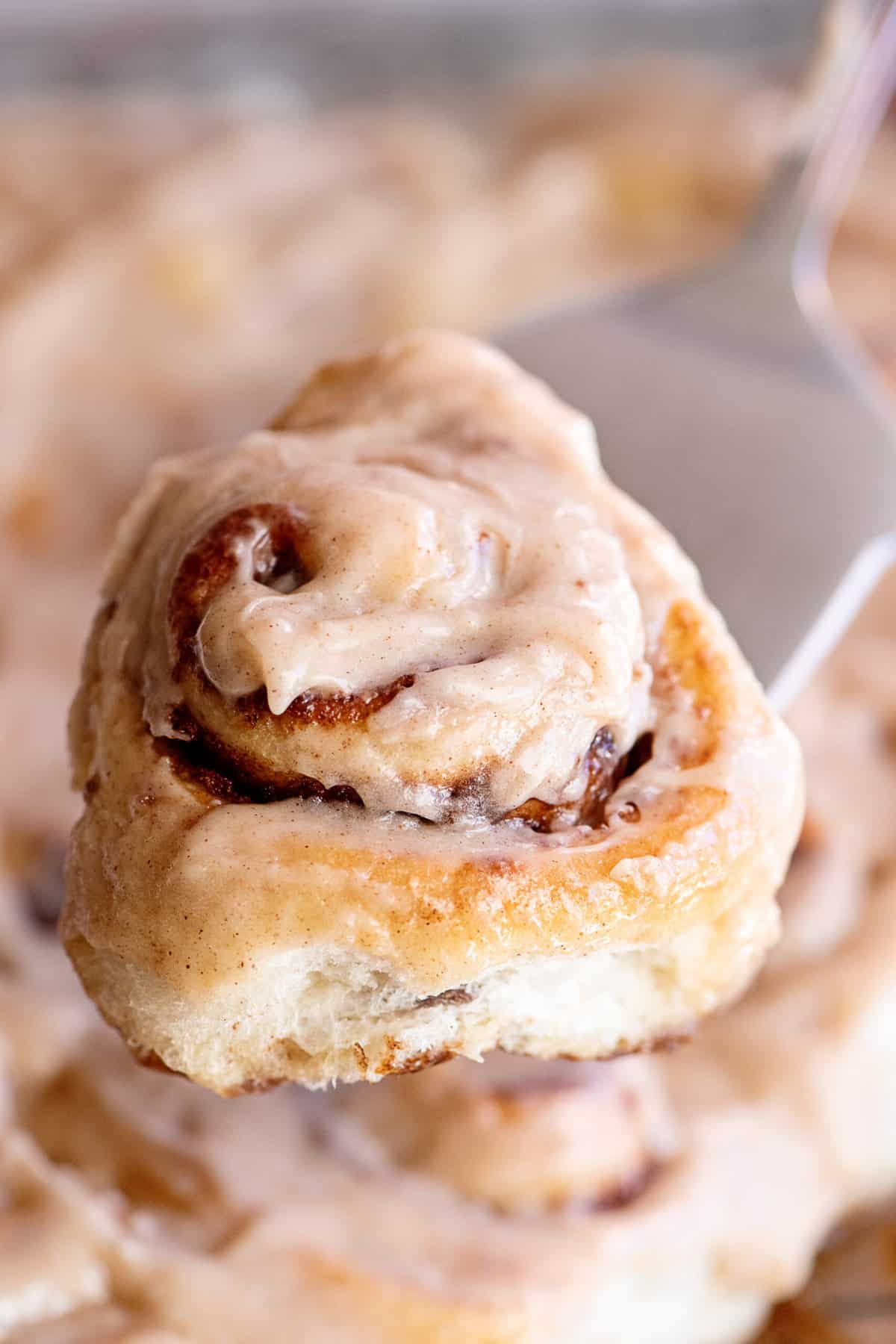 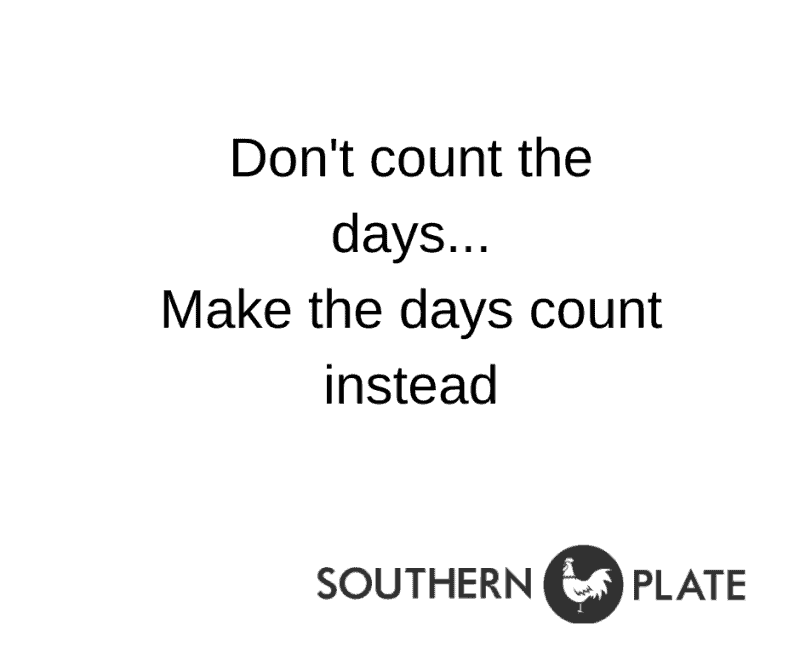 Thank you for helping me be a confident cook. Every one of your recipes I try turn out great and so easy. Merry Christmas!!

PLEASE HELP!!! I have tried making these a few times but they have never risen!!! I have put them on the stove top or on the island across from the stove (heated to 200* and door open) but nothing. Is it me or the frozen dough????

It’s definitely your bread dough. Are you just letting it thaw once and then proceeding? Are you getting the dough from the same place each time? What brand is it?
We’ll figure this out!

Its the Rhoads (sp) frozen bread usually from Walmart but occasionally from Homeland. I attempted the cinnamon rolls again this weekend AND made a loaf of bread just to see if it would rise. It did after several hours but only a few of the cinnamon rolls tried to rise. Could I be overworking the dough when rolling it out? I’d love to make big fluffy cinnamon rolls for the family instead of cinnamon hockey pucks!

Being obsessed with the Dukes is no problem, they were actually mentioned in my Great Aunts Eulogy last week, and she passed away at 95! As were Cheech and Chong, but, that’s a different story. Lol.
Now if only I could channel her to recreate her meatballs! Her secret was mint, apparently not her only secret, I haven’t had meatballs like hers in my life.

MMMmmmmmm! can almost smell these baking!! Can”t wait to try Them!! I just found your site , can’t wait to further explore…

In the visual instruction you say to add cinnamon to the icing for zing. However, I do not find that measurement…only for the filling. I am waiting for mine to rise right now, so I will add to taste. Just thought you might like to amend the recipe. I made the Easy Orange Rolls earlier, they were a huge hit. Over the weekend, the kids and I made AND canned your Crockpot Apple Butter. It is AAAAAMAZING! Thank you so much for this site, it brings back so many memories of my Great Grandmother and me cooking together.

I just add to taste myself Krystal but I will make a note to put that into the recipe. I am so glad to hear that you and the kids liked the apple butter and Easy Orange Rolls!!!

I love when they rise together and have soft gooey edges! Yum!

I just live reading your posts! I have a strong feeling thay we could have one heck of a good time on a big porch with a pitcher of tea or lemonade and maybe a snack for the afternoon. Thanks for whay sounds like another great reciepe!

When you said elbow grease, you weren’t kidding!! LOL Can’t wait to taste these yummy treats.