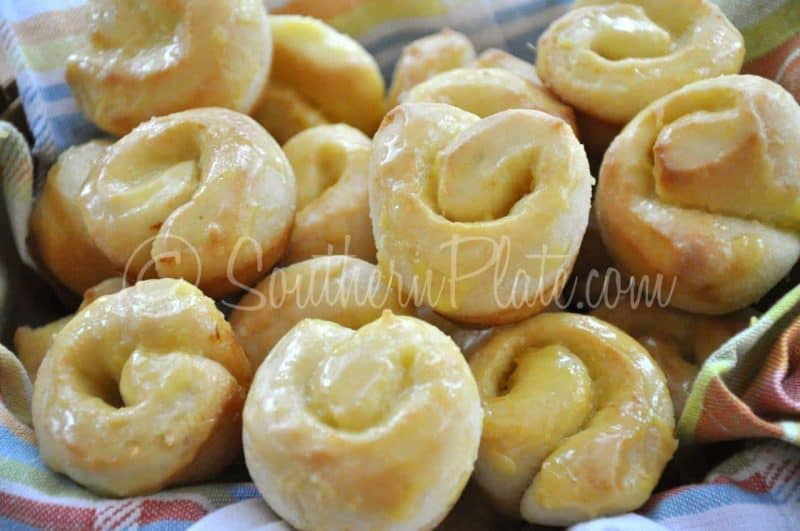 We are going to get to those delicious and gorgeous Easy Orange Rolls but first… Do you have those moments in your life that, no matter if they happened twenty, thirty, or fifty years ago, they can be called upon at a moment’s notice and replayed in your mind as if they were only yesterday? Last week while I was filming on the set of Beat The Chefs, I had one of those moments when I walked outside of the studio and looked up at the moon.

I was on the tail end of a two week filming session consisting of twelve+ hour days working with some of the most wonderful people you could ever encounter. I’m blessed on many levels but most importantly, I’m blessed because I have the wisdom to realize and see my blessings around me. That is a key factor that a lot of people miss.

But I missed my family something fierce, so much so that my heart was just in a constant state of aching.

I looked up at the moon and went back in time.

It was a night just like that one, a moon just like the one I was seeing. My great grandmother  had called me out to join her in the driveway. “Come ‘ere Christy” she said. “I want you to look up at this moon.” I stepped out onto the smooth cool concrete in my bare feet and looked up at her. Her face was weathered from a lifetime of hard work and caring for her family. There was that usual hint of a smile around the corners of her mouth and that little twinkle in her eyes that made you feel she knew something you didn’t. Her countenance was made all the more beautiful by hair the color of the moon’s glow and wrinkles from smiles dating back to 1902.

I followed her gaze up to the tilted crescent moon. “That’s my favorite moon” she said. “When it’s a layin’ on it’s back like that it looks like it’s restin’ “. Her lips curled up into a smile as she looked down to make sure I was looking up as she spoke. “Always did like to step out and look at the moon when it was like that.”

Lela had lived a hard life, with years of working in the cotton fields and many times having to provide for her four kids on her own. Long hard days had given her strength that even advanced age couldn’t take away, and here she was, looking up and admiring the resting moon. I could just imagine how much it meant to her, when her back was nigh on breaking from picking cotton, to be able to find solace in knowing that even the moon got to rest sometimes.

The sky in Alabama is darker than it is in Los Angeles. The sky all those years ago was deep as pitch and the moon and stars were so bright they lit your path wherever you wanted to go, providing far more light than street lamps along city streets. Lela was wearing her dark blue house coat, just like the one of hers that I have neatly folded and tucked away in a box of treasures, that still has her smell of rose scented lotion and vita moist face cream. She smiled up at the moon in a way that made me think she was stepping back to another moment, just like I do when I think of that night and find myself standing under the carport with her and stepping to the edge to gaze up at the moon at her insistence that I do so.

I like it when it’s resting like that too, Lela. And thank you for giving me a little of home as I looked at it again through your eyes. We’re never as far from home as we think we are.

So today, I’m home. Back where I belong. With that in mind, it’s time to get cooking again, something I have been doing all weekend. Oh how I missed having my kitchen! Today’s recipe is a small and dainty orange roll. They are somewhat like cinnamon rolls in their concept but not much like them at all in taste. Alabama has a few places that are known for their orange rolls, served alongside your lunch plate or placed upon  your table in baskets, and I’ve never even tried any of those. Yes, I am probably the only person in Alabama who has never eaten at All Steak in Cullman – but I never did say I was well traveled. Given the chance to go or stay, I generally choose stay whenever possible 🙂 It’s not that I’m a homebody, it’s just that I realize how blessed I am to have my home and everyone in it and I need a few lifetimes in order to enjoy it fully.

Here is my simple take on orange rolls and I hope you get to try them soon because they are surprisingly low fuss and supremely divine! 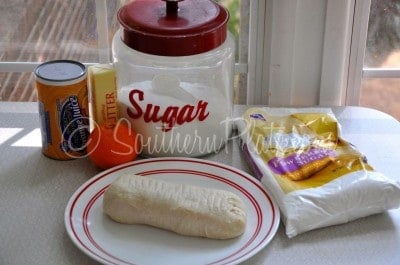 I get my dough at the grocery store in the freezer section. Rhode’s bread dough sells packages of three frozen loafs like this and Kroger has their brand that usually comes in packages of four or five loafs. You need to set this out on a plate, cover, and allow it to thaw completely. 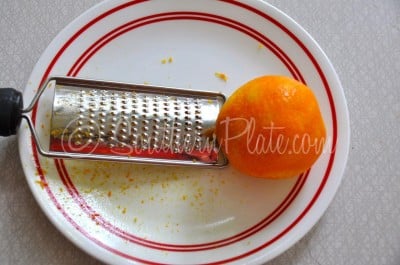 Okay now we need to zest our orange. Whatever kind of orange you have is just fine so don’t worry about that.

I can’t find my zester, though, and I hate digging through the abyss that is my kitchen drawers so I just grabbed this grater thingiemawhosit and it’ll work just fine.

Some folks might tell you not to do this so if they do, just don’t show them this post. I’m a big girl so I can make these executive decisions 🙂 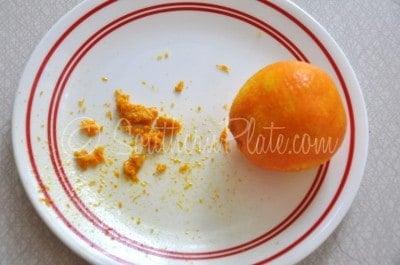 Bada! Orange zest. About a tablespoon. 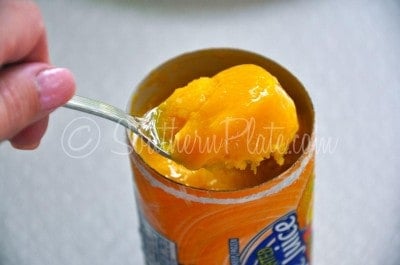 Now get a heaping tablespoon of orange juice concentrate. 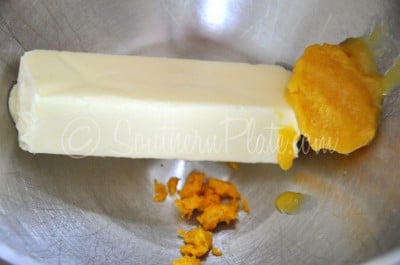 Add all of that in a mixing bowl with your softened butter. 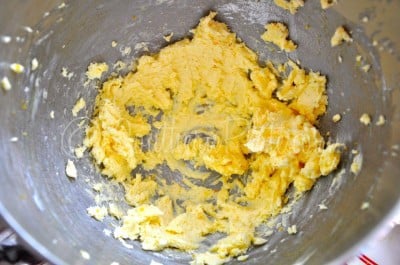 And mix it until it is well combined like this. 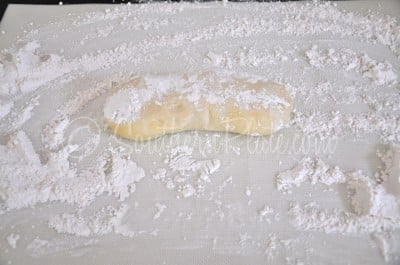 Now take your thawed bread dough and place it on a well floured surface.

It is important that you thaw it.

Roll that out a bit. 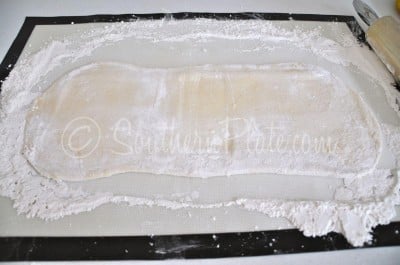 I would estimate that this is about seventeen inches long and six or seven inches tall.

Here is a great tip to rolling out dough:

It will be hard to roll out and take some muscle so I roll it out as best I can and then let it sit for five minutes. This relaxes the dough. After five minutes, finish rolling it out to the size you want it to be and it will be much easier. 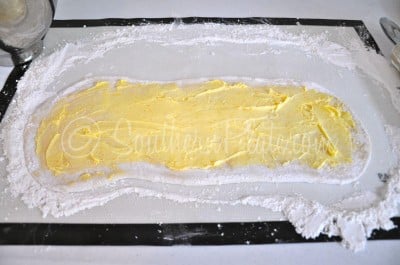 Spread the dough with your orange butter but leave about 1/2 of an inch around the sides.

Sprinkle it with your sugar.

We’re only using 2-3 tablespoons of white sugar here because it doesn’t take much. 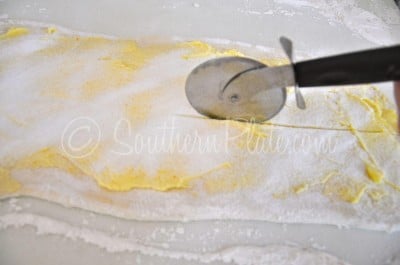 Now, to make our small little orange rolls, take a pizza cutter and cut right down the center of your dough to divide it into two looooonnnnnng skinny rectangles. 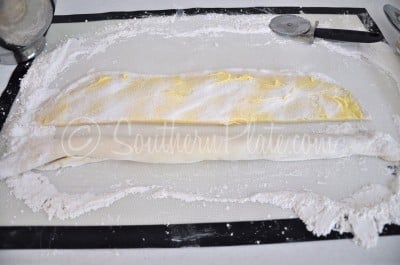 Starting on the inside, roll 1/2 of your dough up into a log and squeeze it together lightly to help it hold. 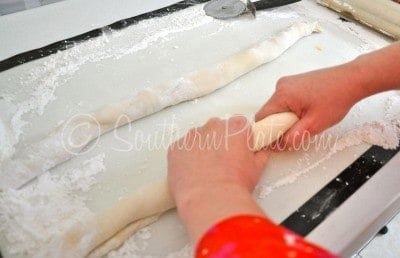 Repeat with the other one. 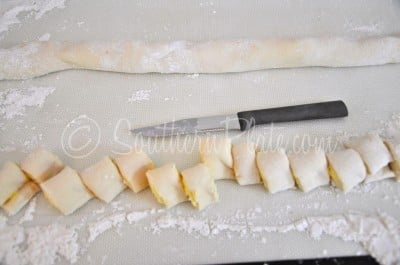 Time to cut! I cut each log into 12 equal sized pieces.

I don’t use the end pieces but if you want to use them, just place them in a separate small baking dish. 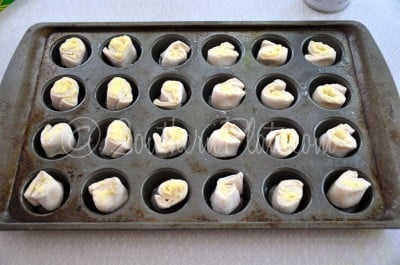 Place one slice into each muffin cup. 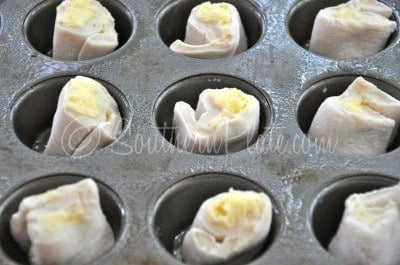 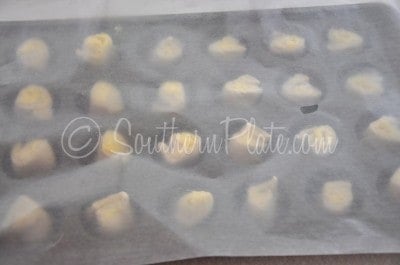 Cover with waxed paper or a cloth towel and allow to rise in a warm place until doubled in size, anywhere from 30 minutes to an hour. 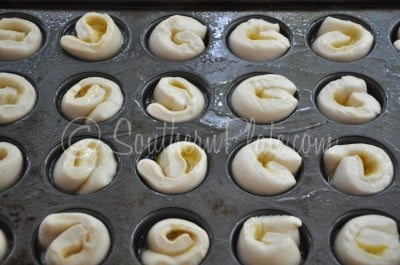 Now bake in a 350 degree oven for 20 minutes or until just lightly browned. 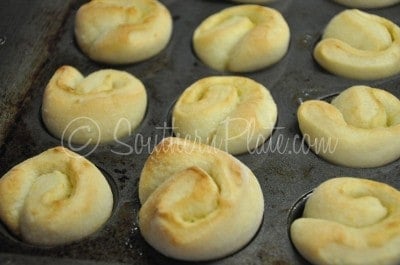 Remove your hot rolls from the oven.

Time to mix up our WONDERMOUS glaze! 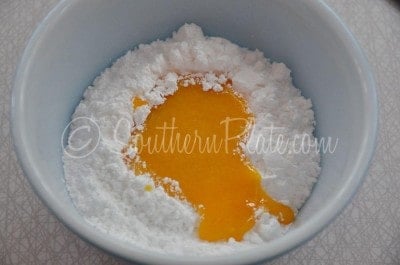 I like to use orange juice concentrate because it gives you that POP of orange flavor that I love so much.

All you need is about a cup of confectioner’s sugar and two to three tablespoons of orange juice concentrate. 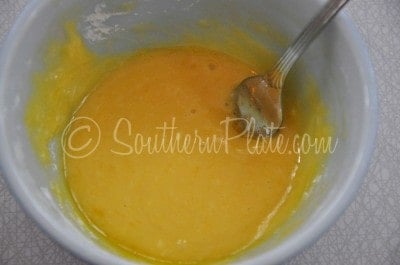 Stir that up until it’s nice and smooth.

You know you wanna taste it. 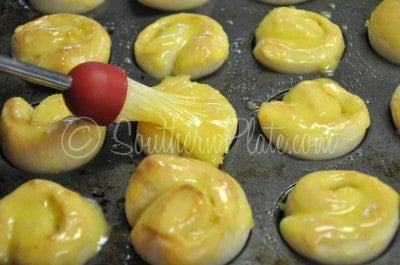 Brush the glaze over your warm orange rolls. 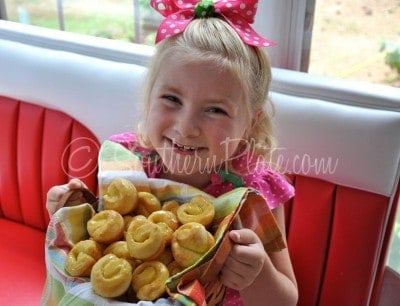 Can you look at this grin and not smile? I sure can’t! 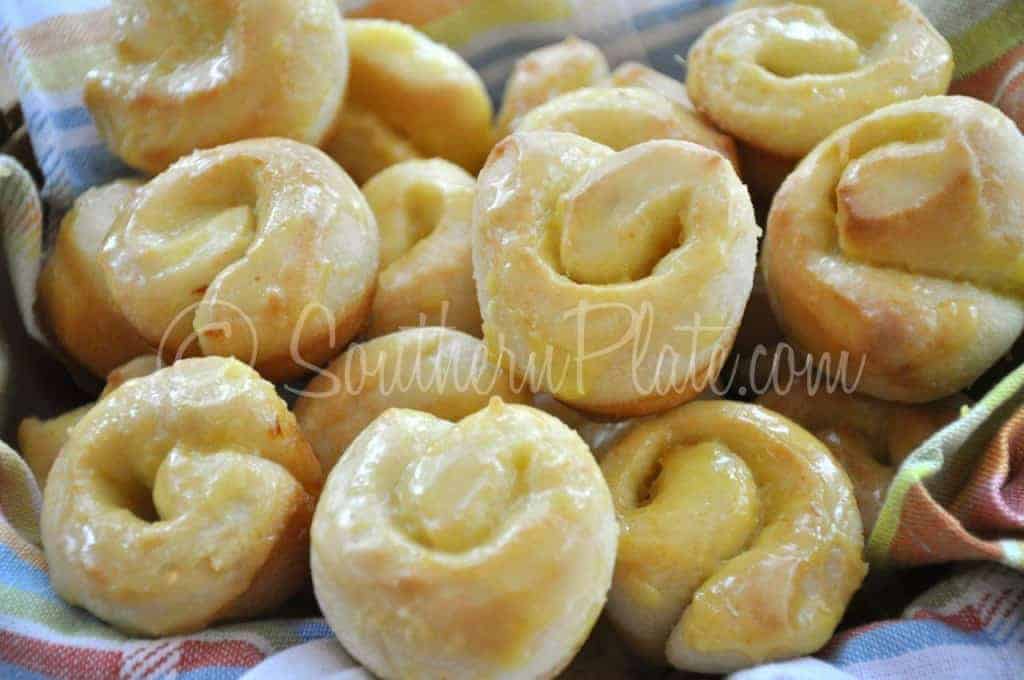 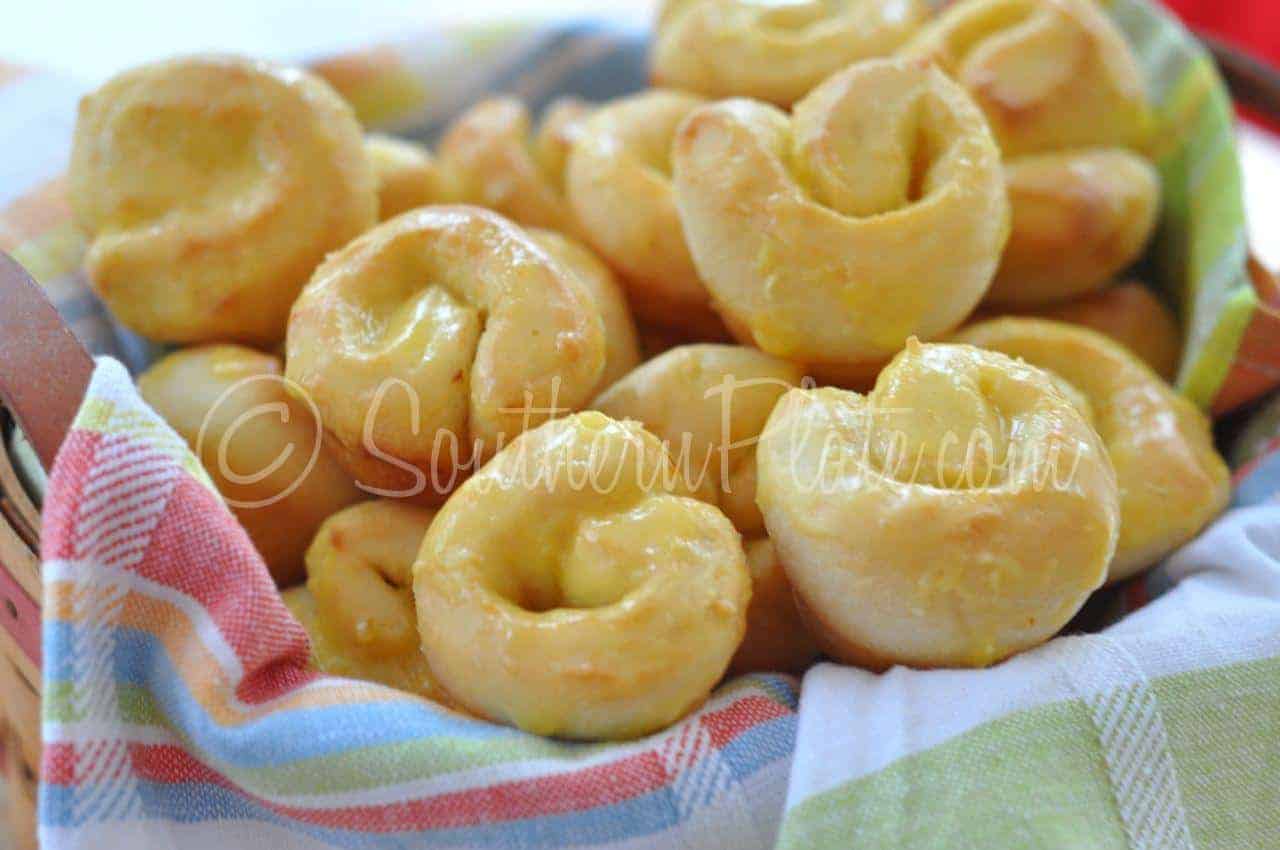 Remaining orange juice can be placed in a zipper seal bag and frozen until the next time you make orange rolls.

I do not think much of a man who is not wiser today than he was yesterday.